Low cost domestic airlines have increased travel and trade the last 10 years between East Malaysians and West Malaysians. Prior to this, the independent states of Sarawak, Sabah and Labuan Island separated by the South China Sea were as foreign to West Malaysians as Vietnam and Laos.

With the ease of travel between these states came the introduction of the unique Borneo food and culture into Klang Valley in particular the street food of Sarawak. Today, we cover several locations which offer some of the best Sarawak noodles originating from this state also known popularly known as ‘The Land of the Hornbill’.

The Sarawak Laksa found in Bangsar Lucky Garden has been touted as the best tasting amongst many food bloggers as well as Sarawakians. We too agree with this title. 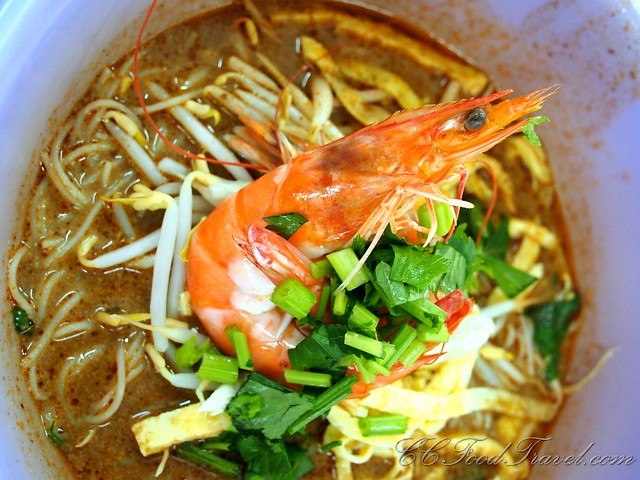 As you can tell from the image above, the large prawns that first greets you as the bowl arrives on your table wins the ‘value for money’ factor. The rich broth is made from a strong pork base which adds a robust dimension to the accompanying curry powder and lime. You can order extra pork knuckles to go with the dish and then your noodles will be a force to be reckoned with.

Ciki having visited Kuching several times, never found the powdery taste of Sarawak Laksa to be an attraction. However, this particular variant of Sarawak Laksa might be the best she has tried herself. It will definitely be the yardstick to compare other Sarawak curry noodles against. 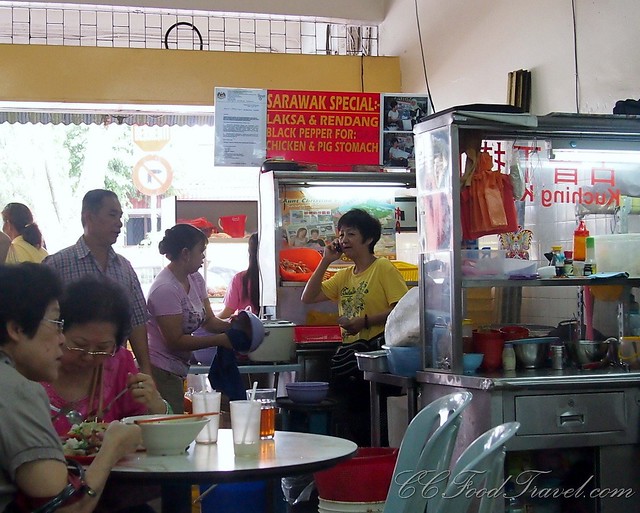 The owner of the stall attending to an order on the phone. Streams of customers place orders throughout the day. We have literally seen this stall become famous throughout the years of operations. 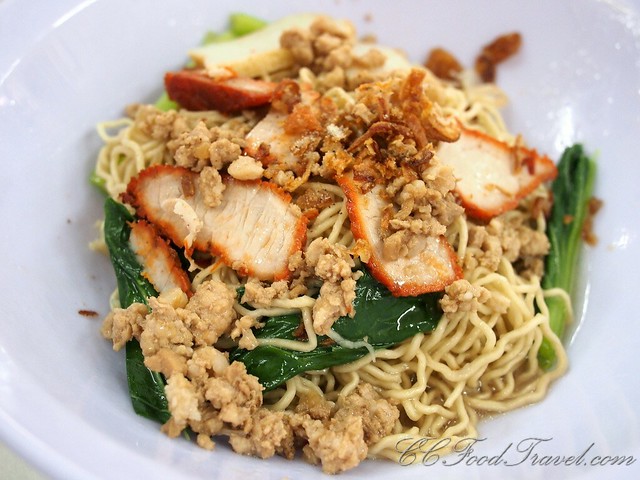 A stall behind this popular Sarawak Laksa in Bangsar offers another ubiquitous Sarawakian dish called Kolo Mee. While the alluring image above may tempt you, the taste to us, was just average. Upon request, Cumi got some BBQ Pork sauce to add the the noodles, and then the taste improved.

Kolo Mee is a simple dish with wriggly, al dente egg noodles tossed in the cook’s secret pork sauce then topped with with mince pork, BBQ pork slices, kai lan vegetable slices and served with slices of pickled green and sometimes red chili. It’s not so hard to make, but getting it right, now that’s a skill that not many possess. Carry on with us, on this trail, as we seek out the ultimate meal in Sarawak noodles.. 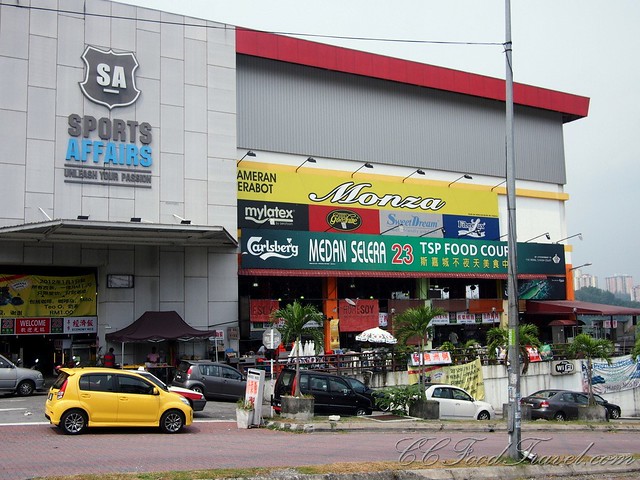 Recommended by a friend that hails from Kuching, the capital city of Sarawak, we really went on a wild ride to find this place. Luckily Cumi can find his way around any city, like an owl in the dark, and all of a sudden inner Cheras was no longer foreign territory. We pulled up to the looming Econsave, to look for the stalls found in this food court, located deep in the Cheras township. This one stall offers Sarawak Laksa, Kolo Mee and Sabah style Chicken Rice and we were pretty excited to try it. 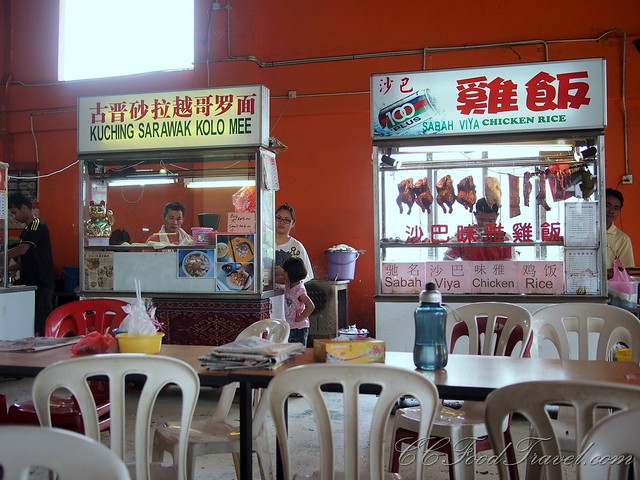 we find the stall and happily place our orders 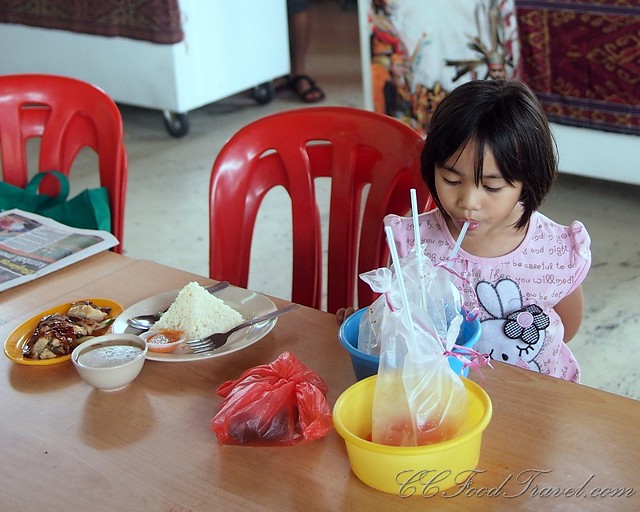 Notice the pyramid shaped chicken rice. We have never seen the pyramid shaped rice when visiting Sabah eateries but we definitely give this stall an ‘A’ for novelty. You rarely see people drinking from plastic bags in plastic bowls these days.. and this girl had three! 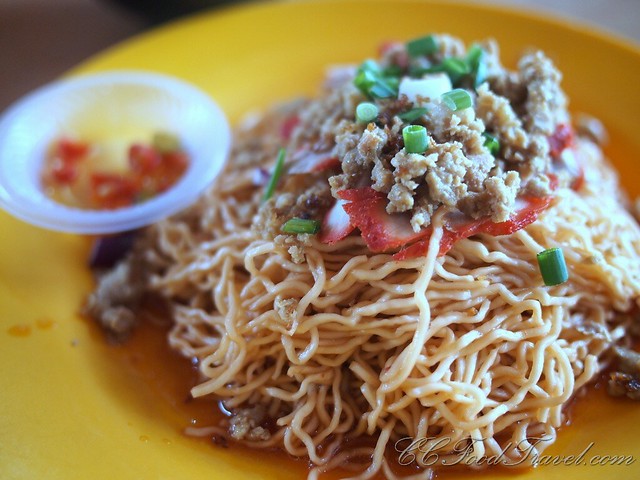 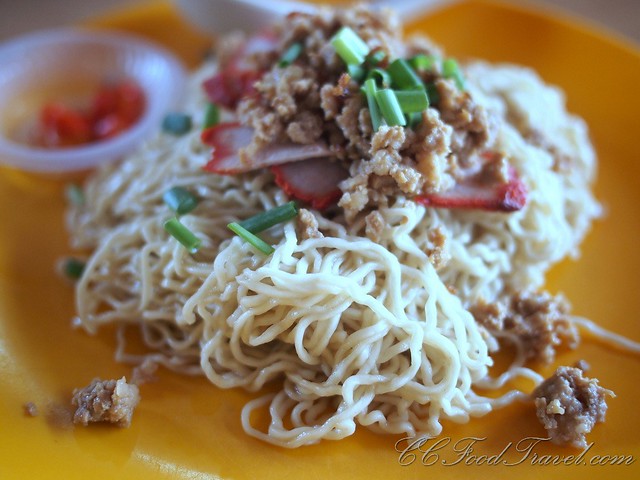 We tried both the plain version and one with the BBQ Pork sauce. Our verdict is that the noodles are definitely above average. 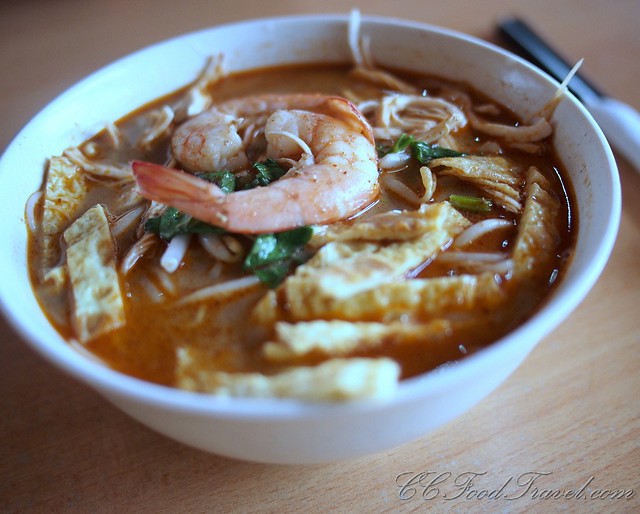 The Sarawak Laksa here is unfortunately, only average tasting. Even Cumi’s friend had warned us about this. Ciki didn’t care for this one much either.

So the march continues to find a good Sarawak laksa… are you still with us? Next up.. the 7th Mile. 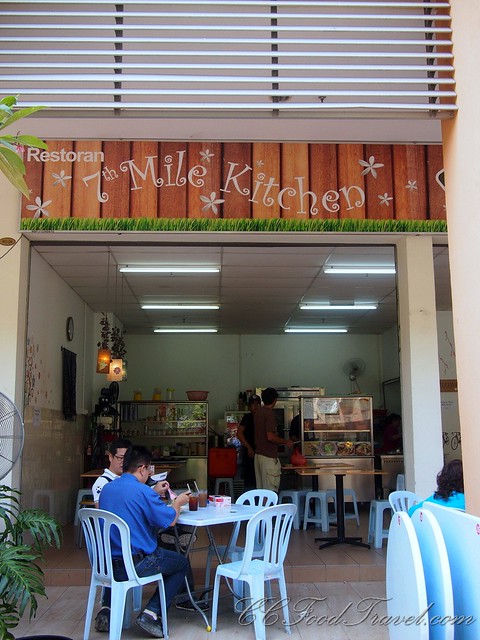 The 7th Mile Kitchen might seem like a new kid on the block having opened several weeks when we visited, but they are in fact, that same popular stall found in Taman Megah. The one famous for the Tomato Noodles – some people like it , some don’t but yeah, they were pretty popular, in their own right. 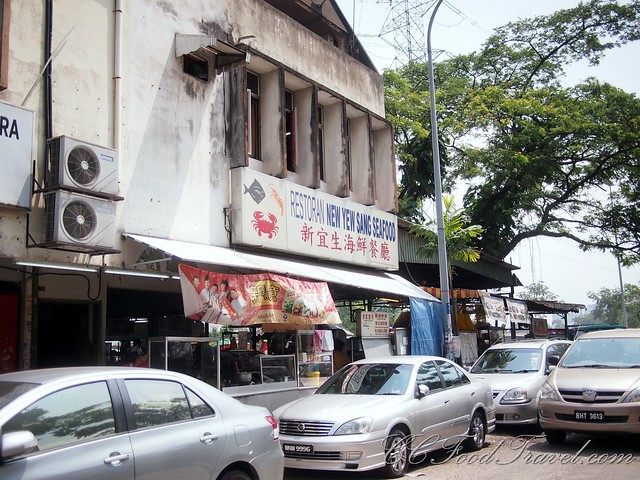 Our 4th Favourite Sarawak Noodles Stall is no longer in operation, unfortunately. There was once a Kolo Mee Stall located at the front of this New Yew Sang coffeeshop, that had the best tasting Kolo Mee. It was a little wetter than the usual but the flavors were really rather porky and rich. Unfortunately, now a new stall recently sprouted up with just average offerings. Why do all the good stalls have to go? And more importantly, where do they go? 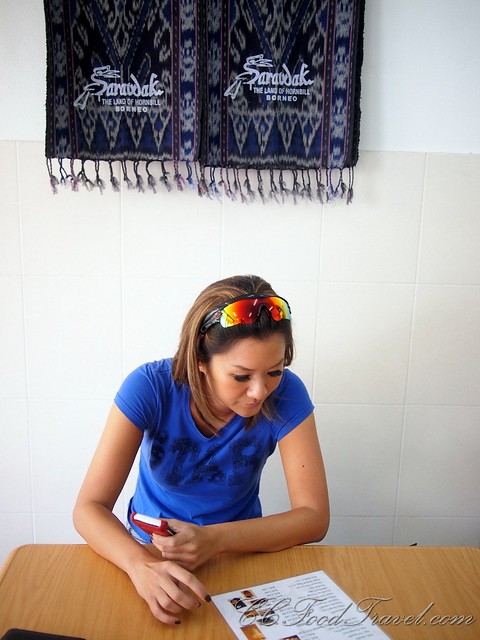 Ciki check out the menu.. some strange drinks on it.. 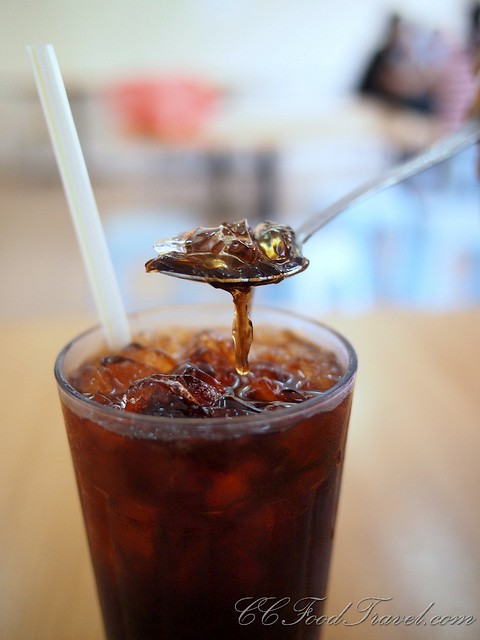 The combination of sarsparilla cordial and herbal jelly is uncommon for West Malaysians but apparently common in Sarawak. 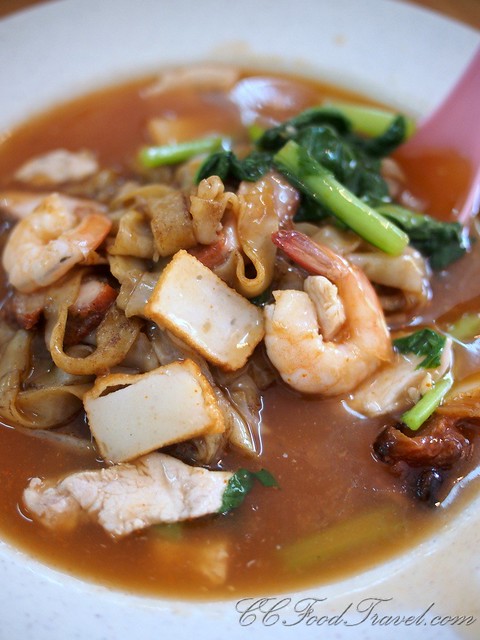 Still a favourite of ours although several of our readers have expressed disdain over this version. How can this be? The noodles have plenty of ‘wok hei’ and the tomato based meat broth is rich in flavor. Maybe it doesn’t taste like this in Sarawak.. but the Chef Alex is from Kuching. He should know right? 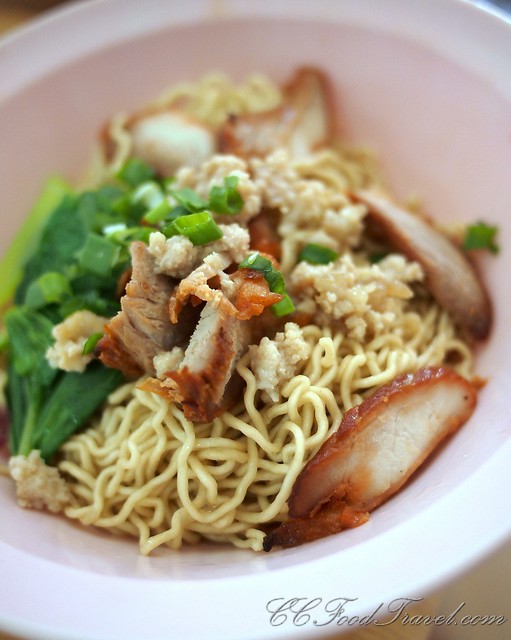 The Kolo Mee here is a little erratic. Often good but sometimes missing some flavor. Might need to add some BBQ Pork sauce. 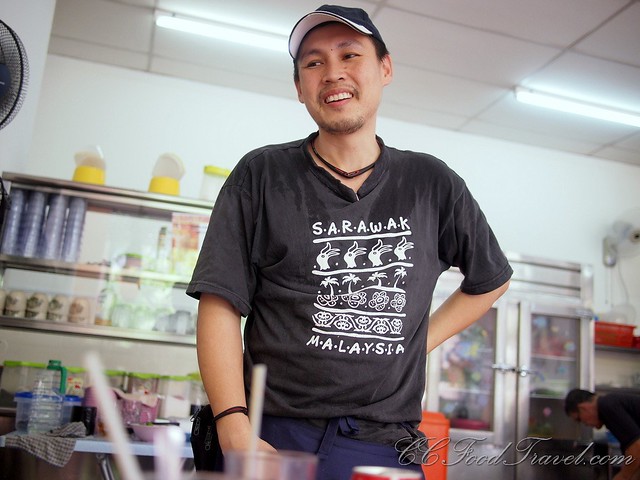 Alex the entrepreneur, formerly from Kuching, sharing some of his background with us. 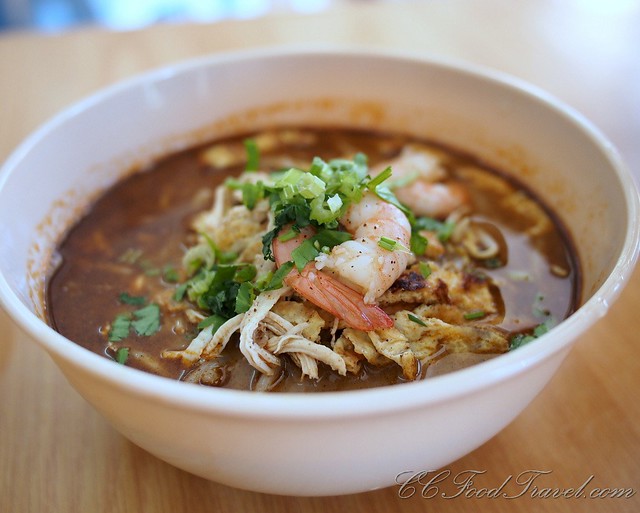 The prawns not quite the size of the Bangsar variety but the shredded chicken and omelette slices make up for it. The soup stock was not as robust as the one in Bangsar as well. 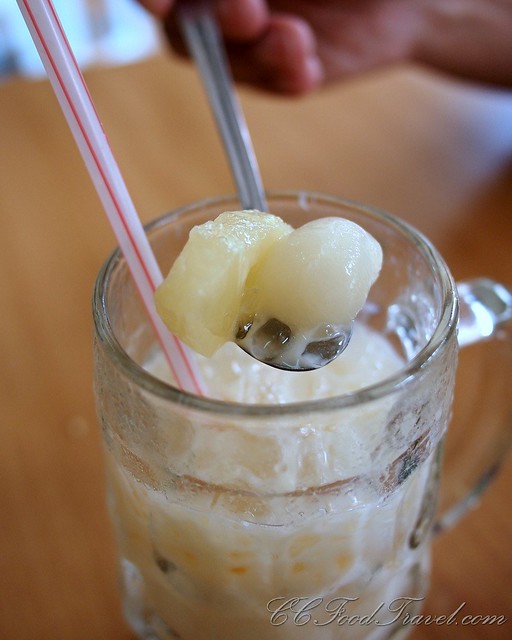 Evaporated milk with longan and sliced pineapples from the can. Ciki mentioned it tastes a little like the white vitagen!

Another one far off the radar location – extremely Cumi-esque to find this sort of off the beaten path stalls! This shop is manned by a senior from Kuching, located at the Bintang Coffeeshop opposite Giant Supermarket, and has to be one of the best Kolo Mee’s we have tasted. Some say the quality has dropped but every time we have visited it seems to be really rather good. 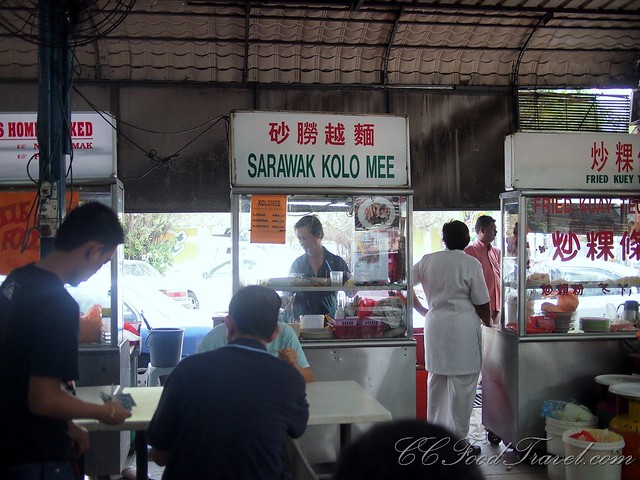 the camera shy uncle, hidden behind his stall 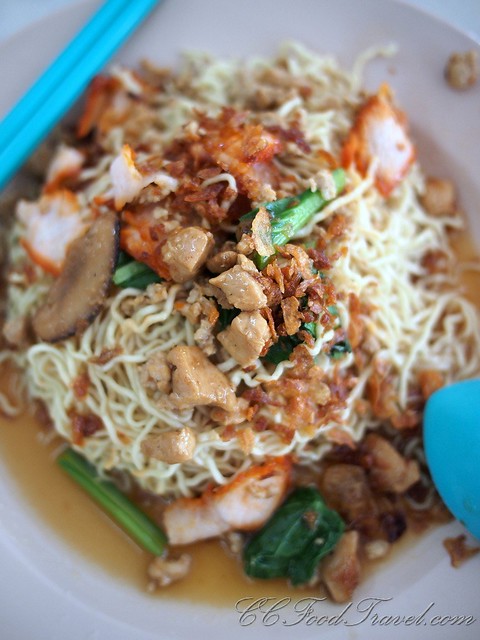 Immediately we could tell from the heady aroma, the flavour and the amount of ingredients that this would be our favourite kolo mee stall. So far it’s stil the best. 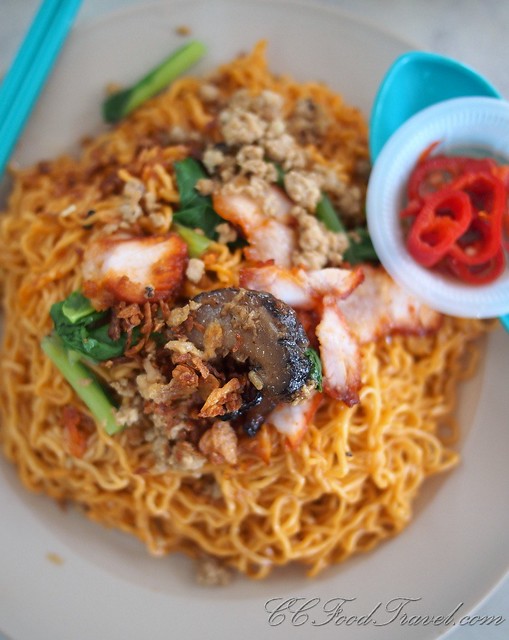 If you go for the one with BBQ sauce you will get this intense color to your noodles. The Kolo Mee here also has the additional mushroom slices, which is a real plus. Not to mention the fact that the noodles are almost always cooked al dente, garnished with insanely crispy shallots, loaded with super tasty minced pork, that all adds up to being tops on our list!

Add:
Bintang Food Court,
(opposite the Giant Hypermart)
GPS Coordinate: N03 03.751 E101 38.778
Bandar Kinrara,
47180 Puchong,
Selangor
So soon after writing this post, on 5 Sarawak Noodles Stalls in KL we cannot do without, a nice, kind reader left a comment on our blog asking.. What about Kampua Mee? So we went to look for this place.. Here is an add on bonus for those who love their Sarawak noodles.. enjoy! Kampua Mee @ Strawberry Cafe, Puchong
Follow me on Instagram : @agentcikay
Please show us some FB LOVE, thank you!

One day, as Ciki was reading stuff on the Internet, she found.. something that described herself and the company she kept, to a Tee….