The story continues from Day 6: Faces of Yogyakarta

After buying our train tickets for the  Argo Willis, which leaves at 1.30pm for Bandung, we found we had some time to kill, so we hopped on a ‘becak’ for a quick tour of yogya. 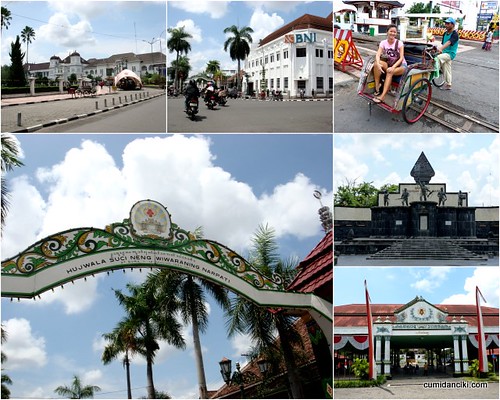 According to the popular travel guide book, it says there are 2 kratons in the city. One is a dud and not really worth your time, while the other is supposed to be rather grand. Too bad we didn’t have much time to venture in.

Kraton Yogyakarta consists of two separate entrances, the Main Court (Pagilaran & Siti Hinggil), and the Residence. The Main Court showcases the grandeur of Sultan’s monarchy, while the Residence is more homey, exhibiting the royal family’s luxurious lifestyle. This place is only open for the short time of between 8.30 AM to 1 PM daily and on Friday worse still – the attraction is closed at 11 AM!

While the guide is part of the entrance fee, they expect tips. Some guides might offer extended trips to the sultan’s servants batik workshop- this is a scam as they only bring you to a regular batik shop with super steep prices! It’s a good idea to refuse their offer politely. Rp 12500 (foreign tourist price) or Rp 5000 (Indonesian tourist price), Rp 1000 extra for a photo permit! 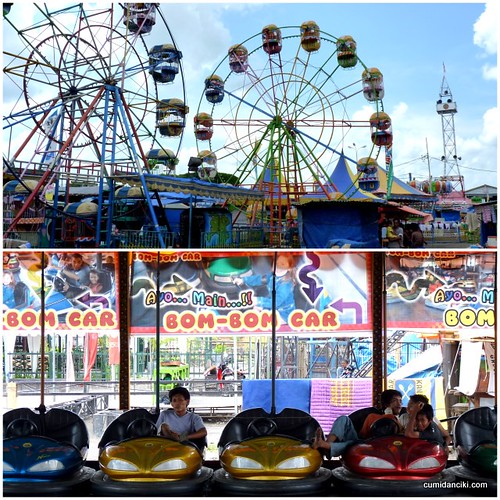 Since we didn’t have time to go into the palace, we decided to strolled into the fun fair. 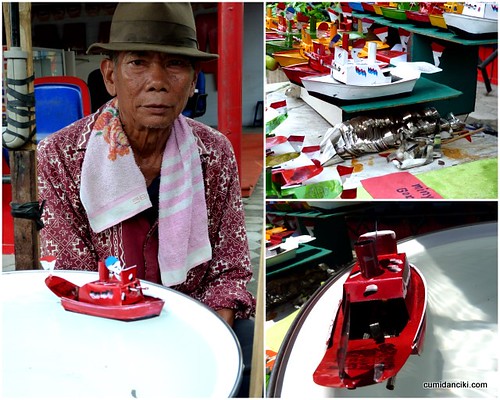 We saw this stall selling these amazing combustion powered boats, that even makes puttering motor sounds! Beautifully crafted from metal sheets and paint. We didn’t have enough time to figure how it worked but quick observation skills showed us that a burning cotton, doused with kerosene on a metal ‘furnace’, provided the combustion power. 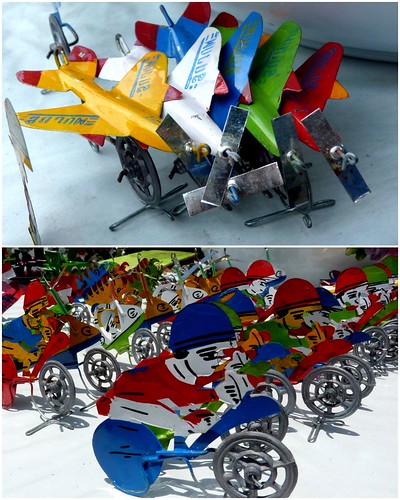 There were also cool planes and bicycle models. Looking at the pictures again, Cumi wished he bought a few! 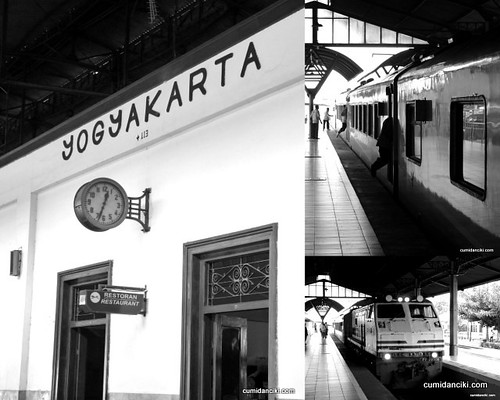 6 plus hours later, after watching a poor cinema copy of a  ‘B’ grade movie, with lousy sound, our nerves were getting frayed.  Not to mention the heavily repeated, jarring train promos on the 21inch cabin TV. Finally after staring at the green scenery outside the train and numerous walks up and down the aisles along all the carriages, we arrived at the Bandung Station, to what else but a wet and dreary Bandung! We felt like Noah on the Ark, where it rained for 40 days and 40 nights.

Within a 40 minute search, we managed to find a comfy hotel nearby which was cool enough for Ciki , called the Serena Hotel (Jalan Marjuk, No. 4-6 Bandung). As they were in the midst of finishing renovations (spanking new place), we found ourselves an a/c room with hot water and flat screen TV with satellite channels. Very nice indeed. Best thing of all, the next day, for breakfast, we had for the first time in ages,  something other than nasi goreng! Oh, life was starting to look rosy.

Anyway, later that evening after we had dumped our bags, we immediately went in search for decent grub. The hotel staff directed us to a street about a 1km away so we headed back out into the warzone of sandy potholed roads, puddles of water and relentless drizzle. I have to say, no matter how posh an area you are in (and I am referring even to the swankier parts of Jakarta city – we will arrive there later, don’t worry!) the pavements suck. Outside of the designer shopping malls, Potholes! Get out of a limo, potholes! Indonesia really has bad pavements and pedestrian walkways. Wait a minute.. what walkways? 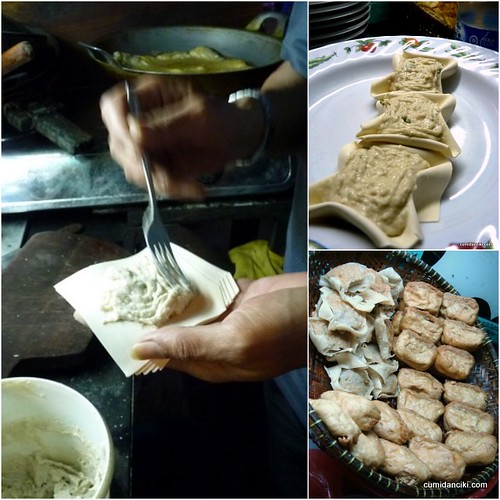 In Asia, freshly cooked food is always available around us at affordable prices. After a long day, some bickering, a long boring train ride and arriving in wet and cold weather, the sight and smell of freshly made hot cooked meal lifted our spirits! After walking along abandoned pale walled buildings, dimly lit streets for what seems like an eternity, we find the street section which the hotel staff talked about.  We found a few food stalls, brightly lit with fluorescent lights at the side of the road, while their patrons sit in the sheltered building corridor.

We ate freshly made batagor/siew mai, sweet potato balls (inside empty), tong yuen balls (rice flour) and some sort of noodle salad with tofu. Superb food I tell you. Simple yet delicious. The best kind. 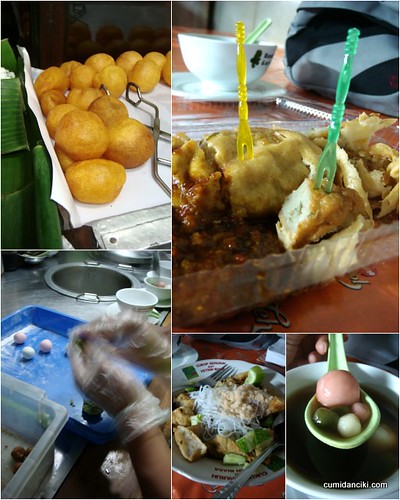 We chatted with the locals who opened up to us once they found out we could understand some Indonesian language. The lady from the stall then revealed to us that her daughter was currently studying in Sunway College, a private college located in within Kuala Lumpur vicinity. It seems even a street side stall owner has the capacity to send her children to a private college in a faraway land. We then headed back to early, to get a hot shower, watch some satellite TV and hit the sack.

tic-tac-toe.. a shopping we will go

tic-tac-toe.. durian ice-cream was our foe

The next morning, bright and early we were up. Having heard so much about Bandung’s legendary shopping, we were totally psyched! So we headed out to the major factory outlet area – Jalan Riau and Dago.. and shopped and shopped and shopped… BUT, unfortunately, we were disappointed. The selection of clothes was huge but somehow, the quality and the hip and happening fashion, missing. Give us Bangkok street fashion any-day over this I tell you. Sad to say, not impressed.

Anyway, the only memory we salvaged that day was the good, no great (!) satay we found at Maulana Yusuf, near Jalan Dago. Huge, chunky, meaty and with some super spicy tiny chillies and peanut sauce to boot. Awesome stuff! The sup tulang was excellent too, and the price was cheap.

So in conclusion, the only things we truly loved about Bandung, were still the durian ice-cream as well as this cool satay place. The rest was just mediocre. You will gather from this series (the Java series) that the smaller towns had a lot more appeal to us than the shopping cities. 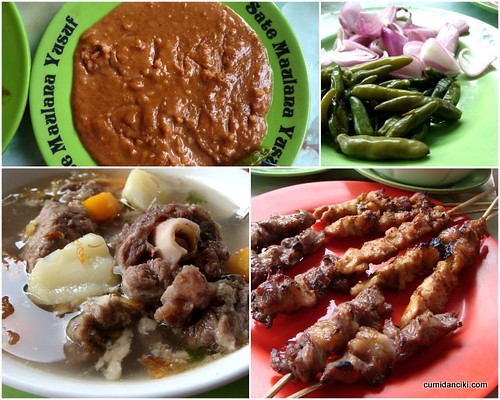 Anyway, not ready to be defeated by the factory outlets, we decided to persevere and keep shopping. We really shopped till the sun went down. Finally we return back to hotel exhausted. Well Ciki was anyway.. Cumi decided to go scavange for more food, as he does. 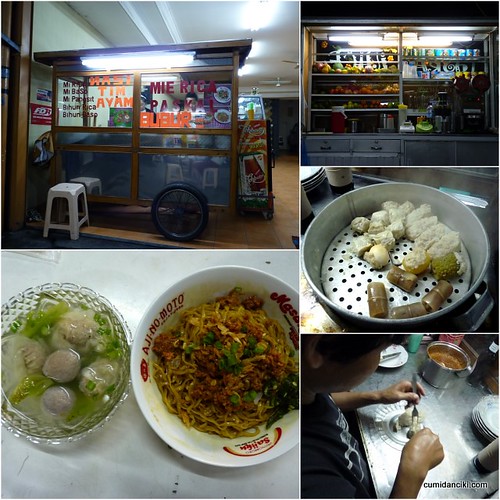 Cumi on the prowl, chances upon more street-food. He wasted no time in ordering everything he could get his hands on. The Mie Rica (noodle with mince pork meat) had an excellent texture and the taste was good. He figured that the ‘ajinomoto’ bowl had some instrumental part to play, in it being so tasty! Mie rica is actually similar to the Hakka Mee. A quick check on the web informs us of a famous mie rica on jalan kejaksaan along here (mental note to check it out next visit). The Yong Tau Foo here pales in comparison to the Malaysian version though. 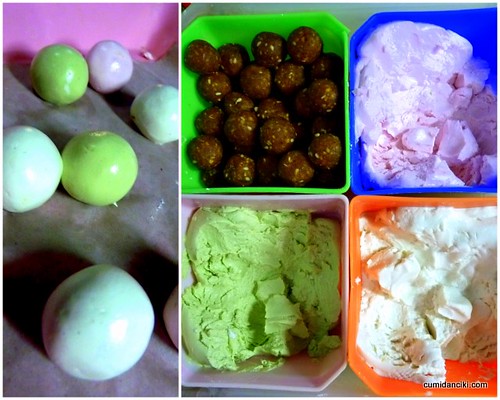 You hardly see tong yuen – glutinous rice balls with peanut paste or red bean, made to order these days. Home made ones generally will use natural food dyes; pumpkin for the orange color, beet for red, spinach for green, etc. I seriously doubt however, that the colored flour here employs natural food dyes. Ah.. colorful Bandung.. we shall miss u!

After this .. the amazing craters at Tangkuban Perahu!

Day 1: what you need to know to survive the manic roads system in Java!

Day 2: Magic Java come to take you away.. getting to know Bandung

Day 5: Borobudur & the 3 levels on Enlightenment ﻿

This man, is a bit of an Ipoh enigma. They say, that he was once such a rich and successful business man that he…