Touch down Jakarta Soekarno-Hatta International Airport, we caught the comfortable Cipaganti (airport shuttle) to Bandung at Rp75,000 per person.  It  is  a 2.5 hour journey to Bandung, but may extend over FOUR hours if the traffic is bad.  We came in Chinese New Year and during a very wet period hence we exceeded the four hour mark.  If this long journey from day to night didn’t  dampen our spirits, the tiny bus stop with a tiny shelter we were dropped off at together with the rain did.  Its odd that a large transport company doesn’t have a depot with a big shelter. We were fortunate to meet Elsa on the bus as she entertained our questions and gave us a great impression of adventure before us. Eventually we became accustomed to these epic traffic jams in and out of town and it became part and parcel of our travels. Everybody whether rich or poor is subject to the jam except that the rich can opt for the helicopter transfer! 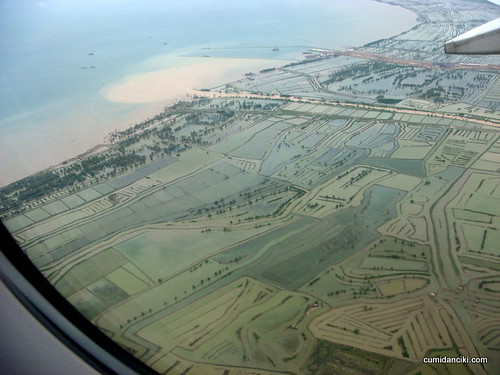 View of Jakarta from my window – looks like a child crayoned the lines! 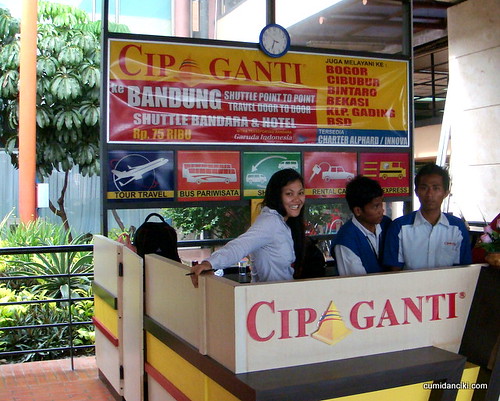 The Cipaganti – a popular Shuttle bus services between Jakarta and Bandung 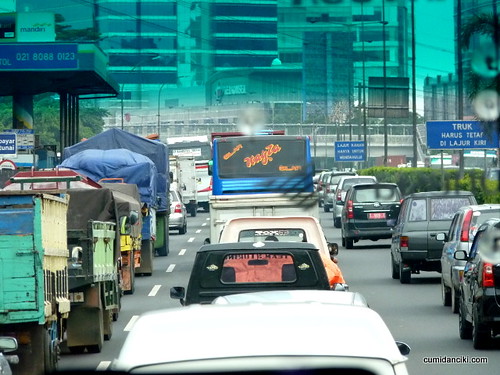 Oh get me out of this traffic jam ! – the journey out of Jakarta to Bandung is a slow one.. 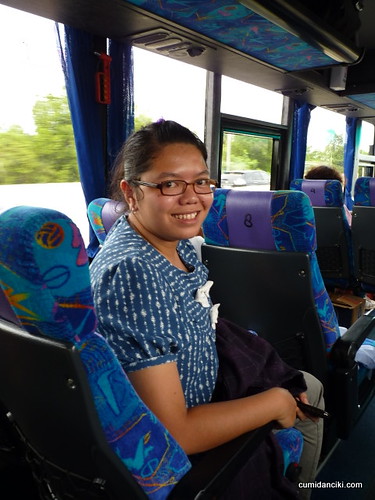 The lovely Elsa in the Cipaganti

Shuttle bus services between Jakarta and Bandung is fiercely competitive. Roughly speaking, services can be categorized as either door to door (chartered car or van that takes your group exactly where you want to go, for approx Rp400 – 500K) or point to point (from a terminal to another, for approx Rp70 – 80K). These include the 4848, Cipaganti, Primajasa, Silver Bird Van and X-trans. 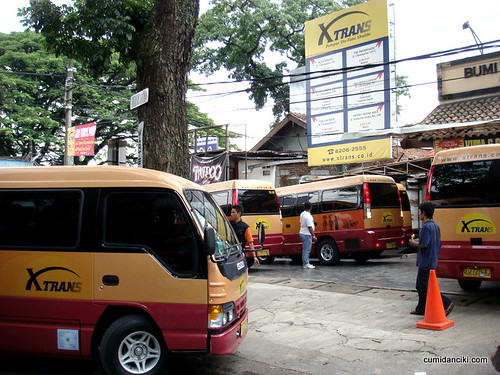 The X-trans ( for Cumi & Ciki, it ranks second to the Cipaganti – extremely comfortable) 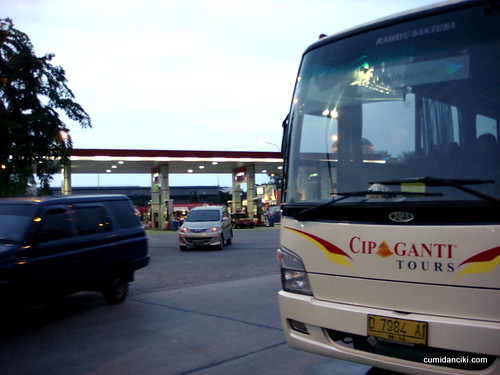 There are various options (all counters located outside the main arrival hall of the airport) but the ones that we recommend and had good experiences with (i.e. timely, clean and polite personal) are:

i) X-trans express – Rp 70 000 per person
– type : luxury mini van
– counter near kfc outside the airport
– driver- insane – drives like a fiend and because of the nature of the roads, ‘bumpy’ is not the word! check for sores on your butt!
– stop : stops at Cihampelas street, Bandung ( shopping area in Bandung for cheap local stuff and jeans)

– type: a slightly larger luxury minibus.
– counter is bright yellow and red (see photo) outside the airport
– driver : seemed to stick within the speed limit but that was because it was extremely jammed so no way of speeding.
– stop:  stops at Cihampelas street, Bandung.

– type: airport limo but is esentially a minibus

– counters found outside Terminals I, II and III

– drivers are safe and courtious.

– the vehicles are normally run-down and old and you are at the mercy of the drivers who chain-smoke, make many unauthorized stops to pick up people as well as double up as transport for dry packed food (rice etc.)

– slower than the previous mentioned options and you may just end up getting to your destination in double the amount of time (old vans with no power, plus too many stops). 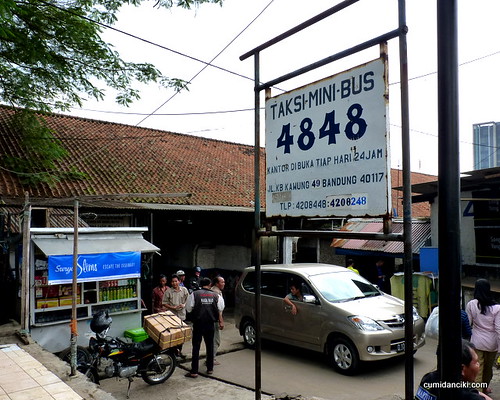 4848 – Bandung’s local shuttle service out and into Bandung. Not the most comfortable of rides as the vans are a bit run-down and plenty of stops during the journey. 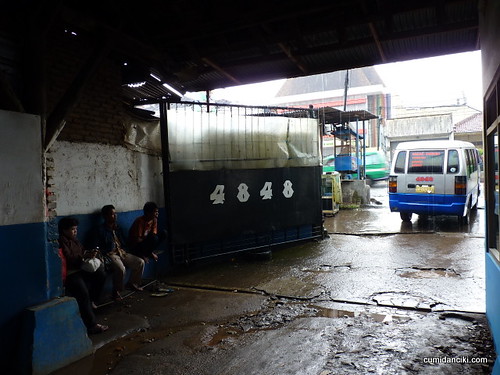 4848 terminal in Bandung – check out the road conditions!

Be careful of the pushy men who approach you and insist you get a car from them. These tend to pose as a hassle because you really need to know how to negotiate and already have a price in mind.  These men mainly offer private transport to Bandung, usually in the form of MPVs, toyota innovas or toyota unsers. Best to take the shuttle services such as X-trans or Cipaganti. There is an option to be dropped off at your hotel or intended destination with the door to door service. That popular travel book mentions that door to door service may not always be a good option since  your transport may be caught in heavy traffic on the smaller roads.

In the past, throughout our travels in South East Asia, we have been pretty comfortable with driving around in a rented car (Cumi learns road systems extremely fast) we found it near impossible to rent a car without a ‘Supir’ (driver) so we ended up taking local transport to get from A to B for the entire duration of our stay.

When taking taxis be cautious as well. Even the metered ones can cheat you if they think you are some unassuming foreigner. The reliable taxi to take is the Bluebird.

If you are heading into Jakarta, opt for taking the reliable bus shuttle service  (large city bus) called the DAMRI. Reliable, clean and safe.

Sometimes, when traveling from town to town, taking the train can actually bypass the road jams. However, we found out that taking the train from Bandung to Jakarta takes 3.5 hours,  but by road, it is 2.5 hours. When deciding on the train, be sure to take the executive Argo Wilis because that is the top end coach and very comfortable. By the way, Executive (air-cond carriage) is ranked higher than business class (no air-cond), unlike flying business class! From what we noticed, the difference between Argo Willis and Executive is that the former has train attendants bringing you food and souvenirs to sell, the toilets get cleaned regularly and there is television.

If you prefer the hardcore backpacker way, the hot sweaty economic coaches are available as well. Not quite the chicken coop ones like in India but still there are seasons for the crowds 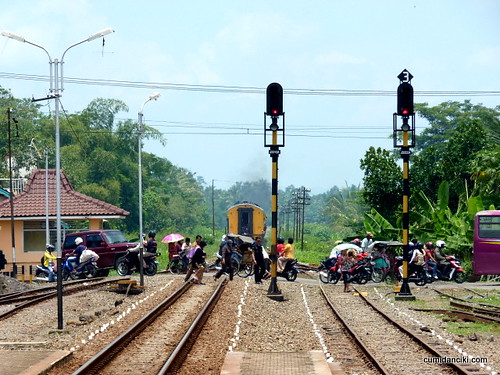 Hap-hazard crossing at the railway lines.. we soon got use to this! 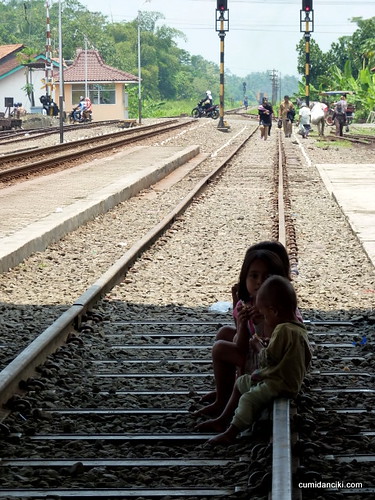 Passing time on the tracks 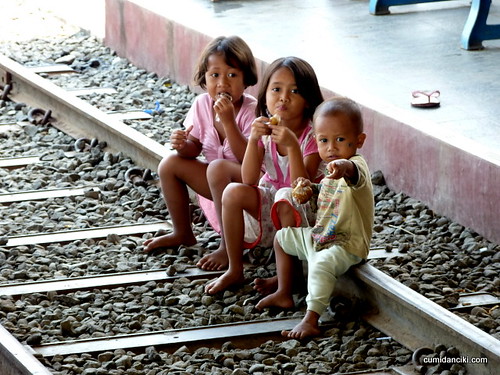 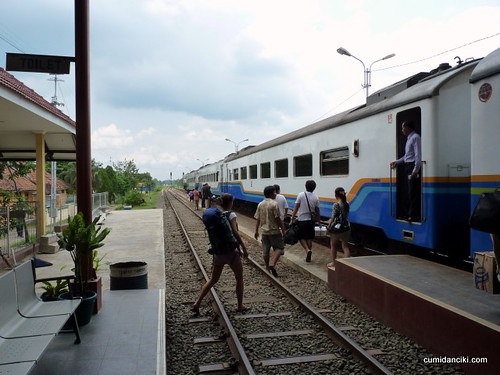 Me crossing the line (not literally) 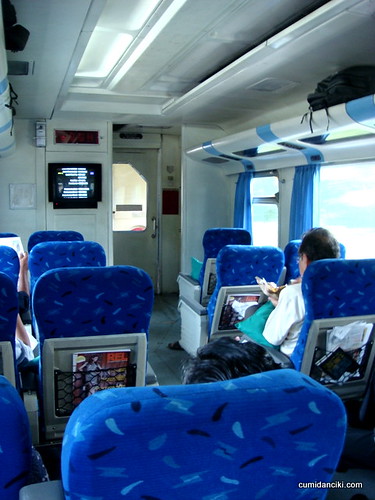 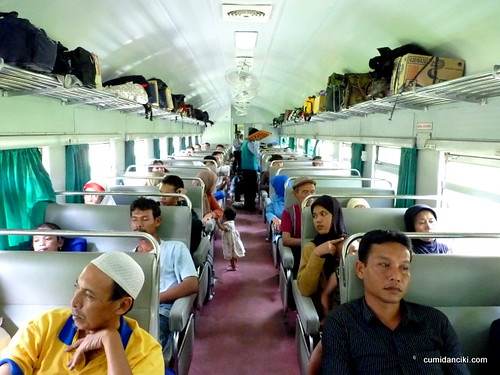 The more basic ‘business class’ that is non-air conditioned and the seats are less comfortable. 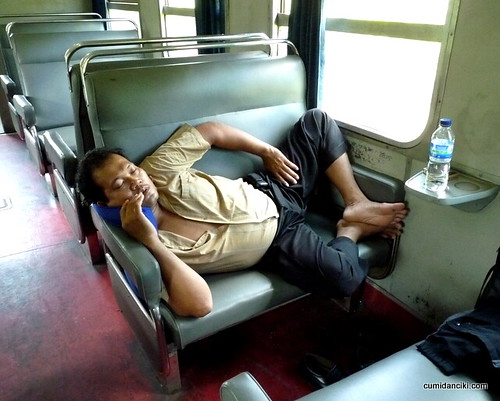 Still, some make the best of what they have 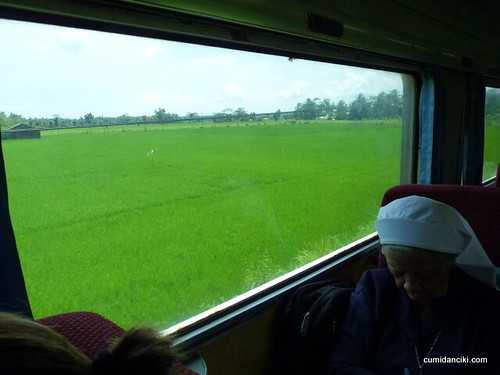 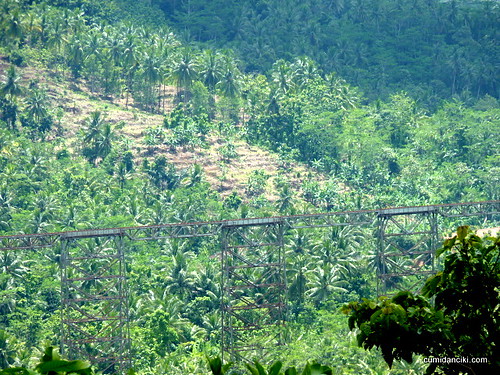 For getting around within a town, we hardly used taxi’s throughout our stay in Java, opting for the zippier local “minibus” called the ANGKOT (Short for Angkutan Kota – City Carriage). These tiny mean road machines are amazing on the roads.

The Angkot serves certain routes throughout the city and are operated privately. Being a foreigner, you will not know the routes until after several trips. Generally the local passerby’s and the angkot drivers are rather helpful so if you know your destination, just ask away. For us, it helps that we understand half of the Indonesian language and can manage a simple conversation.

The angkots also have origin and destination names on top on their windshield. So, you just need to ask if that angkot goes to your destination that’s all. Piece of Cake;)

Sometimes you need to change Angkots to get to a further destination. The other driver and passengers are helpful enough to assist you on where to stop and which connecting angkot to hop on to. The angkots can stop anywhere  along their route and sudden stops are common  and this to the dismay of vehicles behind.

Although there is an official price for angkot from organda (the local organization of these private city transport), sometimes price is based on local “gut feel”. Again the more unscrupulous ones will try to take a little bit more, but just remember that most angkot fares are ranging from Rp 3000 to Rp5000 within the town. It is good to prepare small change because you need to be fast getting in and out. Its made worse when there is rain or if you’re over six foot and/or if you are large bodied. 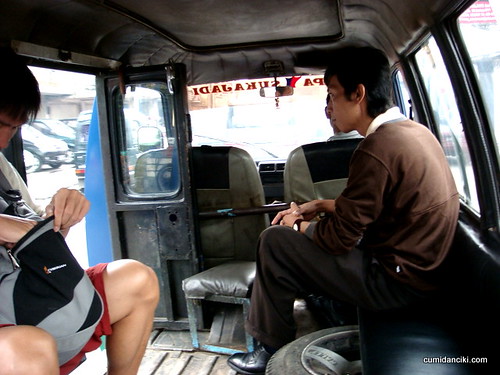 Angkot interior – We become Angkot Savvy by the second day in Java. 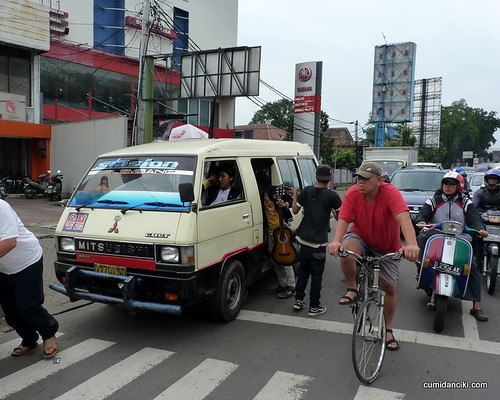 Angkot exterior- note the “Lembang” sign means that either the Angkot originated or will end at Lembang. You need to ask the driver about the “in-between” stops. Musicians make the most of traffic jams and sing at the Angkot door for some loose change. 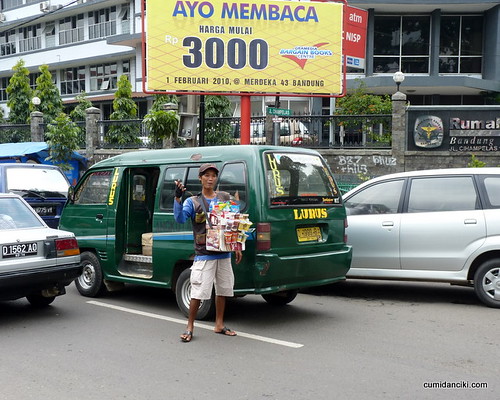 SHOULD YOU SELF DRIVE IN JAVA?

Driving in countries like Indonesia, India, Thailand, Myanmar, Vietnam, Philippines, Malaysia and Cambodia are only reserved for drivers who have excellent defensive driving skills. The ability to anticipate the other vehicles & pedestrians movement is essential in preventing accidents. We tip our hats to the Indonesian drivers as many have excellent defensive driving skills and the rather cool manner when dealing with a difficult situation (compared to Malaysia’s ill tempered drivers. Cumi is guilty as well!). Even with such haphazard driving conditions, we noticed many vehicles did not have dents or scratches.

Petrol prices are cheaper than Malaysia. The Indonesian government has greatly subsidized the cost to allow its large low income citizens to eke out their living. At time of print, it’s approximately Rp4500 per litre.

From our observations, the bumper to bumper jams are less irritating compared to the poor signages which will add frustration since you might end up in another traffic snarl. Driving in Jakarta is not worth it unless you are familiar with the roads and the requirements for passenger loads entering certain areas. If you don’t enjoy the idea of hassles in dealing with authorities or infuriated locals when an accident happens then best not to self drive.

If you are not a ultra budgeted backpacker and have limited time, hiring a vehicle with a driver in Java for a day or throughout your trip in many ways is worth it. As we calculated the cost of getting around in shuttles  for multiple locations, the waiting times/fixed schedules, traffic jams and the dreary weather, having a car and driver waiting for you is a better option. If you convert it to your local currency, hiring a chauffeured car is rather affordable.  If you plan to go with this for the entire length of your java trip then we suggest planning early and booking  cars ahead of your trip to take advantage of deals.

We did a combination of chauffeured cars and shuttles.

Up next.. Bandung’s famous Durian Ice-cream.. we don’t eat durian but read how we became BELIEVERS!

Since this has been a rather long weekend (for those working in Selangor), we’ve been catching up on movie watching. Another great movie that…