Today we leave for Yogyakarta, and hopefully in about a day, I will finally get to see the magnificent Borobudur. Yogyakarta is one of the foremost cultural centers of Java. This region is located at the foot of the active Merapi volcano, Yogyakarta was in the 16th and 17th centuries the seat of the mighty Javanese empire of Mataram from which present day Yogyakarta has inherited the best of its traditions. After having landed in Jakarta, and making our way through Bandung to Pangandaran, this was Day 4 and we were pretty psyched to get to a new destination.

Going by train to Yogyakarta meant that we could 1. stretch our legs whenever we wanted too and walk around, 2. we could appreciate the changing landscapes and scenery of Java from West to East of the Island and 3. we did not need to worry about the legendary traffic jams entering towns by road. Since we were coming from the Pangandaran direction, we would take the train from the Sidareja Station (south west of Java), known as the Lodaya. The fare was Rp 140 000/person and was rather luxurious with air-conditioning, ample leg room and reclining seats. 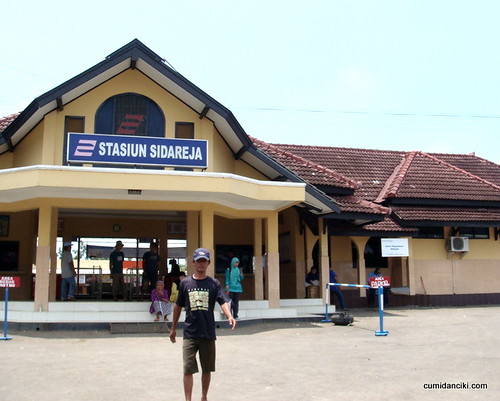 Stasiun Sidareja (SDR) is the main train terminal in  Cilacap, that links you to Yogyakarta in Central Java. It is one of the most southern located stations in Java Island. 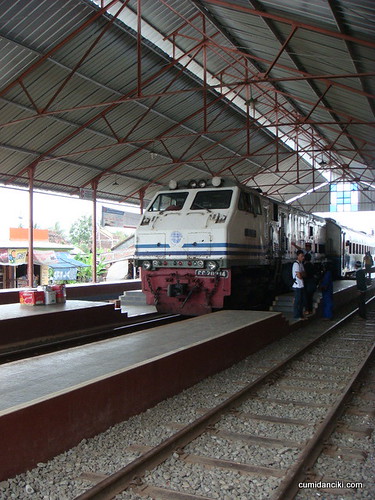 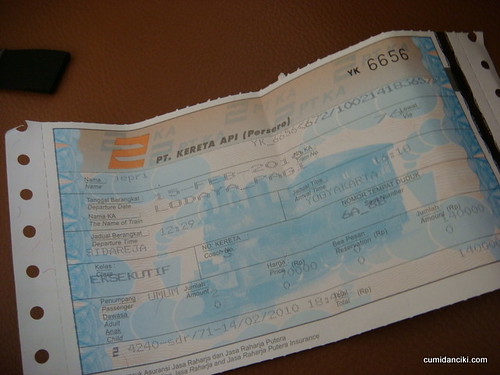 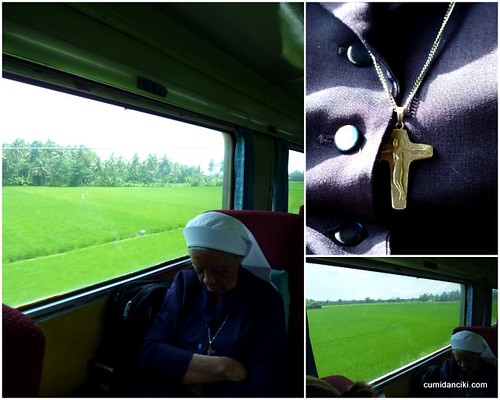 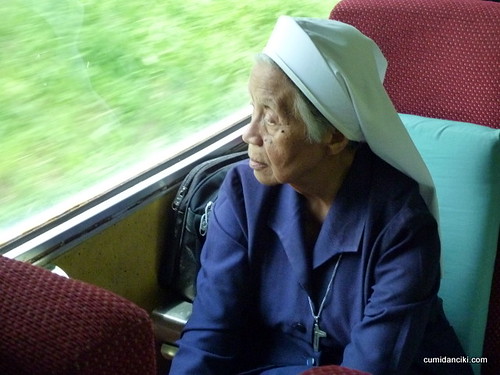 We met a nun on the train. She turned out to be a lovely lady and chatted with us about her only niece whom she was on the way to meet in Yogyakarta. 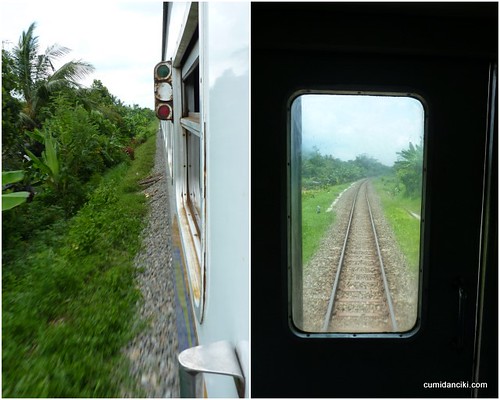 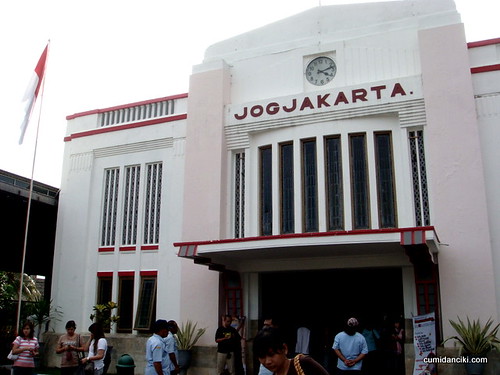 Yogyakarta! This province is one of the most densely populated areas of Indonesia. The city came into being in 1755, after the Mataram division into the Sultanates of Yogyakarta and Surakarta (Solo). This place is famous for their Gamelan, classical and contemporary Javanese dances, the wayang kulit (leather puppet) as well as traditional theater and other expressions of traditional art.  On almost every corner you will see craftsmen selling batiks, silver and leather works. Both traditional as well as contemporary art has flourished in Yogya’s culture oriented society, the most famous Indonesian impressionist being the late Affandi.

We arrived in Yogyakarta at 5 p.m. By the time we checked into our hotel, freshened up, and whipped out our Lonely planet to plan for our itinerary for the next day’s visit to  Borobudur, the sun had set and it was time to go out for dinner. 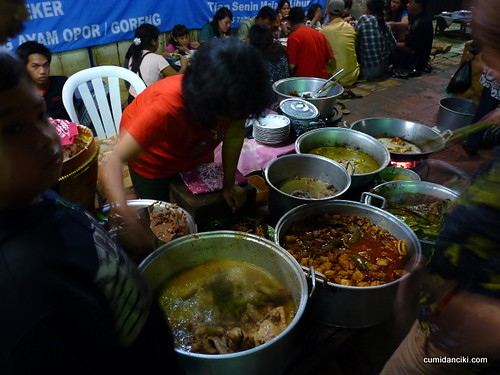 If you do not have a sweet tooth, like me, beware. Yogyakarta cuisine is known to be extremely sweet, as we found out first hand over the next two days. That night we went in search of some good street food to fill our stomachs. We found that not unlike Bandung, Yogyakarta was peppered with hundreds of stalls selling inexpensive food. They are located throughout the city, though the food stalls mostly set up after dark and only serve local snacks and food. Also, food stalls at major spots in the city stay open until the early morning. Some are more delicious than others and you really need to explore for yourselves. 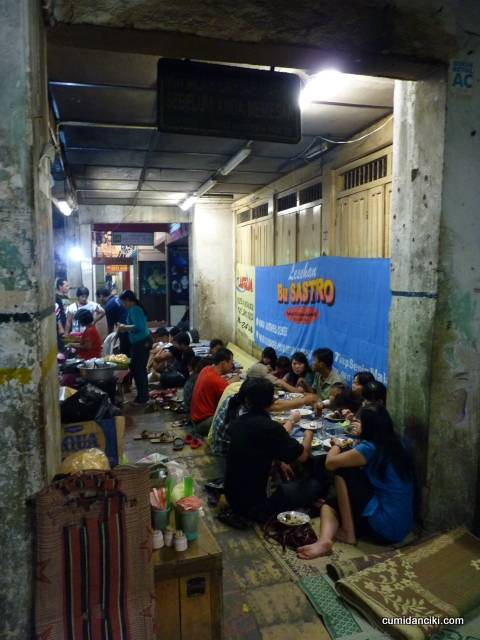 If you are in Yogya, the one thing you must try is the Gudeg (pronounced Goo-dirk). Gudeg is a concoction of young jack-fruit, coconut milk and other local condiments such as garlic and coriander. The color is reddish brown, as the result of the jack-fruit, coconut water, and palm sugar, being boiled for several hours. Some people are said to add some young teak wood foliages into the jack-fruit pot in its early cooking stage, to attain that nice rich brown colour.

Maliboro Street is the most happening street in Yogyakarta in terms of shopping as  well as for food.  As you walk along this rather long, straight street, you will see many gudeg outlets  that have their diners sitting on the floor. This is called lesehan dining. The eateries are small, outdoor stalls, on the sidewalk. Vendors load their clay pots and jugs on a three-wheeled pedicab or horse chariots called andong and started to set up their place around 7 p. m. and this goes on till the wee hours of the morning. You’ve got to sit on a bamboo mat and have your meal in front of you on a short table. 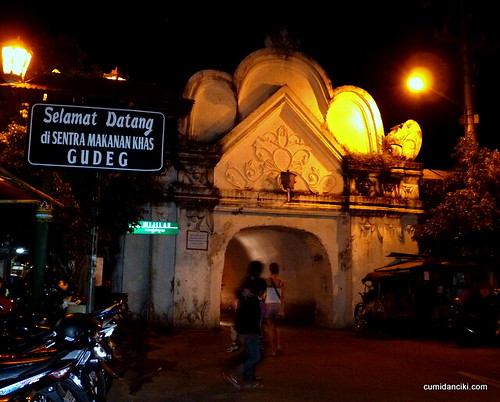 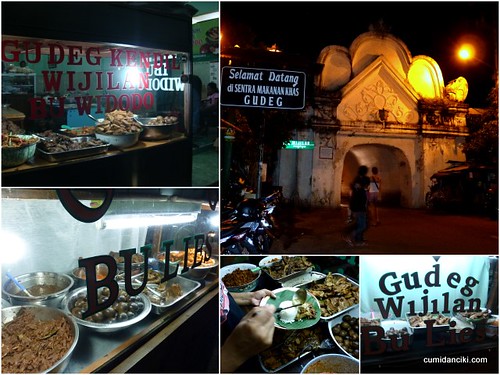 We were really lucky. Because of a wonderful tip from Ebee (of Friedchillies) we managed to find this other hidden area that specialized in the famed Gudeg. It was located just past a huge white gate/entrance and lo and behold! a hundred stalls to choose from, or so! 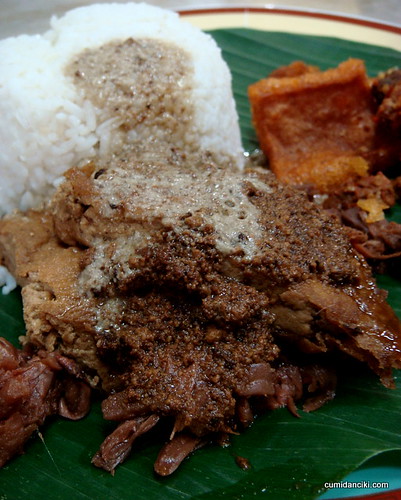 Gudeg is usually served on a clay plate, on top of a sheet of banana leaf. Sometimes the vendor just folds the banana leaf, and using a palm leaf rib, he forms a connical structure known as a ‘pincuk’. Many people prefer to eat their gudeg in a ‘pincuk’ because banana leaf produces an appetizing aroma when the hot temperature from the cooking reacts with it. The ‘pincuk’ is big enough to hold a portion of rice, gudeg and its tasty accessories. A number of options are prepared on the table, for instance, fried chicken, chicken curry with rich coconut milk sauce called ‘santan areh’, hot ‘krecek’ (beef skin) curry, tofu, tempe, and chili sauce. The gudeg itself is processed in a big clay pot. In the traditional method  of cooking, the gudeg is stirred with a wooden stick. Materials such as aluminum, should not be used as they might contaminate the flavour of the dish. 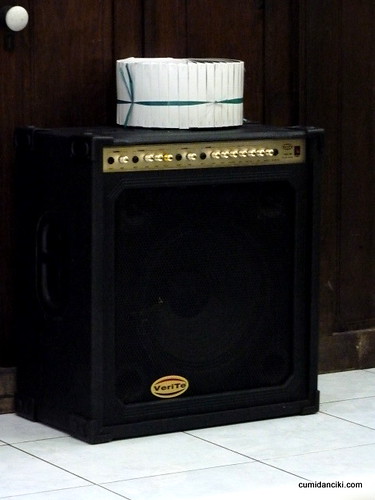 The restaurant we picked was really cool. Check out the Verite speakers the restaurant owned. Very cutting edge sound system ! 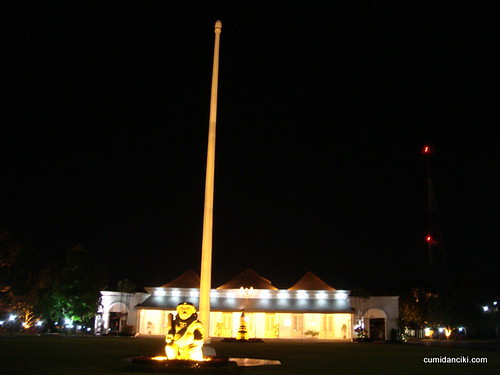 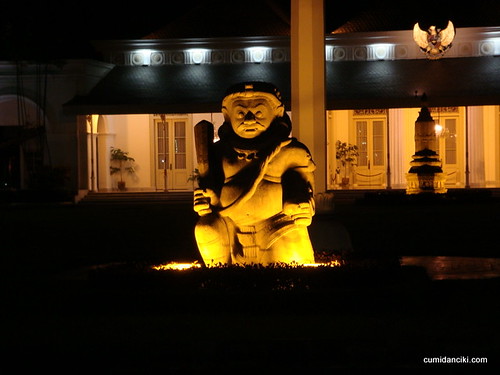 Walking around the Alun- Alun grounds.

After dinner, we continued walking until the Alun-Alun (town square). Yogya’s Alun-alun is divided into 2 parts the North and the South, the more popular one being the South. Basically it’s a huge open grassy area  with lots of street food vedors selling their ware, and a lot of youngsters just milling around and enjoying the food, each other’s company and the night breeze.

The North Alun-Alun (alun-alun utara) is actually the Sultan’s Grounds. It is the venue for the quarterly parade known as Garebeg. I was told by a local whom we met that in this parade, the Sultan’s servants offer up prayers and offerings during the Garebeg and after the parade, the people watching the parade scramble to get a scrap of this offering, as it is believed to bring good luck! 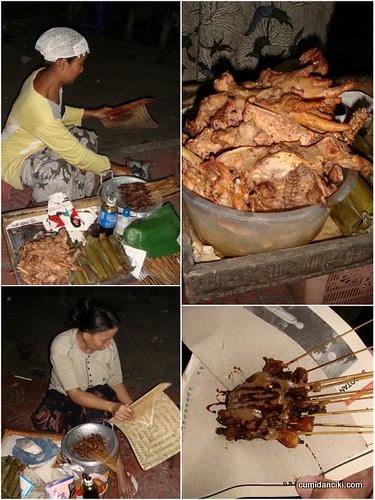 This was one funny encounter that Cumi had with the Satay (charcoal grilled skewered meats) in Yogya. When he asked the lady, what satay is was, she said “chicken”. He bought half a dozen and proceeded to eat them. Little did he realize (until it was too late) that it was Chicken skin and other internal unmentionables of the bird! Poor Cumi. That was the last time he ate Satay, that entire time in Yogya. However, we did find a great place for Satay on the way back, in Bandung – stay tuned! 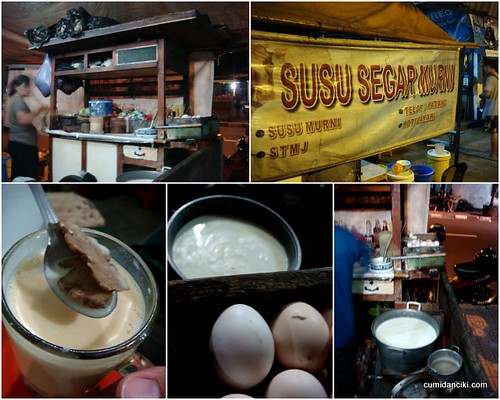 This was an exceptionally good experience we had with the “Fresh Milk” Stalls. These concoctions are incredible. The fresh, warm cow’s milk can be served with ginger, or a raw egg, or honey (called STMJ – susu, telur, madu, jahe) or even Tongkat Ali . And for an extra strong brew, All of the Above! I do not like milk but Cumi had this almost every other night we were in Java. He said it was fantastic. 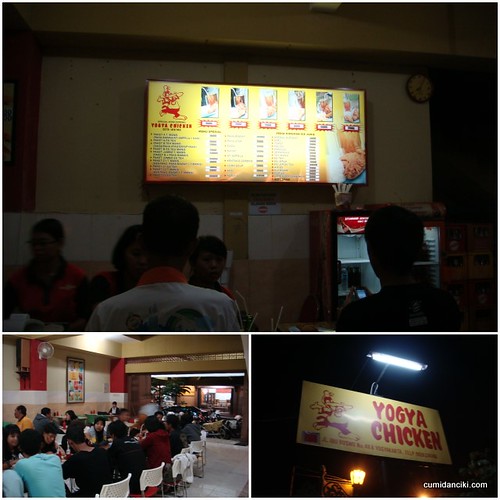 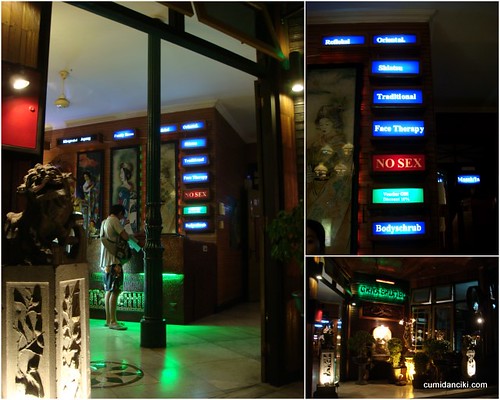 Another gem we found near the Alun-Alun, but hidden from the eye, as you need to walk down a narrow lane, was this Shiatsu Massage place. Totally professional and clean, they did an amazing shiatsu massage. The petite masseuses kneaded our tired muscles with strong hands and even ‘stepped all over us’ hitting many of the right pressure points.  It only cost us something like RM30 for 1 hour (Less than USD 10). Amazingly relaxing. Notice the sign that says ‘No Sex’. If you are worried about the place being sleazy, that sign is suppose to tell you otherwise!

Everytime I get a dinner invitation to Chef Choi’s my palms get sweaty. It’s almost like the anticipation of spring, a first kiss, a…