Stroll along Bourbon Street, Frenchman and Fulton,where jazz pours out onto the streets.. it never ends – right up into the wee hours of the morning!

3. Look at the Longest Bridge in not just New Orleans, but the USA.

Keith of Velvetescape, put me in touch with his awesome friend Pauline. She brought me to see the longest bridge in New Orleans as well as the USA. It can be viewed from many points around the city. A magnificent bridge that actually escaped unscathed by the recent hurricane.  That’s her voice you hear in the background giving me the tutorial on “the bridge”;) Thank’s Pauline! The Lake Pontchartrain Causeway consists of two parallel bridges crossing Lake Pontchartrain in southern Louisiana. The longer of the two bridges is either the longest or third-longest in the world depending on definitions, measuring at 23.87 miles (38.42 km) long.

4. Immerse yourself in New Orleans History

Stop by The Historic New Orleans Collection at 533 Royal Street for a crash course on the city’s history, which spans 300 years. It’s free!

Walk or go for a jog among the centuries-old oaks of City Park, picnic in picturesque Audubon Park or enjoy views of the Mississippi River at Woldenberg Park. 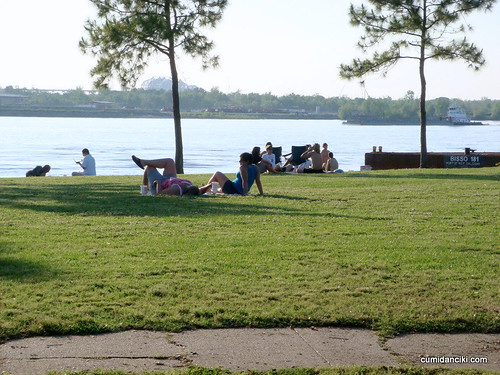 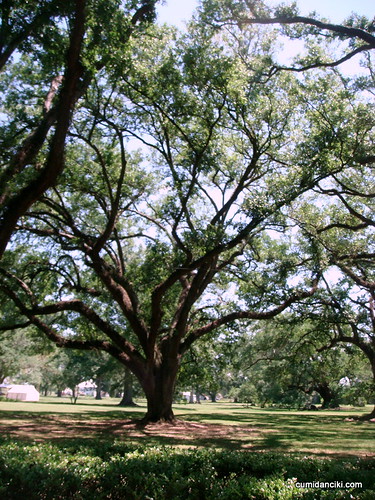 6. View the Architecture of the French Quarter

Fantastically intricate wrought-iron balconies, a cornstalk fence and many hidden courtyards. Simply lovely – a great place to fall in love all over again with a loved one;) A long stroll along the French Quarter in the waning light of evening, is my idea of a great time! 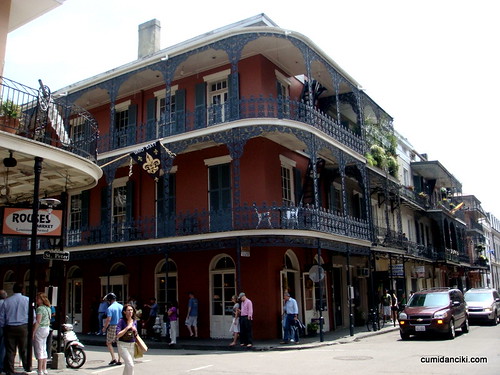 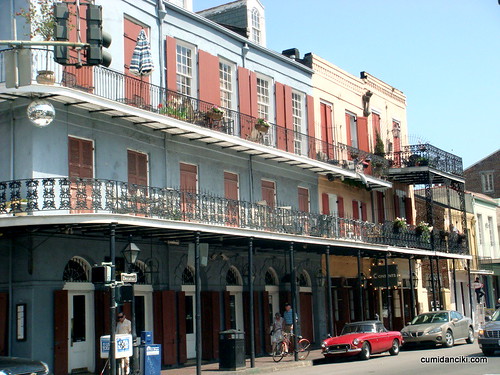 Well, window shopping is always free. If I owned one of these babies I would be happy person! 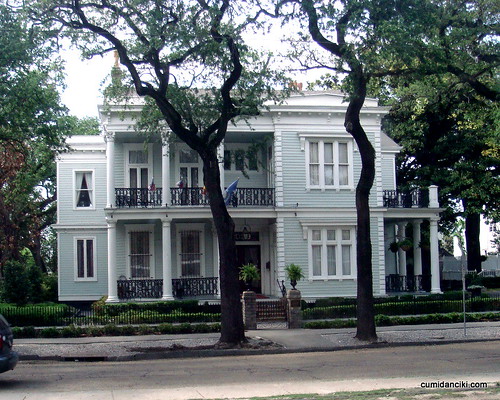 8. Browse Art throughout the City

It’s seems like you can find art in every corner of New Orleans – the galleries on Julia and Royal, the Mid-city and Baywater art markets, Jackson Square vendors etc, etc. Everything is color .. everything is art. 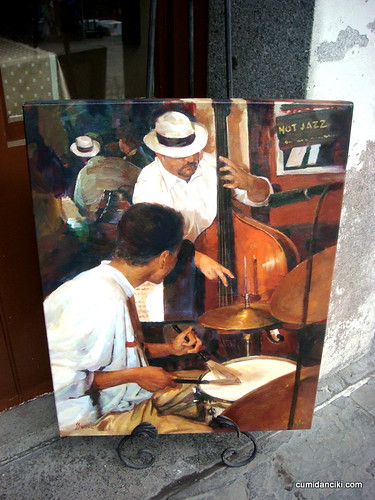 9. Spend a day at the Track

Did you know that you can participate for nothing, in the amazing thrill of  live thoroughbred racing at the New Orleans Fair Grounds. Feel so bourgeois walking the fairgrounds!

The free Canal street ferry will take you along the river so that you can view the most spectacular New Orleans skyline and then drops you off in historic Algiers. 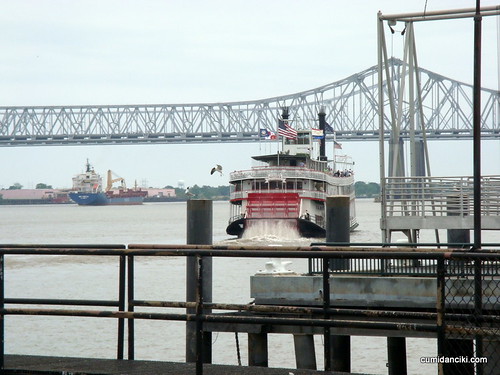 11. Be moved by breathtaking Churches.

The large Catholic population of New Orleans means many beautiful churches you can visit e.g. St Louis Cathedral, St. Augustine and Our Lady of Guadalupe. 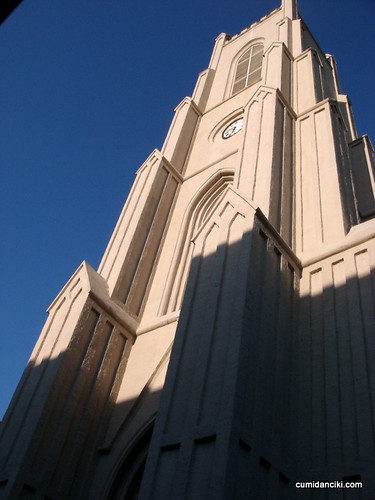 12. Be part of Free music Festivals

Every season is a festival season in Nawlins! I just got there in time for the end of the Jazz Festival! The other famous festivals included the French Quarter Fest, Stachmo SummerFest, Po-boy Preservation Festival and of course the infamous Mardi Gras. 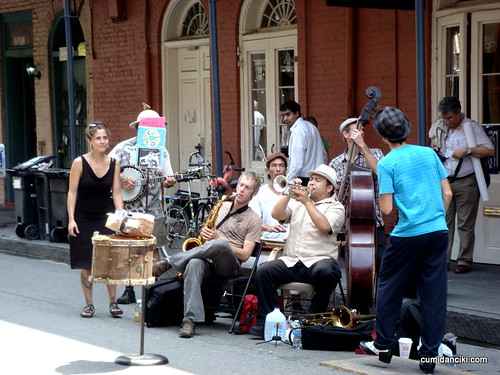 13. Bike along the Levee

Bring your bike , or hire one, and go for a ride along the levee while taking in the sights and sounds of the mighty Mississippi River. 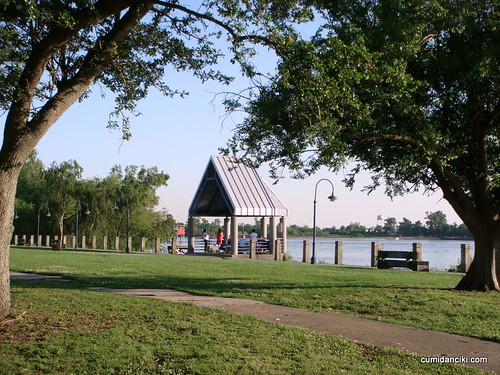 This place pays homage to the Jazz legend Professor Longhair with free shows on Fridays in summer!

Though New Orleans is thriving, there are parts of the city that could still use some help following Hurricane Katrina, Just a few hours of Volunteering can make a lasting impact on this place and also on YOU. (photo of a house that was never rebuilt , aftermath of the hurricane). 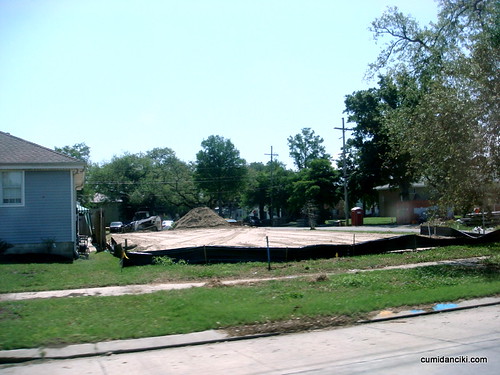 New Orleans, or in French , La Nouvelle-Orléans or in local slang, Nawlins,  is a major United States port and the largest city and metropolitan area in the state of Louisiana. The city is named after Philippe II, Duc d’Orléans, Regent of France, and is well known for its distinct French architecture, as well as its cross cultural and multilingual heritage. New Orleans is also famous for its cuisine, music, i.e.  the birthplace of jazz and its annual celebrations and festivals, like the Mardi Gras. On a less happy note, Nawlins is also famous for being situated on the hurricane and tornado belt.

When I arrived after a 30 hour flight from Malaysia, I did not know what to expect. Maybe I was expecting devastation in certain areas but I was really surprised that the place had rebuilt so quickly. Apparently, talking to the folks of Nawlins, they would not want to live anywhere else in the world or even the USA. Nawlins is home. Even if that means having houses wrecked etc, they take their chances. But when you see the beauty of the city, you understand why they don’t want to leave.

When the Hurricane Katrina hit in 2005, it caused more than 50 breaches in drainage canal levees and also in navigational canal levees and precipitated the worst engineering disaster in the history of the United States. 80% of New Orleans was flooded, with some parts under 15 feet of water.

Every year, during the hurricane and flood season (which incidentally is in a couple of month’s time) many families pack their things, pull down the shutters, board up the windows of their homes and head on out to Houston, Texas – the next city that is approximately 328 miles (528 km) away. A journey of only 5 hours can take up to 24 hours as traffic crawls out of New Orleans due to the incredible traffic jams, as seen during the last big evacuation. The last time this happened, my friend Pauline had two small boys with her and a dog. They had to keep a “potty” in the boot for emergencies. You can imagine just how harrowing the experience is. During this massive exodus the two-way highways are converted into a one-way road. There ain’t nothing going into New Orleans I tell you, just leaving. Leaving for the Hurricane Season.

“Colour Your Twelve Days of Christmas with Magic and Hope” at Grand Millennium Kuala Lumpur! One of the nicest things about Christmas, is the…