High Hills BBQ Restaurant. When A lil fat monkey told us that we were going there for lunch, I envisioned grassy plains, cool weather and a massive Australian BBQ pit. After all, the name “High Hills” sounded so Western plus the word BBQ is just down right Mat Salleh. Anyway, just some quick information on the place we were headed out to. Bukit Tinggi is a small town in the Bentong district of Pahang, Malaysia. This small town is located along Karak Expressway. Cumi and ciki actually love Bentong for it’s Chinese hawker food, especially the Hokkien Fried Noodles. Read about our past experiences here and here. 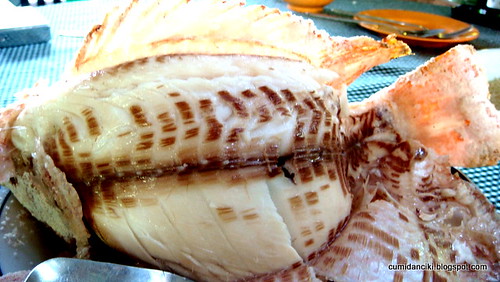 No, this place is 100% China-man style cooking. So, picture if you will, Chinese style BBQ. Strange no doubt but actually really rather tasty. For example, this fish is grilled (or BBQ-ed) Ala Chinese style, suspended over a Wok, the heat from which cooks the fish evenly throughout its salt crusted body. 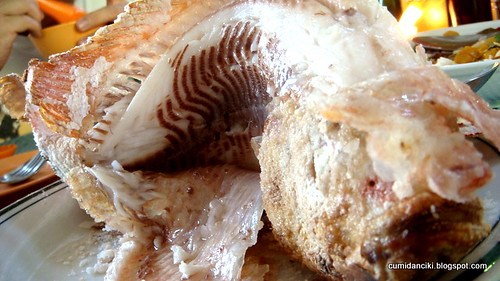 The salt is then peeled away, and what remains is a moist, BBQ-ed fish. The flaky, succulent white meat tells you that the fish has been perfectly cooked.  One special surprise in store of diners would be the stuffed garnishing in the belly of the fish. The man walked passed our table and said – Hey, don’t forget to eat the ‘good stuff’. Full marks for this dish. 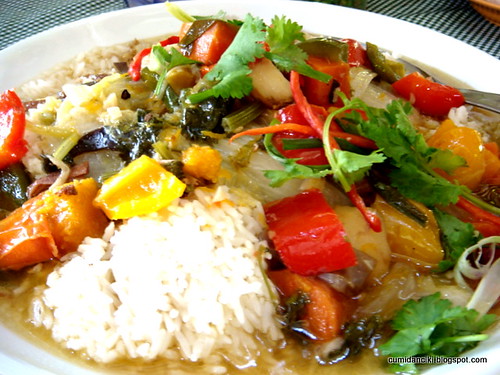 Rice with veges and drenched in sweet seafood/meat stock – RM12

Ask anybody who knows me, I am not a big fan of carbo because 1. it goes straight to my ass and 2. I don’t really see the point of wasting stomach space on something so tasteless and .. you catch my drift!(Noodles and bread I will eat anytime though.. so I guess it’s just that one form of carbohydrates that I don’t fancy). Anyway, with that in mind, and to cut a long story short,  I have to say that this rice dish completely took me by surprise. The flavour of juicy pumpkins, onions, carrots, peppers the lard of many fat animals and stock of many, many sea creatures, completely took over, this white rice dish and gave new meaning to the word – creative eating.  That day, I ate rice! 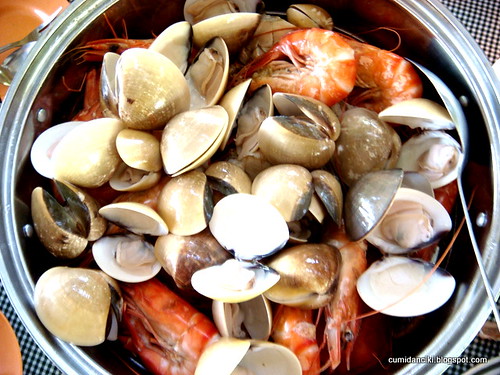 If you know what a towering double boiler looks like, then this top photo will come as no surprise. Calms, prawns, crab .. crustaceans in all forms and sizes, steamed in their own sweaty little juices over a period of time, to  yield perfectly cooked seafood as well as the sweetest of stocks that collects at the bottom of the tower.  This sauce will then be  used to cooked  fresh vegetables for your dining pleasure towards the end of the meal. 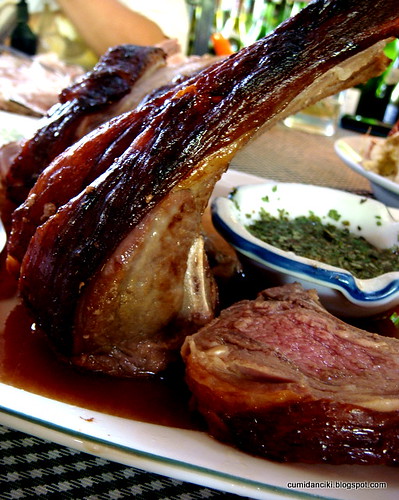 This lamb is the bomb. It beats many a fine dining restaurant flat for 1. taste, 2. taste and 3. taste. OK, and price too! The  meat is succulent and just with enough gaminess to make it memorable. The skin is grilled to a crisp with just a fine layer of white fat beneath it. The only sign that this was previously part of the rib of a Lamb, was the neat, sliver of bone at the base of that fat, juicy body of meat. Indescribable euphoria descended upon our table as we ate the lamb in silence. Awe struck, we ate up ever last piece with the homemade mint sauce. 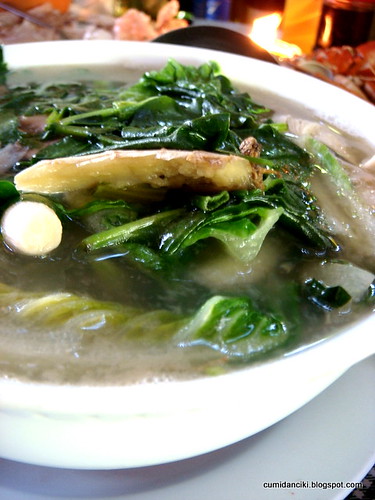 This is the vegetable in seafood stock that I was talking about. They served it up right at the end. A bit too salty for me, but I guess it would go well, with rice. 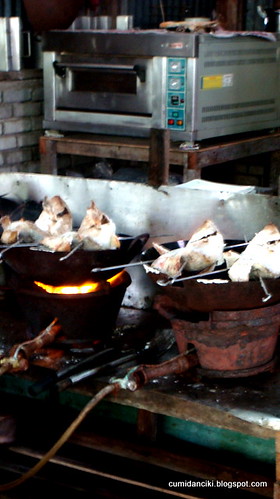 The secret cook’s handshake – flying fish and screaming monkey. (A lil fat monkey will probably kill me for posting this photo but.. come on.. it’s been done before .. have you not watched Iron Chef?!  😛 ) This is how they make the fish look like it was flying just a second ago. I love animation. 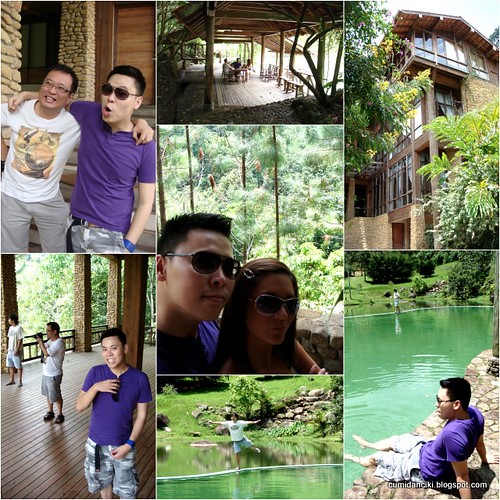 Off to our holiday home after lunch to work off all that consumed fat and cholesterol. Thanks FBB, for loaning us your holiday home on such sort notice. Much obliged! Next time we bring the relatives, the babies and the other monkeys! Thank you.. thank you:P

Also see this restaurant’s write up here and here.

The one… the ONLY ..Wine Fiesta 2018 by Straits Wine Co. Malaysia. This just happens to be, one of the most talked about events…