Penang has always been a hit or miss dining and entertainment scene for us. It’s always a miss when we’re out there alone. But, if it’s with a local or someone who’s lived there for more than 6 months showing us around, it’s always a hit. 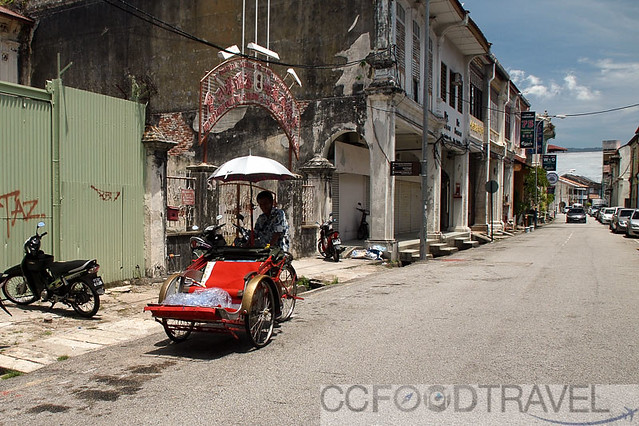 On a recent trip up north to the Pearl of the Orient, we went to check out 2 new venues, Plate and INCH, which we heard, was all set to rock the dining and entertainment scene. It was touted to be a place for the local hipsters to chill, and we couldn’t wait to check it out. Located on Muntri Street (a stranger on the same flight quipped that this was the ‘happening place’ in Penang) in the heart of Georgetown, it wasn’t too difficult to find. 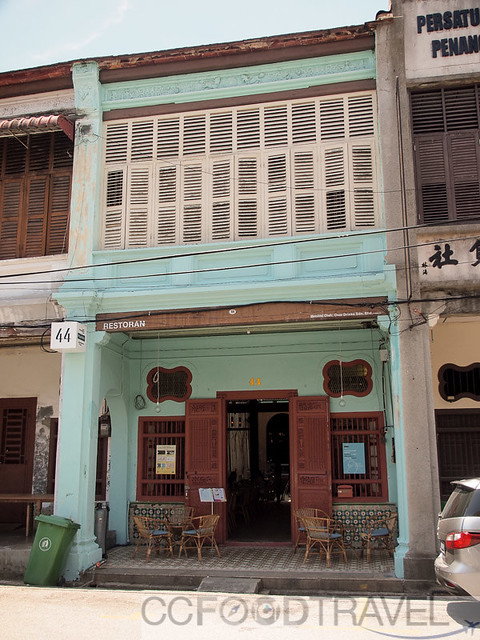 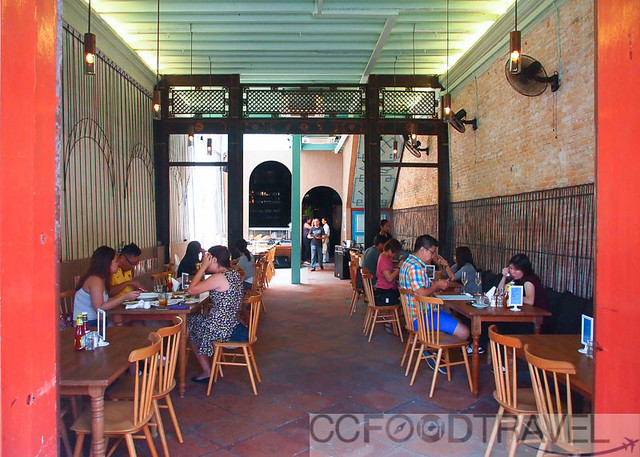 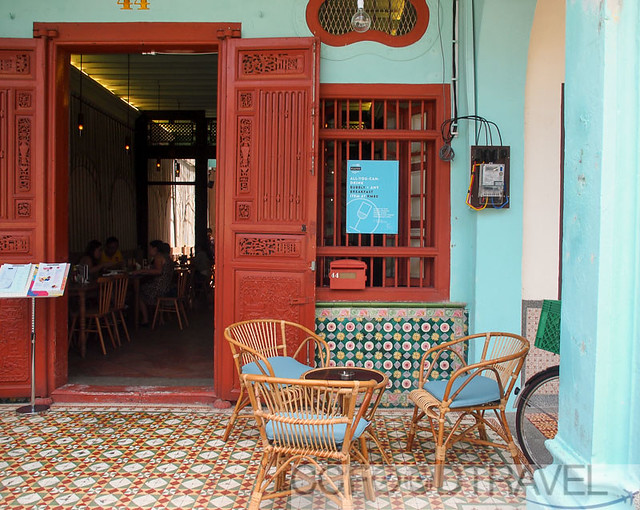 Plate and INCH we soon discovered, were both located within the same colonial shop-house. Plate was the day time modern contemporary dining at the shop front while INCH, at the rear, comes alive as dusk approaches, with a dining section offering spicier flavors and a mezzanine stage planned for future entertainment. INCH as it turned out was an abbreviation for IndoChina. 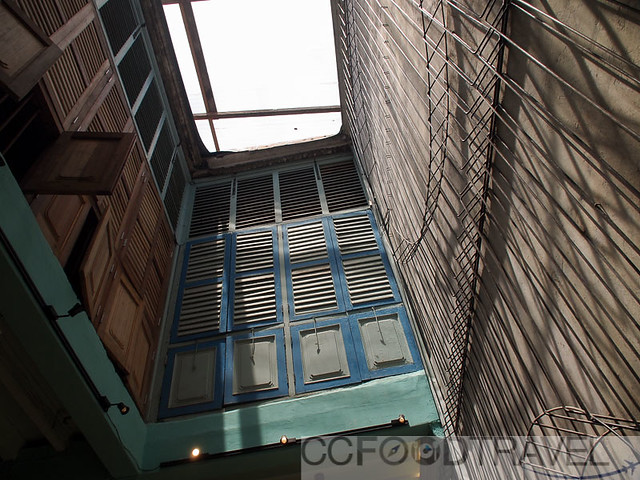 The design for both the outlets were comfortable, with lively colors and a modern Asian chic that showed off bits of the colonial period. 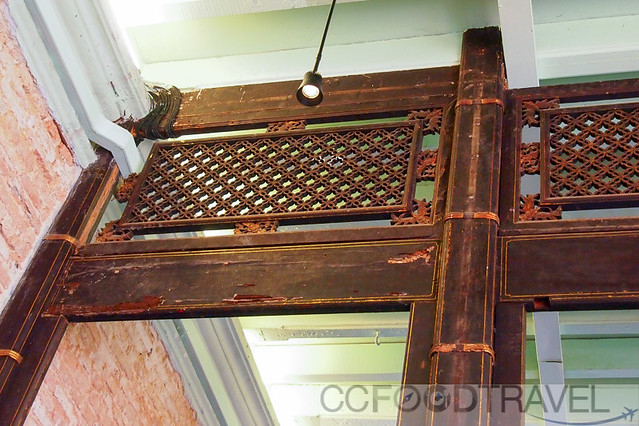 An antique partition door frame left to complement the interior 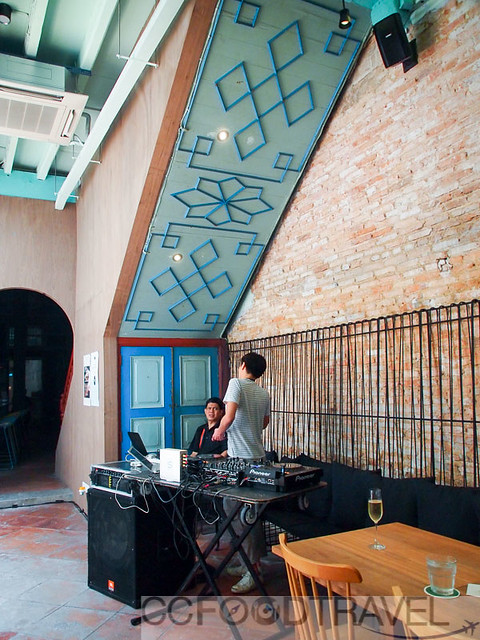 Downtempo tunes being selected under the beautiful stairwell

We had arrived about mid-day on a weekend. Just in time for their all-you-can-drink bubbly with mains, for just RM80. It was a great deal, we thought, even if it was only for Saturday and Sunday, between 10am to 3pm. Penangites are always looking for a great promotion so this would probably be a big attraction. 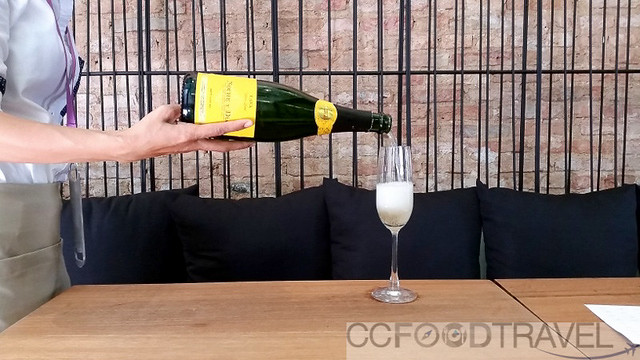 The weather was pretty hot outside, we weren’t in the mood for a heavy lunch but the free flow of cava was rather enticing. Our waitress recommended the Tuna Kataifi Salad, and Prawn Pasta from the menu. 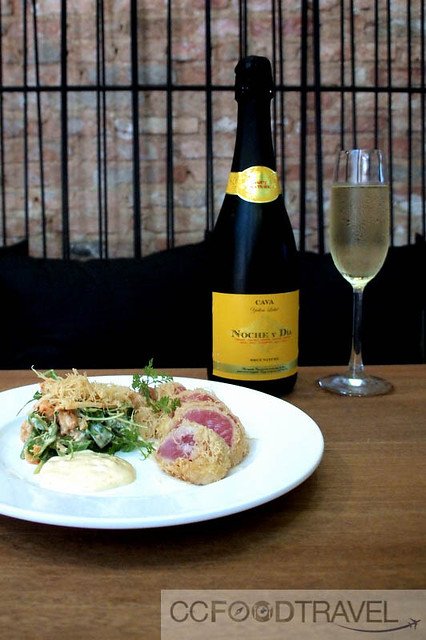 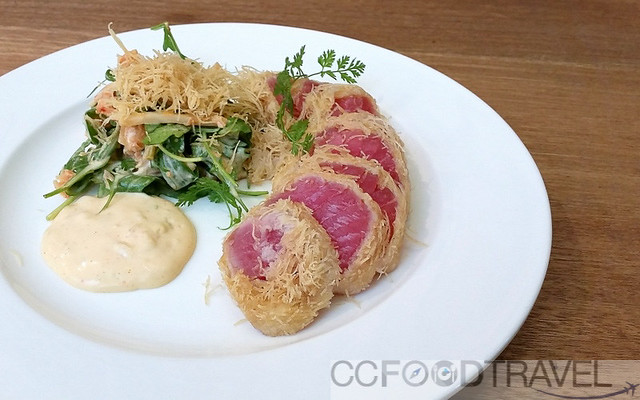 Kataifi is a popular Greek dessert where honey or sugar-coated chopped nuts are rolled in strands of wheat pastry. Here at Plate, instead of a sweet centre, a thick cut of tuna was served wrapped in crispy strands of pastry. The rocket leaves tossed with kimchi was an interesting mix and it worked for us. The leaves had its usually bitter finish and the chopped kimchi bits added a savory and spicy vinaigrette kick. The dish was light on the tongue and the tummy too. We really liked it. Plus it got on famously with the bubbly. No complaints here. 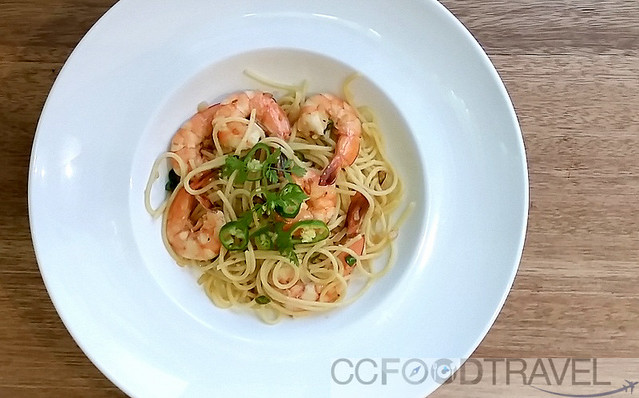 Straight up spaghetti and seafood dish. Nothing pretentious about it. No need for special sauces or garnishing. The fresh tasting prawns were big, plump, and juicy and exploded in the mouth with oceanic flavours. The pasta could have been cooked a few minutes less for a better bite but the crustaceans were cooked just right. How would it have fared against the famous Lorong Selamat Char Koay Teow? Check both out and let us know.

Here are a few other choices available from the lunch menu. Will probably try the duck salad next time. 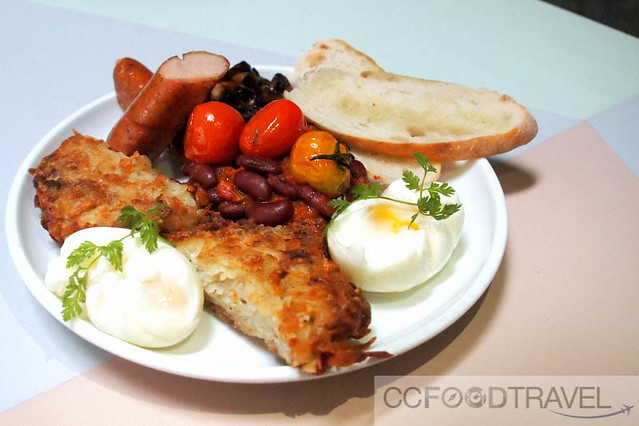 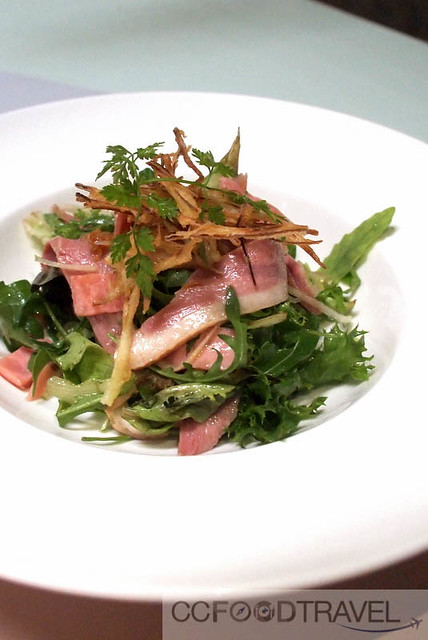 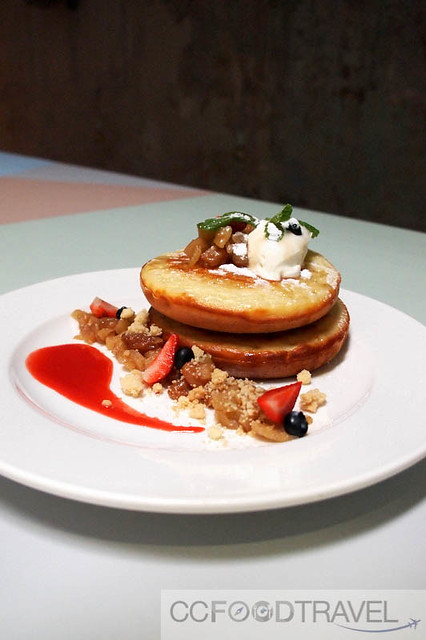 Pancakes (that’s what it’s called in the menu!) RM16 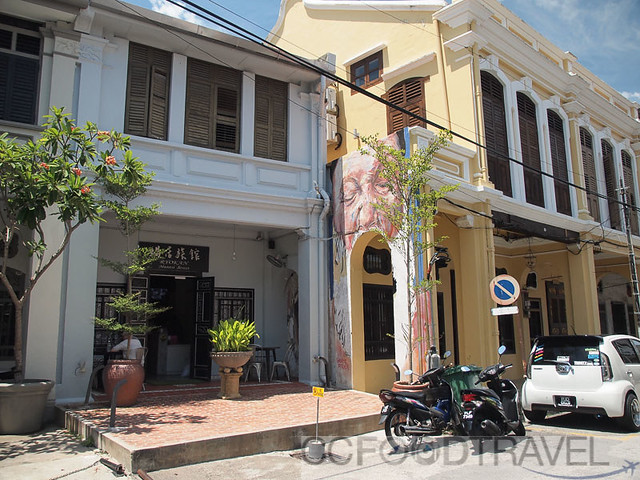 We stayed a few shoplots away at the Ryokan Hostel which has branded itself as a Japanese style boutique lodging. We didn’t find anything ‘nihon’ about it unless they meant the floor mattress in our room. Nevertheless, it had a modern minimalist interior, was strategically located, was clean, had a strong hot shower, good wifi, was secure, and had a friendly staff. In short, everything worked. 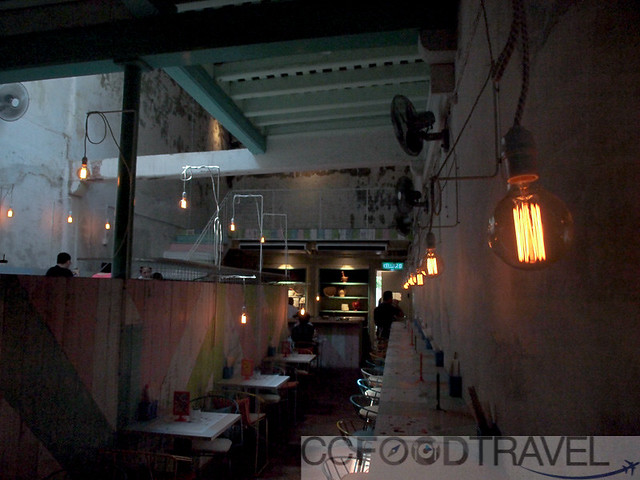 Later in the afternoon, we returned to INCH to check out a performance by Bihzhu, the red-haired Penang lass who sings original pop compositions with some jazz influences.  We hadn’t heard her live before and had only checked out her YouTube videos recently. If a band has a sound engineer traveling with them on gigs, they must be doing well. 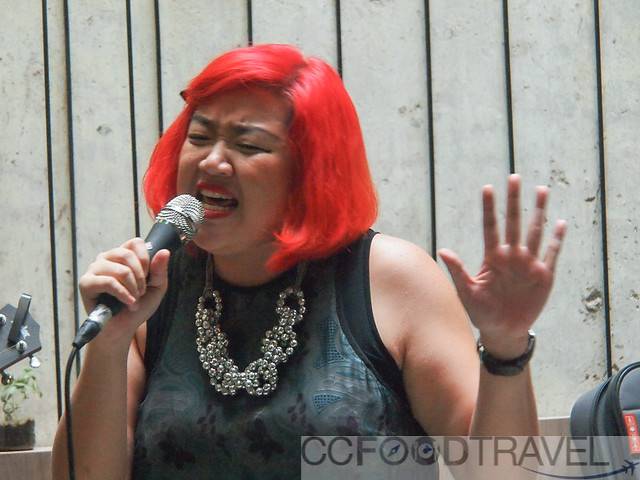 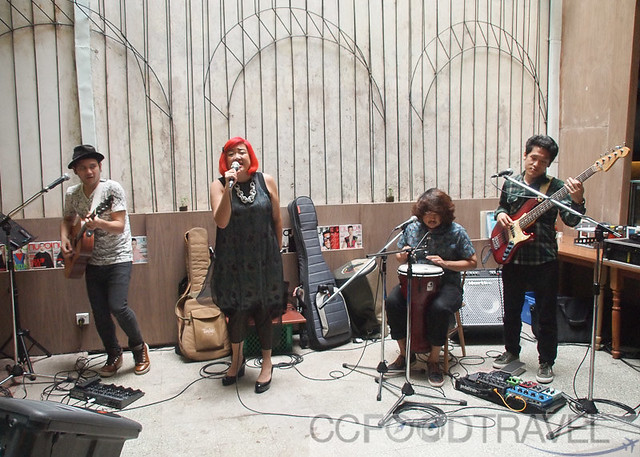 The band’s performance was tight and definitely better than many of the local bands we’ve heard sing live. Bihzhu’s voice sounded better live than in her videos. 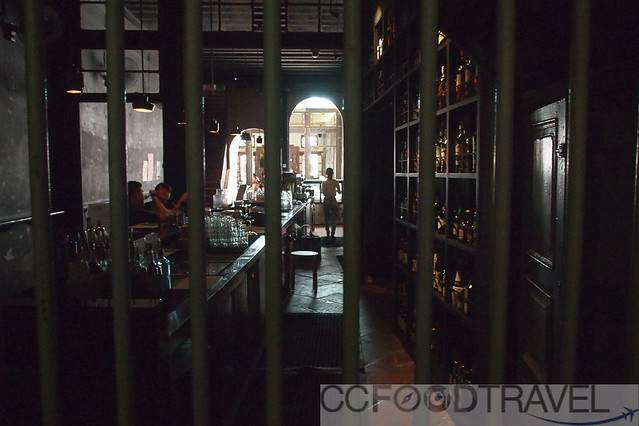 INCH has 6 signature cocktails that are twists on the trendy ones. We tried out 2 types and they were strong, and stiff drinks, while being balanced, in terms of flavour. Excellent concoctions for the island city and affordable compared to the ones from Kuala Lumpur and definitely Singapore or Hong Kong. The extensive bar also offered a wide range of wines, spirits, and soon, we were told, craft beers (from small batch artisan brewers) as well. 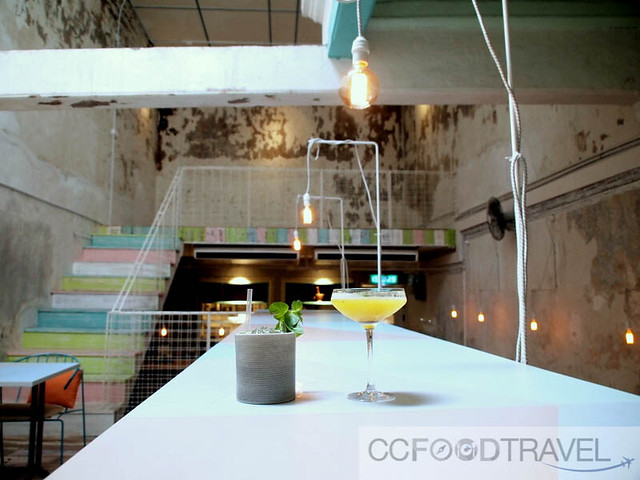 Muntri Mule and the Pisco Sour met at a bar.. 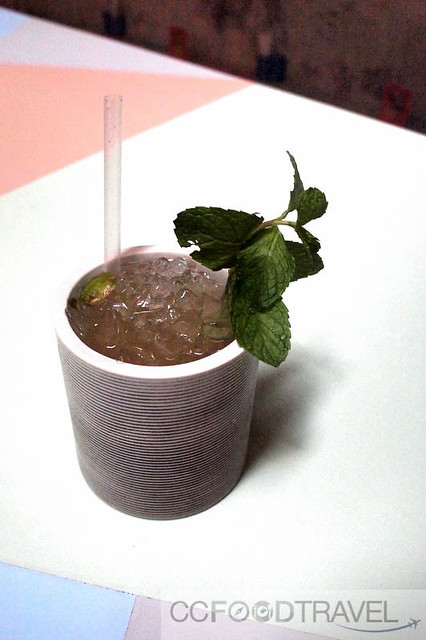 It would be odd to keep its original name of Moscow Mule when you’re on an exotic island in South East Asia. Why not just call it the street where it’s made? The spicy ginger and kasturi lime flavors were definitely a winner in our books. 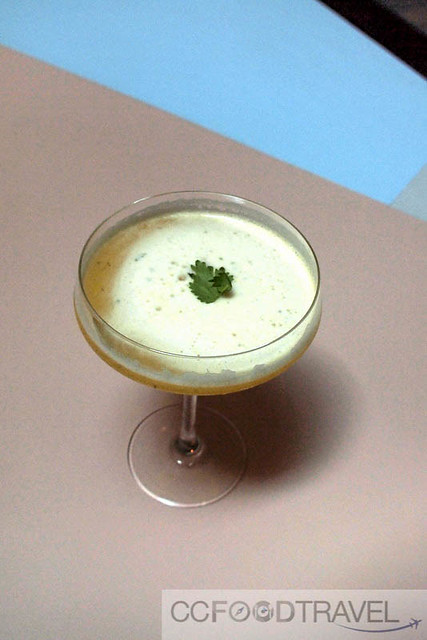 I’m not sure if Peruvians approve of any Piscos not made by the hands of their fellow brethren but we enjoyed it. The addition of black pepper, coriander and pineapple juice gave it a tropical south asian spin. Potent, sweet, sour, and with a cotton candy finish. Still, our preference was for the Muntri. 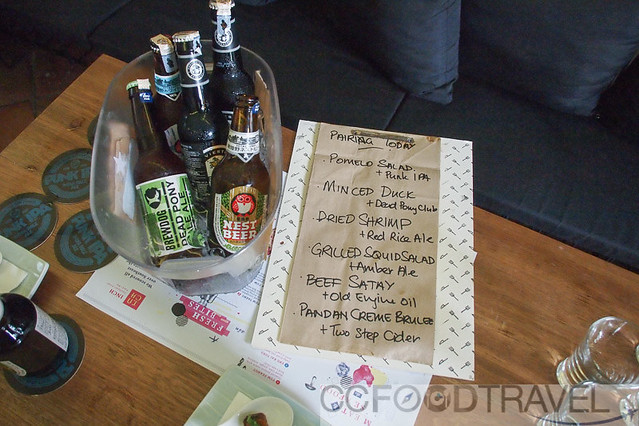 And speaking of craft beers, a table was set up to introduce 6 labels soon to be available at the bar. Each beer with its unique flavor notes were paired with bite size servings from INCH restaurant. Nowadays, it’s not just about drinking a beer at the bar but what one should nibble on with the beer in hand.

On sample were a range of beer from the US, Scotland and Japan. With hip names like Nest Beer, Red Rice, Old Engine, Punk IPA, Two Step, and Dead Pony, and a story behind each one of them from their brewers background to unique brewing process which give them their unique flavors. Patrons seeking new adventures at the bar can discover them here. I wondered if there were other bars in Penang offering craft beers. 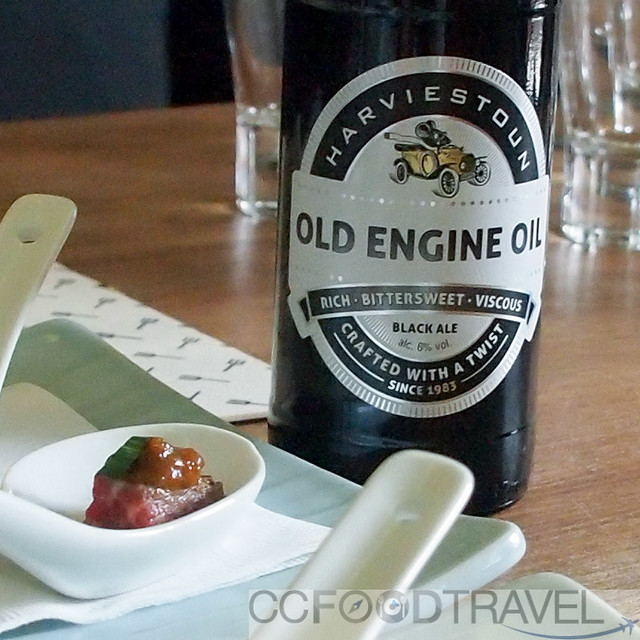 The Old Engine Oil poured out looking like a stout and tasted nearly as heavy, malty and creamy as a stout but it was labeled as a very dark ale. Stout is fermented with ale yeasts anyway. It certainly went well with INCH’s beef satay. 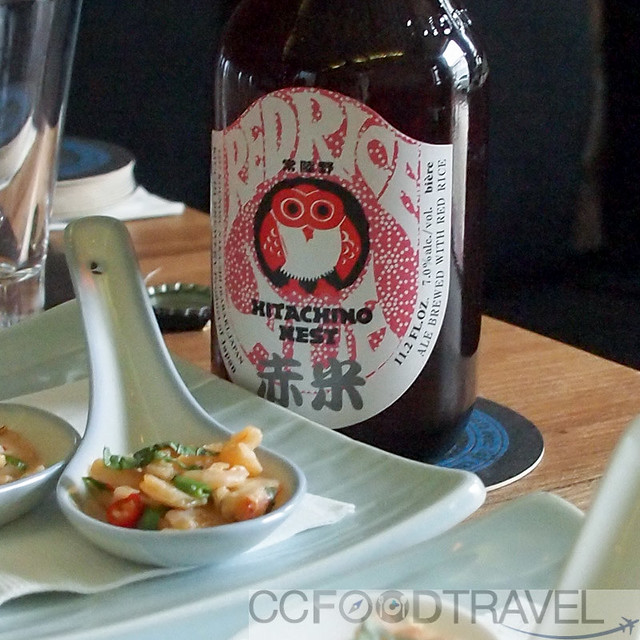 Red Rice was a light ale from Hitachino Nest. Sweet, non-bitter and slightly fruity. A decent tipple and complement to the super spicy dried shrimp. 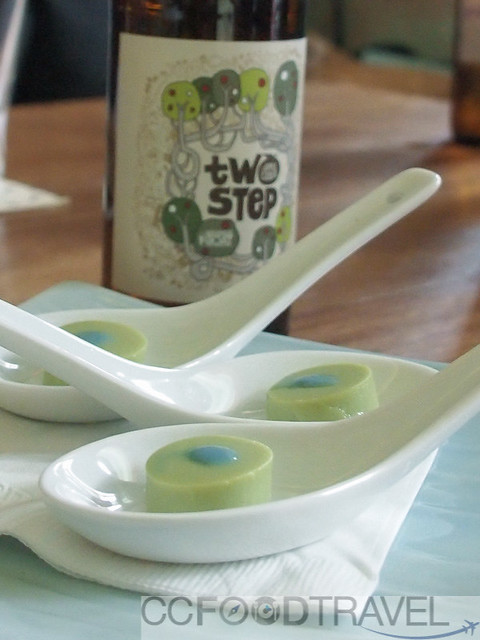 Cider aficionados, seeking a less sweet version of the  commercially available ones, would probably enjoy the Two Step. On its own, the chilled light apple cider fizz was great for the hot afternoon we endured. I actually preferred the Pandan Creme Brulee on its own. The pairing was a little strange for me.

Well, we thoroughly enjoyed this eventful day in Penang. It’s pretty obvious that Plate and INCH offers Penang a new dining and entertainment experience, so check it out and let us know what you think!

This morning, my husband had a craving. To satisfy this craving, we had to drive towards Zoo Negara… We saw a sign that said…