Berlin is well-known for being the most affordable city in Germany.

From its loins comes also that insanely addictive fast-food, called the Currywurst. 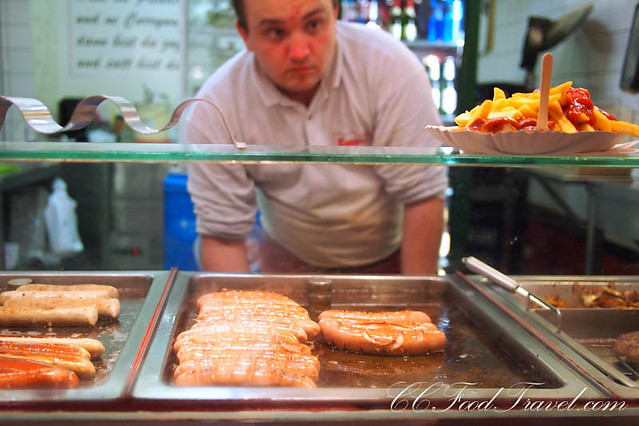 But is Berlin really the last affordable city in Europe? 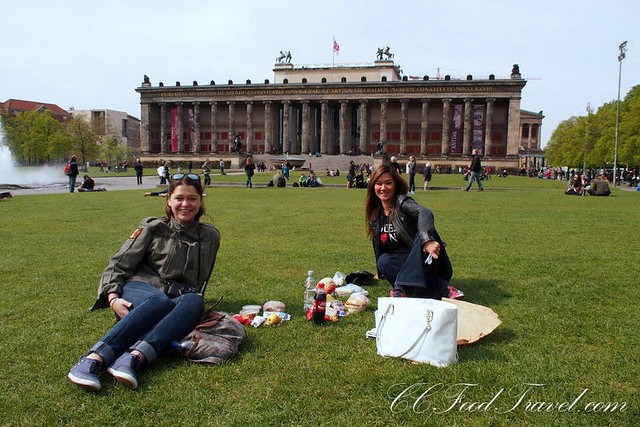 Well, if you are smart about your dollar, and don’t mind occasionally having a Currywurst for dinner, then rest assured that there are still affordable restaurants and a plethora of bars at happy hour prices to keep most folks happy. 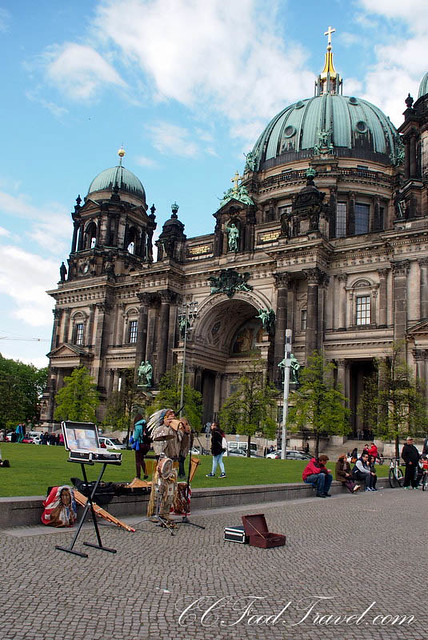 A must visit is Museum Island  – There are 5 museums on the island, including the Altes Museum by Berlin architect Schinkel. Inside there are Ancient Greek and Roman statues and pottery. Behind it, the Old National Gallery and the Pergamon Museum where you’ll find the Pergamon Altar, an entire two-story Ancient Greek temple, and the Ishtar Gates – the Gates of Babylon.

Still for some of us, Berlin’s charm is in sun-basking and picnicking on the parks, and losing oneself in a whole afternoon, strolling along the Berlin Wall, visiting memorials, churches, museums, weekend markets or galleries where you can experience Berlin’s vibrant and varied art scene for no cost at all. 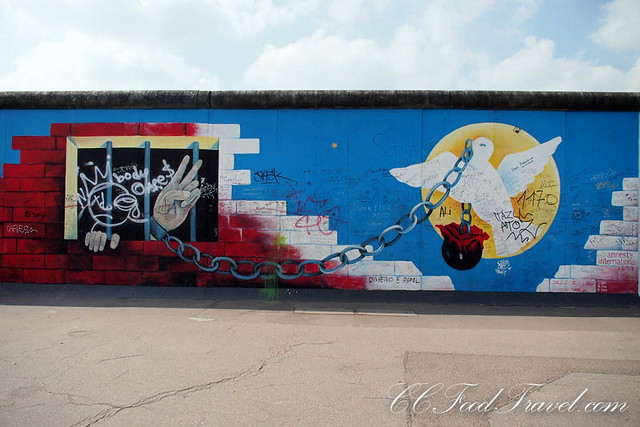 The Berlin Wall – between 1961 and 1989, the formidable East German fortification stood 156.4 kilometers long, fully encircling what was then West Berlin. Nowadays, the longest surviving stretch, the East Side Gallery on Berlin’s Mühlenstrasse, extends about 1.3 kilometers and can be seen in its entirety on foot within 20 minutes. 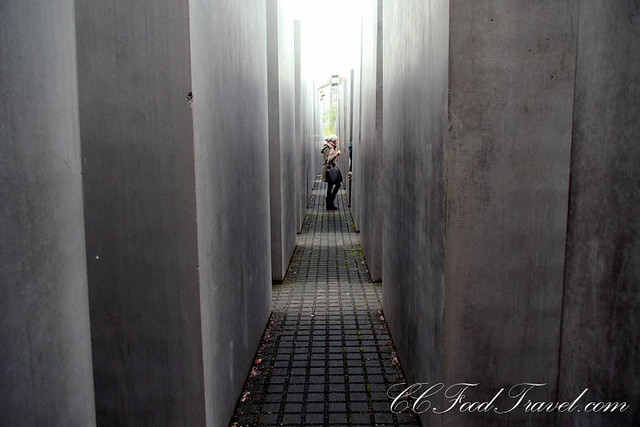 The Memorial to the Murdered Jews of Europe, also known as the Holocaust Memorial, is a monument to Jewish victims of the Holocaust, designed by architect Peter Eisenman and engineer Buro Happold. It consists of a 19,000 square meter site covered with 2711 concrete slabs or “stelae”, arranged in a grid pattern on a sloping terrain. Stelae are 2.38 meters long, 0.95 meters wide and vary in height between 0.2 meters and 4.8 meters. 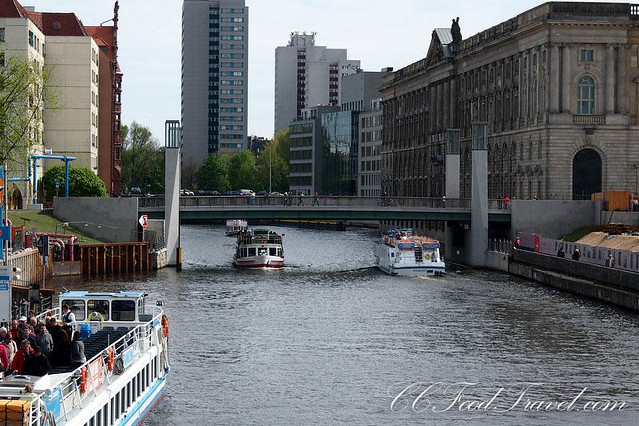 Ferry boats and cruises on the River Spree.. 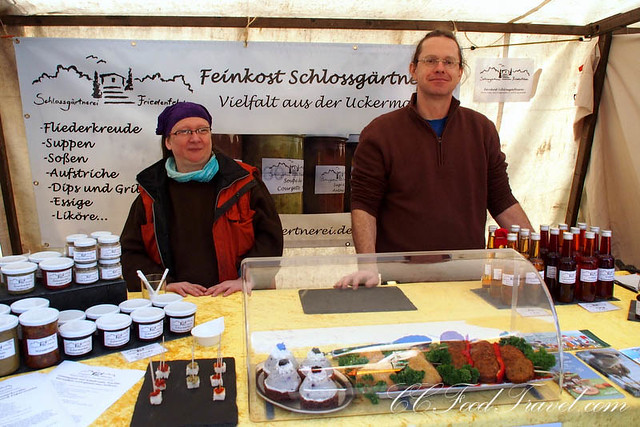 Yes indeed, plenty of activities to keep oneself occupied, and at little cost.

The good news is that the city also has a fair number of trendy hotels that won’t bust your budget. One of them is Mövenpick, which opened in 2004 in what used to be West Berlin, and situated in a rather strategic location, so long as you plan out what you want to do and see.

But first, the Currywurst. 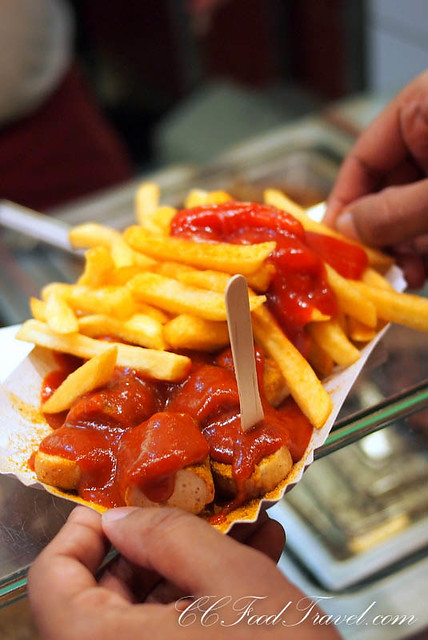 Curry 61 on Hackescher Markt.. seemed like a random stop but jackpot! Not a bad Currywurst stall at all;)

Currywurst is as German as pizza is Italian, hot dogs are American, and fish and chips British. Berlin’s favorite fast food has a cult-like following and even its own museum too! However, my favorite currywurst shop can be found on the streets of Berlin. In Germany, currywurst, the traditional proletarian snack of deep-fried sliced pork sausage swimming in a oil and a curry tomato sauce, merits a memorial. The sauce is thick, sweet and has a cloyingly fake curry flavor. It is, what I like to call, disgustingly addictive! This particular one Curry 61, is pretty awesome. You can buy your meal then take a stroll down to Monbijou Theather by the river, and have your snack there with a couple of icy cold German beers purchased from its Strandbar. That’s the life I tell ya. 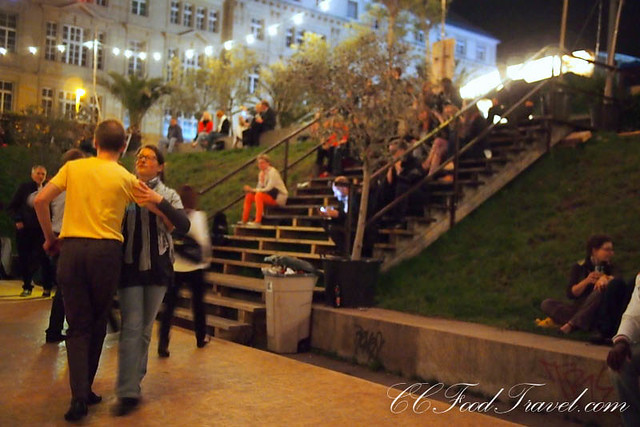 Yes indeed, if raving for 3 days and 2 nights straight at the Berghain is not your thing, then you may rather sit by the river, nursing your Currywurst and watching elderly Berliners dancing circles round the younger couples, for as long as you like, and on a warm evening, I can sit for hours just people watching.. 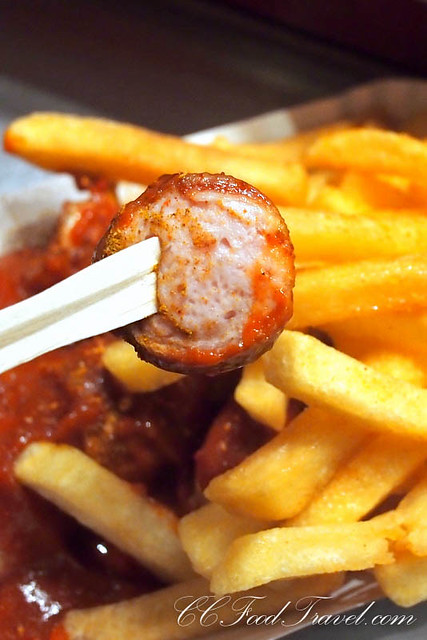 Many claim to have invented currywurst, but the Deutsches Currywurst Museum traces it back to post-war Berlin in 1949, when the city still lay in shambles. It was a “poor man’s steak” because most Germans couldn’t afford a proper chunk of meat. I sort of have a love hate relationship with it. Everything is deep-fried and greasy and tastes so damn good.. but it is so bloody bad for you. And to wash it all down, more deep-fried chips and beer. Talk about artery clogging food. Ah, no matter, some of the nights when I was dateless in Berlin, I had a warm Currywurst in my lap for company and I was happy. 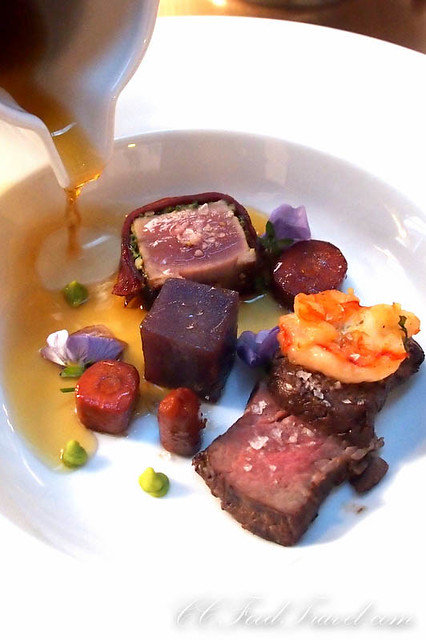 On other nights though, I rather dined is style. By style I mean, trendy Modern Cuisine, thanks to Chef Arne Buschow, Chef de Cuisine at Mövenpick Berlin where I had the pleasure of staying a couple of nights.

About the hotel Movenpick..

While the neighborhood isn’t exactly picturesque, it certainly is convenient. The famous Potsdamer Platz and the leafy parkland of the Tiergarten both within a brisk 15-minute walk. Brandenburg gate is slightly further but for me, the runner, it’s merely a 20 minute jog away. 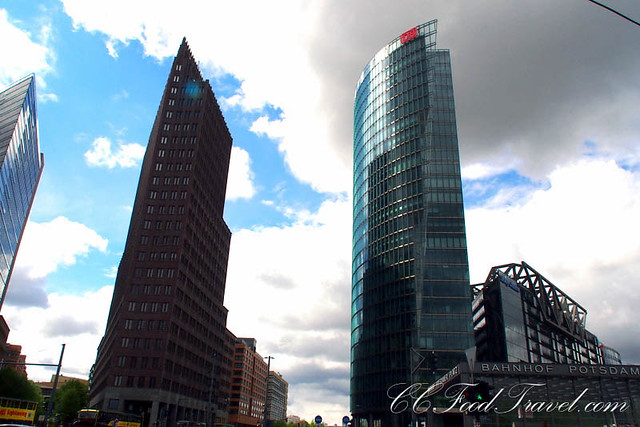 Berlin’s Potsdamer Platz is the most striking example of the urban renewal that turned Berlin into the ‘New Berlin’ in the 1990’s. The area today consists of the three developments known as Daimler City or the DaimlerChrysler Areal (1998), the Sony Centre (2000) and the Beisheim Centre (2004), which literally transformed the dormant wasteland where the Berlin Wall stood between east and west Berlin until 1989. 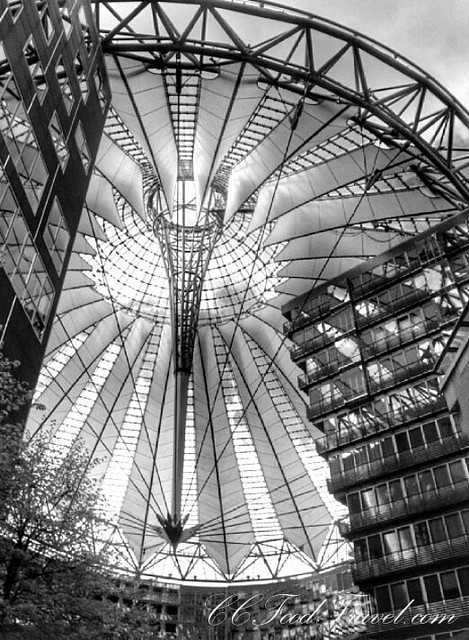 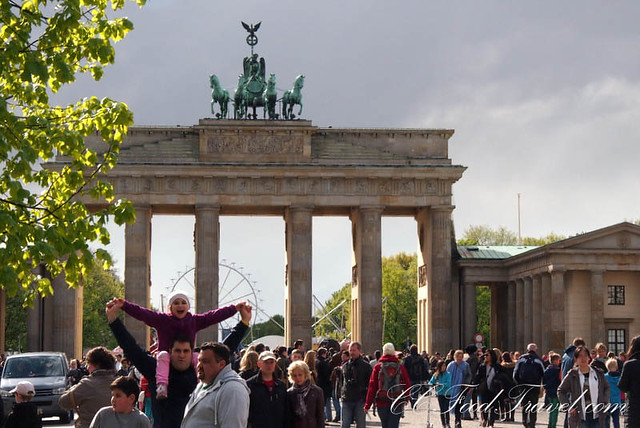 Brandenburg Gate was commissioned by King Frederick William II of Prussia as a sign of peace and built by Carl Gotthard Langhans from 1788 to 1791. The Brandenburg Gate consists of twelve Doric columns, six on each side, forming five passageways. At the top of the door is the quadriga, a chariot drawn by four horses and driven by the Roman goddess of victory. The Gate´s design is based upon the Propylaea, the gateway to the Acropolis in Athens.

Fantastic because I ran every morning – and when you see how I ate, you will understand why. In fact, getting anywhere in the city is easy – the Anhalter Bahnhof S-Bahn stop is just a block away in one direction and the Mendelssohn-Bartholdy-Park U-Bahn stop is two blocks in the other. And a taxi stand, with an ever-present line of cabs, is steps away from the hotel’s entrance! I really loved this hotel. 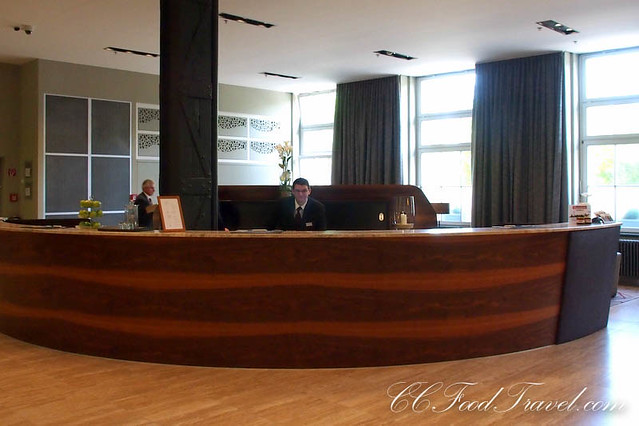 Once you enter the Movenpick’s lobby, it’s pretty stark but the friendly front desk more than make up for it. There’s complimentary WIFI at the lobby area and several computers where guests may print documents too which is convenient. 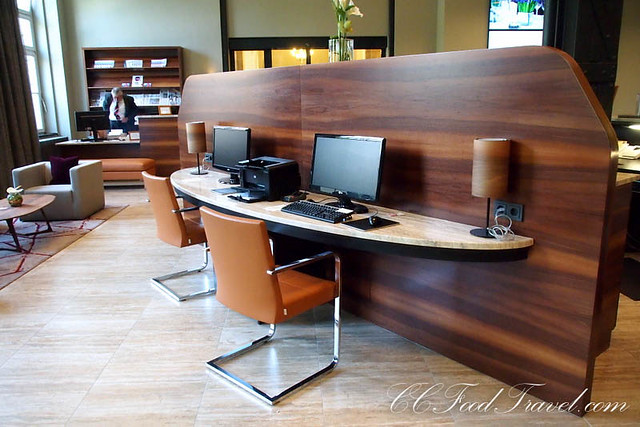 The rooms are funky and chic. Loved the sloping ceiling and the brightly colored Eero Saarinen-esque chairs, TV, on-demand video and of course the all essential WIFI. 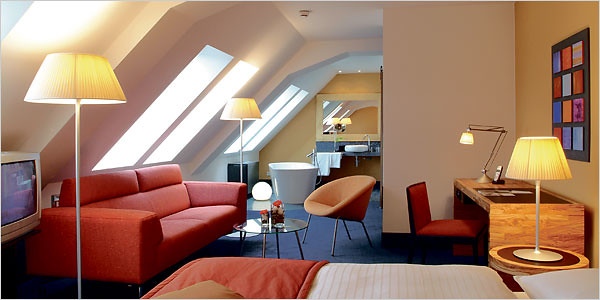 Opaque glass walls separate the main rooms from the bathrooms, which feature deep-soaking tubs as well as a shower head. My room the deluxe, had a funky free-standing tub in it, which was nice. 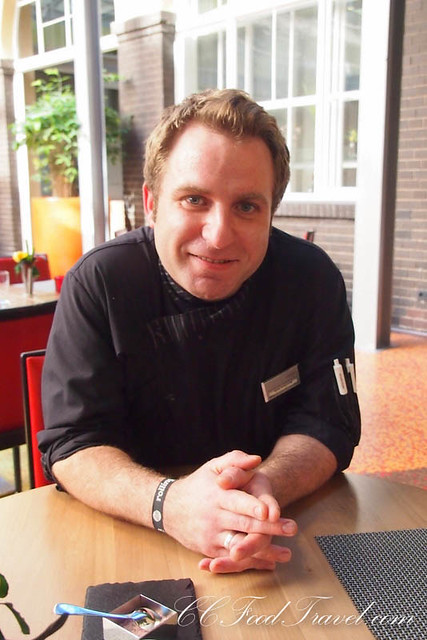 But the really surprising thing here for me, was the cuisine. I wasn’t expecting much, but Chef Arne really bowled me over with his fine cooking. 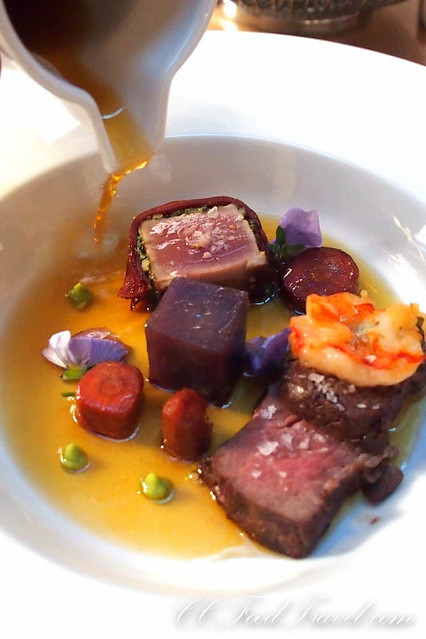 Beautifully and exquisitely plated beef consomme.. this was summer on a plate. Spot on in a symphony of flavours and textures. 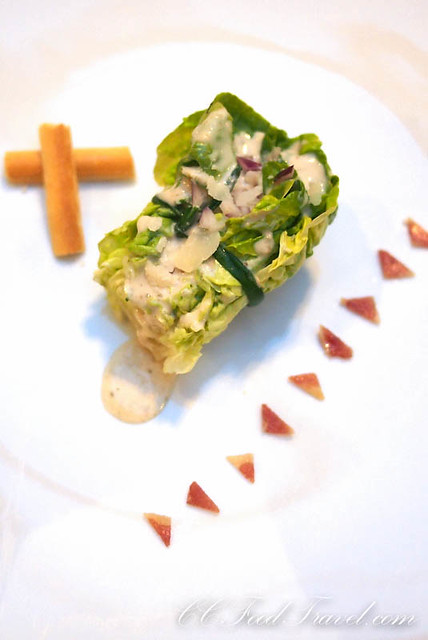 A rather cute parcel, which was actually a Caesar Salad! 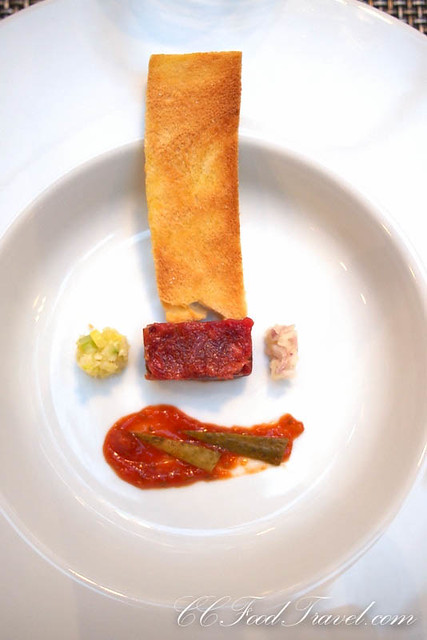 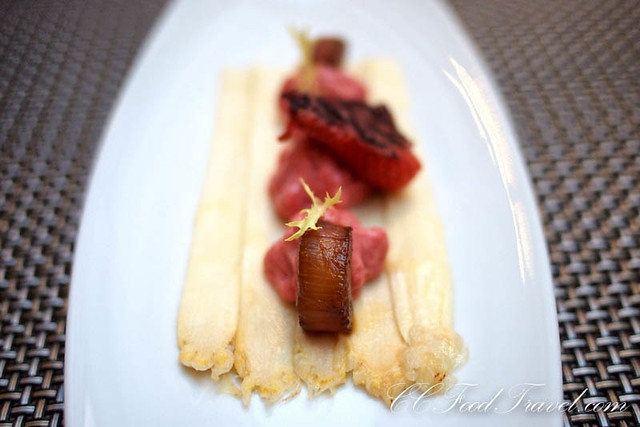 Luckily for me, it was the season of the White Asparagus – plump and juicy these were my all time favourite vegetables, that will ever remind me of Berlin 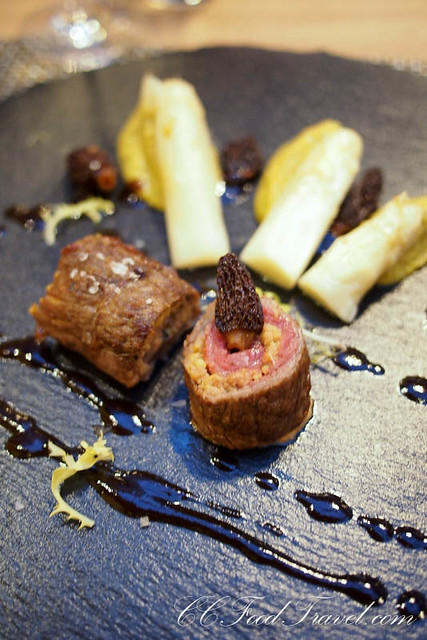 OMG, I die a little each time for morel mushrooms and their earthy, intense flavour. These were delicious, explosive parcels of juicy sweetness! 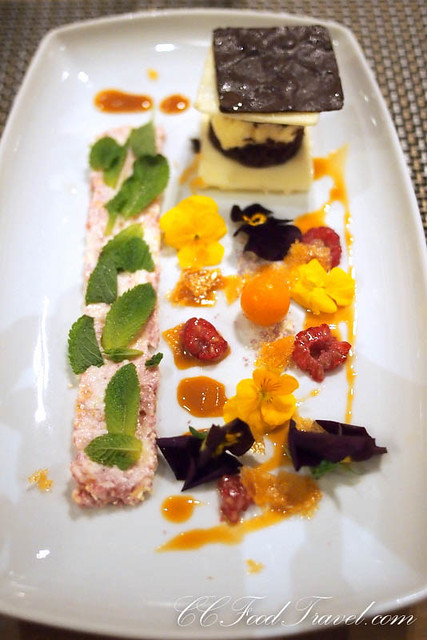 Beautifully dark and white chocolate dessert with edible flowers seals the deal. An amazing dinner, not to be soon forgotten.

Well then, Movenpick hotel may not be in the heart of the Mitte, but what you give up in location, you gain in affordability, with rooms starting at about 100 euros a night. This really was a great hotel serving impressive haute cuisine, which I won’t soon forget. 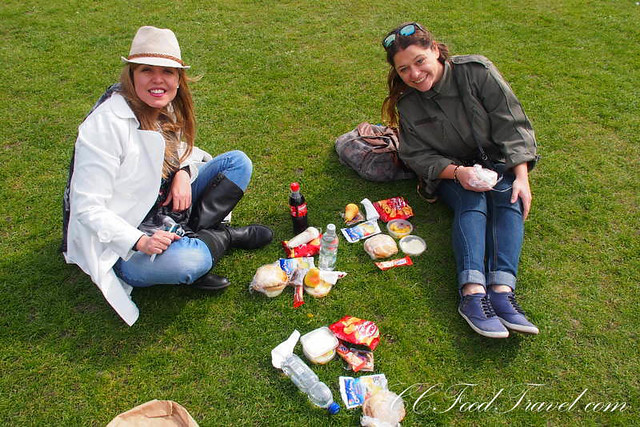 However, having said that, there’s only so much fine food my stomach can take, so, inevitably, I find myself crawling back to that street side shop, in Hackescher Markt , to pay homage to my old friend the Currywurst.

But then you see, most Berliners would nod their head in agreement with me when I say, that there’s no shame in that.

And if  fine-dining is your thing then, check out these Michelin Star Restaurants in Berlin, you won’t be disappointed!

I remember it was around the middle of last year that Lyrical Lemongrass talked to me about  bento art, and wanting to try her…