A recent Glenmorangie whisky tasting session, was different, as it saw us walking into a multi-level art gallery, the Wei-Ling Gallery, in an old building, located in an old part of Kuala Lumpur, called Brickfields. Back in the day, the area’s prominence had been due to large a brick making factory (hence the origin of name), which aided in the redevelopment of Kuala Lumpur after a flood devastation in 1881. 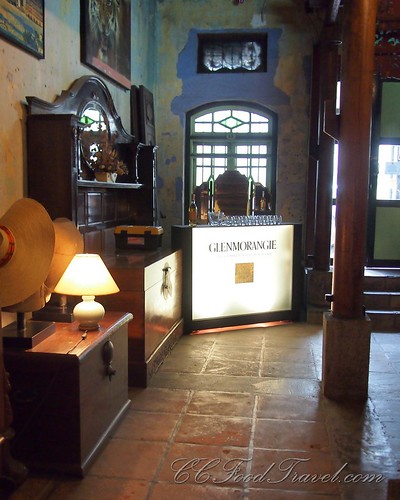 So, what about the whisky? Well, Glenmorangie actually started its production about 40 years earlier and some of its whiskies might have arrived with the British occupiers during this period. The long illustrious history of the whisky brand certainly suited this heritage building, which had obviously withstood the test of time, and a place where we would soon discover the premier taste of The Original, Nectar D’or, 18 years,and Signet. 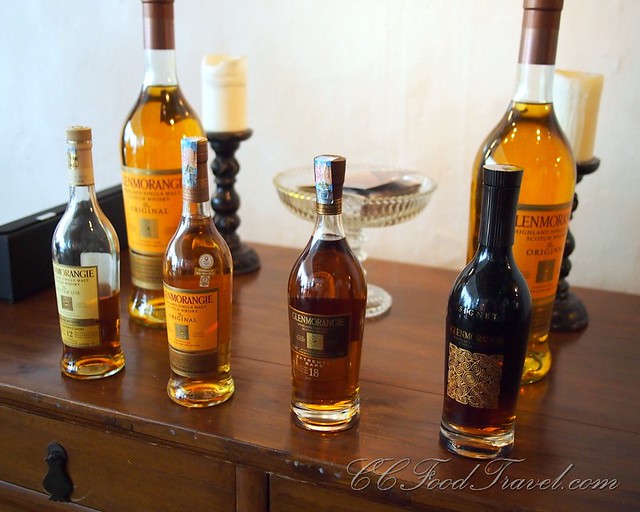 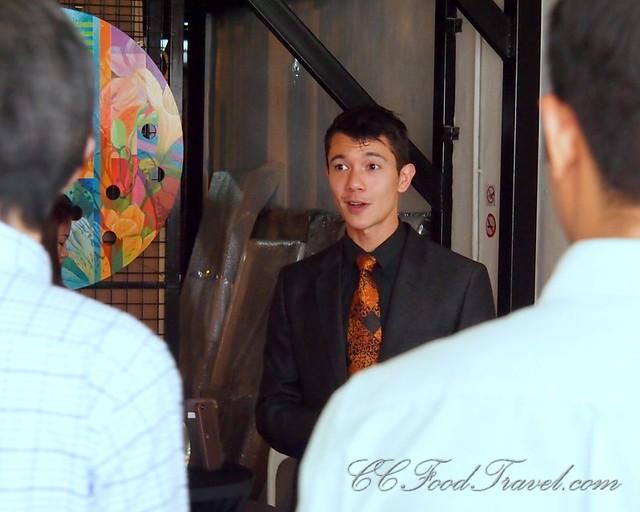 William Quah warms up the small gathering for Dr. Lumsden 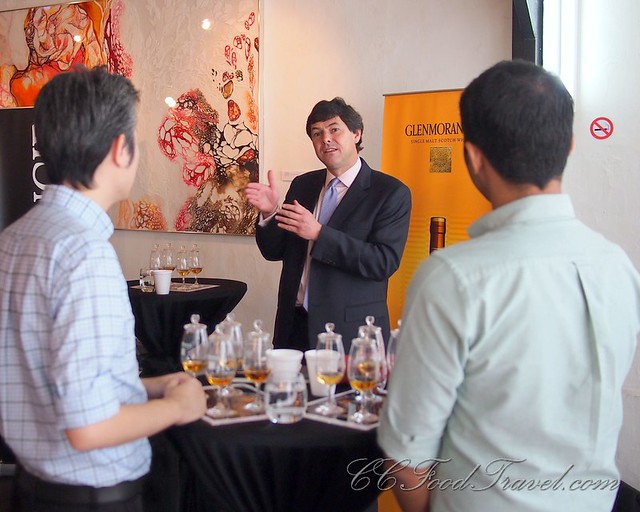 Our tasting session was helmed by a Scotsman, Dr. Bill Lumsden, the Head of Distilling & Whisky Creation for Glenmorangie. Regarded as an innovator of whisky production in the industry and equipped with a PhD in Biochemistry, you could say that he was a rather important figure as he was in fact, the man tasked with handling the current production of the entire Glenmorangie range. He was the only person to have been honoured three times with The Malt Advocate ‘Industry Leader of the Year’ Award; in 2001, 2006 and 2008. Dr Lumsden was also awarded the IWSC ‘Outstanding Contribution to the Industry’ in 2010. 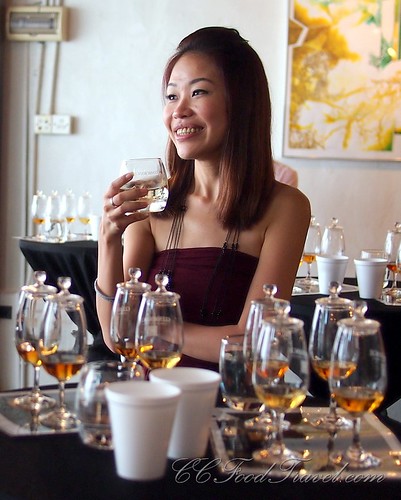 A lass of the whisky brand

When he is not traveling the world looking for the best oaks casks and researching latest techniques in whisky production, he walks into rooms to impart knowledge on the production, and how to recognise and appreciate the unique characteristics of each Glenmorangie whisky, with whisky aficiandoes or persons new to the spirit. We were definitely privileged to be in the presence of Dr. Lumsden. 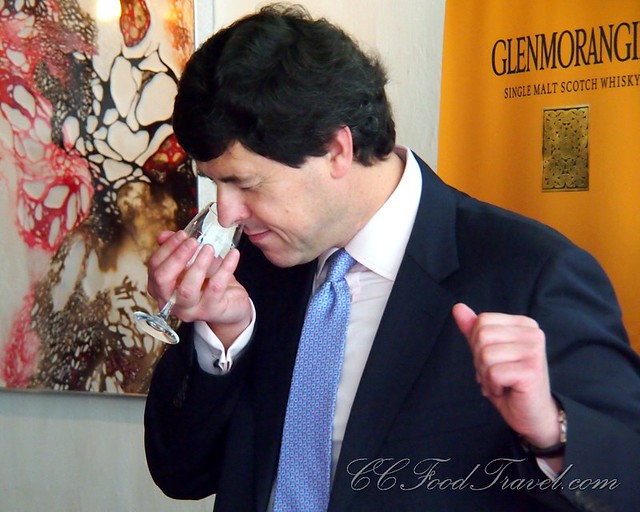 The passion of whisky is deeply ingrained in Dr. Lumsden’s olfactory senses and veins 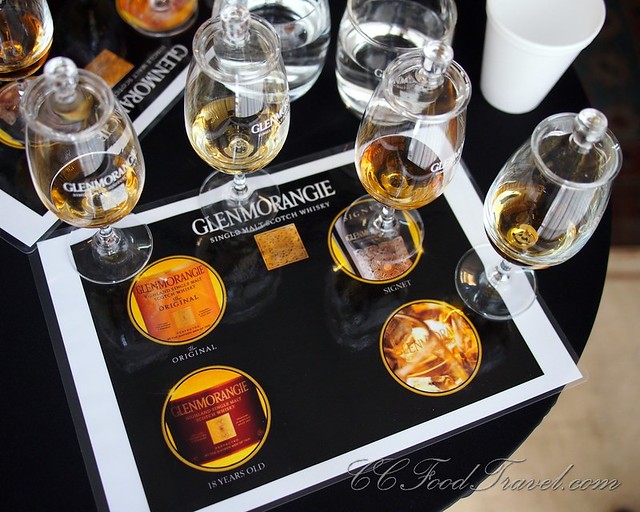 Our tasting portions of The Original, 18 years, Signet, and Nectar D’or 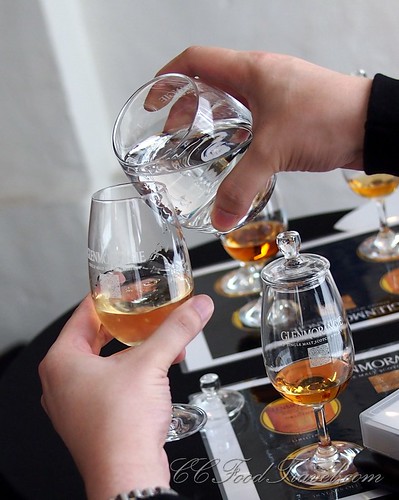 Some water is added to open up the whisky characteristics

Dr.Lumsden in a typical Scottish fashion, had a very approachable demeanor and mixed his technical details with humour and casual banter. The convivial atmosphere in the room exemplified how whisky could be drunk for any occasion, with friends or by yourself. Dr.Lumsden says you can enjoy any of the whiskies the way you like, whether neat, on the rocks, with water, choice of food and so forth. 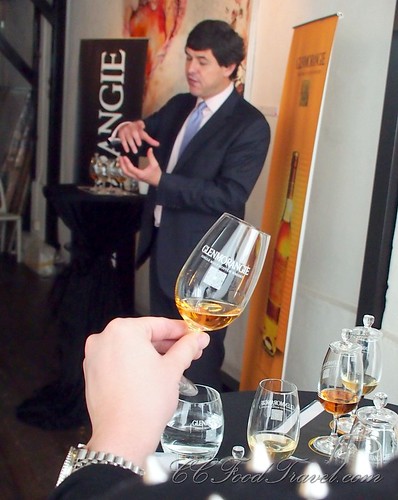 Dr.Lumsden preparing Hadouken before blowing away the non whisky believers (with his knowledge)

For each of the tasting portions, we were led through a process of identifying color, aroma before warming the glass in our hands then tasting the whisky neat and then followed by tasting it with some water added. The spirit in neat form being highly concentrated in flavour and alcohol maybe difficult for many to decipher the complex aromas and notes. The addition of water diluted the complexities for easier recognition. 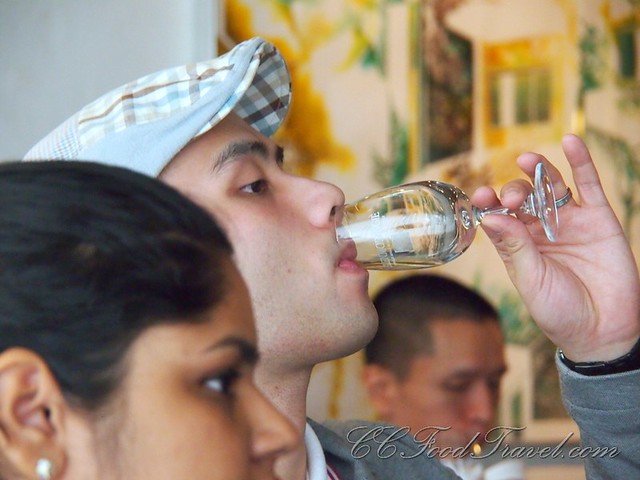 The Original is a pale lemony 10 year old whisky with 40% alcohol by volume (ABV), produced in Scotland’s tallest stills then matured in American white oak casks. Touted to have a floral, elegant spirit, our noses smelt herbal aromas which Dr.Lumsden broke down to geraniums, sweet honeysuckle with eucalyptus, nutmeg and ginger. Beyond the smokey overtones, the whisky tasted of orange and peach fruits with fennel and nutmeg spices. 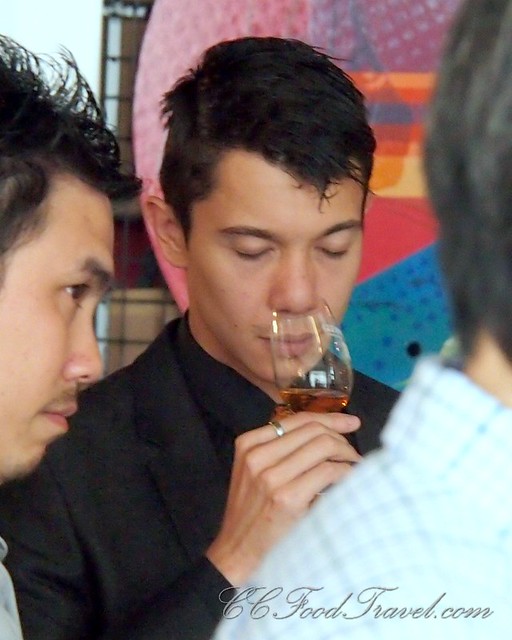 Consumed by the scents of distant lands and fragrant aromas

The Nectar D’or is a 12 year old spirit with 46% ABV. It is distilled in Glenmorangie distincted stills then extra maturated with Sauternes Casks from France. Dr.Lumsden describes the aromas to have tangy citron and gingerbread cakes with ginger and nutmeg spices found in a French bakery. We tasted a smooth lemony tart with hints of ginger and nutmeg. 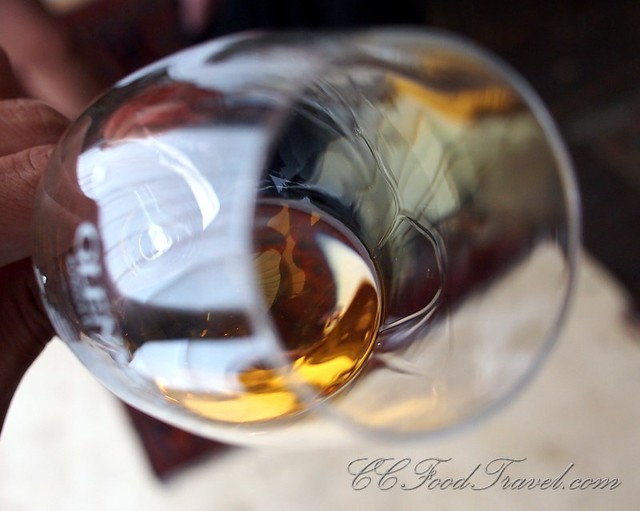 The 18 Year Old is a honey gold coloured whisky with a rich bouquet and full, rounded flavour with 43% ABV. It is matured for 15 years in American white oak casks then approximately 30% of the spirit is transferred into Spanish Oloroso casks for a further three years maturation before being blended back together. It had aromas of sweet with dried fruits, walnut and a complex floral fragrance of geranium, jasmine and narcissus. With water added, an aroma of rich woody oak, apricot and date aroma emerges. The taste is full flavoured with melting honey, creamy malt and floral notes and syrupy nuttiness of hazelnut and walnut, enveloped by a smokey wood taste, then with an aftertaste of sweet dried fruit and Oloroso sherry. 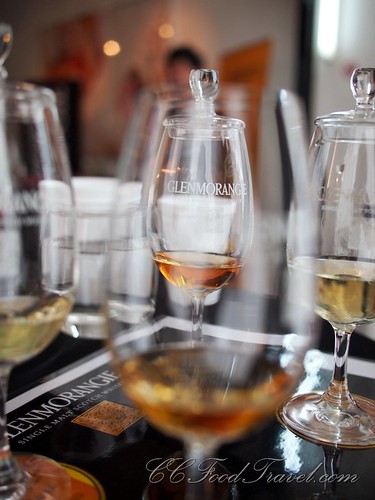 Signet, is the dark horse of Glenmorangie, as Dr.Lumsden puts it. It s a 46% ABV spirit in a very dark amber. This rare and exclusive whiskey is made with high roasted chocolate malt and blended with Glenmorangie’s oldest whisky distilled over thirty years ago. It is matured in a selection of the world’s finest casks. The aromas accentuate an intriguing musty cocoa notes with expresso or fresh mint. 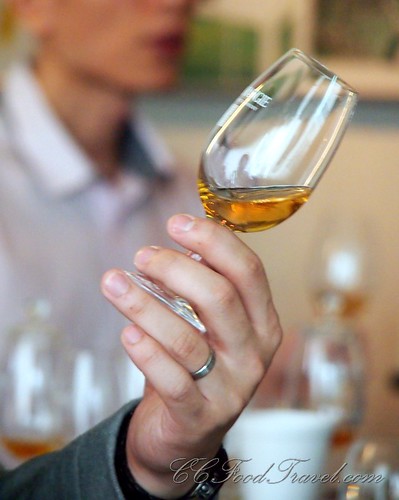 With water added, smells of plum, sherry, candied orange peel and spices of ginger and cinnamon appear. The Signet tasted of bitter mocha with cinnamon and ginger spices, then apricots and walnut. A bitter-sweet flavour with lemony aftertaste. A truly magnificent whisky we have had a rare chance to taste. Dr. Lumsden mentions that it goes well with a cup of good coffee and it probably will. 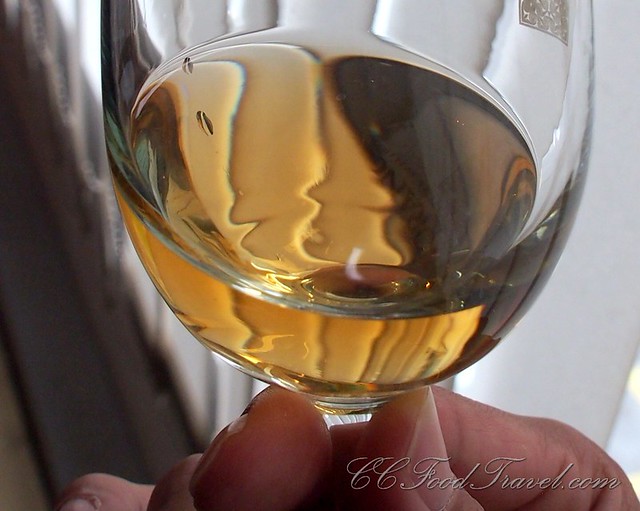 With a head full of facts and a stomach full of whisky, I stumble to my car, happy to have had the chance to partake of this fine Whisky Masterclass. Some of the Scottish humor and jokes were still ringing in my head, as I started the engine, but somehow they didn’t roll off the Malaysian tongue as well as gentleman’s I met earlier;)