Since beginning his acting career in 3rd Rock from the Sun, the hit American sitcom from the late 90s, the actor Joseph Gordon-Levitt (JGL) has evolved into acting in non-mainstream movies. Shunning the conventional Hollywood film production, he’s taken up interesting roles such as a mormon missionary in Latter Day, a mentally unstable juvenile in Manic, a child abused gay prostitute in Mysterious Skin, a teen detective in Brick, a young psychopath in Killshot, and a porn star fan in Elektra Luxx. In 500 Days of Summer he was a jilted lover trying to find questions and answers to his breakup with a girl he thought to be the perfect match, only to discover and finally accept that it was all just about fate and chance on meeting the right one. While I like offbeat movies, I never quite enjoyed JGL movies thoroughly. However, with a recent viewing of his latest flicks 50/50 and Hesher, this opinion changed. I can now say I really enjoyed at least one JGL movie. Well, I think I enjoyed The Lookout as well but my memory escapes me. His minor roles in more Hollywoodish films (eg. Inception and G.I. Joe) didn’t really showcase his performance. 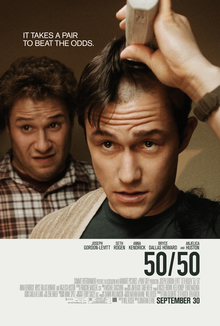 Directed by Jonathan Levine who’s other popular movie The Wackness depicts the life, love and tribulations of a New York city teen who sells dope, trades the herbs with a washed out psychiatrist, and also dates his daughter, didn’t quite do it for me. The street graffiti font used for the title of that movie was the most exciting part of the movie. It’s pretty much a teen drama and looks into substance abuse by a medical practitioner. In 50/50, JGL plays a healthy young radio executive, Adam, who doesn’t smoke or drink but discovers after a medical check up he has a very rare form of cancer which attacks his spine. At first unperturbed by this discovery, his life begins to spiral downwards as the impact of a 50-50 chance of survival hits him hard. He begins to question friendship loyalty, family obligations and lost opportunities in his selfish descent into emotional turmoil.

50/50 makes the topic of cancer more accessible to younger adults with JGL’s performance. While the topic is dreary, there is comic relief provided by Seth Rogen who plays Adam’s best friend, Kyle. I’ve never really enjoyed Seth’s comic sense but it really clicked with this movie. The humour elevated the serious drama tones to a lighter level, yet keeping the audiences tuned in. There are some really funny scenes which I won’t divulge here. The mix of humor and drama plus great performance by the entire cast (including a supporting role from Anjelica Huston) except for Anne Kendrik (I’ve never enjoyed watching her and have always felt she’s not suited to the roles she’s casted in), make this film worth the ticket price. To sum up, it’s a decent movie to watch and it won’t leave you in tears plus it has a good selection of classic and modern rock tracks to keep you grooving. The movie ends with Pearl Jam’s classic, Yellow Ledbetter. 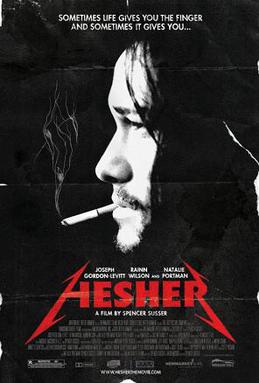 The anti hero movie. The first feature length movie for director Spencer Susser. Hesher is probably someone you might know, or know of, while growing up. He is the misunderstood guy. The guy that’s a little too dangerous to be around with but has some sort of good in him. JGL says Hesher’s character outlook is modeled after Metallica’s late bassist, Cliff Burton, and if you’ll notice, even the typeface resembles Metallica’s. Side note: Just an observation but I wonder if the name is derived from “he’s her”.

The film doesn’t explain much about Hesher played by JGL (which means an opportunity for a sequel or more popular these days, a prequel might be on the horizon), except that he loves to blow things up, he loves metal rock, suicidal tattoos, is self destructive, and has only a nut left (why? watch it to find out!). Hesher appears suddenly in TJ’s ( commendable performance by Devin Brochu) life and home after TJ accidentally ruins Hesher’s makeshift home. Young TJ’s life is a mess after his mother’s death. His father,Paul Forney (Rainn Wilson), is on a downward spiral with the loss of his wife. Their grandmother (Piper Laurie) tries her best to keep the family afloat and together but has her own issues on isolation. It’s a turbulent and touching tale about a kid coming to terms with losing a parent, seeing his other parent sink into depression, and reacting to a crush on an older girl (Natalie Portman) who rescues him from a bully. Young TJ is desperately seeking guidance, protection, love and inspiration but doesn’t know how and where to start. There is a linkage with the older Hesher who’s own self destructive behaviour could have been the result of the same voids in TJ’s life. Find out how the movie plays out by watching it. There is some dark humour, lots of drama and metal riffs.

Here, I too end with Eddie Vedder’s mumbling on Yellow Ledbetter. Enjoy.

THE BLOG HOP IS NOW BEING PLAYED ON SIX GBN MEMBER BLOGS. Please click here to find out where to play this week. ….