Why do C&C love street-food even if it means walking down dirty alleyways and the possibility of encounters with the unsavory, unshaven, uncouth sort  .. well it’s because we love the vibe, and occasionally, we stumble upon some really great food.

Oh, and the people. They totally crack us up too. They make us keep coming back to more. 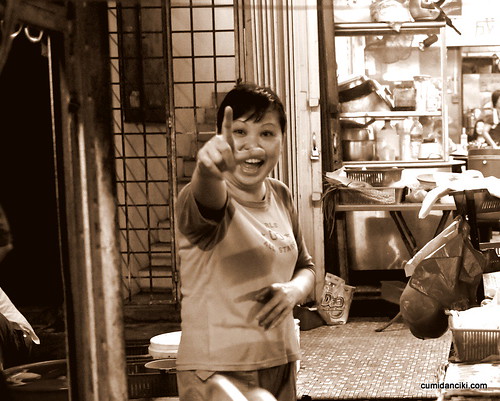 Hurry up and place your order… don’t get in my way! 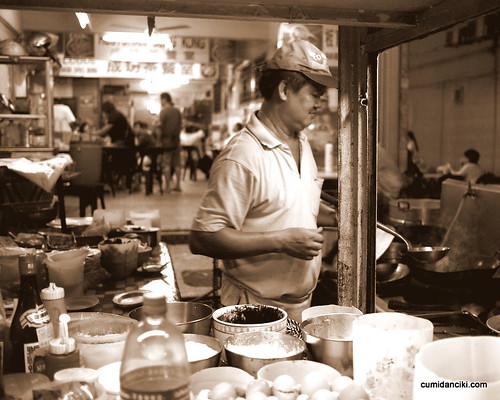 You have to wait.. 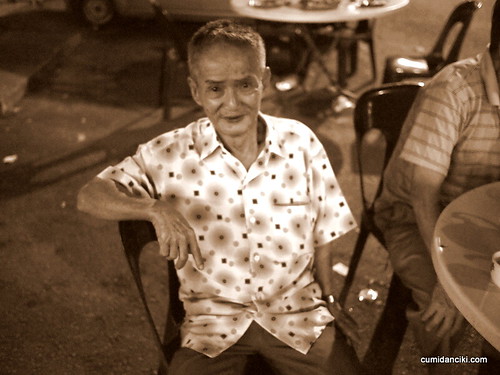 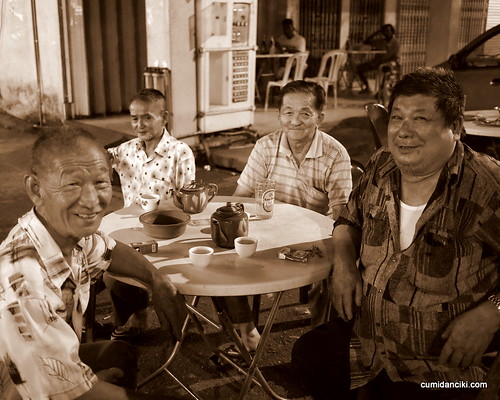 And we have “more saliva for chatter than tea” ..

Old restaurants are the best.

I soak up the energy. I unravel in the nostalgia.

Idol chatter to the untrained ear,

but heroic tales from the deep to the discerning.

Them, where they sit.. they are plotting :

Take our picture but be warned,

You now belong to our world,

You said you’d sit for some tea after the flash goes,

If you flinch we own you. 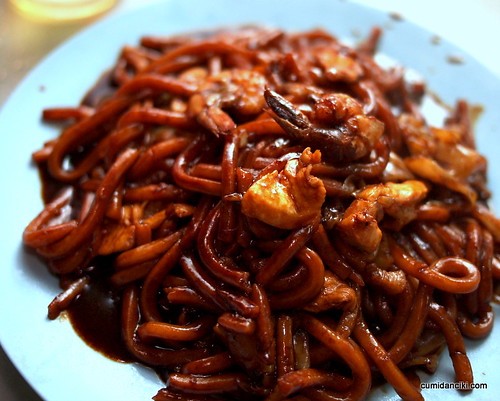 The Bold and the Beautiful, not to mention very Black, Hokkien Noodles

Yes, that’s right. Occasionally we find a good restaurant or two, that gets us as excited as a wolf in a chicken coop, a GI who is going home, a virgin on her wedding night. Extremely happy and eager to be sure.

Let me just say, that as much as we would like to take all credit for this shop, it really by an accident, that we stumbled upon it. C&C , on the way to eat our favourite Satay in Sentul, found the place closed. Rather than head on back the way we came, Cumi said let’s go deeper. Lo and behold, we came upon Seng Kong, packed with old and not so old folk alike and a prominent kitchen at the front. We made our choice and found a table to slink into. If not for the white flashy Olympus camera in my hand, I reckon we would have gotten away with being one of the Sentulites;)

The Hokkien mee here is GOOD. Greasy yet aromatic and full of ingredients, this is a must have. One small compliant though was the noodles tasted like they could have been fried just a tad longer. This would have allowed the noodles to imbibe the sauces better. Otherwise, this Hokkien Mee, gives the Tawakal one, a run for the money. 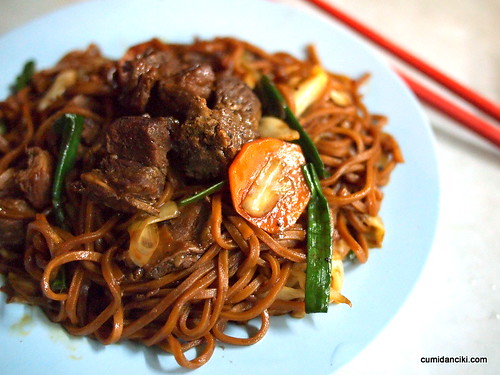 The Pai Kuat Yee Mee was our favourite of the night. A gorgeous eggy, flavourful noodle that really complemented the strong porky taste of the rib juices, this was a superb dish. The Yee Mee cooked al dente was a winner. 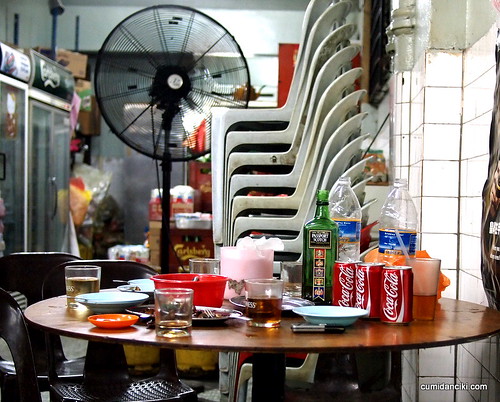 *passport whiskey is a Blended Scotch Whiskey that contains malts from Seagram’s Speyside distilleries.. however there are many popular imitations lurking around the Klang Valley.. 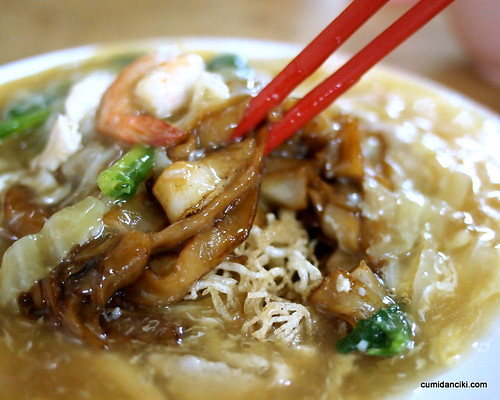 I was rooting for this dish to be awesome as well but was a little disappointed. I heart vermicelli-type noodles called “maifun” for the simple reason that they are so versatile. They grab sauces in much that same way that angel-hair pasta does, and they’re great in stir-fries! In the case of the Ying Yong, they actually deep fry the entire ring of vermicelli noodles to give it a crisp texture. They counter this crispy texture with the soft, chewy texture of the flat noodles called “kwey teow” , before dumping the piping hot, eggy sauce all over it. The combination of contrasting noodle textures when done right, is a feast to experience.  Sometimes I feel like street-food is as inspired as fine-dining.

Anyway, the Ying Yong here was so-so. It lacked that flavour oomph! that we were seeking. Oh, woe is me.. where can I find a GREAT Ying Yong? So far, the Old Town’s Taman Selera(Food Court) Ying Yong is still the one to beat. For us, anyway. 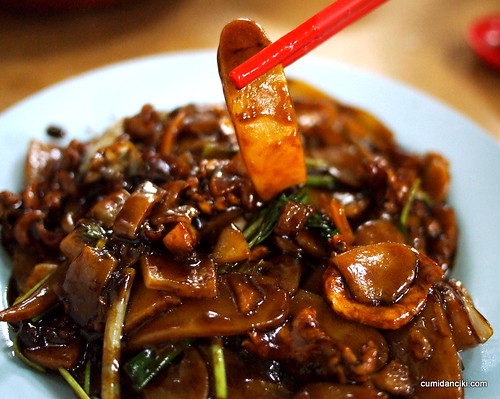 Another interesting dish is the fried sweet potato flour noodles a classic example of what a hot wok and a deft frying-hand can produce. These chewy slivers of  flour are characteristically plump, short.. resembling something not unlike flattened slugs, but I assure you they taste much better (I’m guessing, but yeah).  The aroma resembles the Hokkien mee and the delicious factor is contributed by the deep fried pork lard. There are also tons of cabbage, pork slices, prawns and in this case the ever so aromatic coriander which to me was a spectacular finishing touch to this dish. How often have I lamented the fact that Chinese Stir-fried noodles do not marry western herbs enough times to Cumi.. I was really happy that this particular dish, embraced the coriander! 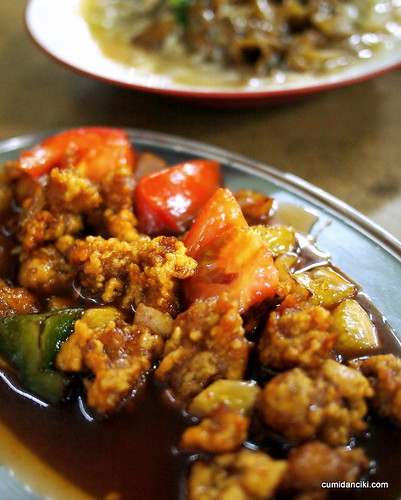 Not bad, but not great. Which brings us back the the recurring question- Where oh, where has our Sweet and Sour Pork dude gone? If you have been following our posts, you will know that once upon a time, C&C fell in love with the Old Klang Road Sweet and Sour pork. Then the old uncle upped and left and didn’t tell us (the audacity!) and thus, we have spent endless evenings scouring the earth for a worthy replacement, to no avail. C&C are getting desperate. Can nobody help us?! 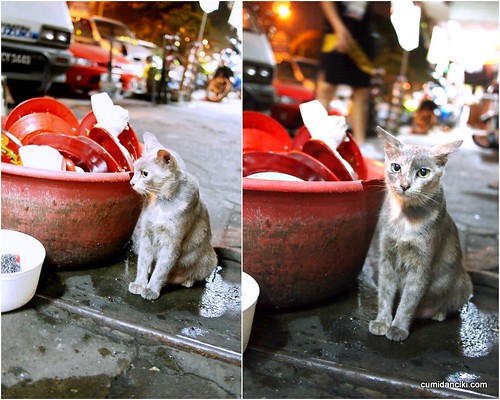 A cute cat, waiting to be fed..

All in all, Seng Kong is a delightful find.. and we will keep going back for more until a time they disappear or we disappear or the cat disappears. 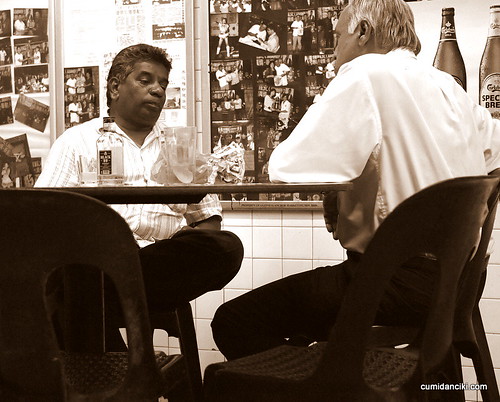 “Passport” to chat all night.. 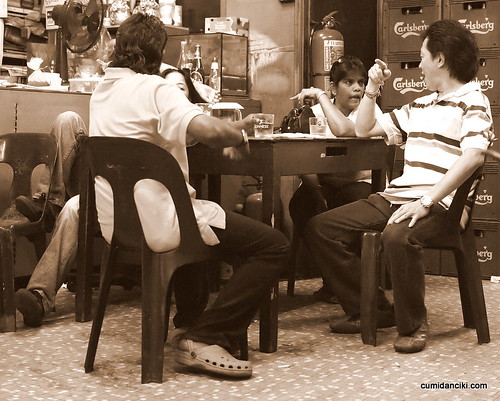 More importantly because I have a passport to be myself.