The Mooncake festival falls on the 15th day of the 8th moon, of the Chinese Lunar Calendar every year, meaning, it is just around the corner. 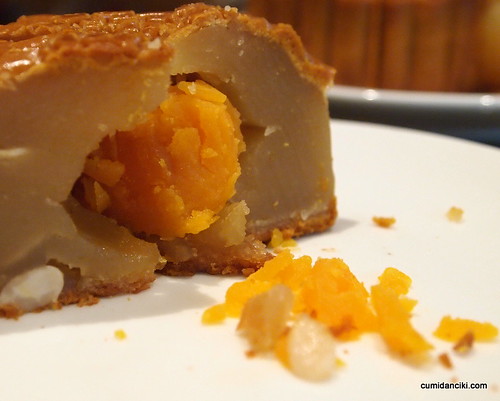 When you wish upon a moon..

In my country, this is a big deal for the Chinese who look forward to eating these little delectable ‘parcels from the moon’. No that’s not even completely accurate. Most people in Malaysia, even the non-Chinese look forward to eating Mooncake and this is the time where beautifully packaged Mooncakes are exchanged as gifts and tokens of appreciation. Many Chinese restaurants now have the ‘halal’ version of these sweet Chinese desserts and to tell you the truth they taste so good it is hard to tell which ones are halal and which ones are not these days. Not only that, the new buzz is for restaurants and mooncake makers to try and top each other in producing new contemporary flavours. From solid chocolate mooncakes to unusual yam or charcoal baked flavours, you name it, they’ve thought of it.. and now, it’s for sale!

Anyway, if you are wondering how it all started, the Mooncake Festival or Lantern Festival or Mid-Autumn Festival is believed to have originated from the ancient ceremony of Sacrificing to the Moon Goddess for the year’s end harvest. This is when families return to celebrate and give thanks for the year’s bounty. 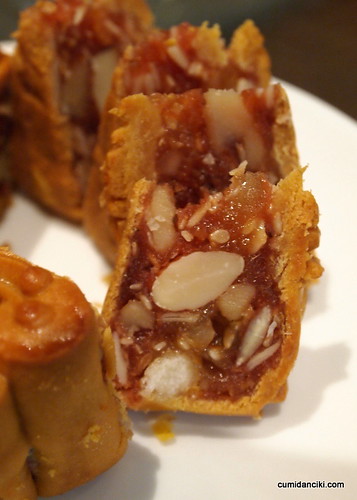 The Mid-Autumn Festival is a traditional festivity for the Han people of China plus the other minority tribes. The custom of worshiping the moon can be traced back for yoinks. The Han would sacrifice to the Moon Goddess in thanksgiving for the year’s crops and harvest. Families would return from the fields to celebrate – this was normally a time of reunion and mooncakes would be baked and exchanged as gifts. It was a really cool tradition to give 13 mooncakes as a gift because this symbolized a full year. Why 13? well, the extra one represents the leap year (my ancestors were really smart people!)

How did the Mooncake Festival become so widely celebrated?

During the Yuan dynasty, China was ruled by the Mongolians. Rebels plotted to overthrow the ruling government and they did this by baking tactical warfare instructions into the mooncakes. As the Mid-Autumn Festival drew near, the rebels ordered cakes baked and distributed throughout the villages.

Needless to say, the tactics worked and on the night of the Festival, the rebels with the help of local villagers, successfully overthrew the government! After this, it was the reign of the Ming Dynasty as we know it. And that my friend, is the true meaning behind the Mooncake.

So the next time you indulge in a piece of mooncake, make sure you gaze up at the moon and contemplate just how pivotal this innocent-looking, sweet dessert was in carving the fate and history of the Chinese.

Finally, there is also a version that is popular in Malaysia, I learned as a child..

Finally, there is also a version that is popular in Malaysia, that my grandma used to tell me when I was a little girl in Ipoh. There was once an archer, called Hau Yi and his wife, named Chang Er. As with most women, Chang Er was a busy-body who could not keep herself to herself, and decided to steal the pill of immortality from the Gods. When the God’s found out, needless to say, they were pissed off and as a massive punishment, decided to banish Chang Er to the moon. Well, if she really was that nosey a wife, I figure the Gods did Hau Yi a favour:P  Anyway, Chang Er is now whom we all know as “The Lady in the Moon”. If you looks closely you will always see the silhouette of a lady no matter how you look at the full moon.

Mooncake is celebration but mooncake is also creation.. 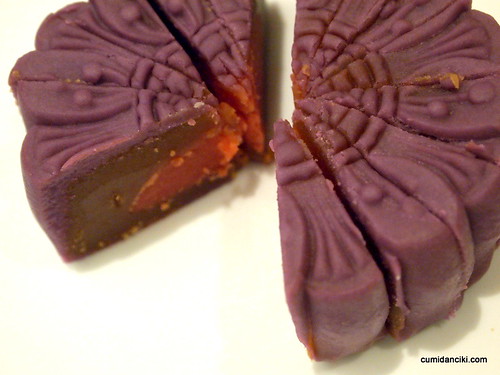 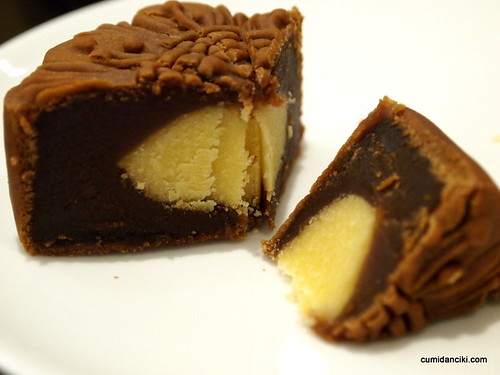 Espresso Chestnut
An extremely creative coffee skin and paste with chestnut to add a nutty flavour to the mooncake.. talk about getting nuts over mooncake! 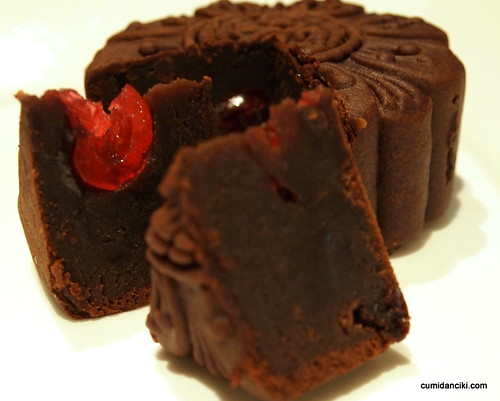 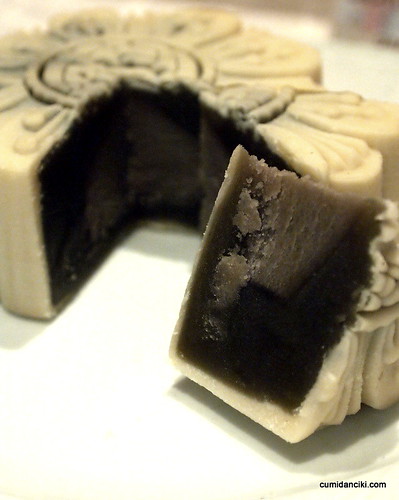 Delicious yam paste with tantalizing bamboo-charcoal skin.. one of my favourites! 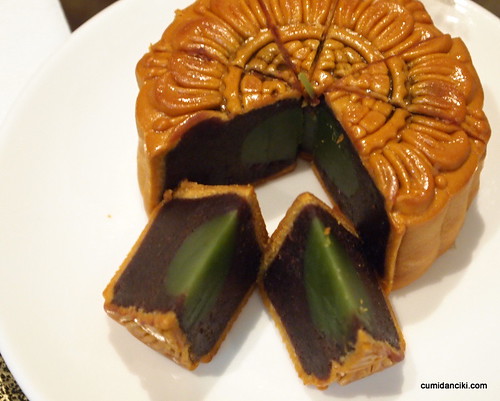 Red Bean Green Tea
This is the classic mooncake with a read bean paste and green tea center.. only for green tea lovers. 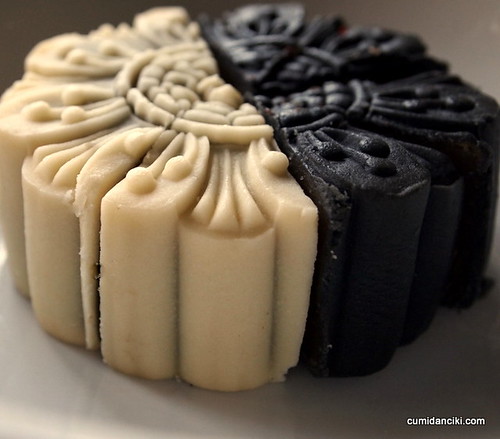 this Mooncake Festival.. make sure you balance your Yin and Yang..

Bamboo Hazelnut a unique combination of bamboo-charcoal skin with hazelnut paste and chocolate goes hand in hand with.. Charcoal-Baked Yam a gorgeous yam paste with an amazing, aromatic bamboo-charcoal skin. These two were by far, Cumi & Ciki’s favourites.

To conclude the story about the moon..

Anyway, to conclude this post.. back to the story of the moon. Moon gazing is not unique to Malaysia nor to just the Chinese. The Japanese also indulge in moon gazing in a festival known as the Tsukimi, but they enjoy eating rice dumplings rather than the mooncake. On the same day, Koreans celebrate Chuseok which is a harvest day celebration and they eat crescent shaped glutinous rice cakes known as Song-pyeon. In Vietnam on the same day, the Vietnamese celebrate Children’s festival where parents dote on their kids and make them mid-autumn cakes for tea. These delicious goodies are known as the Tet trung thu.

So my friends, this celebration of the Mooncake festival is not unique to just the Chinese and is celebrated across borders. Remember that the next time you chomp down on a delicious slice of the moon!

Add:
HOTEL EQUATORIAL KUALA LUMPUR
Jalan Sultan Ismail
50250 Kuala Lumpur
Malaysia
Tel: +60 3 2161 7777
Fax: +60 3 2161 9020
Check out their mooncake homepage here
Google Maps to Equatorial Hotel
The Mooncakes featured in this post are from the Equatorial Hotel Kuala Lumpur, and they include both classic as well as contemporary flavours. Contemporary flavours range from RM18-19 per piece whilst the Original range from RM14-20 the most expensive being the double yolk. All these mooncakes are all HALAL.