When Sandakan was officially recorded in western history books in the midst of 19th century, its founder and early trader William Pryer called it Elopura or ‘Beautiful City’. Later on, it was known as Little Hong Kong, either due to the town harbour’s semblance to the original island city when viewed from the sea, or the large population of Chinese residents originating from Guangdong province. The town had once been a thriving place where trades of pearls, tobacco, camphor, bee’s wax, sea cucumber, edible bird’s nest and timber were in abundance. This led to the harbour city’s claim of having the highest concentration of millionaires in the world. 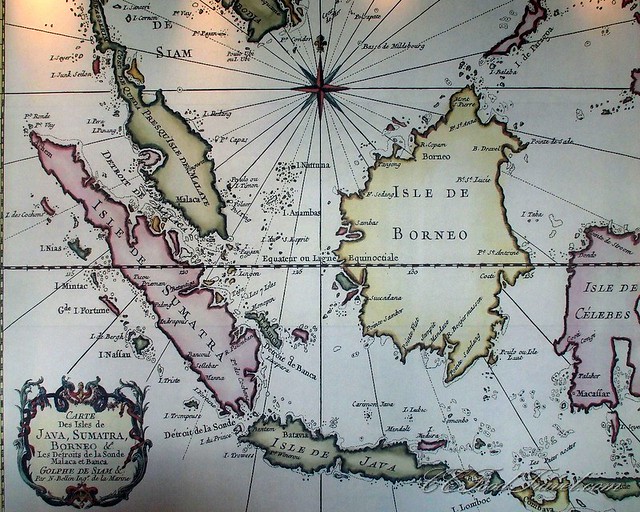 Sandakan today is a busy city undergoing a major face lift. A new business district has been built on the waterfront paving the road for bigger prospects for its residents and investors.

Here is our list of the top 12 things to do when you are visiting Sandakan. The list is not ranked in any particular order. 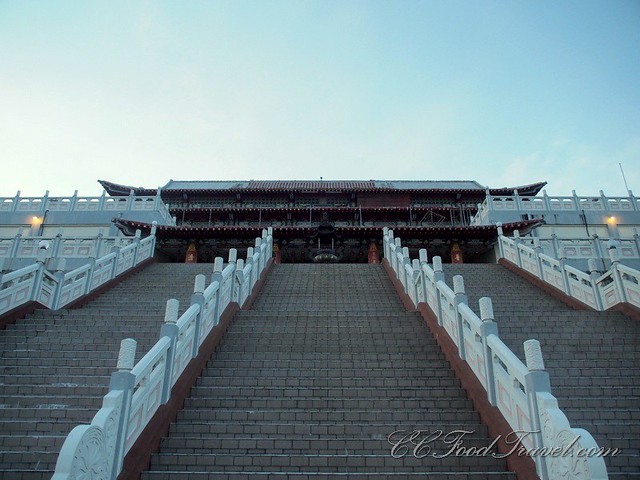 4 kilometers out of town, built in 1987 on a hill facing the sea, this relatively new temple’s interior has several large bronze buddhas, fierce looking deities, and ornate pillars of large intertwined dragons and phoenixes. 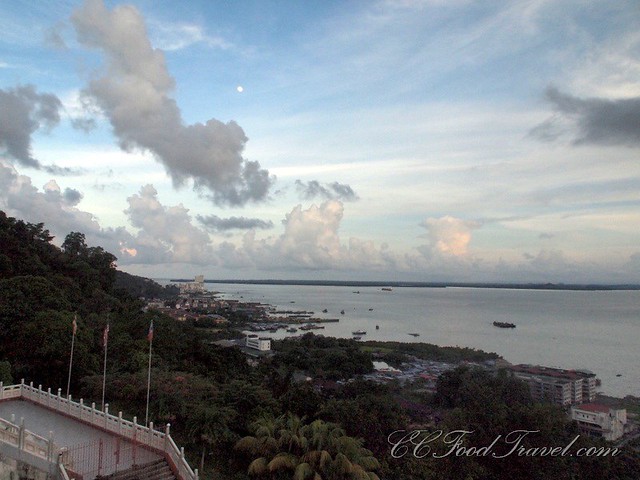 The temple offers magnificent views of the Sulu sea and part of Sandakan. This provides great inspiration for anyone, besides being a place of religious devotion. 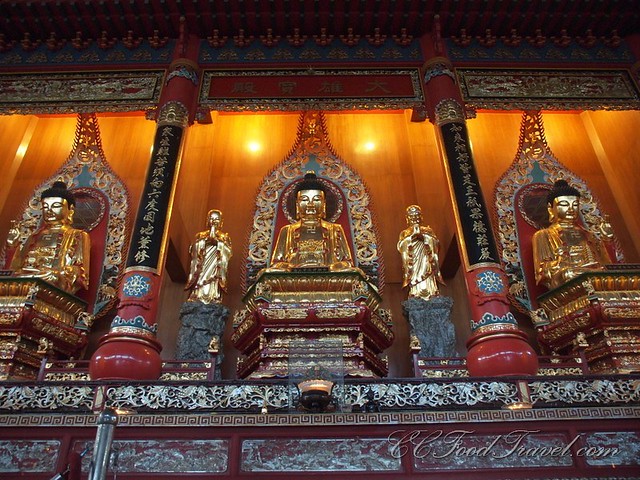 2. Hang out at the Sepilok Orangutan Rehabilitation Center 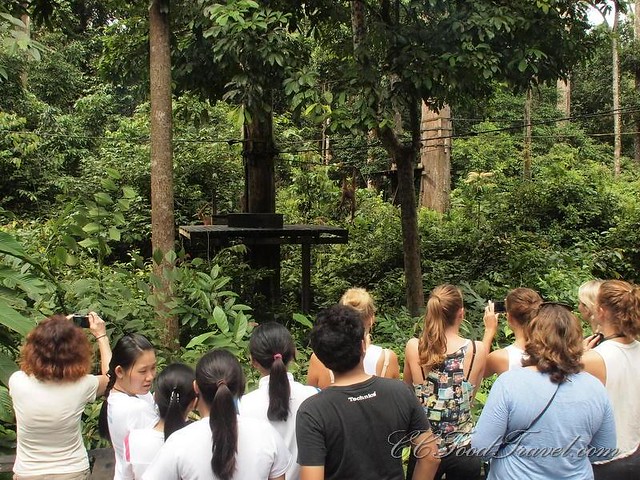 Set up in 1964, this popular Orangutan sanctuary in the Kabili-Sepilok Forest Reserve is administered by the Wildlife Department of Sabah. Visitors can observe the orangutans and macaques antics during feeding times at 10am and 3pm. 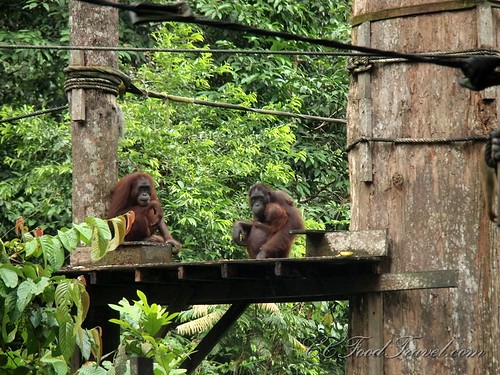 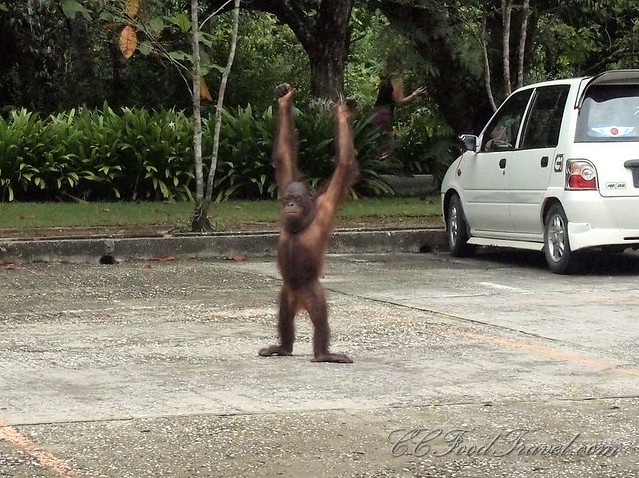 who moved my banana? 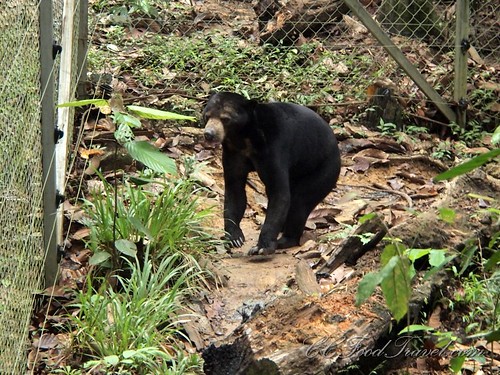 We had a rare opportunity to enter this conservatory, thanks to the fine arrangements by Four Points by Sheraton. Located across the road from Sepilok Orangutan Sanctuary, this hidden gem will only be open to public around the end of the first quarter of 2013. The omnivorous Bornean Sun Bears are the smallest bear species in the world and they are extremely rare, hence the need for conservation. Their common name is derived from the unique golden crescent-like patch found on its chest. The patch itself provides a unique identification for each bear, kind of like a fingerprint. They are are also known as honey bears for their love of honey, dog bears for their size, and in the Malay language, they are known as ‘Beruang Madu’. 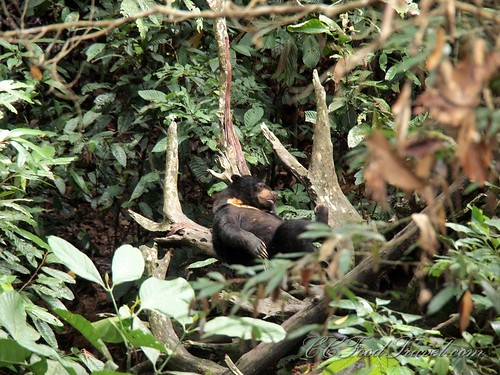 At 560km, the mighty Kinabatangan is the largest and longest river in Sabah, and the second longest in Malaysia. The name originates from a mix of a indigenous names for Chinese (Kina) and River (Batangan) due to the arrival of the Chinese in the area for trade in ancient times. The river and surrounding areas teem with animal and plant life attraction, making this destination one of the best places in Malaysia to visit. 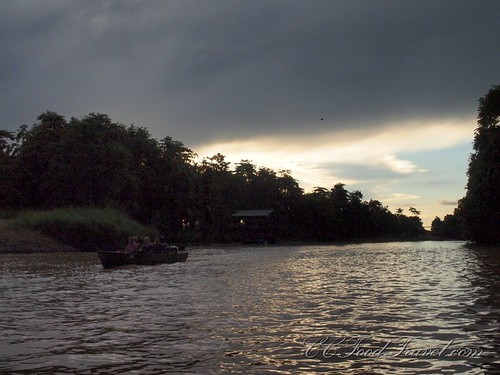 The attractions here are the natural lowland dipterocarp forests, riverside scenery and oxbow lakes which gives opportunity for wildlife spotting on the river, as well as on night walks organized by nature lodges. Due to the high concentration of wildlife, visitors will not leave Kinabatangan without spotting at the very least an indigenous proboscis monkey, orangutan, monitor lizard, long and short tailed macaques, crocodiles, snakes, pygmy elephant, slow loris or even, a western tarsier. 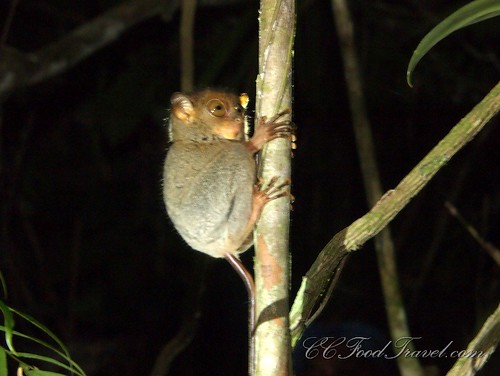 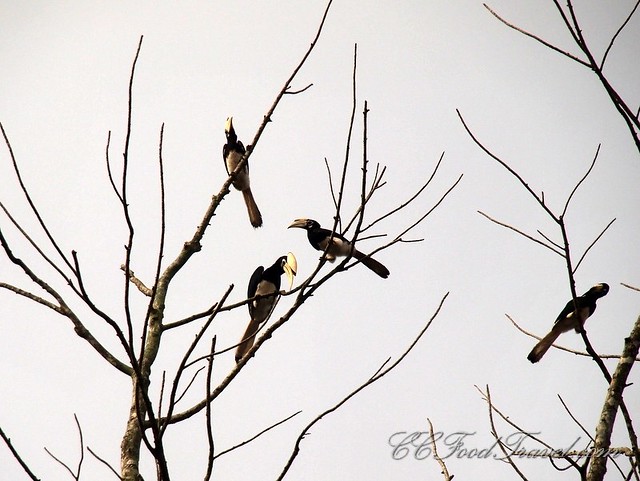 5. Delve deep into the Gomantong Caves

Located in the lower section of the Kinabatangan River, the caves in the Gomantong Hill, are home to many swiftlets who built nests high up in the ceiling of the cave. Abandoned nests located into 2 cave sections, Simud Hitam and Simud Putih, provide a source of income for licensed businesses which collect the nests to sell it to Chinese Medicinal Halls. Visitors get to marvel at the cave structures and the death defying ways which bird’s nest collector use to collect the best nests in the highest sections. In the evenings, a bat exodus provides a grand spectacle as well. 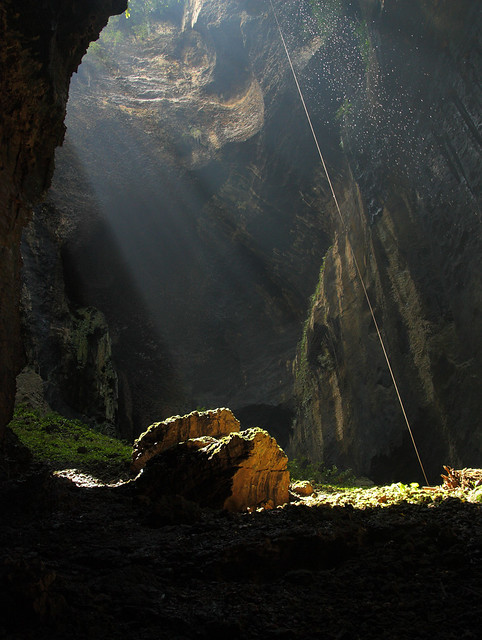 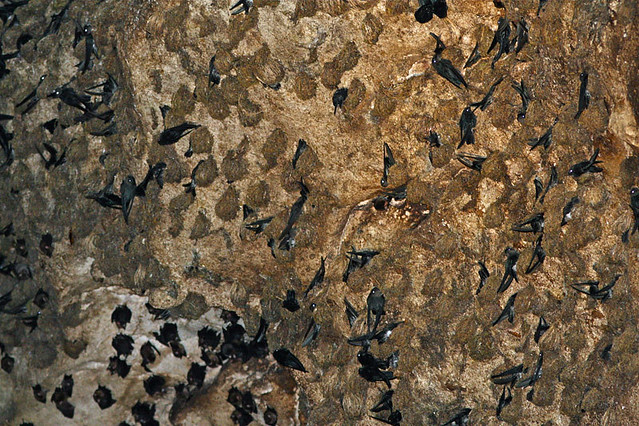 6. Visit the Agnes Keith House and The English Tea House

Situated on top of a hill, this colonial wooden bungalow (officially named Newlands) had been the home of the famous American author Agnes Newton Keith, her husband, Harry Keith and her children before and after the Japanese occupation (1941-1945). Three of her published books, Land Below the Wind (1939), Three Came Home (1946), White Man Returns (1951) chronicled the family’s life in Borneo including the time spent as prisoners of war. Due to the books worldwide success and recognition including a Hollywood film inspired by Three Came Home, Sandakan and the rest of Borneo became known to the world. 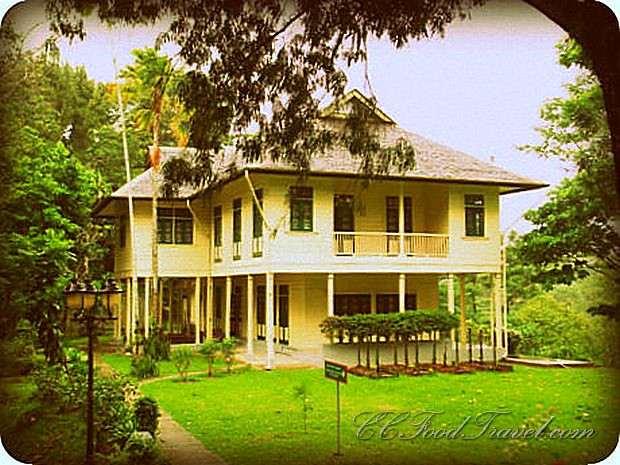 Today, the Newlands house has been restored and turned into a heritage house cum museum, providing interesting insights into life during British North Borneo, Agnes Keith’s life, and also furnished with a reproduction of colonial furniture and antiques. If the antiquity thing is just too much for you, just a skip away is The English Tea House where a wide selection of branded teas (including the Sabah variety) is available for tea lovers, booze for the serial drinker, a respectable menu to keep the tummy filled, a well manicured garden to graze on, and an awe-inspiring view of Sandakan Bay to keep it all together.

Agnes Keith is one of the landmarks for Sandakan Heritage Trail. There at least 10 more heritage locations you may want to visit. Find out more from your hotel or the tourist center when you arrive in Sandakan.

It’s obvious why it is the named UFO which certainly sounds better than its other less attractive names, cow dung or maybe, the pygmy elephant dung. We have been told this little snack with meringue-like top with a custard center on a sponge cake base is endemic to Sandakan bakers. 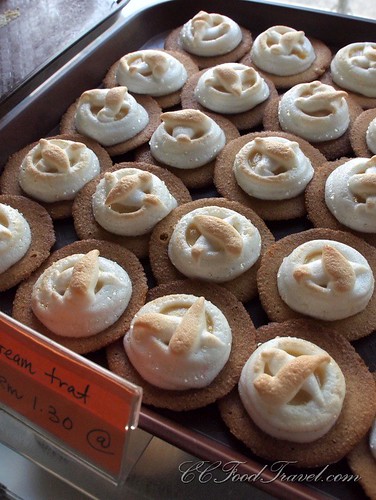 8. Shop at the Sandakan Central Market

A brand new location and building for the old market. Located next to the seafront, this spacious multi storey building houses a dry market where fruits, vegetables and snacks are sold, and a busy fish market. Come early in the morning and you can view fishing boats docking in with their catches to sell. The upper section of the market is a food court which caters to both muslim and non-muslims. 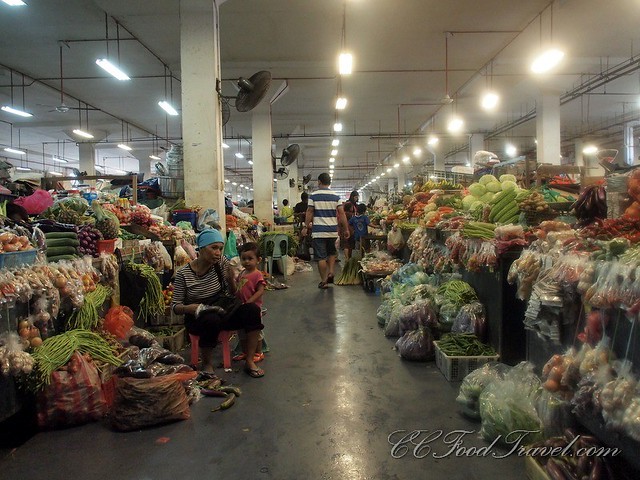 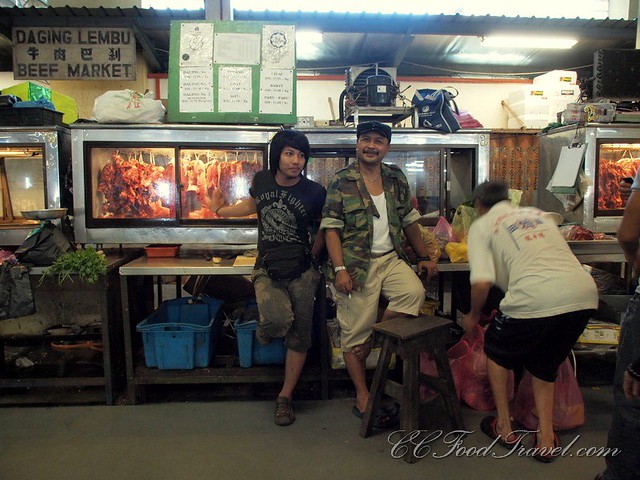 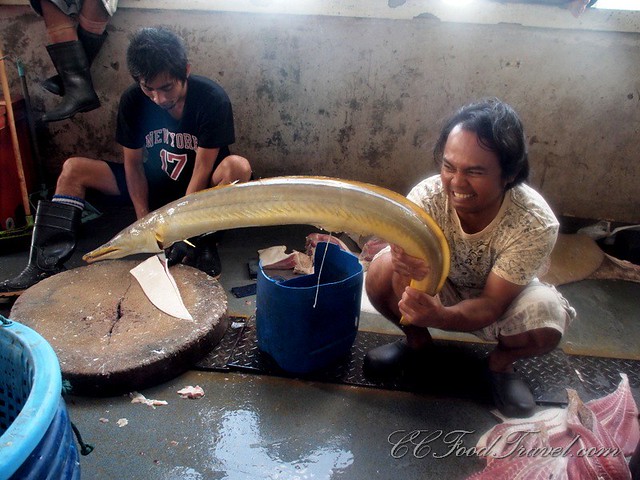 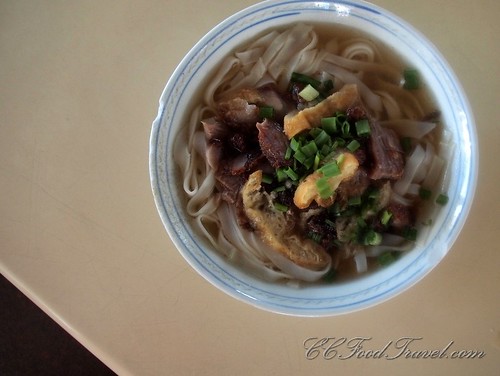 Sandakan is well known for its affordable and tasty seafood due to its abundant fresh supply from the Sulu sea. Finding the best restaurants will take some research, leg work and maybe some taxi rides. Wild boar curry is also found in some of the restaurants on the outskirts. Happy hunting!

The well manicured grounds of the Sandakan War Memorial Park hides the tragedies of the fallen Australian and British Allied prisoners of war who suffered and perished in harsh conditions and treatment from the Japanese occupiers during World War II. Over 2,400 POWs had died. Most of them had died in tragic circumstances in 3 separate death marches towards Ranau town through thick jungle and swamps over 260 kilometers away. 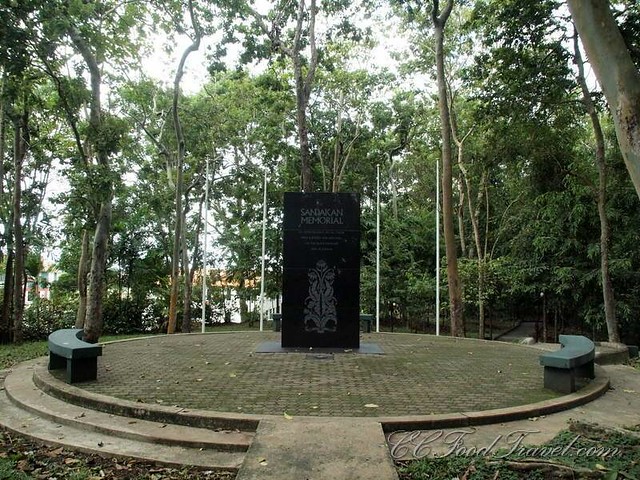 Built on the grounds of the former camp, only a boiler, alternator, excavator and quartermasters store area lay in their original positions to remind visitors of the tragic grounds. An information center provides details on camp, the death marches, and the few escapees that lived to tell their tales. An obelisk of black granite had been built in memory of all the soldiers that perished.

If you follow the Sandakan Heritage Trail, there are several other memorials within the town center that remind of local fallen leaders in World War II.

10. Observe beach landings of the endangered Green and Hawksbill Turtles

Selingan Turtle Island Park offers overnight visitors the opportunity to observe beach landings of the endangered green and hawksbill turtles. Wildlife rangers will collect turtle eggs for conservation purposes, and tag the mother turtle. If visitors are in luck, they will be able to observe the release of baby turtles into the sea. The Turtle Island Park (gazetted 1977) lies 40km north of Sandakan in the Sulu Sea and consists of Selingan, Bakungan Kecil and Gulisan islands. Selingan being the largest, provides the headquarters and the facilities for researchers and visitors. The best time to visit is between July and October when the sea is calmer. There are limited beds so book early! 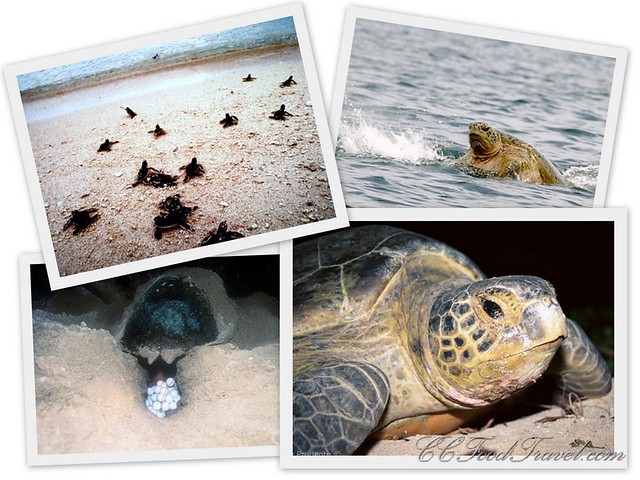 11. Check out the Rainforest Discovery Center 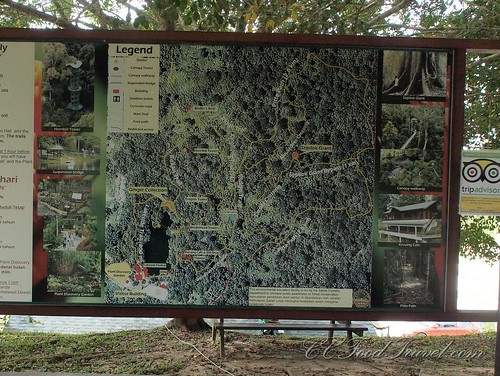 This place is marvelous and one of the highlights when we visited. In one place, the young and old will learn about the plants, trees and flowers of Borneo on beautifully landscaped botanical gardens. In another section, a metal 300m walkway that looks like something from a science fiction movie, brings you up 25m high into the jungle canopy to observe the tall trees, flora, insects and birds. Occasionally, you will spot orangutans and macaques. Night Walks are available, and team-building events can be arranged. 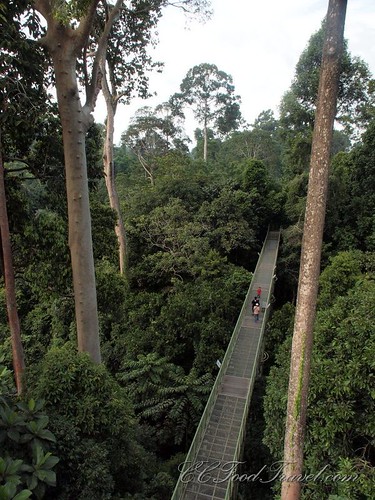 12. Marvel at the St. Michael’s and All Angels Church 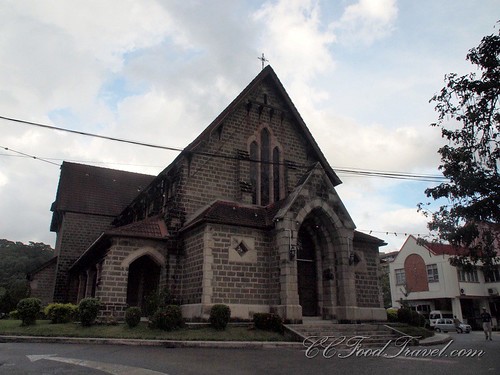 This icon on a hill had been established in 1893 and the construction took 30 years to complete. It managed to survive World War II and today remains one of the most beautiful structures in Sandakan and also one of the holiest. Many visitors come here to marvel at the beautiful stained glass windows on its 4 walls, or spend some quiet time with the Almighty. 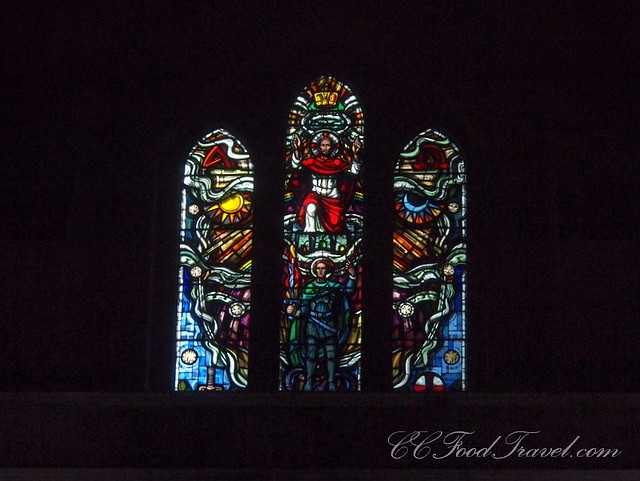 And with that, we conclude our top 12 locations to visit when you are in Sandakan.

There are plenty of other little gems hidden across the Sandakan district. Maybe you can share with us your top favourite places in and around Sandakan!

In September, Mövenpick Hotels sent four bloggers from the iambassador team to various destinations around the world to experience Mövenpick hospitality and to explore…