We are no strangers to the Norwegian Seafood Gala dinner, held as a yearly affair, at the Mandarin Oriental Hotel, KL. 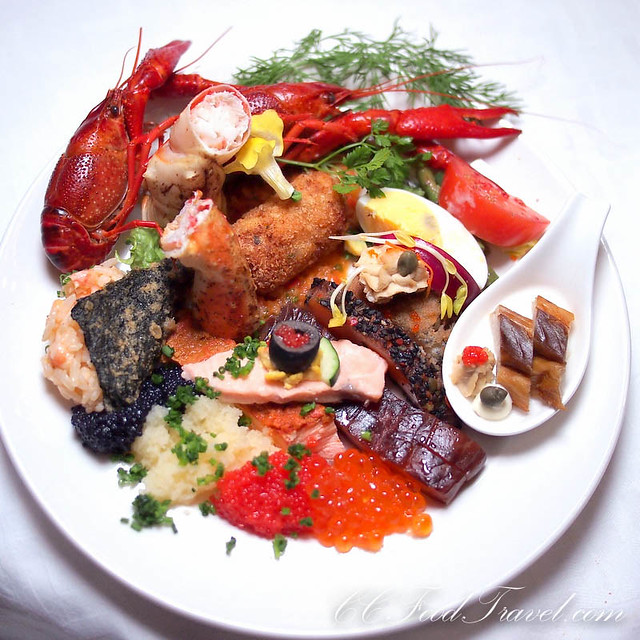 This year itself had a few pleasant surprises. The celebrity chef entourage was one of them. 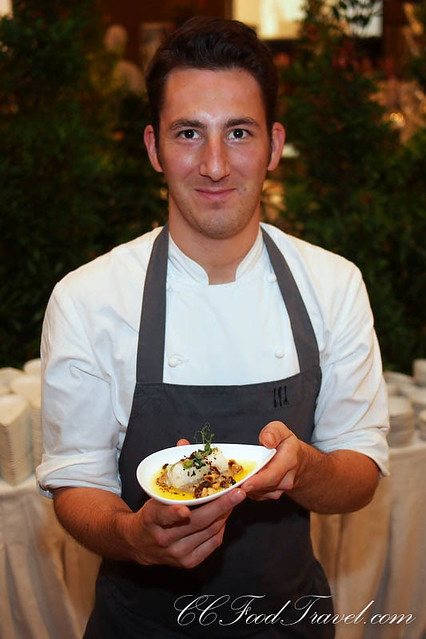 Guest chef Markus Dybwad, from the 3-Michelin star Fat Duck by Heston Blumenthal in England’s live station was where all the action was! 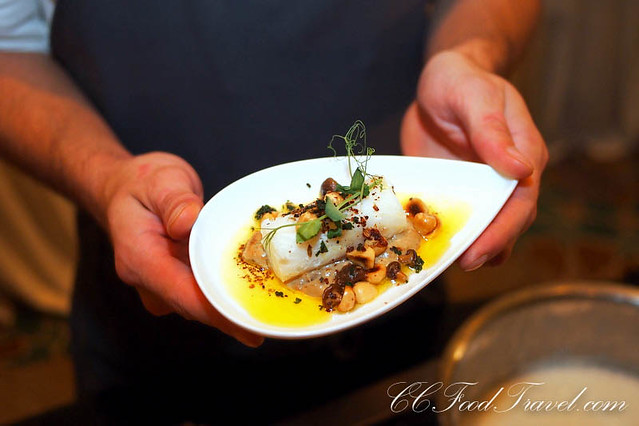 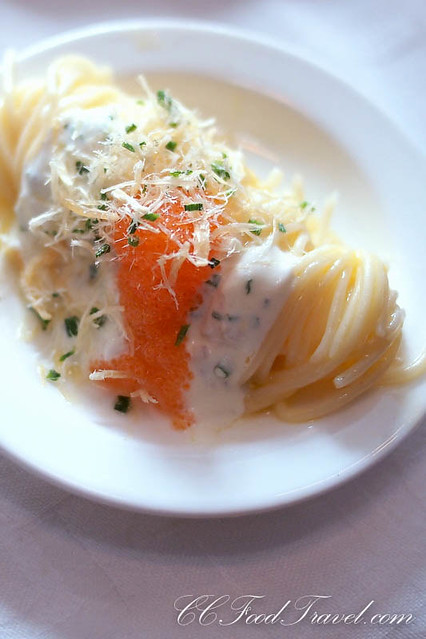 His station also had a Dried Cod, dried Scallop, creamed linguini and bleak roe pasta dish which was to die for! This reminded my of the angel hair pasta dish served at Gunther’s, but it was slightly thicker. The explosions of roe, met the rich creaminess of the sauce and nice savory flecks of dried cod and scallops, that went superbly well with the pasta. 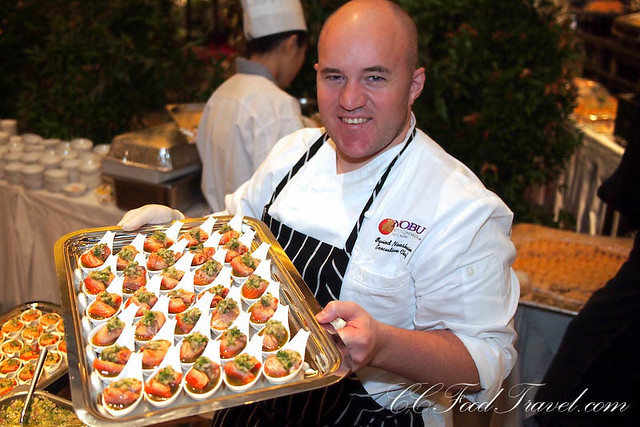 Then I met another famous chef.. who was so down to earth and cool – Chef Oyvind Naesheim, executive chef at Nobu, Intercontinental Hong Kong 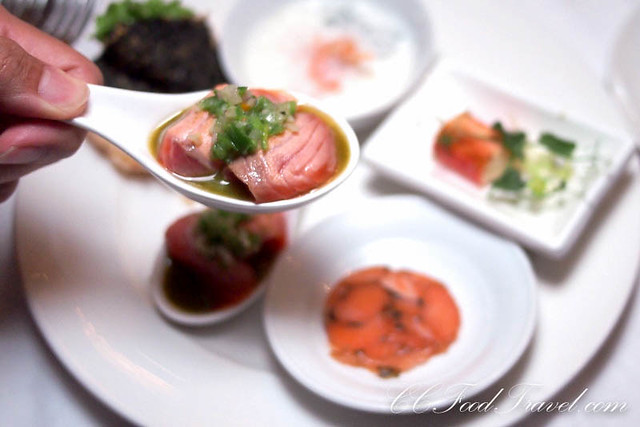 Salmon, salmon on my spoon.. you’ll be in my stomach, very soon! 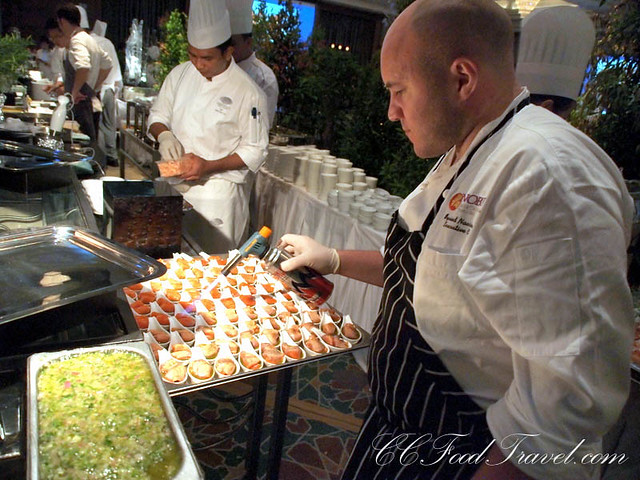 He made the most amazing flame seared salmon dish which was like butter melting on a hot spoon. It literally melted on my tongue in one unctuous mouthful!  The succulent smokiness imparted in each bite, was phenomenal. 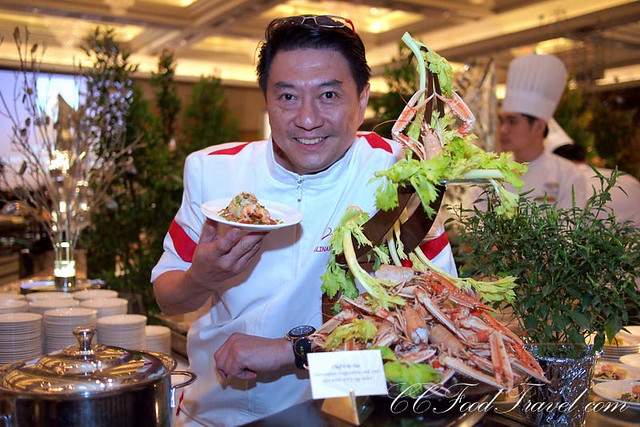 Then it was time to pay the charismatic Chef Eric Teo, from the Mandarin Oriental, Singapore’s station a visit. 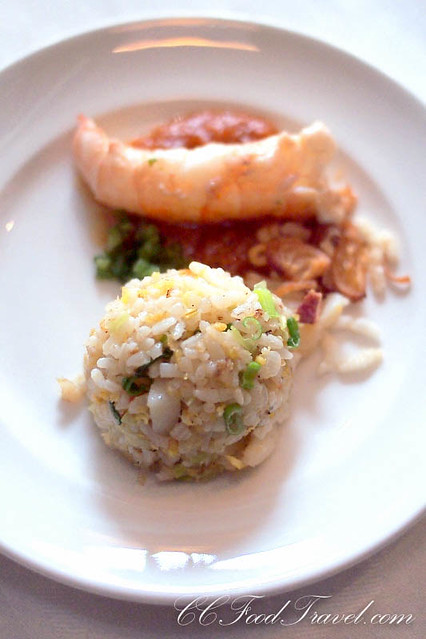 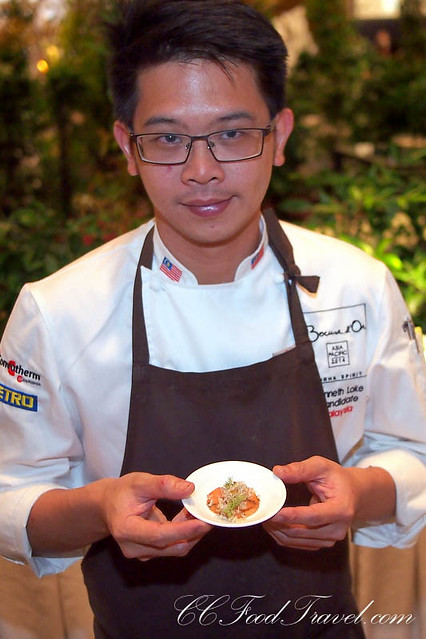 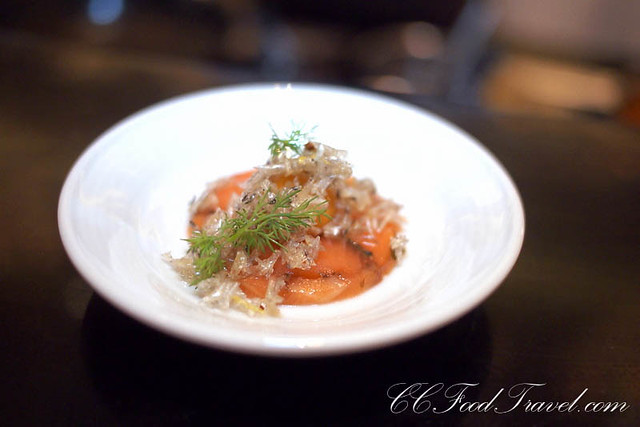 Loved Chef Loke’s salmon carpaccio dish .. one mouthful and it was gone too quickly!

The Norwegian Ambassador to Malaysia, Hans Ola Urstad, gave the opening remarks at the annual Norwegian Seafood Gala Dinner held on Friday October 10 2014 at the Mandarin Oriental Kuala Lumpur. A spectacular seafood buffet that flowed for as far as the eye could see was orchestrated by chef Frank Naesheim and his team of culinary professionals from Norway, Malaysia, Singapore and Hong Kong. 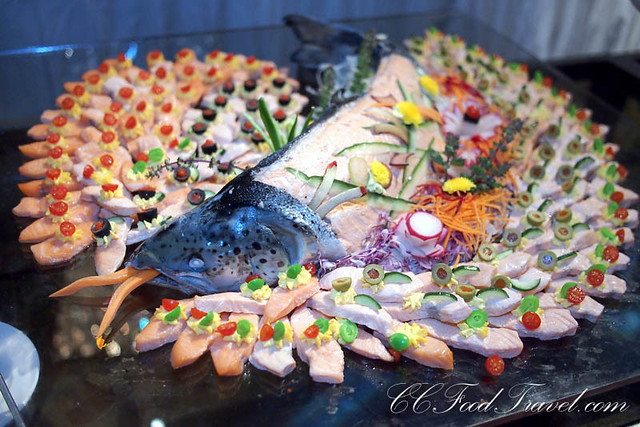 Norwegian Seafood for as far as the eye could see! 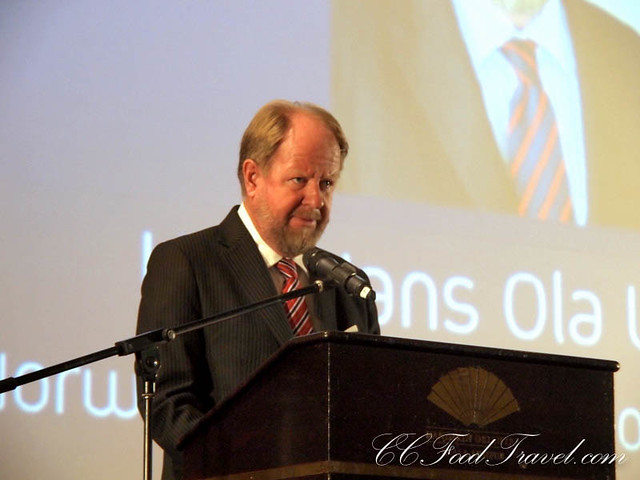 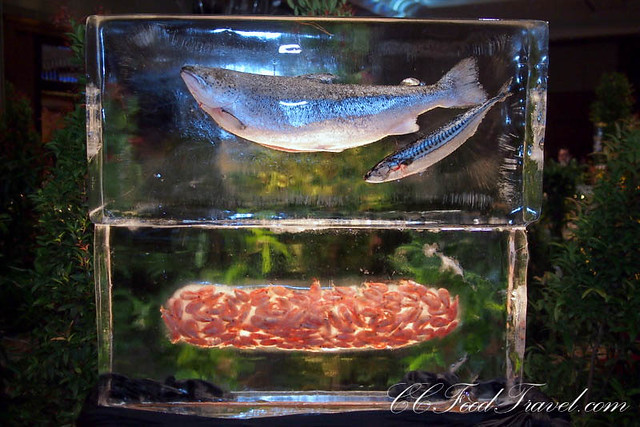 It came in with the Ice Age!  Lucky we didn’t need to wait for dinner to thaw 😛 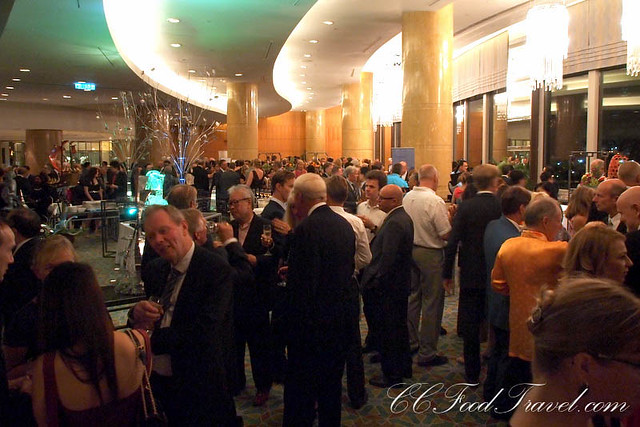 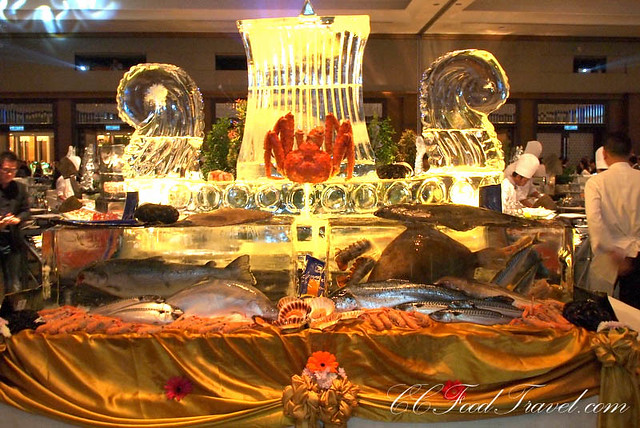 That grand ice sculpture of a Viking’s ship… 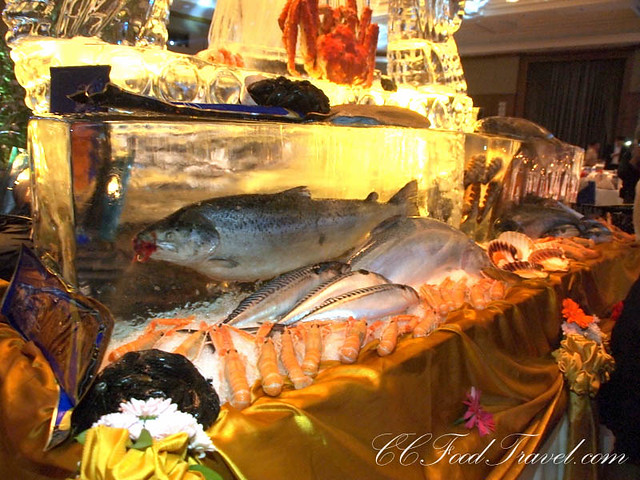 But where were the Vikings.. ? 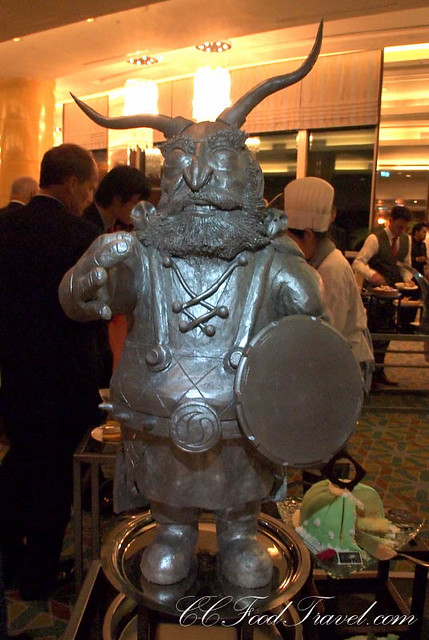 Chef Naesheim’s seafood dinners have become an annual highlight for the Norwegian business community in Malaysia. He was chef de cuisine at the Bagatelle in Oslo when it was awarded a Michelin star, the first restaurant in Norway to be honoured this way. 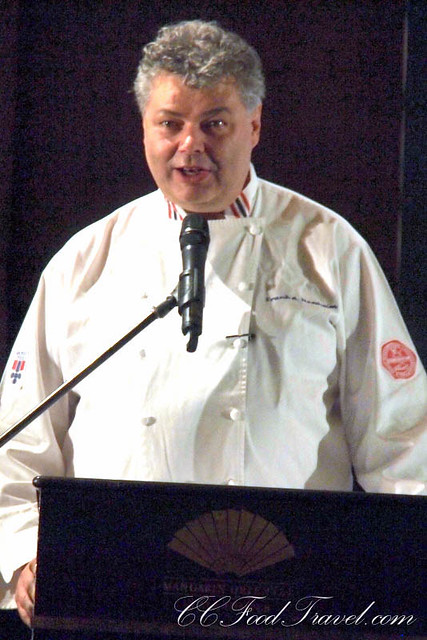 Known as the Salmon King in Asia, Naesheim first came to work as executive chef at the Vikings Restaurant in Singapore in 1987. A few years later he established Snorre Food Pte Ltd, to import quality Norwegian seafood and focus on promoting it in Asia. He launched cooking competitions, highlighting Norwegian salmon, as part of the Salon Culinaire, a high-profiled Asian culinary event in Singapore. 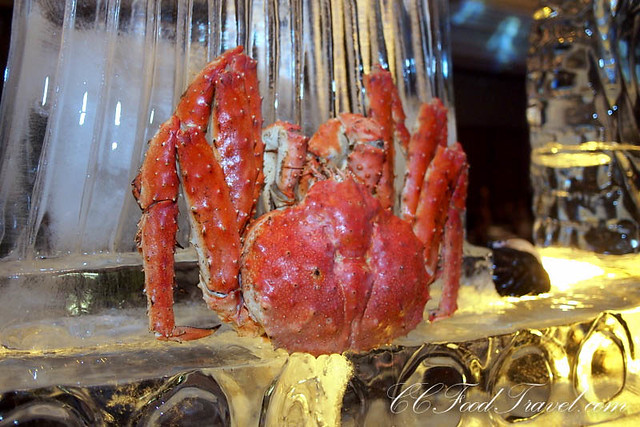 All hail the King Crab! 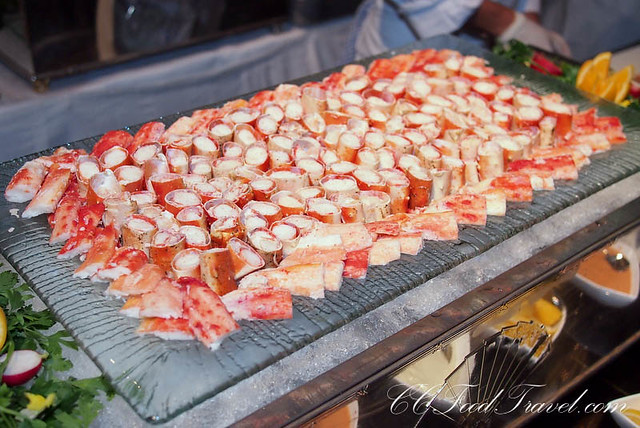 How thoughtful of them to slice up the king crab for the guests!

Naesheim’s Salmon King title is well deserved. He has written a cookbook Norwegian Salmon in Asia, produced recipe booklets for salmon and organised the Salmon Buffet of the Century in Singapore. 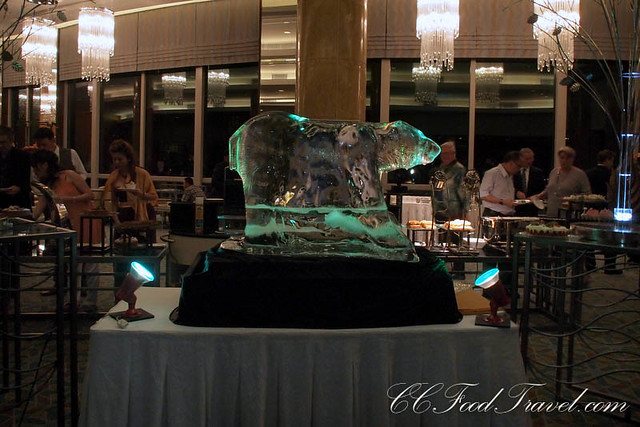 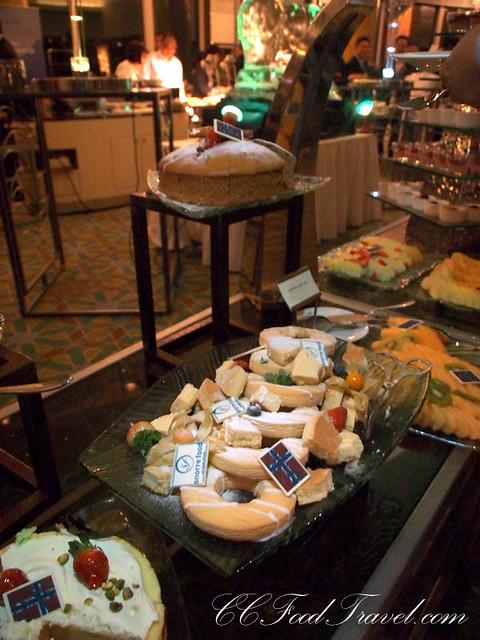 Guests stayed on for her fine singing and entertainment, and also for the massive spread of Norwegian desserts. 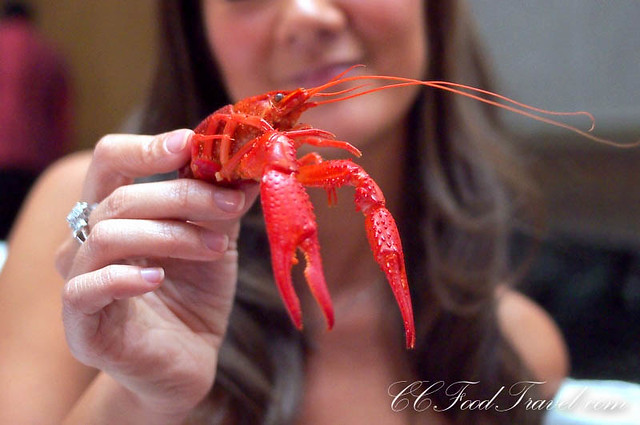 All the seafood was specially flown in from Norway and was presented in both Norwegian and Asian cooking styles. This includes Norwegian salmon in different forms, mackerel, Atlantic halibut, monkfish, scallops, herring, crayfish and king crab, among other varieties. 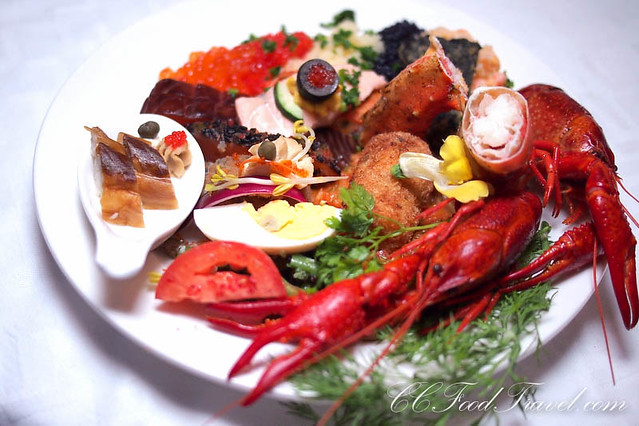 A great night out.. I think I’ve definitely eaten my fill of great Norwegian Seafood and fine cuisine for a year.. at least. Well, as they say.. till the next one!