Malta is a group of seven islands in the Mediterranean Sea. Only the three largest islands – Malta, Gozo and Comino – are inhabited. The terrain is low and rocky with coastal cliffs.

Malta is a melting pot of civilisations with a history stretching back thousands of years. The country has been inhabited since around 5200 BC and a significant prehistoric civilisation existed on the islands prior to the arrival of the Phoenicians who named the main island Malat , meaning safe haven. Later the islands were for centuries the seat of the Order of Knights of the Hospital of St John and then part of the British Empire. Malta became independent in 1964. Malta is also one of those amazing travel destinations that’s totally underrated. There’s loads  to do, and it is a little island, so getting around is not difficult. Here are my tips and my favourite ways, of getting to know Malta.

In reality, there are many ways to see and experience Malta, but here are my favourites.

The top 5 Ways to see Malta include : 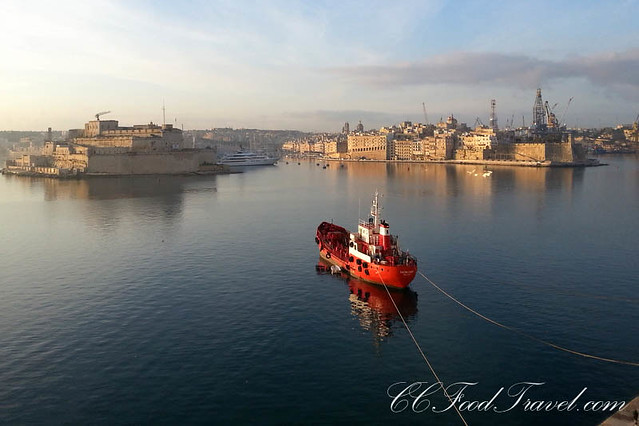 1. Take a Walking Tour in Valletta

The first thing that hits you, is just how much history and character the buildings have. Just spend time wandering the streets of Valletta, if you don’t believe me. But if you want a bit more information about the place, then you should take a walking tour. 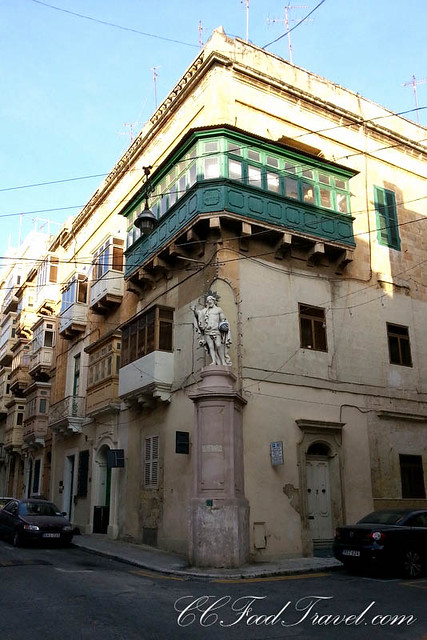 Apparently the hallmarks of affluence in Malta, include, (a) owning big balconies, (b)owning a corner lot, and (c), having an ostentatious pillar mark your corner lot. All this was told to me by Daniel, the manager of the place we were staying at, at the Palazzo Prince D’Orange. 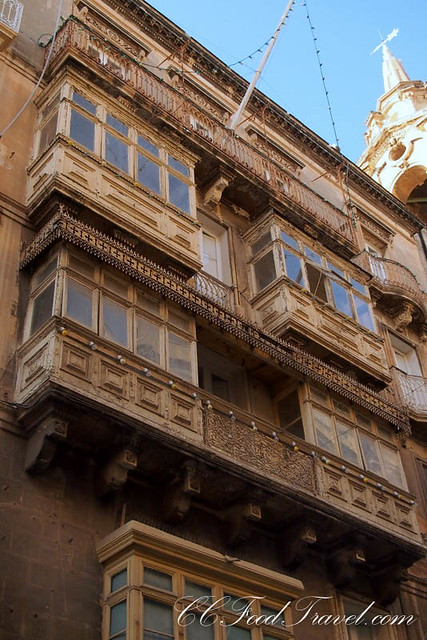 Well there were certainly enough cool balconies to gawk at, while taking a walking tour of Valletta. 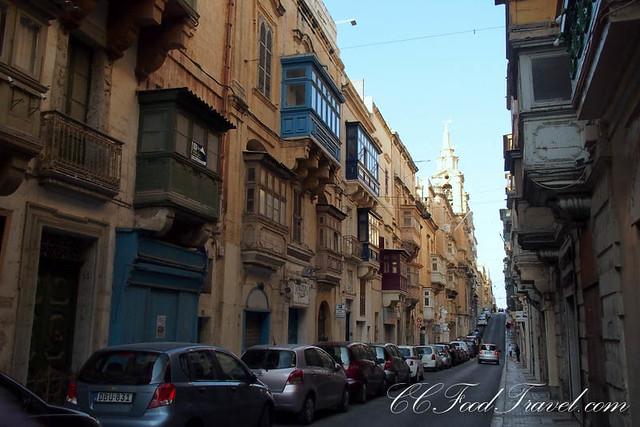 St. John’s Co-Cathedral was our first stop, on this walking tour. 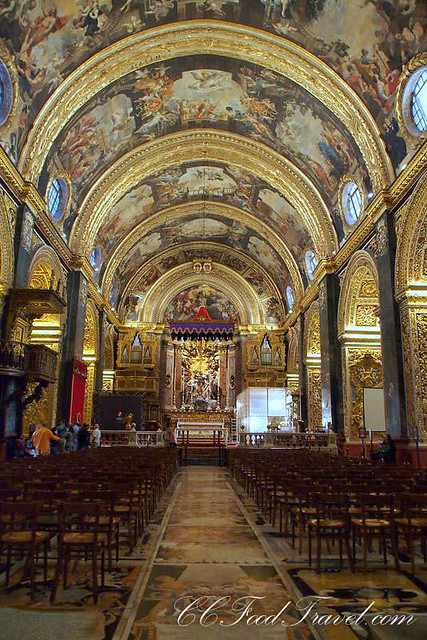 On the south side of Great Siege Square is the famous “St John’s Co-Cathedral. This church was dedicated to St John the Baptist and designed by Gerolamo Cassar, the first architect of the Order of St John. 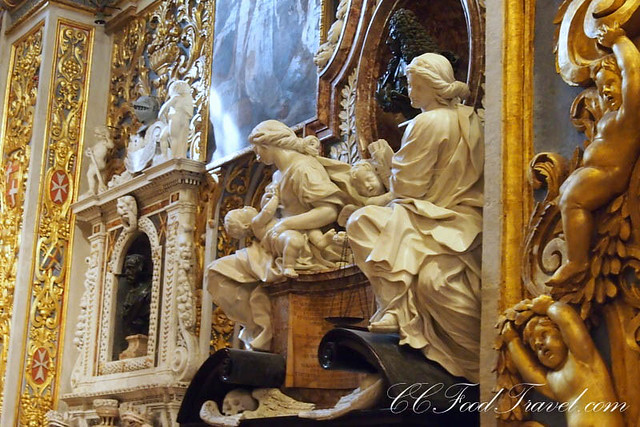 The interior, in sharp contrast with the facade, is extremely ornate  and decorated in the height of the Baroque period. 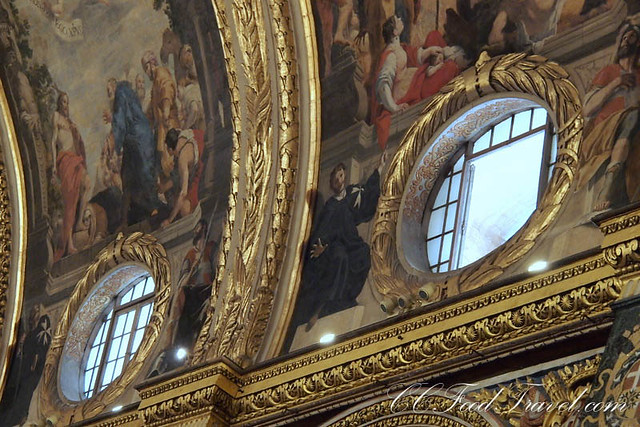 The interior was painted and decorated by Mattia Preti, the Calabrian artist and Knight. Preti designed the intricate carved stone walls and painted the vaulted ceiling and side altars with scenes from the life of St John. If you look closely, the figures painted into the ceiling next to each column appeared to have a life like, 3rd-dimension to them, due to the clever painting of shadows. 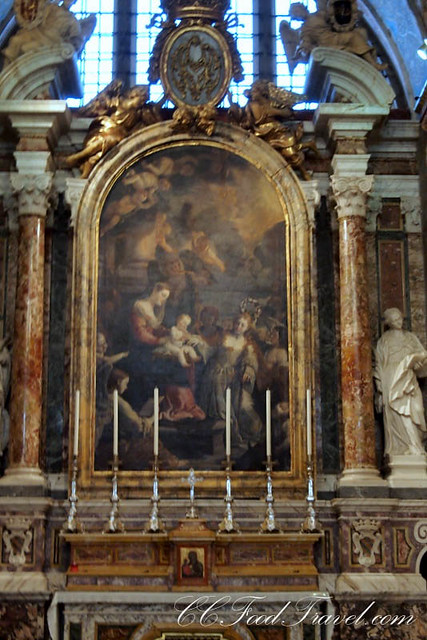 The Cathedral is a bit over the top, and rather gaudy – elaborate artwork on its floors as well as its ceiling, walls and arches all clamor for attention. While being marvelous, it is also a little eerie. The flooring is a magnificent marble mosaic of 405 tombstones  belonging to many 16th to 18th century European nobles and Knights and each depicts the coat of arms and images relevant to each personality’s life.

2. Go for A Sailing Tour 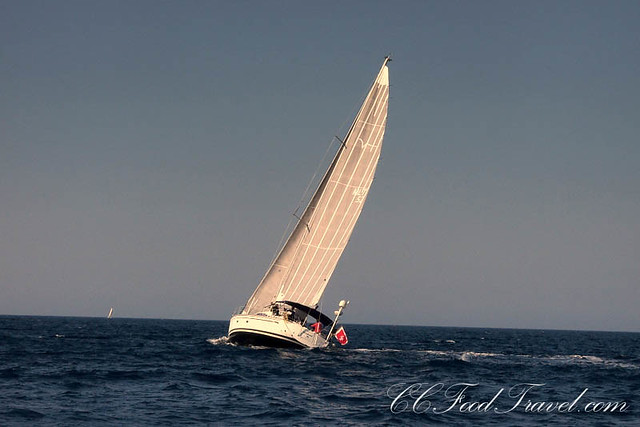 If you have never sailed a boat, or been to sea on a sail boat, the angle of the vessel might alarm you. You will literally sail on your side, at an angle of 45 degrees, should there be a strong gust of wind, that tugs on the sails. 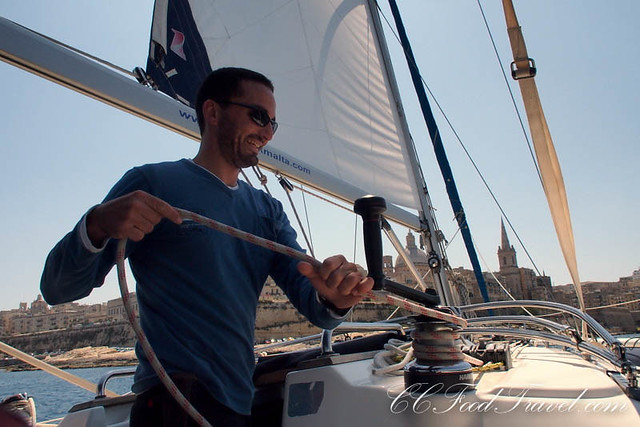 We chartered a sailing Yatch with BoatlinkMalta for a day, to see Malta, from a different perspective. 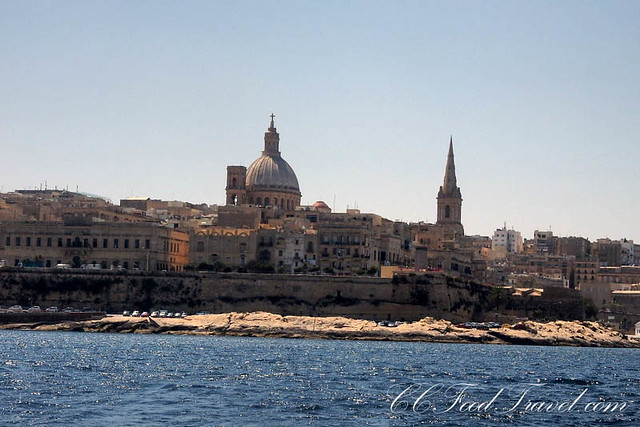 Sailing is a great experience for people who love adventure, the sea and the outdoors and it is a great way to get to know Malta. We got on board the Bonita, a Bavaria 37 and soon we were confronted with coastlines, spectacular with bays, caves and secluded beaches. The sunsets in Malta are amazing from a boat, so evening sails are also recommended. 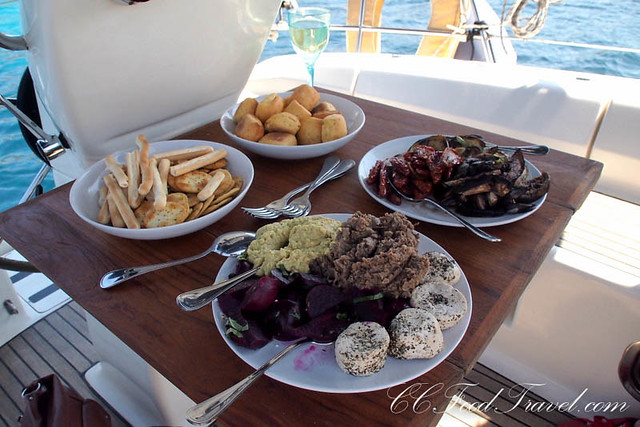 A lovely lunch, of authentic Maltese cuisine, complete with wine, was served to us, once the boat anchored itself in the bay. If the weather is hot, you can even spend the day sunbathing and swimming. It’s all very relaxed and cool. This is by far my favorite way to experience the place from a different angle – from the sea, looking inland. Beautiful landscapes can be experienced this way. 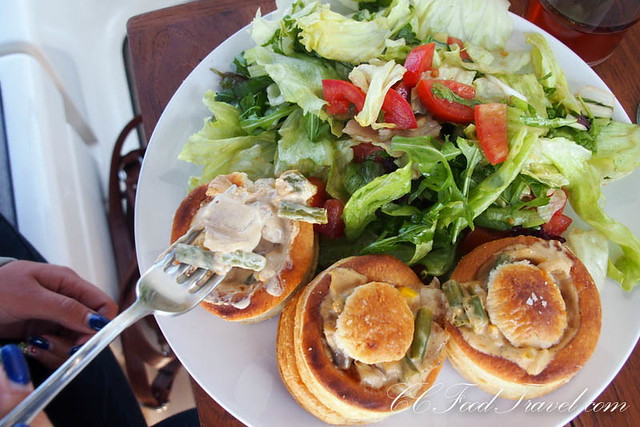 Mezze or tapas was served, followed by mains of either Vegetarian Mushroom pies or Foil Baked Fish

Of course, the added plus point is that they feed you well on this tour. The Chef with BoatlinkMalta was a great cook. A complete 3 course meal with wine and all the trimmings. Totally spot on in terms of flavour and presentation. I was surprised that a sailing tour took so much trouble with their food, but I wasn’t complaining! 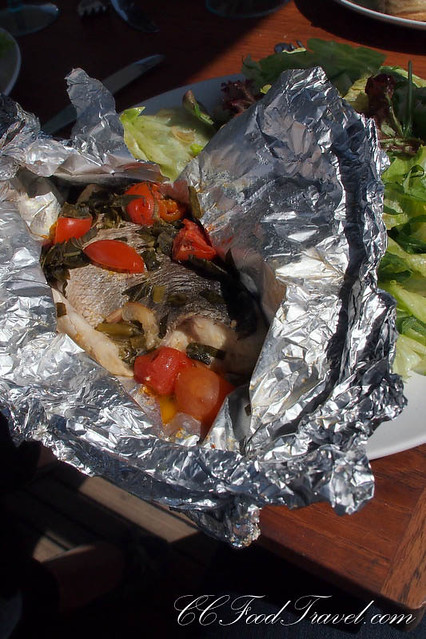 fish baked in tomatoes and herbs

Maltese Cannoli for dessert, served with fresh juicy strawberries was just to die for. 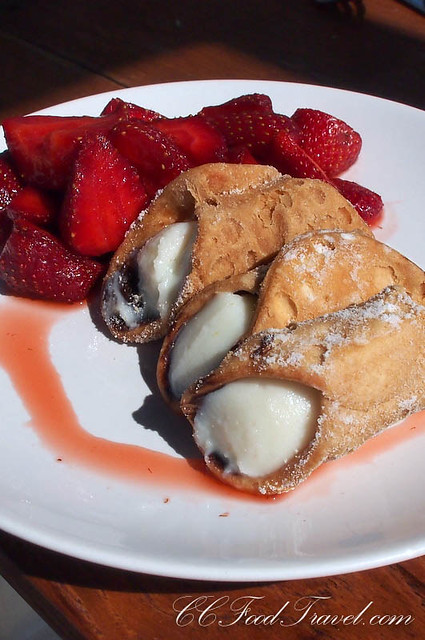 Some terrific sights, from the Bonita… Sailing is really a great way get an overall view of this gorgeous island 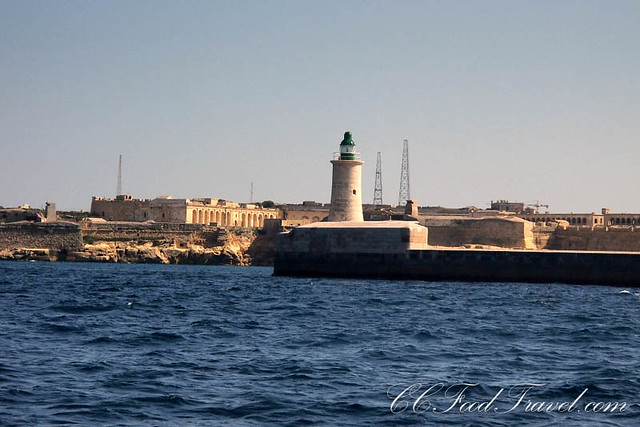 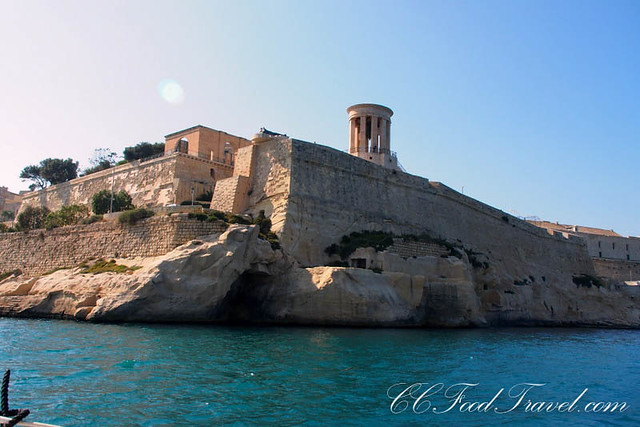 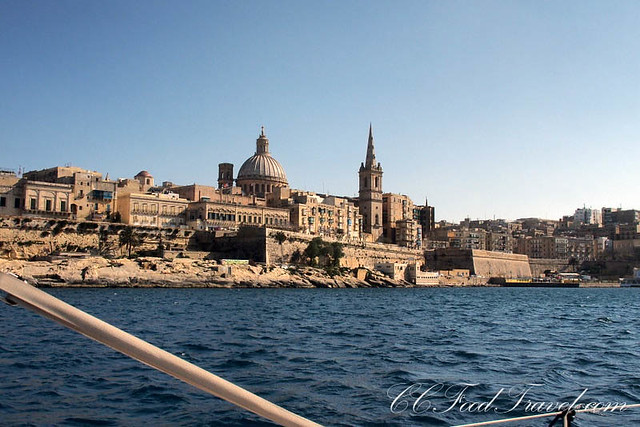 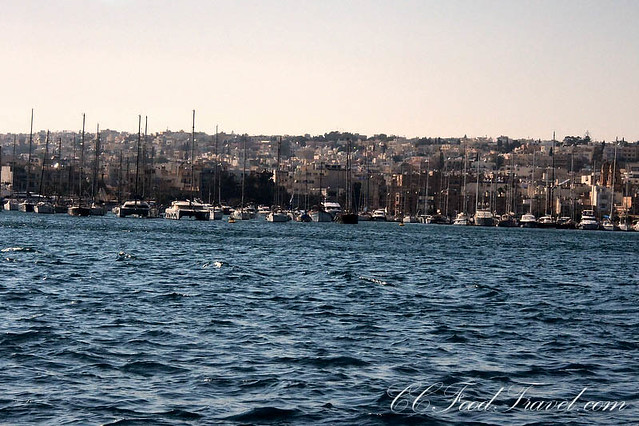 If you’re too lazy to walk or bike, taking a Segways Tour might just be the thing for you.  All you need to do is to stand there and apply pressure with your toes or your heels, and you will move in the direction intended. Easy, isn’t it? 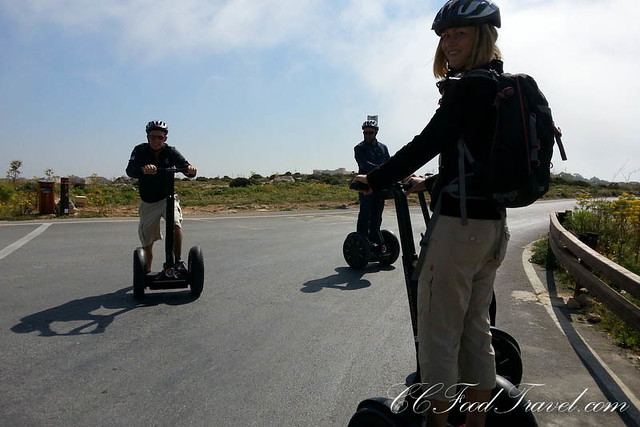 As we started out on our ride, we almost immediately fell in love with the terrain. If not for the erratic weather that swung from hot and sunny, to cloudy and chilly, we would have gotten better photos. No matter, the ride was stil spectacular – we passed the Buskett Gardens, forming one of the few woodland areas in Malta, located in the fertile valley of Wied Il- Luq in Siggiewi. The 30 ha site lies to the west of Siggiewi and just east of Dingli. The Verdala Palace, an official residence of the President of Malta, stands on the edge of the Gardens.

Don’t look down if you are afraid of heights! Otherwise, it is a spectacular sight. Too bad the clouds rolled in, obscuring vision, otherwise this would have been an awesome shot. 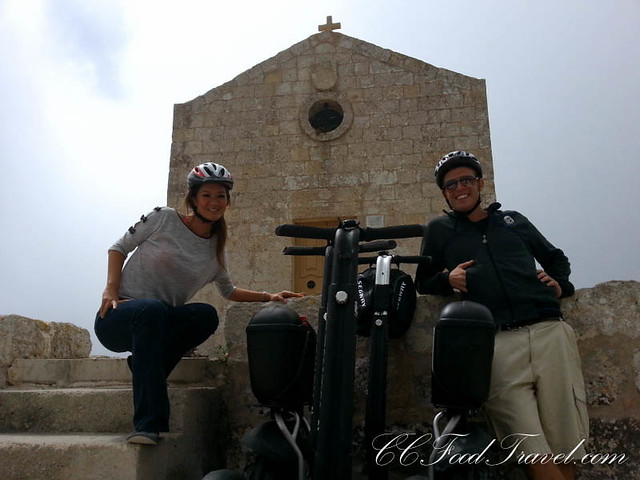 Posing with our segway ride:P

We met a nice man and his van of delectable strawberries, and cactus wine, on the way to Dingli Cliffs. 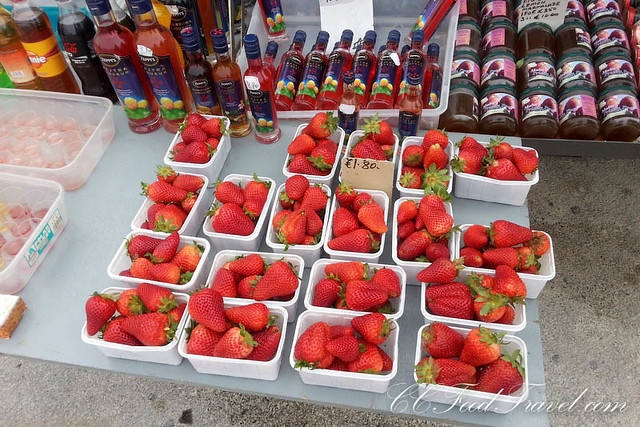 We couldn’t resist buying his massive, strawberries. As it turned out, they were incredibly sweet 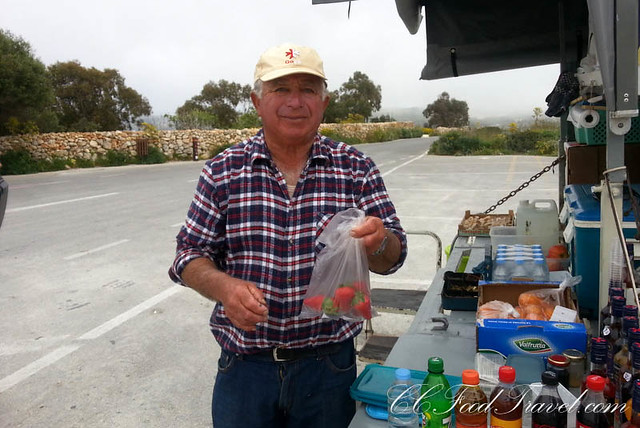 The nice man, gave me a shot of Cactus Wine for free.. 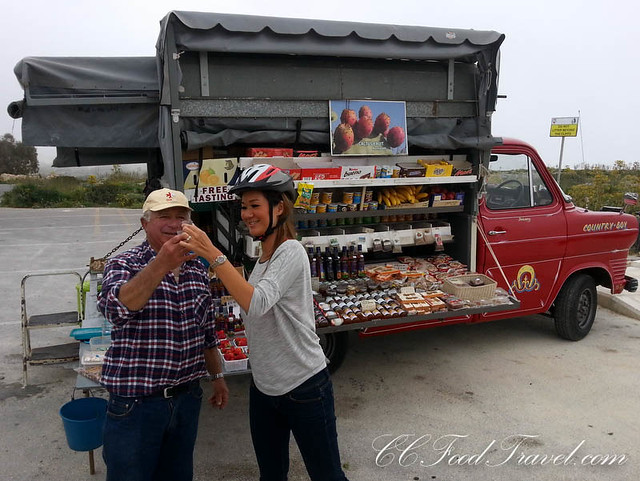 He did mutter, “don’t drink and drive”, before downing a shot with me:P

If you rent a car, you can see most of the important sights in Malta in a day. Since the island is pretty small, it doesn’t take you more than 30 minutes from one main town to the next. (Read post here)

For every health freak and running addict, Valletta is a dream city to run in. It has a lovely path that spans the coastal border and you could easily run round the city in 20 minutes.

The best views in the Mediterranean  during my morning run.. the Grand Harbour as seen from Barbara Bastion

The terrain of Valletta is low and rocky with coastal cliffs. 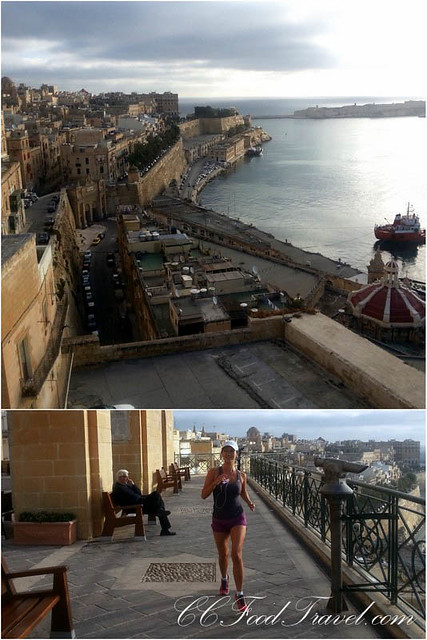 If you want to go further, you can run down to the port (same place we took the Yatching tour from). It is safe and you won’t have any trouble with directions as the grid layout of Valletta is easy to navigate. 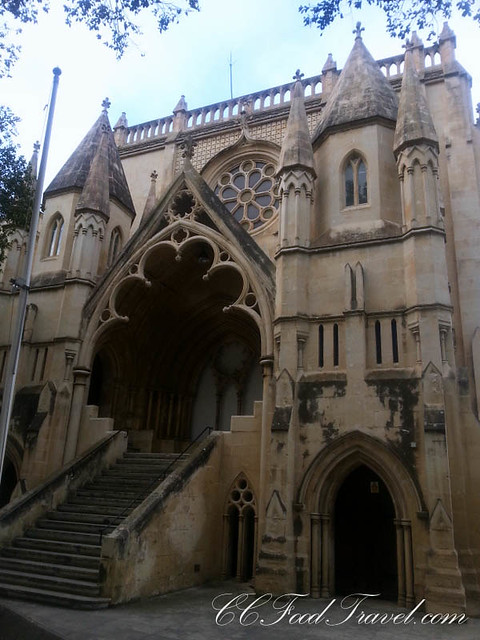 This same grid is what lets fresh air from the two harbours circulate easily in the narrow streets, keeping the city cool. 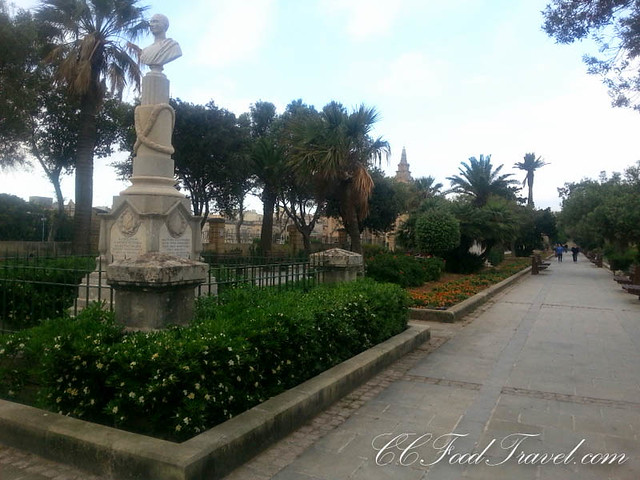 Strong bastions and deep moats are characteristics that you will notice on your run. Back in the day, stairs in some streets in Valletta were made wide, so that they would be big enough to allow knights in heavy armour to climb the steps. 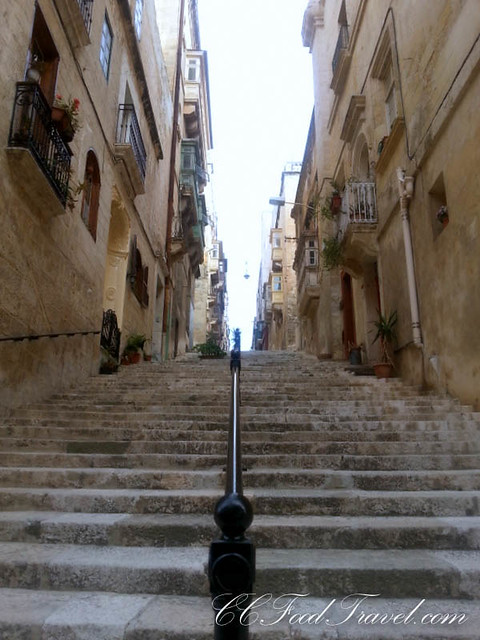 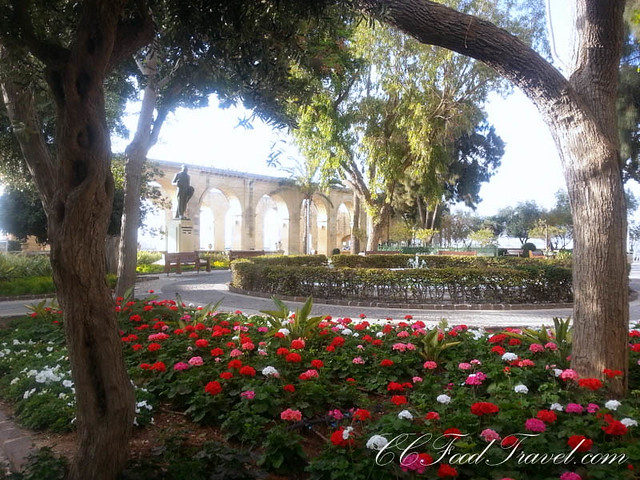 Many quaint bakeries, parks and churches can be discovered if you run around the area, most of which might be missed if you were driving. 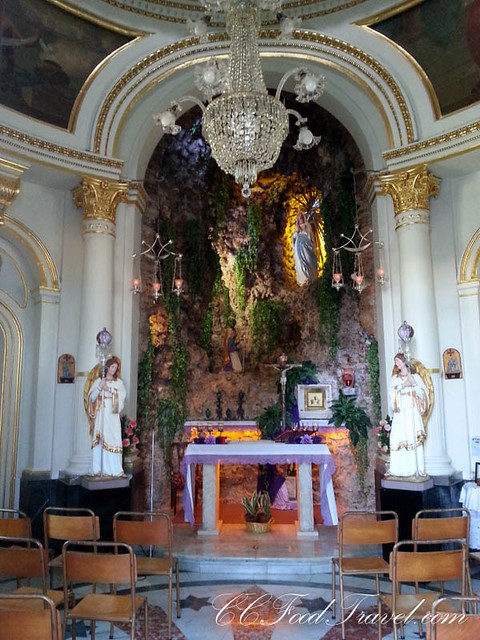 A quick peek into the Madonna ta’ liesse church

One of my favourite churches in Malta. It was tiny, but just so pretty!

This post was brought to you by the Blog Island Malta campaign, created and managed by iambassador in partnership with the Malta Tourism Authority and the support of Air Malta. However, CCFoodTravel maintains full editorial control of the content published on this site.

One upon a time in India, a thousands ‘tiffin-wallahs’ distributed, with amazing accuracy, hundreds upon thousands of lunches to hungry workers, via tiffin carriers….