We recently went balls deep with Mr. Siew from Yang Kee Seapark’s popular beef ball noodle. The somewhat shy owner of the stall had invited us months back to watch him make beef meatballs which he does by hand. It wasn’t until he invited us to observe his artisanal skills that it occurred in our minds that we did not know how meatballs were actually made. In this modern-day of fast food and mass consumption, we could only imagine flavorful meatballs were made by machines in a factory somewhere in an industrial area with the barest minimum food safety standards, and that, they were made by some third-party.

As such, we thought it a great idea to document Mr.Siew making his meatballs, in a video! We informed him we would tell him our preferred date soon, but that ‘soon’ had been months later, as we were swamped with deadlines. Much later, the idea crossed our minds again, after a lunch visit. A short & fun video at the end of the post will show you just how efficiently Mr. Siew churns out em meatballs… 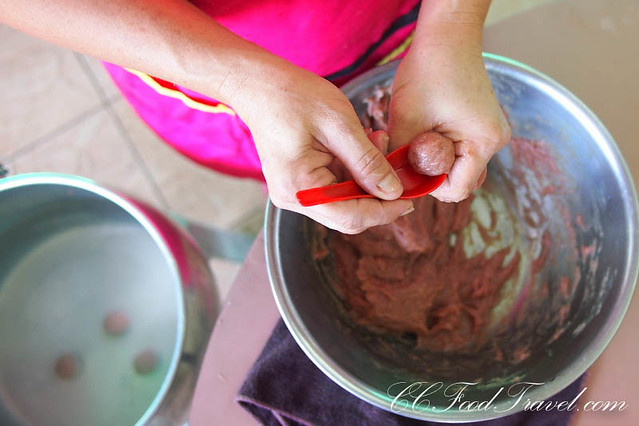 Normally, the meatballs are made at home in the evenings, on a daily basis. Today, Mr. Siew brought out his ‘meat machine’ which was the marinated mince, a large stainless steel bowl, a small melamine plastic soup spoon, and a bucket of water. So begins our short tale on how the bouncy, tasty beef meatballs are made by hand.

Mr. Siew explained his beef balls are free from added monosodium glutamate (MSG). Made only with minced beef, sesame oil, potato starch and some secret spices. The beef balls are beefy good.

The mince meat is kept below room temperature for easy handling.

The water is warm to ensure the meatballs kept separate. 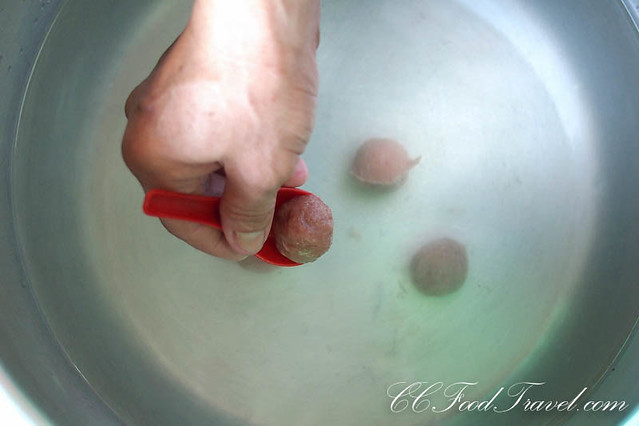 A  clump of marinated mince is held then squeezed through gap of the index finger and scooped into a ball by a plastic spoon. Within 10 minutes he has dropped 70 spherical balls into the bucket, and that’s going at slow speed just for us to capture it!

Siew shares that he makes about 400 balls a day on weekdays, and doubles the quantity on weekends. 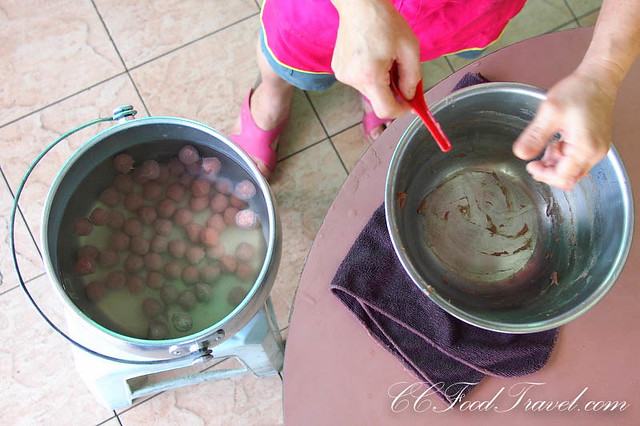 we counted 72 meatballs! how many did you count?

So when you do dine at Mr. Siew’s stall, you now know that you are eating food that’s cooked from the heart, not machine mass produced, and learnt through years of training.

Daikanyama.. ordinary food, made in an extraordinary way.. We like the extraordinary! Next Stop Daikanyama! It’s time to escape the confines of city life….