A continuation post from last years returning trip from Penang.

While having brunch at an Indian Muslim coffeeshop in Teluk Bahang on Penang Island, a chinese lady with her family suggested I try Bukit Mertajam’s famous laoshu fen (silver needle rice noodle) pork noodles when I headed back to Kuala Lumpur. I have never been to Bukit Mertajam. It would be such a wasted opportunity if I didn’t visit and experience this little town, even for a shortwhile, on my return back to KL.

I alighted the ferry at Butterworth in Seberang Prai which is the mainland portion of the Penang State. Seberang Prai had also been known as Province Wellesley in colonial times. I prefer the older name, honestly. I can never understand the government’s agenda on replacing old colonial names of towns and roads to Malaysian names. Is it really for patriotism and national identity, or political and ethnic hegemony?

Bukit Mertajam, the main economic hub and capital of Seberang Prai, is about 20 km away from Butterworth. 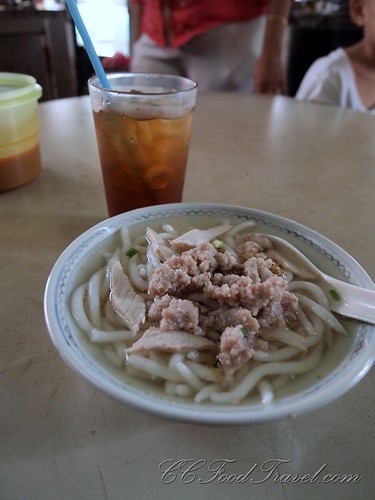 The lao shu fen (directly translated as rat tail noodles) stall is located next to the ancient Tua Pek Kong Temple in the town center. The noodles did not resemble the short rat tail shapes synonymous with the title laoshu fen (mandarin). The noodles here were long cylindrical strands, looking more like lai fen except it was made only with rice flour and not mixed with tapioca flour. The latter ingredient would make the noodles more chewy. The texture of the noodles here were more coarse and gritty than the mass produced short version. I suspect the noodles had been made with freshly ground rice flour without preservatives.  Taste wise, the dish was rather insipid for a diner spoilt by Kuala Lumpur’s stronger flavors (or overuse of salt). I was glad, however, to be able to savour a popular dish here during mid-afternoon, when most eateries would have closed. 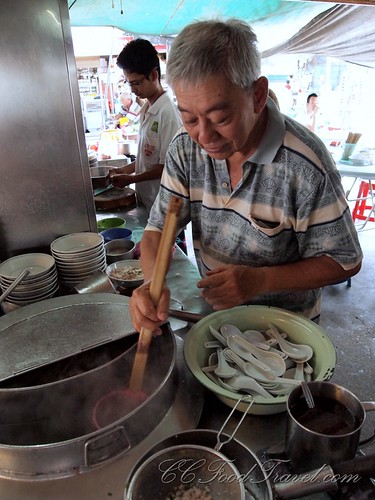 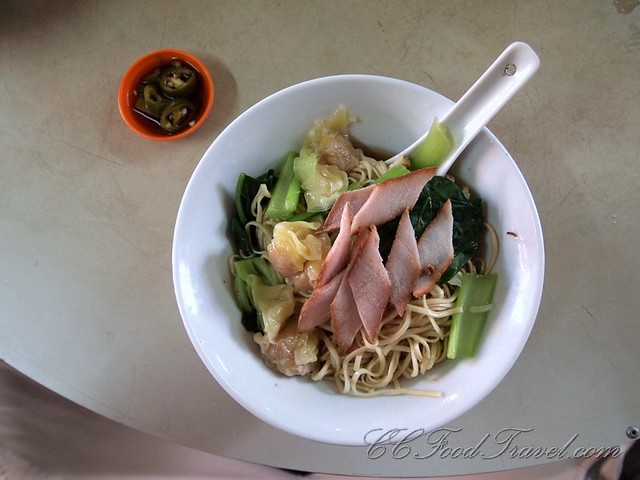 With some gut space left, I ordered the wantan egg noodle dish with slices of barbeque pork from the same stall. It suffered the same opinion as the silver needle noodles – very bland tasting. I would probably need to ‘detox’ my tongue a few days prior to visiting this place again.

Bukit Mertajam town is not a very pretty town. It’s a practical town for trade. Big enough to be noticed and small enough for you to walk around within 1 hour. Tua Pek Kong Temple is the center point of the town and all retail shops are built around this temple including the makeshift wet and dry market stalls. I had already missed the din of the morning markets which would  have been a good occasion to wander, observe and chat with the locals. Instead, I roamed the streets for an hour, browsing the newer shops and the town’s architecture. It was also a small attempt to burn off the calories consumed. 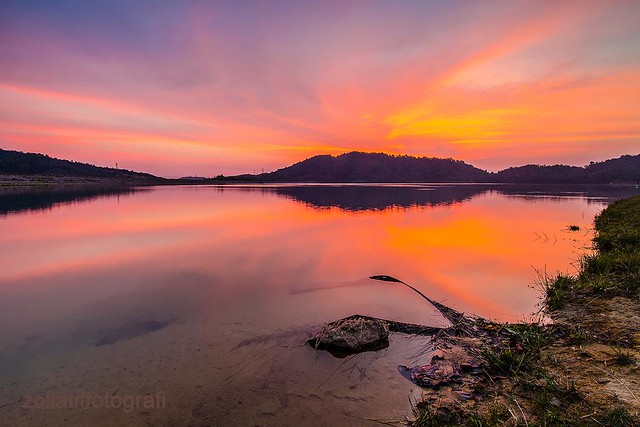 Given more time, I would have liked to hike the trails at the Bukit Mertajam Recreational Park and view the Mengkuang Dam where you can see Penang’s largest man-made lake.

I recently read about the Cherok Tokun granite relic with several Pali inscriptions linked to  a 5th century Hindu kingdom called Kadaaram. The relic, heavily adorned with horrid graffiti, is located within St Anne’s Church compound, so a visitor can visit two cultural and religious attractions at the same time. This turned out to be, yet another missed opportunity for me. 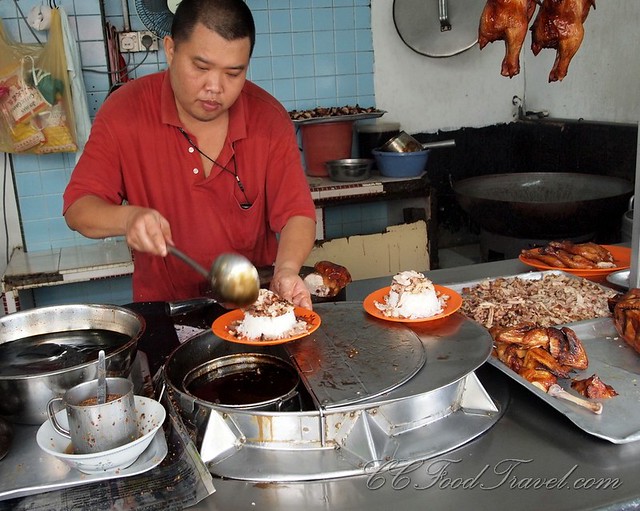 Another famous dish in Bukit Mertajam is the shredded roast chicken rice topped with a special gravy. With hardly any stomach space left, I didn’t manage to sample this dish. It looked flavorsome and I will have to try it on another visit. Maybe some of you can share on the quality of this dish. Good.. or no good? 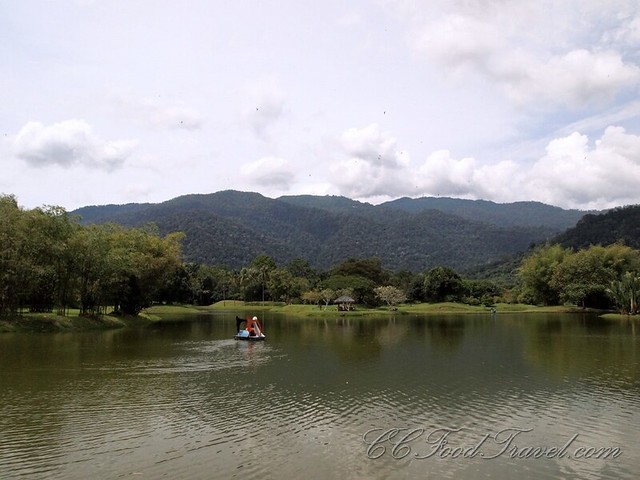 An hours drive away from Bukit Mertajam is Taiping where my next stopover would be. This smallish town is famous for its lake with sprawling greens, and verdant old, lush leafy Angsana trees, the cooling Maxwell Hill (Bukit Larut, 1036m asl), the Burmese pool, a zoo, a war cemetery, several waterfalls, and obviously, its small town food. 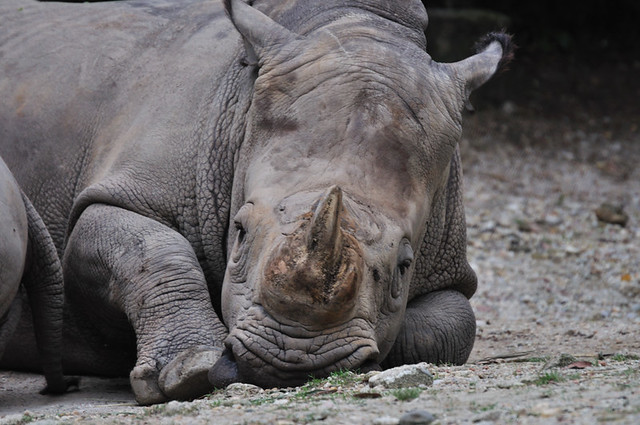 It’s much easier to see a Sumatran Rhino in the zoo than in the wild. Image: BK’s eyes 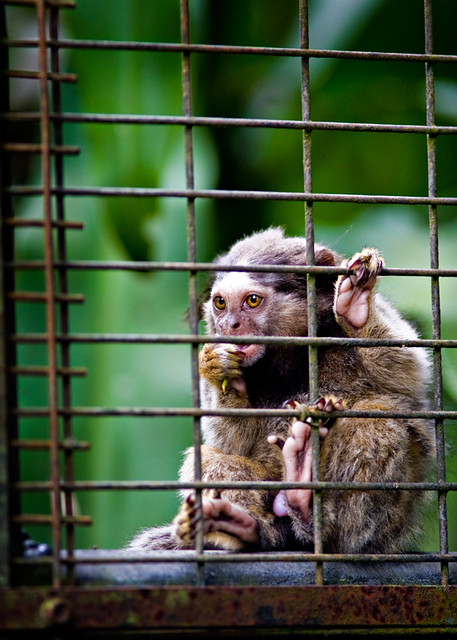 Would have loved to see the Pygmy Marmoset. Image: Nicholas Leong

Taiping Zoo is known to be the best managed zoo in Malaysia and it even has a night safari. Being in Taiping for a business meeting, there wasn’t enough time to foot around in the zoo or any of the natural attractions other than a drive through the lake gardens. 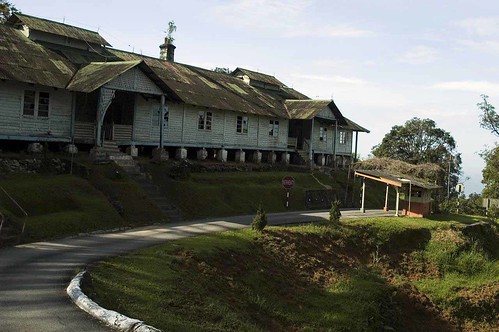 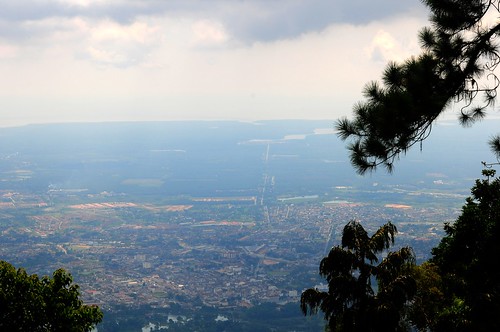 The last time I was up Maxwell Hill (now Bukit Larut) had been over 8 years ago. Out on a stroll alone, I was fortunate to meet a full sized wild mountain goat, approximately 10m from where I stood. Other than the few private run lodges which are in very good condition, the government maintained ones were in horrific condition. Things might have changed today. At 1036m above sea level, the climate is cooling. It is worth an overnight stay. You can take the land rover up or hike. I would choose the latter. 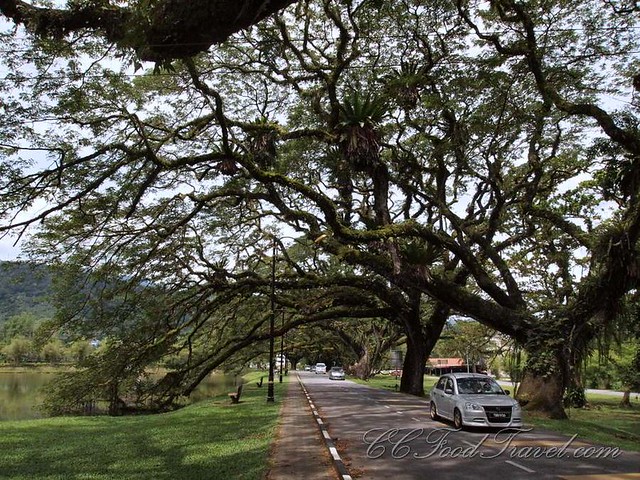 While Taiping is a beautiful town, it is a very congested town during the day and especially the weekend. The town is shaped in a matrix. With numerous traffic lights on each block in town, it is better to park and walk to your destination. You reduce carbon emissions, save some petrol, get some exercise and will probably see more. Remember to buy a parking card, though. The municipal officers are diligent in issuing parking violations as I found out first hand. 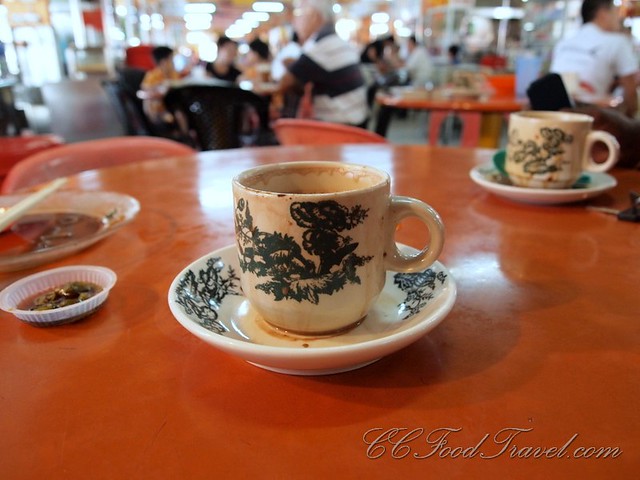 Larut Matang Food Court will probably be the main stop for meals for any visitor coming to Taiping. Located in the center of town (Jalan Panggung Wayang), the retail center cum wet market and food hall has numerous halal and non-halal stalls offering a variety of Malay, Indian, Chinese and Western style food for breakfast and lunch, at affordable prices (RM3 onwards). Famous amongst the stalls are the fried radish cakes (chai tou kueh), oyster pancakes, wantan noodles, and the Taiping Char Koay Teow which has the unusual ingredients of fishball and lean barbecue pork slices. There are plenty of stalls to choose from and everyone has their favourites. I was advised by a local that stall number 78 is famous for its char koay teow. With Bukit Mertajam’s popular dishes still in my gut, I could only manage a cup of local coffee. 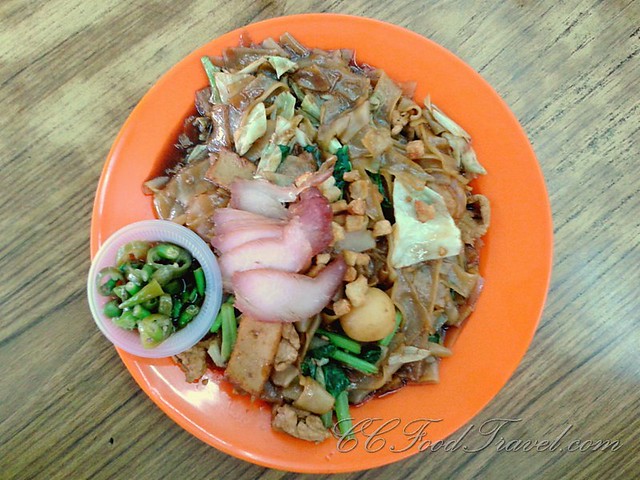 Oddly, my first time taste of the Taiping style char kuey teow was not in Taiping, but at a defuncted noodle stall at the New Seaview Coffeeshop in Petaling Jaya. It was pretty tasty but I never got around to posting it. Few people knew of its existence and now, nevermore. 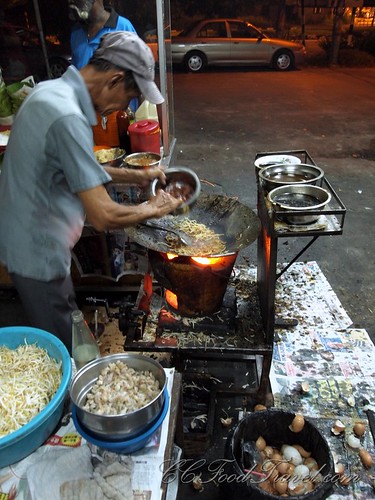 When night falls in Taiping, you can venture out to the main road of Simpang town for a very smoky char koay teow dish. I found it by accident on the way out of Taiping, drawn to it by the smoke bellowing out to the highway. 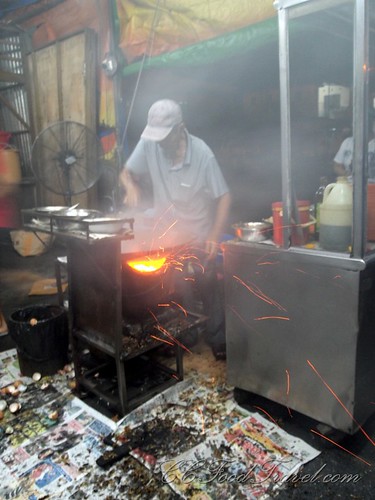 The fried noodles here are not only smoky in taste, but you will be engulfed by the smoke from the  charcoaled high heat from the stove. Yes, you will walk out smelling of smoke and cooking oil. Located in a shack beside Jalan Taiping-Kuala Sepetang in Simpang town, it is next to the Sin Wai Huat Mini Market, the old man here fries in small batches so be prepared to wait a while. You may need to remind him of your order as well. 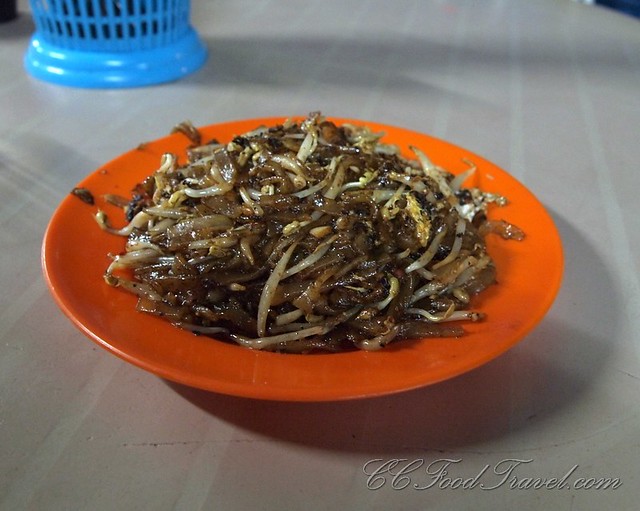 Simpang Char Kuey Teow served plain with the option of duck eggs, and without the fishballs and barbecue meat 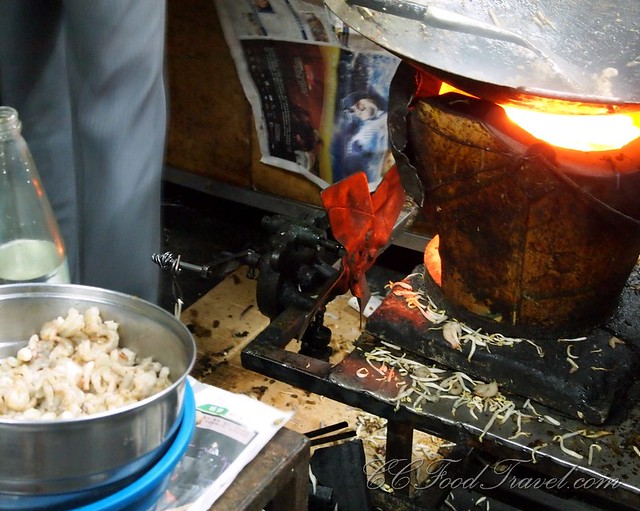 A hand cranked fan to increase the charcoal heat. More convenient than a hand-held fan. 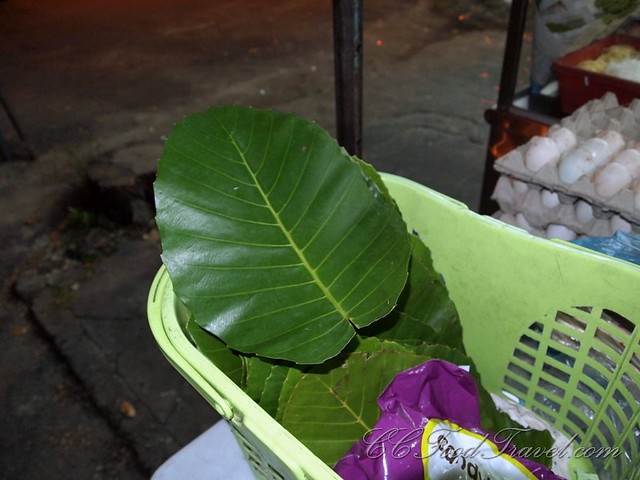 Special to Taiping take-away wrappers, are these thick, big plant leafs harvested from lowland wild tropical shrubs which grows less than 10 feet in height. The leaves are laid over newspapers then shaped into a cone to hold the fried noodles. There is no fragrance from the leaf and in my opinion, adds nothing to the flavor of the fried noodles other than to keep the fried food hot and prevent the oils and moisture from seeping out. Taiping residents will beg to differ. 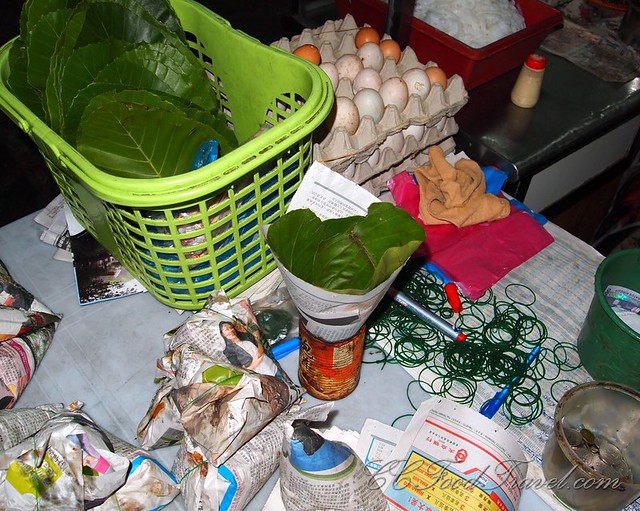 There are lots to see and do in Taiping but if you venture out an hour drive further there are the attractions of a charcoal making factory in Kuala Sepetang, cheap seafood, and coastal attractions of Kuala Gula Mongrove Forest.

I will definitely have to drag Ciki here one day.. many more things to explore. 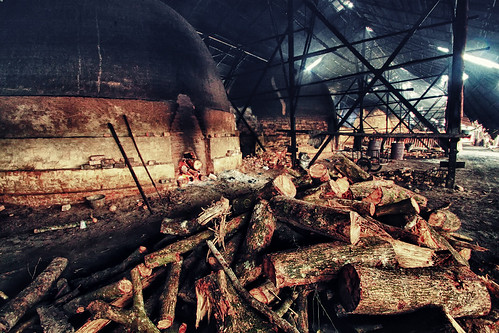 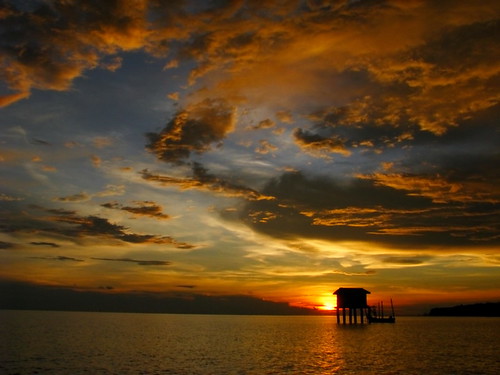 Just to set things straight, it wasn’t all play and no work. I did make it down to the excel convention center for my…