We are always glad to attend one of the most incredible gala dinners in Kuala Lumpur, hosted annually by the Norwegian Ambassador to Malaysia, Hans Ola Urstad. We are of course, referring to the Norwegian Seafood Gala Dinner 2013, held at Mandarin Oriental Kuala Lumpur. 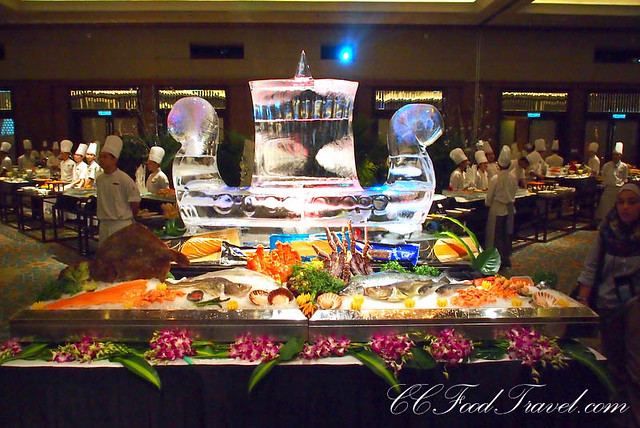 The centrepiece – ice carving of a Viking ship, and an iced table featuring the king crab, a massive scallop, lobsters, crayfish, prawns, salmon and haddock 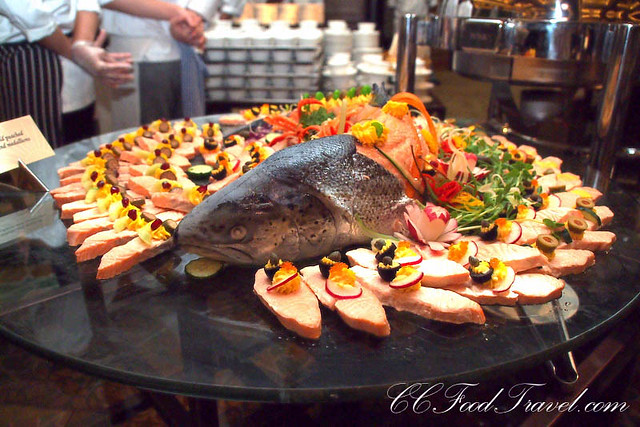 The dinner is usually held in conjunction with the Malaysia Norway Business Council (MNBC) Innovation Award. The award is given to an outstanding member of the council to acknowledge its excellent performance. This year the MNBC Innovation Award was won by Yara International ASA, the world’s leading supplier of mineral fertilizers. It also produces environmental protection agents to prevent air pollution. 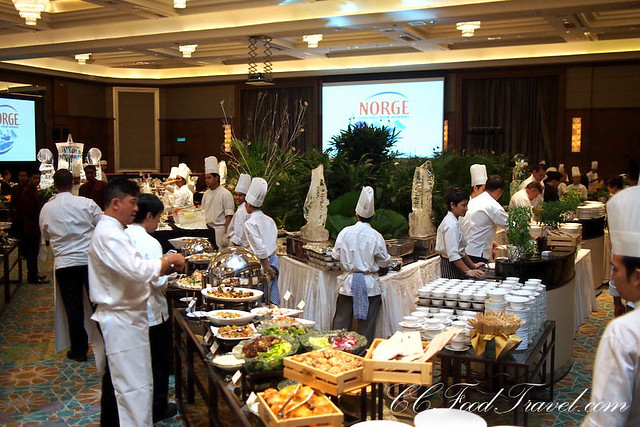 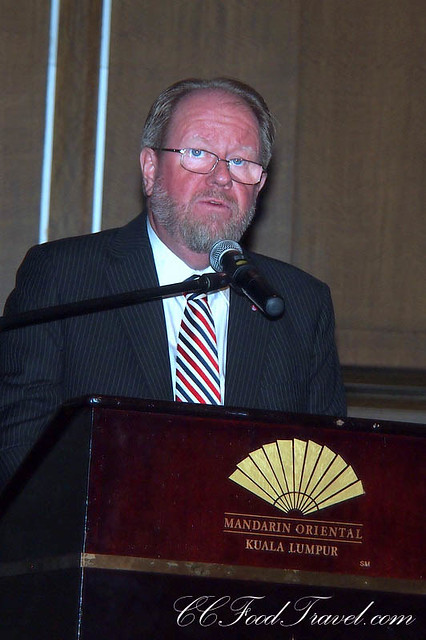 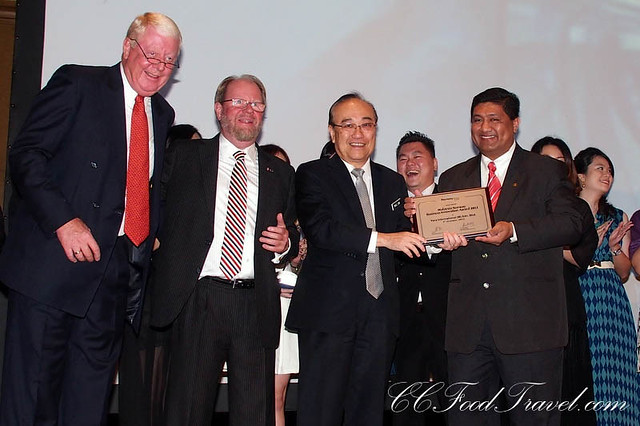 And this distinguished Chef (and no stranger to our readers), would be the super talented, Chef Frank Naesheim, who is responsible for orchestrating and leading the kitchen in this Gala Dinner, this time, bringing with him a team of 11 chefs from Singapore. The Norwegian chef who now resides in Singapore is most famously known as the Salmon King in Asia, and he first came to work as executive chef at the Vikings Restaurant in Singapore in 1987. 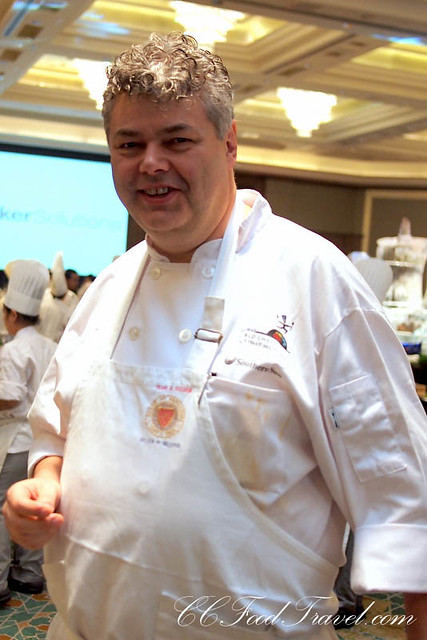 A few years later he established Snorre Food Pte Ltd, to import quality Norwegian seafood and focused on promoting it in Asia. He launched cooking competitions, focusing on salmon, as part of the Salon Culinaire, a high-profiled Asian culinary event in Singapore. Naesheim’s Salmon King title is well deserved. He has written a cookbook Norwegian Salmon in Asia, produced recipe booklets for salmon and organised the Salmon Buffet of the Century in Singapore. 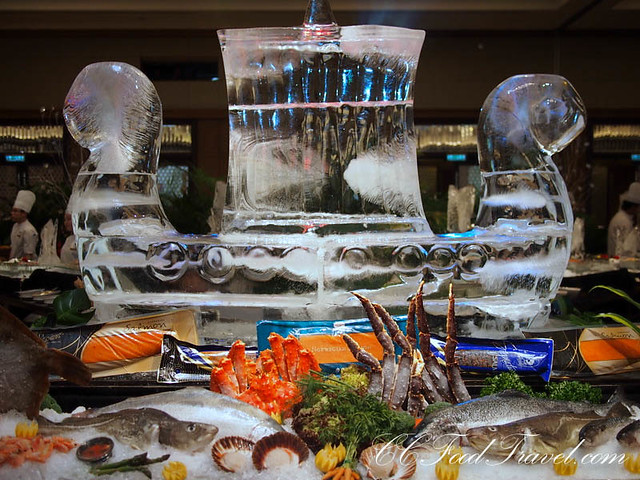 “Always rise, to an early meal, but eat your fill before a feast. If you’re hungry, you have no time to talk at the table.” – The Havamal 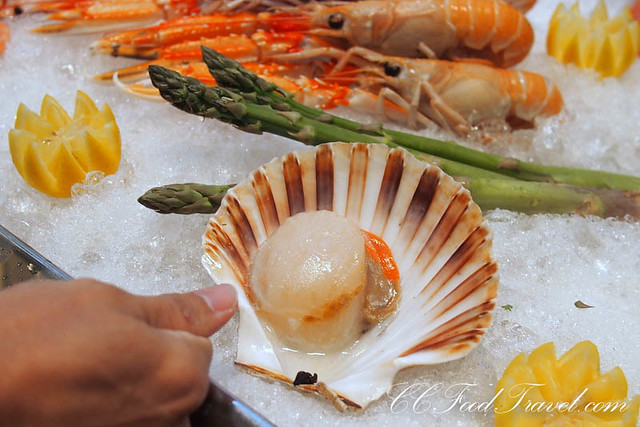 And since we have attended this event almost every year, since it started, we can safely say, that the spread gets better each year. The grand ballroom always looks aptly grand and its incandescent lighting accentuates the centerpiece (ice sculpture of a Viking ship) as well as  long tables that heave under the weight of 72 varieties of cold food, and four live stations manned by chefs who work hard to dish out the specialty dishes.  I always makes a bee-line for the live stations, but once you have eaten your fill, you will notice a staggering choice of seafood that ranges from king crabs, lobster, scallops, to salmon, halibut, cod, monkfish, turbot and haddock! 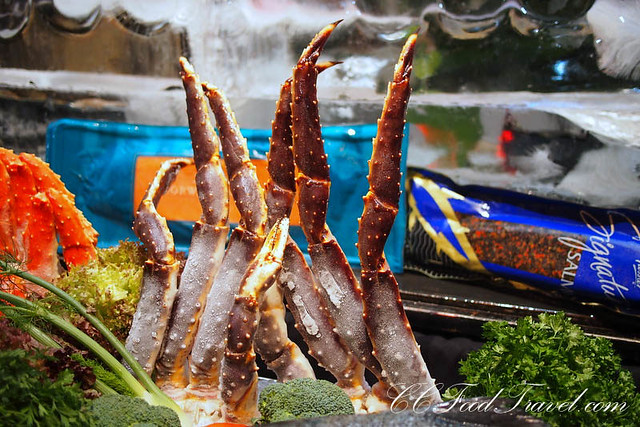 So where should one start? I say, follow your nose, and work your way down the buffet line, if that’s any advice to go by. I find Singapore restaurateur and consultant Sam Leong’s station quickly and settle into the queue – his was an incredibly addictive Home-made Noodles with king crab leg in milky chicken consomme that I kept going back for. It was exactly like a tasty seafood “mien-seen”. The noodles were smooth and cooked al dente, and the flavourful chicken and crab stock was out of this world! 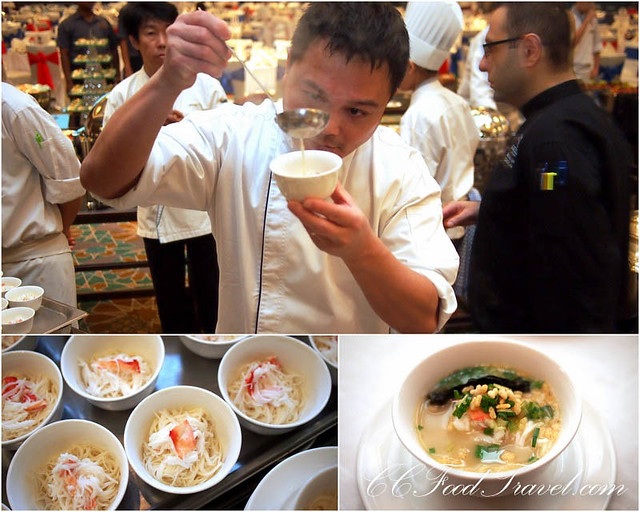 I also loved the King Crab and Scallop Pastille with mushroom, savoy cabbage fondue and saffron mussel cream – super rich scallops and king crab all-in-one, was like having the best things in life come together at the same time! 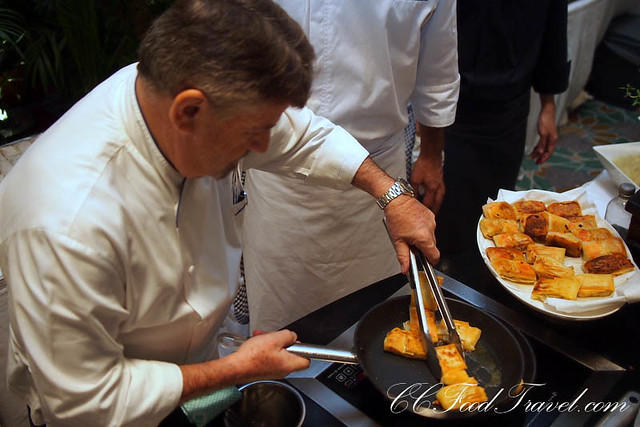 In this photo : Chef Otto Weibel (and his partner Chef Michael Mueller looks on) in charge of feeding us well, on these delectable, King Crab and Scallop Pastilles 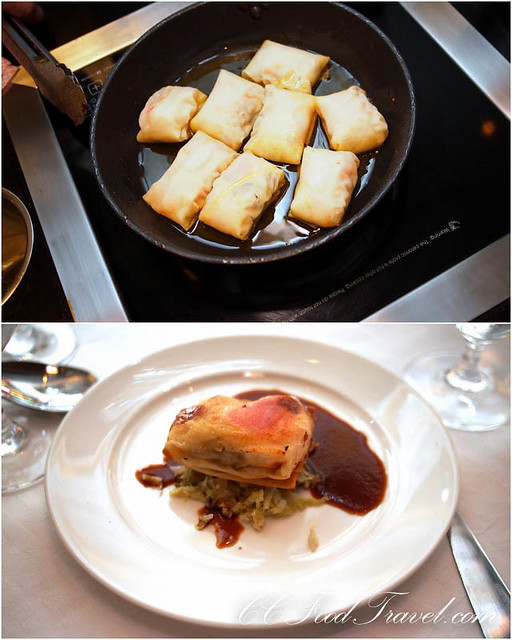 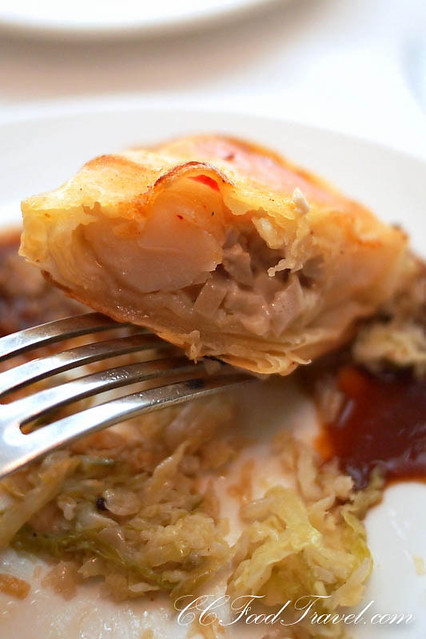 I also loved the tastiness of the Cured Salmon with Sushi Rice Espuma and Shrimp Cracker. 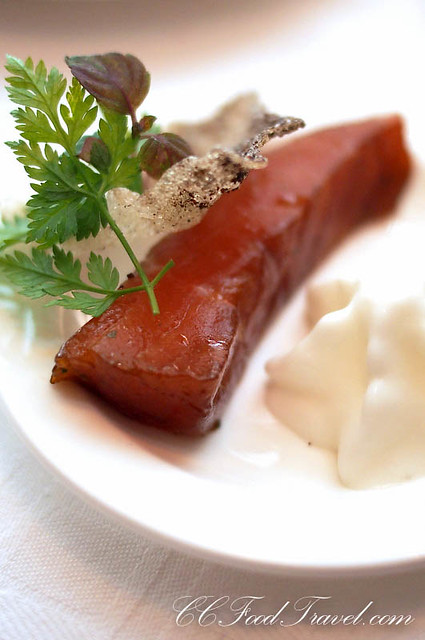 The Prawn Soup with Fennel Salad and the Potato and Leek Cream Smoked Halibut, Spinach and Eggs were delicious as well. We found this at the counter manned by chef Geir Skeie and Kathrina Skeie. 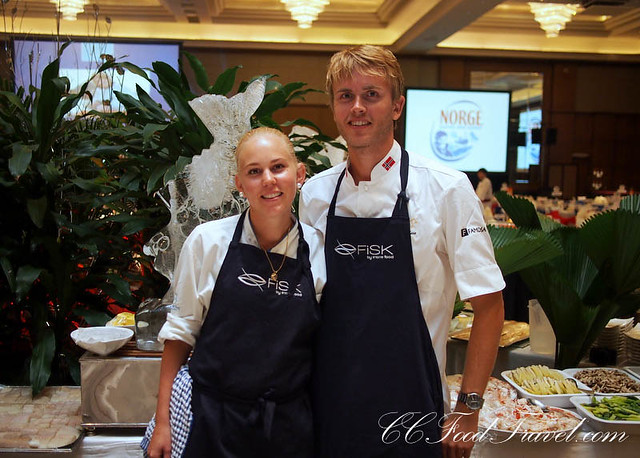 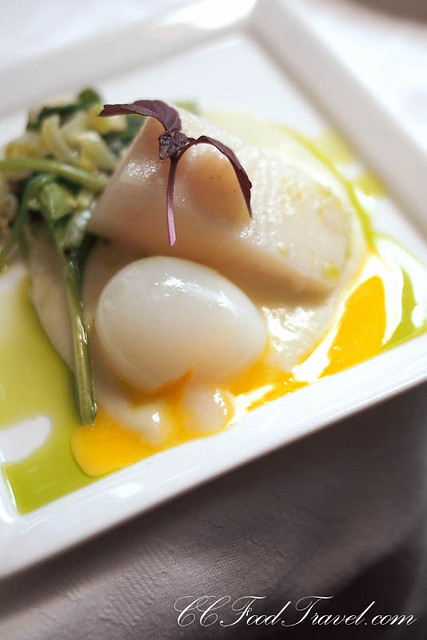 Later, we would soon find out that the Sous-vide Salmon Fillet with red capsicum coulis and tamarind sauce would be to die for! 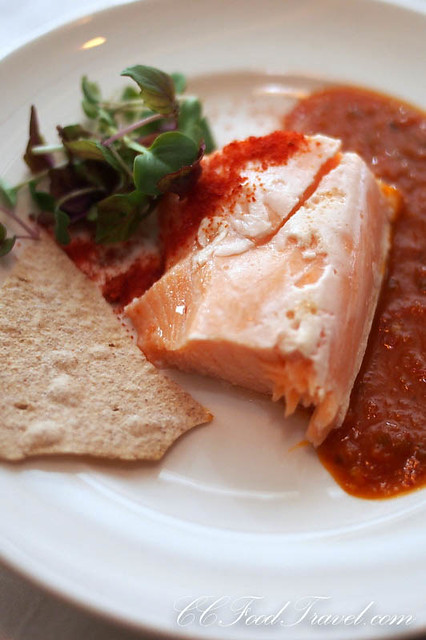 Sam Leong’s wife Forest Leong was also manning a station – another huge winner was the Sous-vide Salmon Fillet with red capsicum coulis and tamarind sauce. Succulent and flaky does not begin to describe how wonderful this dish was.

There was a staggering amount of fresh seafood at this event.. with almost 700 guests to feed, you know this is a no-messing around sort of spread! 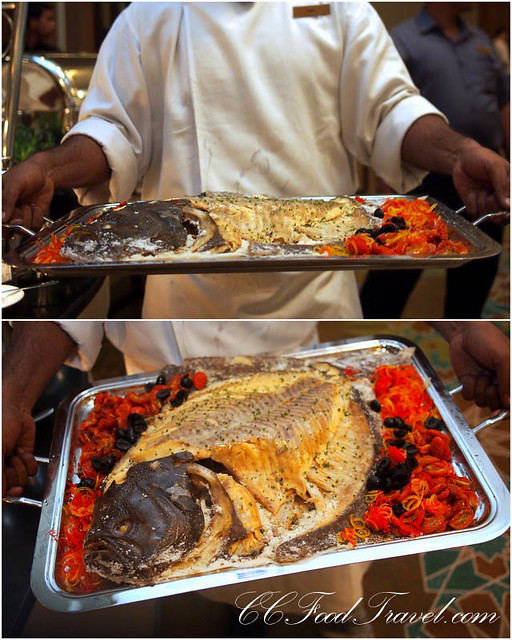 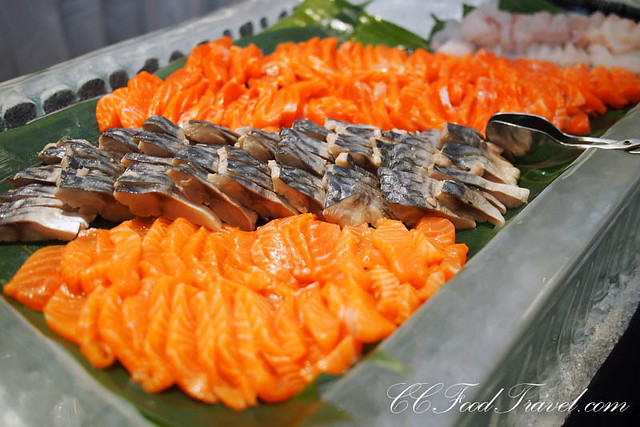 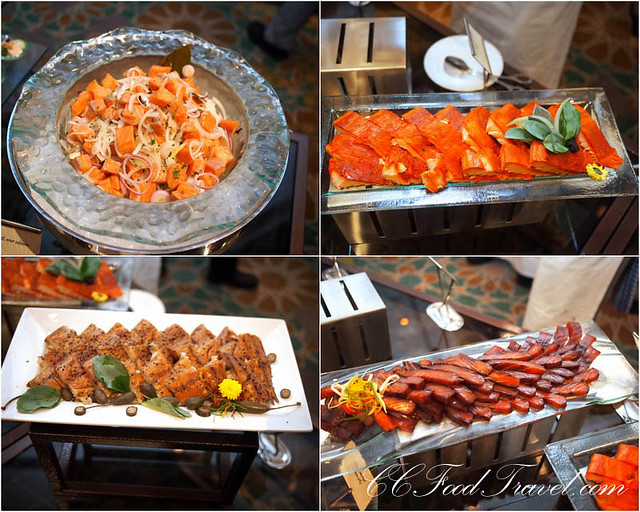 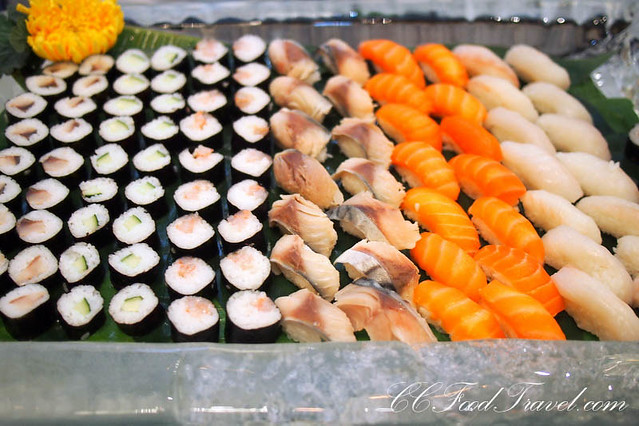 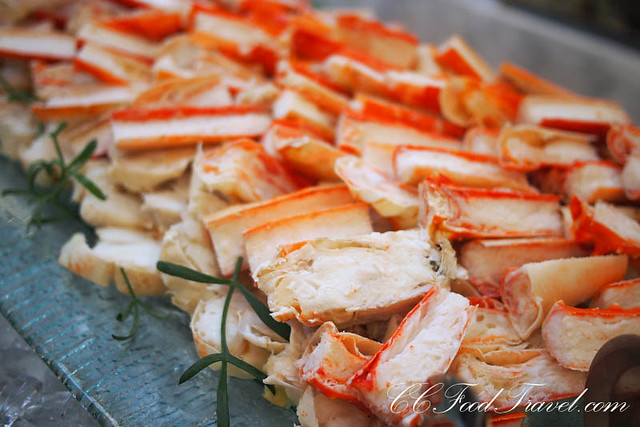 And if that wasn’t enough, the dessert counters were located outside the ballroom in the foyer, and again, there was a massive selection of sweets for the guests to partake of, and to eat their fill. 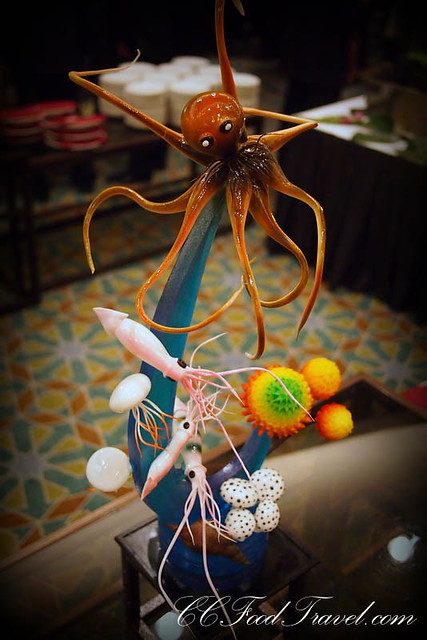 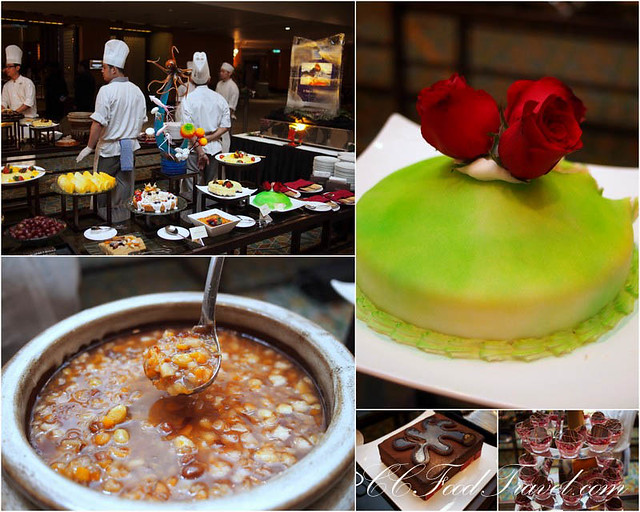 The night was still young as Norwegian singer and songwriter Marit Larsen took to the stage. Larsen was made famous by the pop duo M2M, with more than 12 million albums and singles sold. More recently she has pursued her own music career releasing the albums Under the Surface (2006), The Chase (2008) and Spark (2011).

What a gala spectacular. Somehow I suspect that next year might top this one, although how, I am not sure. It is hard to top perfection!

It’s Friday, woo-hoo! Here is this week’s Blogger in the Spotlight (BITS) Marian Eu, who is more famously known for her weekly food reviews…