Ahh.. Bali.. Only 3 hours by flight from Malaysia, and the island is so small you can actually drive around it in a day. On the coast, the beaches, the surf, and as you go further inland, the rice terraces, enchanting temples and annual religious ceremonies.. is all part and parcel of why I find Bali so irresistibly exciting. 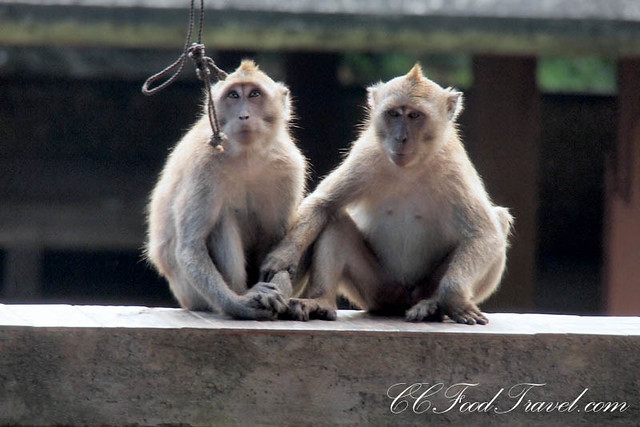 On our recent trip to Bali, we found even more exhilarating things to do. Here are our tips on 10 things to do in Bali!

Officially known as Pura Luhur Uluwatu (“Luhur” means “something of divine origin” while “Uluwatu” can be broken into “ulu” which means “land’s end” and “watu” means “rock” in the old language) this place is famous for that legendary temple, perched on a cliff, with some incredibly awesome backdrops of the sea. The waves break majestically at the foot of the steep cliff where the inner sanctum of the pura is perched. Beware of the mischievous monkeys who love to steal things from tourists.. just because they can. A streetwise guide will cure them of their itchy hands as they will be will equipped with a catapult to scare the monkeys off! Ladies you may wear shorts as it can get really hot and humid in the afternoon but you will be given a sarong to cover up. 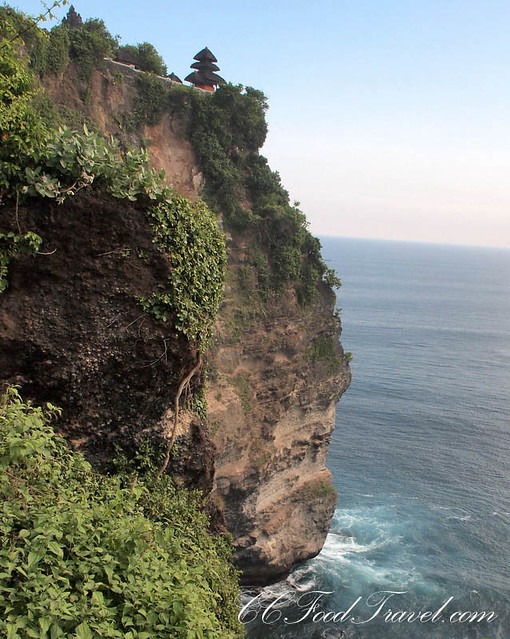 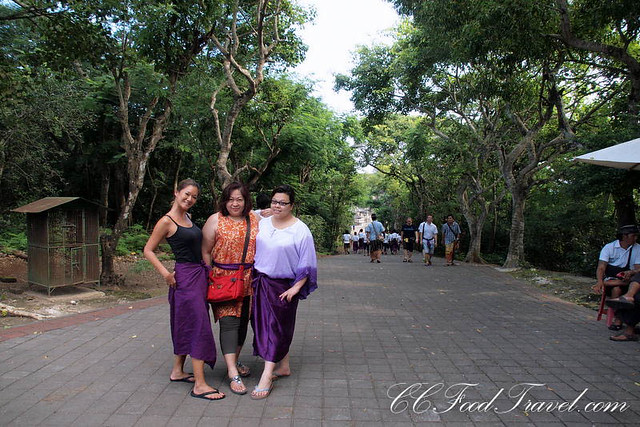 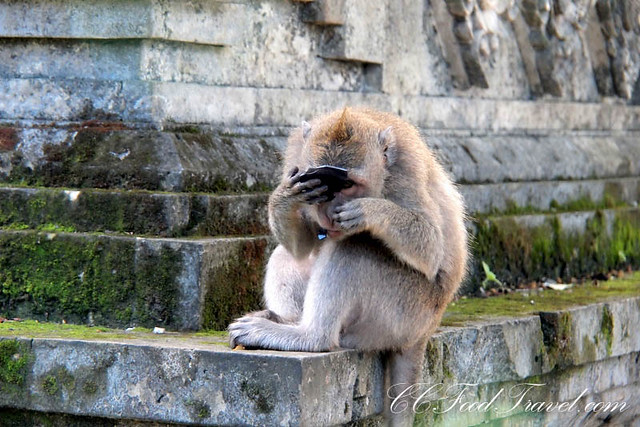 2. Work out on the Beaches

Don’t just eat. Go for an early run on Jimbaran beach where you will catch fishermen hauling in their catch. The ladies will sell the fish fresh on the beach so that’s a great place to pick up some fresh seafood if you plan to cook later. Apart from running on the beach, surfing is something everyone should try their hand at, especially when confronted with such spectacular waves each morning. There are huge benefits in surfing, and the best place to learn it (where the waves are more forgiving) is in Bali. We headed out to Seminyak for this. Of course before you can surf like a pro, you need to learn how to surf. And the first lesson, includes learning how to get on your feet. 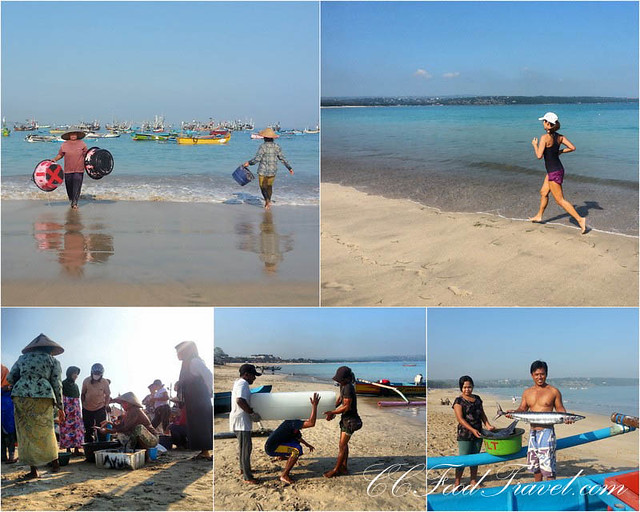 running on Jimbaran beach in the mornings.. great sights await! 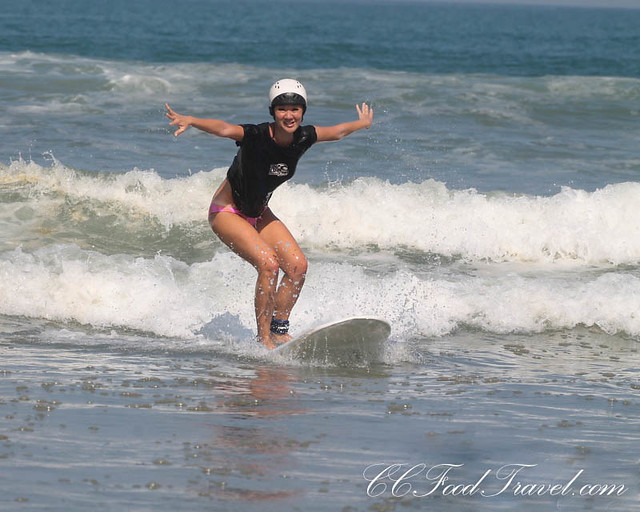 surfing at Seminyak .. even I was standing by the end of the lesson!

But for me, this was a challenge because I am very clumsy and bad with balance. But by the end of the lesson, even I could stand (yay!) Surfing turned out to be so fun that by the end of it, 2 hours had gone by, and I just didn’t want to quit.

Nyepi (day of silence) occurs annually in either March or April, but you can’t talk about Nyepi without mentioning the day prior to Nyepi, Pengurupukan, when the Ogoh-Ogoh are paraded up and down the streets borne on litters by young men from the local banjars (communal units within a village). Ogoh-ogoh are huge skeletal structures constructed of balsa wood depicting animals, humans and figures from Hindu and Balinese mythology.

As the big day approaches, papier-mache skin is applied as well as wigs, garments and other accoutrements to make these giant beings pleasing to both the Gods as well as Demons. There are various explanations of its purpose – to amuse the spirits so that they do not get up to mischief, to confuse the spirits or even just to upstage the rival banjar by having a much better Ogoh-Ogoh than theirs! Usually the celebration goes hand in hand with copious amounts of arak (booze). Yes indeed, the Ogoh Ogoh represent the evil of the past year and are paraded to show them being discarded. Some can represent the evil of corruption, bribery, family abuse, sexual abuse, and all the races and community in Bali will partake of this festival. After the Ogoh-Ogoh complete their parade they turn around and go back to where they came from. Some are burnt but since there is a competition to choose the best creation, the winning Ogoh-Ogoh is kept and put on display in front of the Banjar offices. This is a really loud and colorful parade, not to be missed. 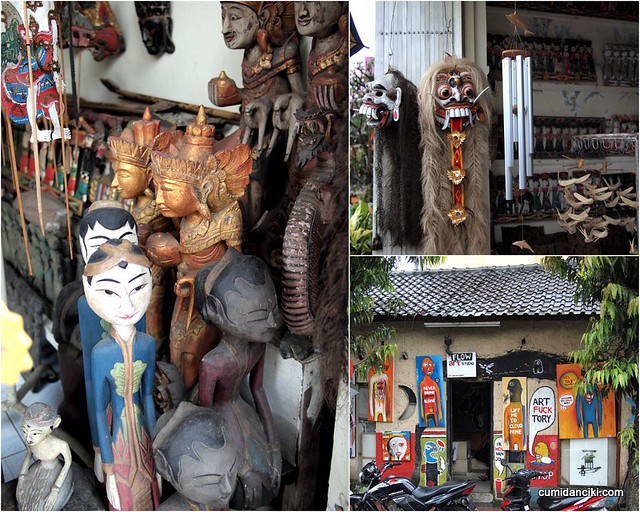 Ubud is one place you need to visit, if you are into arty-farty merchandise. Starting in front of the Ubud Royal Family Palace, start walking and checking out the gorgeous boutiques that pepper the area. This was perfect for the shopaholic in me. Everything from contemporary, stylish goods to typical Indonesian clothing and handicrafts, with prices which can sometimes be negotiated in a less frenzied atmosphere than the central market, you name it, they had it. A lot of variety is packed into each single, artfully designed shop and things can seemed a little too commercial sometimes but hey, times, they are a changing and Ubud looks so much more trendy these days than say 5 years ago. Enjoy bargaining for your loot.. it’s part of the process. 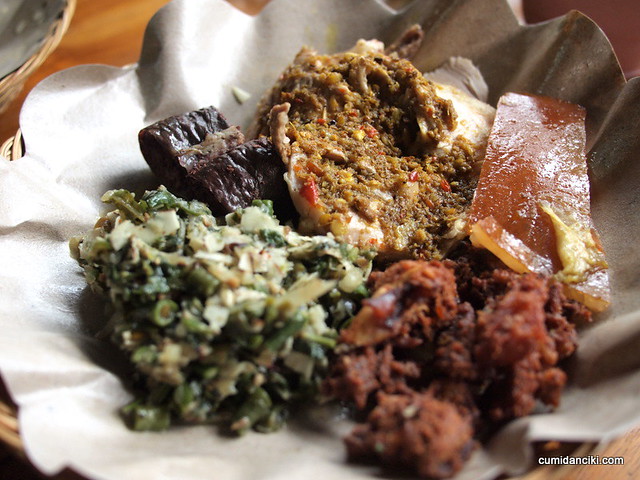 Sandwiched in between Ubud’s central banjar and Jl. Suweta’s upmarket shops and restaurants stands the legendary Ibu Oka’s Warung Babi Guling. The food stall has stood here for the past 20 years, serving up what many say is some of the best roast suckling pig on Bali. The pig is good, but slightly overpriced. We don’t know if we arrived late, but for a rather small portion of the world renown pig , some vegetables, two small sausage cubes and just one small serving of skin/pork crackling, the set meal set us back by more than RM20 bucks per head. Back in 2006, we had babi guling in the Kintamani region and that only set us back by Rp12,000 (RM4) The Babi Guling at Ibu Oka is undoubtedly soft, supple and delicious but overpriced. That’s what you get for eating at the legendary as opposed to the undiscovered. 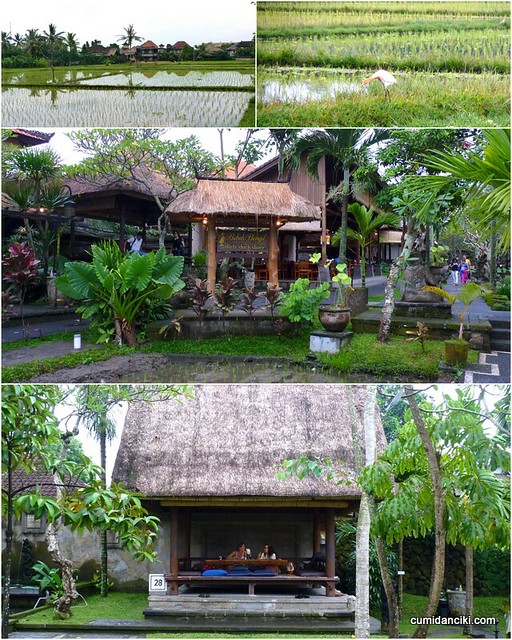 bebek bengil .. located in the midst of the padi fields.. very scenic!

Bebek Bengil a.k.a. Dirty Duck Diner, is the best place to try Ubud’s famous dish.. a simple deep fried duck dish that is so tasty and crispy it will have you begging for more. First stewed in local spices, then deep-fried, the duck here is pretty delicious and not quite as oily as some places but again, our main complaint was the size and portion of the meal. When the waiter said that half a duck for you is fine, I nearly passed out. When it was served, the portion was so small I could have eaten two half’s. As in a whole duck, all on my own. Hmmm, Bali fowl are really puny. 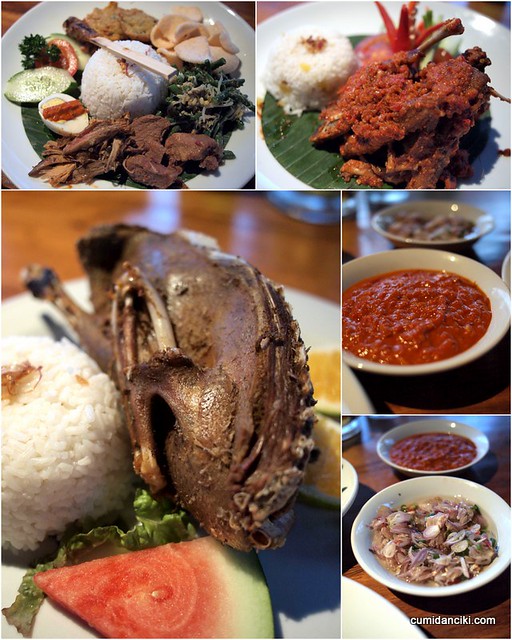 For the adventurous, a climb up to the volcanic Mount Batur is a must. The best time to climb is the morning. Most groups begin their ascent around 4am, hitting the summit at 6 to watch the sun slowly rise over the Lombok strait. Bring a jacket and be careful at the summit. A careless climber has fallen into the cauldron before, and as we all know, Batur is an active volcano! You can arrange a trip up the mountain with your guest-house or driver. It is not too physically demanding. And if climbing Mt Batur is not enough for you then head on out to Mt. Rinjani on nearby Lombok Island. It is more challenging and it takes several days to reach the summit. 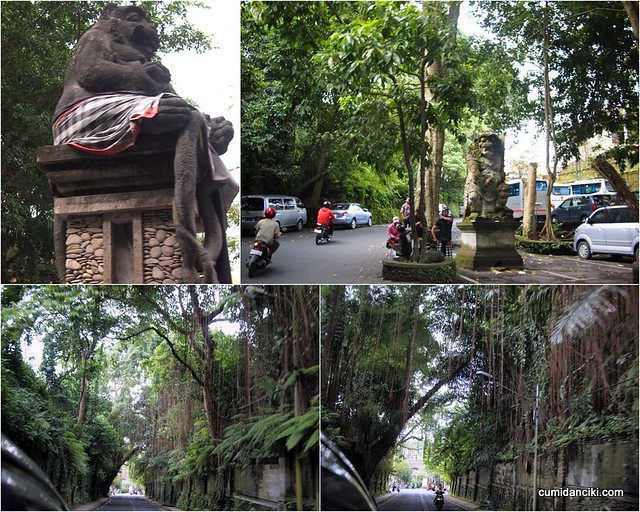 The Ubud Monkey Forest is a nature reserve and temple complex in Ubud, Bali. It houses Crab-eating Macaque monkeys, of the Macaca fascicularis genus species. There are four groups of monkeys each occupying different territories in the park. The Sacred Monkey Forest is a popular tourist attraction in Ubud and also contains at least 115 different species of trees. The Monkey Forest contains the Pura Dalem Agung Padangtegal temple as well as a “Holy Spring” bathing temple. Within Balinese Hinduism, monkeys play a pivotal, almost sacred roll. The dual nature of monkeys is especially reflected in the Ramayana (a very popular Indian epic poem) – isn’t the fight between good and evil an ongoing theme for so many things in life? For Malaysian who are used to seeing these friendly creatures, it really reminds us of home. Some may find these monkeys vicious, but we are totally at ease with these cute creatures.

8. Stay out on the Rice Terraces, in a Padi Villa 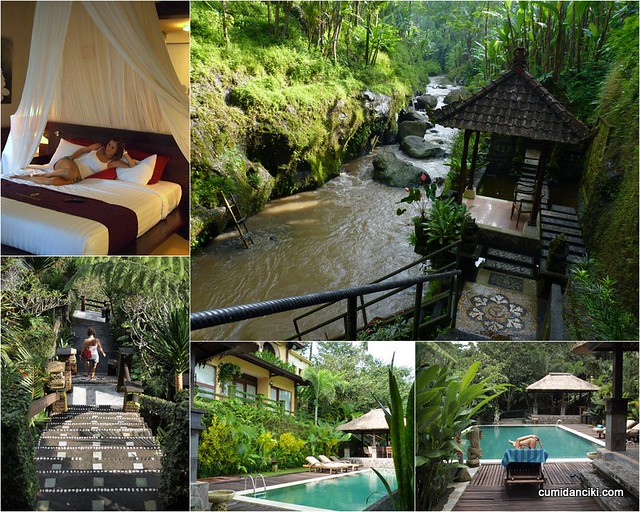 For those of you who left Kuala Lumpur or your part of the cosmopolitan looking for some peace and quiet from the screaming traffic and pollution, this has got to be the place for you. Plush villas overlook the relaxing lush green padi fields and make a good place to relax at, after a tiring day of shopping and sightseeing in Ubud. It can get a little musty in the Villa if the weather is wet, as the Villas are located out in the padi terraces, so we recommend you go during the hot/dry season (middle of the year).

9. Have Seafood on Jimbaran Beach

Follow the smoke trail to the beach, where hundreds of tables pepper the sand and just as many folks dig into freshly barbecued seafood. The smoke generated by coconut husks used as fuel to BBQ the meats, add flavour and aroma to the dishes no doubt. Well, though the seafood here is rather expensive, and you could call this somewhat of a tourist trap, still, the experience and ambiance by the beach could be worth it. The place has cleaned up a lot since our last visit, and dining here would mean you can tick ‘dining at Jimbaran beach’ off the list! 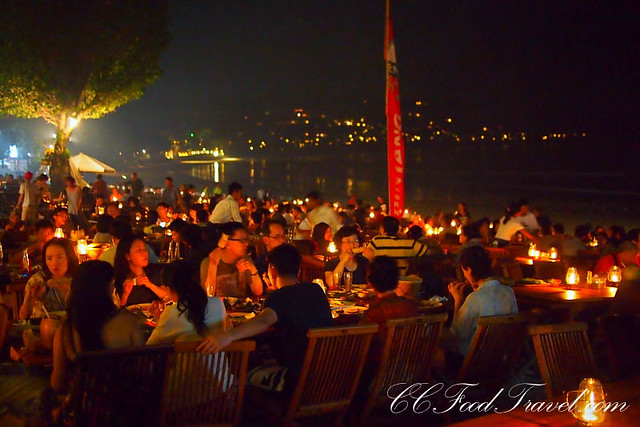 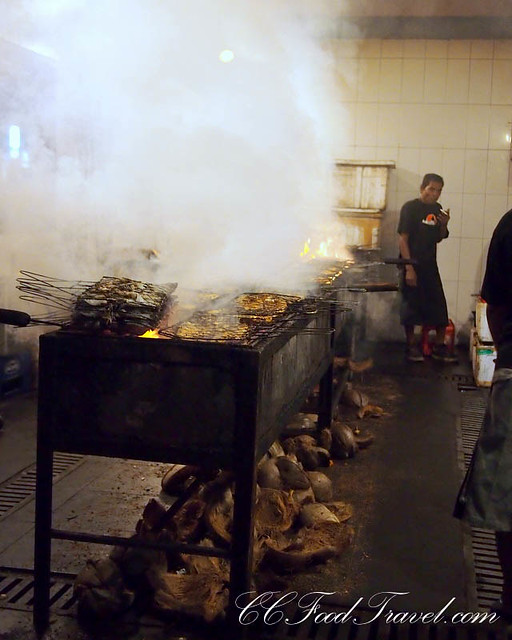 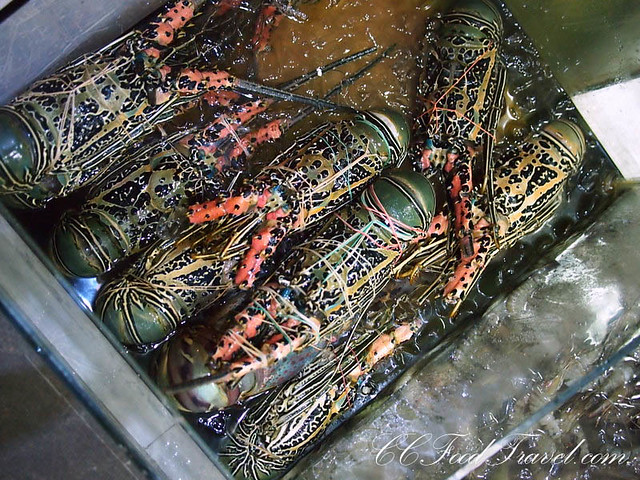 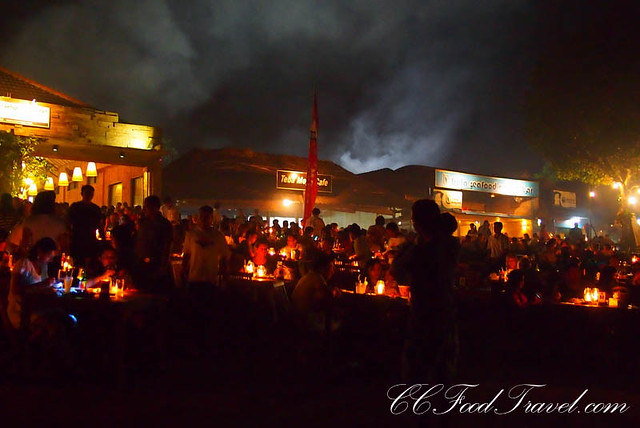 10. Have a Balinese Massage

When all had been seen and done, and every last muscle screamed for rest, massage is the one thing on our list! For just Rp 50,000 you can get a 1 hour body massage in Ubud at any one of the shops along the main-street, Hanoman. It is inexpensive and clean enough. The skill of the masseuse might not be 5 star but it gets the job done. Opt for a foot massage if a full body massage is not your thing.

Thanks for the FB love;)

Do you remember back in the day when he first proposed? Or when he took you shopping for the perfect engagement ring? Well, that…