Till this day and age, Burma or Myanmar

Encounter dark, skinny men wearing skirt-like longyi, young boys and grannies alike, with orange and black betel-chewing teeth, woman and young women with patchy white thanaka smothered all over their faces. Turn back the clock and you will see that Myanmar is not unlike Malaysia, perhaps 30 years ago.

This is the authentic Asia, with it’s rickety buses, lack of electricity, generators that don’t work, air-conditions that spew hot air, squat toilets, but also with the nicest and warmest of locals who greet you with arms wide open – trusting – untainted by tourism as yet. This is where the old school travel adventure lives on. Forget the internet, forget your smartphones, forget your homes. Immerse yourself in a culture where holy men are more revered than movie stars and golden buddhas are bathed every day at first light. 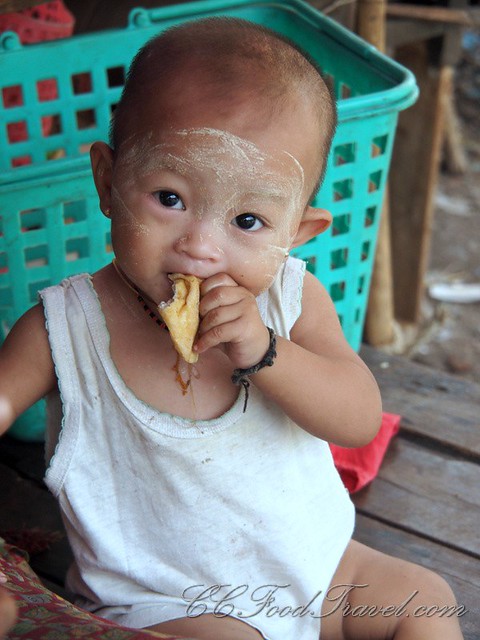 We arrived in Yangon city mid May, during the tail end of the hot season, but nonetheless still sweltering, and with light showers several times a day. The best time to travel Myanmar is between November to February because it’s cooler. You probably don’t want to travel here from June onwards as it’s the monsoon season unless you enjoy walking in the rain and trudging in dirty muddy streets. 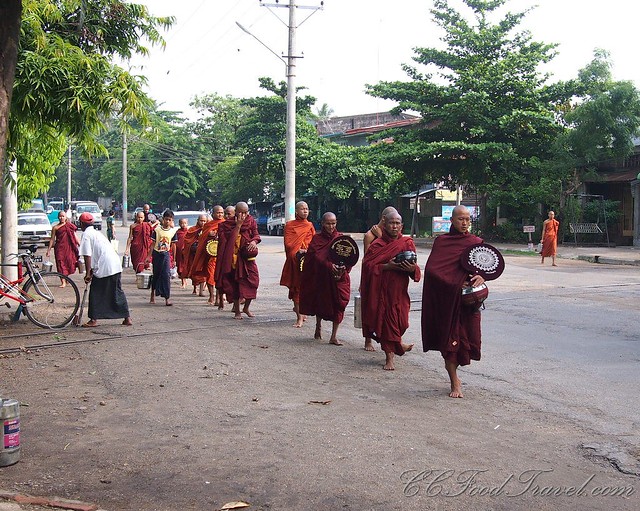 In the mornings, monks walking the streets to beg for alms and food from businesses, or heading to the temples to study scriptures, is not an uncommon sight. A humbling life that builds a sense of humility. 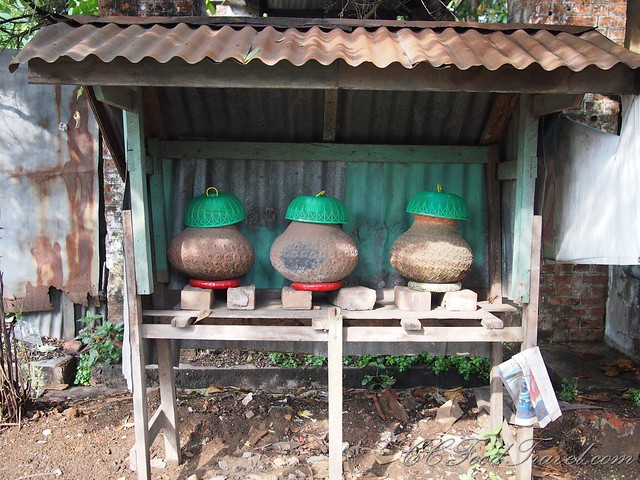 It was really warm during our visit. The litres of water consumed evaporated away from our skin and sweat. You never stop sweating even after a cold shower. The country recognises this and you will find water jars on every street corner for anyone to drink from. 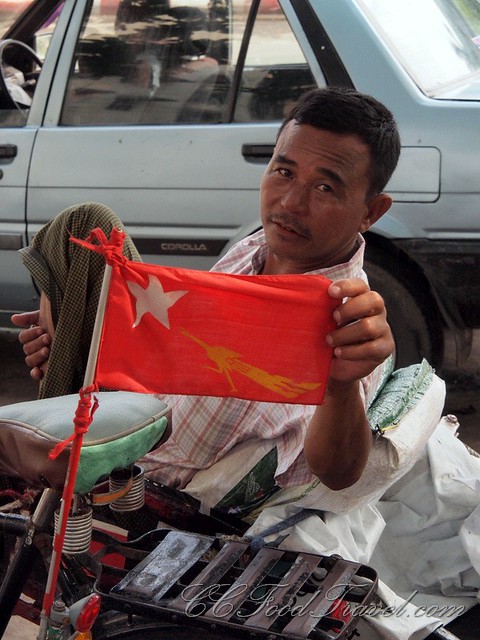 Myanmar has a population of 58 million. It is twice the size of Peninsular Malaysia (West Malaysia) and bigger than Thailand. It is a difficult country to manage with over 130 ethnic groups and a military government that sets its agenda based more on personal interest than for the population. Civil unrest from ethnic groups wanting their independence in the North and South is a constant problem for the government. 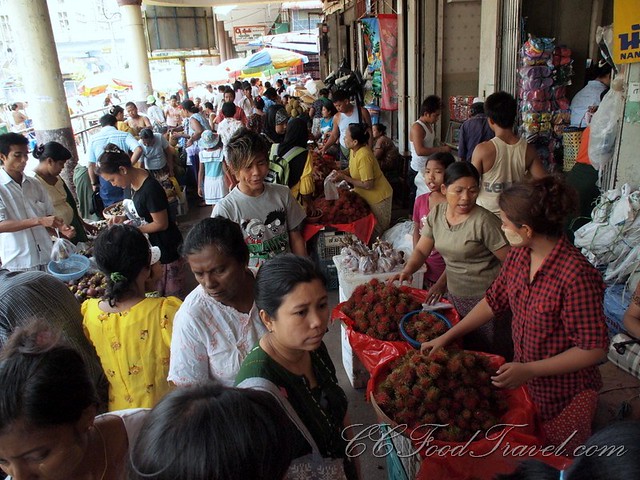 It is obvious that most of the population is found in Yangon city where there is better work prospects -earning to live. It is not earning to save. Though there is a growing middle class, many can only live day to day because of the high cost of living around the country. Yangon city is huge with 44 townships therefore making trips across the city is a hassle and expensive. With a large population, it is bursting with activity from the wee hours till around 9pm. There are so many people walking about, doing business, shopping and driving their cars. Trishaws and motorbikes have been outlawed on the streets of Yangon to ease congestion but still, its congested albeit less horns being blown. We love the busy-ness of it all. There is so much life and activity here. Every street in central Yangon is super busy especially in China town and Little India, not surprisingly. We could live here if not for the intermittent electricity. In the evenings, we learned to anticipate the power cuts across the land, and then the generators kick in. These generators themselves are so old and unserviced that they breakdown too, and it’s not uncommon to wake up in the middle of the night, sleeping in a puddle of your own sweat, as there isn’t even a whisper of a breeze. The whole country averages 4-5 hours of electricity a day except in the administrative capital of Naypyidaw where the availability of 24hour power, new buildings, landscaped gardens and nice roads to drive on seems like a heavenly kingdom. 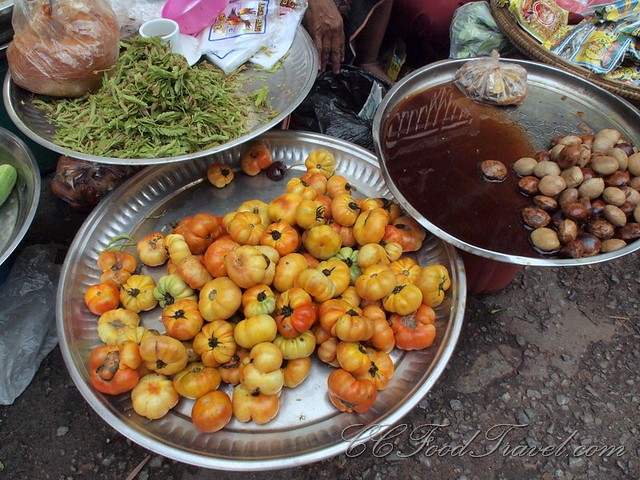 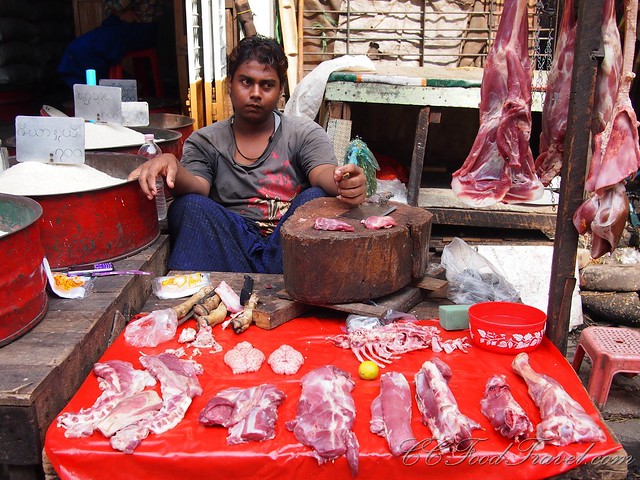 A neat butcher displaying everything from brains to the hoof. 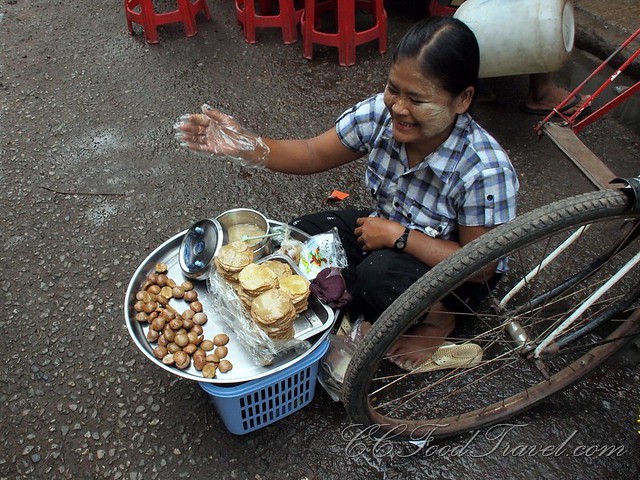 Not sure what’s the name of this fruit or nut that resembles a large chestnut – it might actually be a chestnut. The lady insisted we try some and offered 2 pieces to sample. Pressed like a small pancake and served with some sauce and oil, it has a distinctive taste of nuttiness, slightly sweet, and a creamy texture. (Recently spotted at a local night market, these seeds are called Jering (Pithecellobium jiringa). In Myanmar, its called Da Nyin Thee. The fruit and plant has medicinal properties) 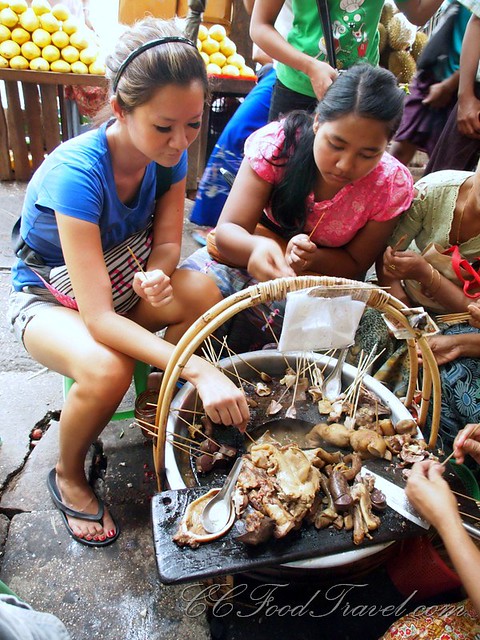 Whenever there is offal available, Ciki seeks her cuts. While I’m not a fan of innards, I was hoping to try some fried bats which I’ve read about but no bat sellers were found throughout our trip. Must be low bat season?

The people here are kind.. charming to a fault even. They allow you to bargain, take photos and ask questions. They are trustworthy. Maybe we were lucky but generally people watched our things and helped us out along the way. “Bonus” gifts are not an uncommon experience either, like take for example, Ciki would finish her ten sticks of Pork offal, pay, and the lady would offer her one more on the house. This sort of generous nature from a nation that’s so poor, is really touching. And there were not one, but several encounters like this. 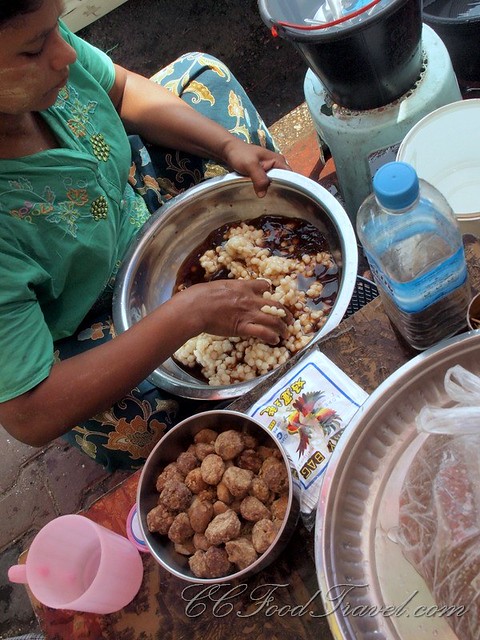 Street side food prepared by hand everywhere. I couldn’t get used to all the naked hands handling food being served. Its fine to see chefs tossing salads with their bare hands on TV or in a clean kitchen but on the dirty streets, it’s not an enticing sight. 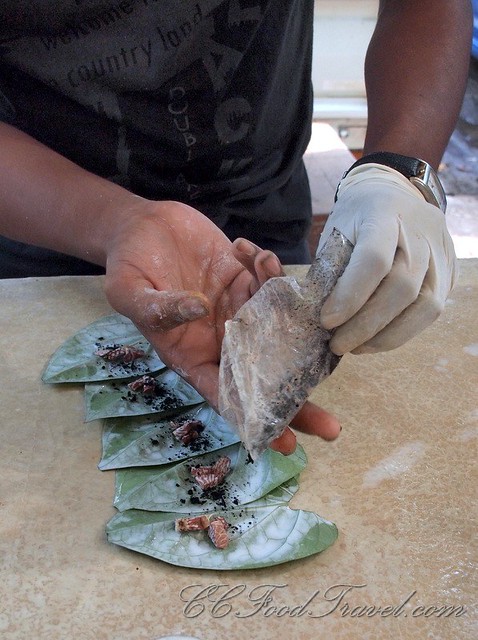 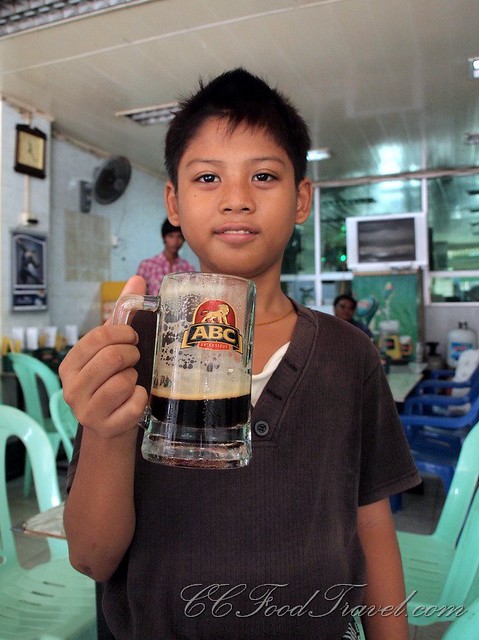 Barely 12 years old, the young attentive waiter above, who loves Manchester United, posed for us with Cumi’s stout. Many children in Myanmar work to get some pocket money and to ease their parents financial burdens. 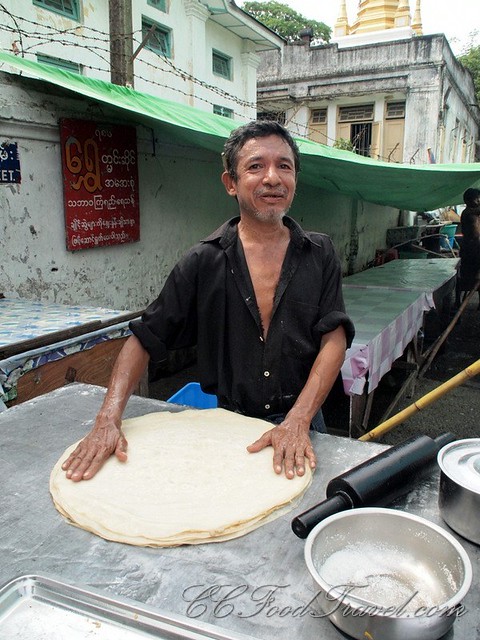 A street side vendor from Rakhine State who helped us with some directions. Having spent a decade working in Kuala Lumpur, this former resident of Old Klang Road returned to Myanmar in the late 80’s. He spoke very good Malay and decent English as well. He was making some type of flat bread.

The international and domestic airport is approximately 45minutes from the city center with regular traffic. Special accommodation licenses are required to host international travelers and obviously this is difficult and expensive to obtain for regular Myanmar business operators. If you don’t go with the fancier hotels, the guesthouses that do accept foreigners are at best 1.5 star rating in terms of international quality. Many are located in old buildings with unsophisticated interiors. Though the staff can be friendly, if you are a flashpacker in the 21st century used to wifi, 24hour electricity and sprite rooms, then guesthouse living conditions here are unappealing. From a south east asian perspective, the rate for a Myanmar guesthouse room is considered expensive. This might not be the fault of the owners since they contend with high cost of materials and licenses over cheap labor.

Unless you have a lot of travel time to endure long outstation bus rides with only 2 or 3 scheduled a day, you are probably going to spend quite a bit on domestic flights. We had seven and a half days of travel time to cover the main attractions of Yangon, Bagan, Mandalay and Inle Lake. Myanmar is large. We covered every destination by bus accept on our return to Yangon from Inle Lake. The 14hour bus journey would have been a real time waster.

We now leave you with our photo slideshow of life in Yangon. Click on image to see image descriptions in flickr. Our next post will be on our Top 10 Essential Tips for Independent Travelers going into Myanmar during the Hot Season.

If you liked this story, read all our posts on Myanmar –

If you liked this story, please kindly LIKE or FB too, cheers!

I had so many questions on Kong Kee on my IG feed,  I just had to get this post out. One of the best…