So from Bagan.. we head on to our next stop in Myanmar, Mandalay.

Arriba Mandalay! Myanmar (Part 1 of this tale of travel through Mandalay – it was so long we had to split up the post)

It would be nice to say, Arriba Mandalay! on this trip to Myanmar .. but,

Not quite arriba, though.

Our road to Mandalay was a long one, fraught with disaster.. a broken down bus, a mammoth wait for rescue to come, then a cramped ride in a 10 seater van with intermittent air-conditioning.

Ah yes, speedy Gonzales would have had, plenty of siesta time indeed! 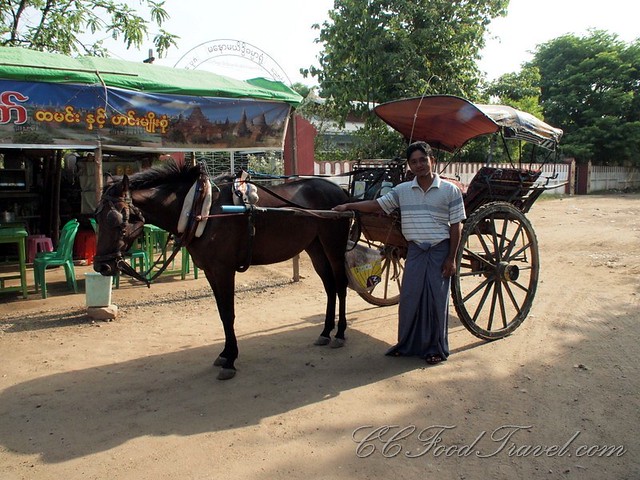 Our horse cart driver and his trusty ‘steed’ bidding us farewell. Friendly fellow as most Myanmarese are.

So what happened then?

30 minutes out of Bagan, our glorious japanese metal horse, Echigo Kotsu, which the ticket seller promised us would be the most comfortable, and the most luxurious compare to 2 other scheduled buses, broke down. We had just paid a premium foreigner price for poor air conditioning and we were now stuck on the hot sandy plains of Bagan. We had plenty of mineral water which warmed up as the degrees climbed, eventually making us dream of an oasis of cold carbonated drinks. We had a driver and his assistant who were just too embarrassed to look us in the eye or to offer us any comforting words. Finally after much feet shifting, eye-rolling and shoulder shrugging, we were told that an engine part was defective and irrepairable, so we had to wait for replacement transport to arrive. 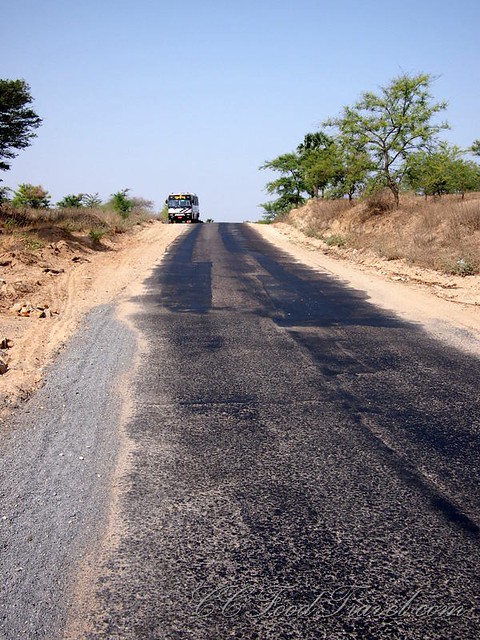 So here we waited with 2 French Canadians and 2 French nationals whom we would later frequently bump into, throughout our travels. Without much to do, each one of us took turns to nag the driver or a local to call the office to rush the transport to us. You would have thought that having mobile phones would solve matters faster, but it actually seem to slow things down to a crawl. This setting reminded me of Priscilla, Queen of the Desert with the exception of drags. Of course, it would have been more entertaining, had the drags been around.. along with some ABBA music, of course. 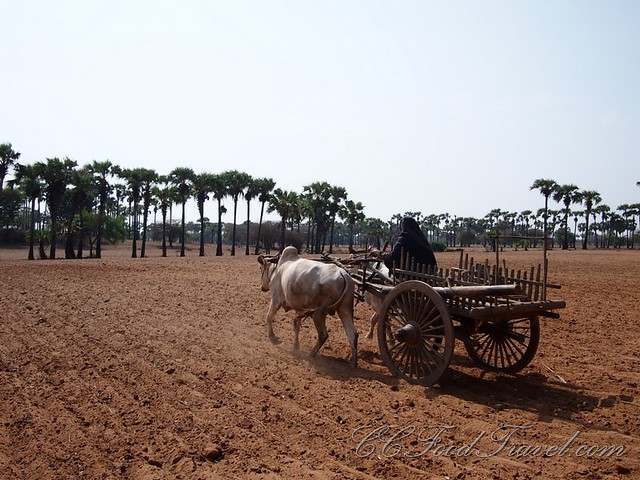 Bullock cart tilling the sandy arid land. I can’t imagine the grounds here being lush even when the rains come. 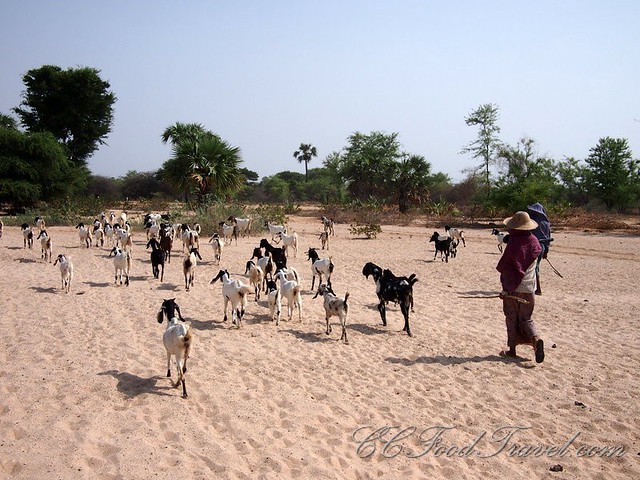 When our van finally arrived almost 3 hours later, our relief was shortlived as it turned out that we had to cram 12 people with baggages and delivery items into a 10 seater. An air-conditioning system with a failing compressor added further discomfort to the journey. Well, at least we were moving again.

The passing scenes of people tilling the land, building new roads and villagers going about their daily chores, helped ease the uncomfortable ride. Three Myanmarese choosing to sit with their backs to the driver and co-driver seats, began feeling the heat from the engine dissipating up through the thin carpet. They were definitely not rolling in the lap of luxury, especially a lady who sat in the center where the engine was mounted below. Grimacing from heat and with no where to move to, Cumi offered his sandals to the lady, to sit on, as a cushion and protection from the heat. The rest of us, packed like sardines with bent sweaty knees, were at least seated on cushions. 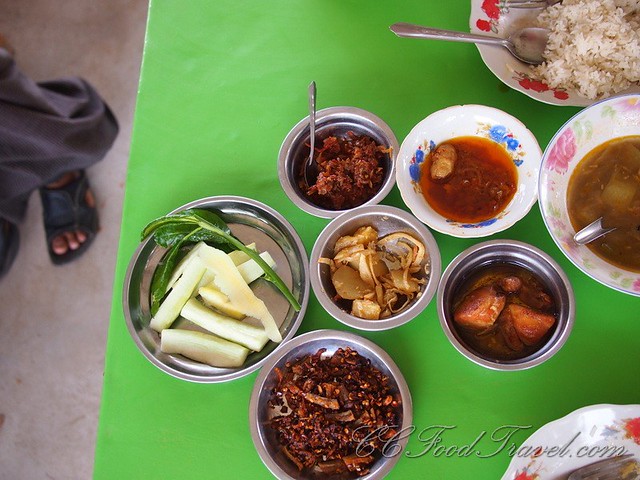 A much needed lunch break with Myanmar staple food. Rice with variety of meat curry and vegetables. 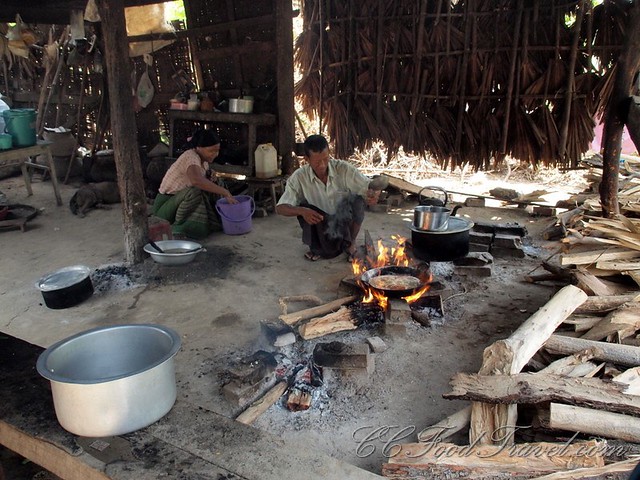 All food cooked by a wood fired kitchen.

As we approached Mandalay city, the second biggest city in Myanmar, factories and plantations began to appear on both sides of the highway. Our van dropped us 15mins from the town center. We had to catch motorcycle taxis into the town center to find lodging. Arriving mid afternoon, we were lucky to have daylight to walkabout in search of accommodation. We met a local guide named Morris or rather he met us as we walked out from a guesthouse that was fully occupied. At his suggestion, we checked into a nice looking guesthouse, Rich Queen, with newly furnished rooms equipped with rechargeable table fans, airconditioning and even flatscreen TVs. We later learned that newly furnished rooms and new interiors don’t actually give you any better comfort when you don’t have electricity. Worse of all, the electrical items here were third tier China made goods. The surge protectors in the room and main voltage regulators would often trip with intermittent power. This was annoying as either you slept sweaty in the heat, or you got up to reset the room surge protector (which was conveniently located 9ft above!) or you annoyed the manager to check the main surge protectors (on the ground floor) and fix the problem. Whichever option, no good rest for the night, you can be sure. 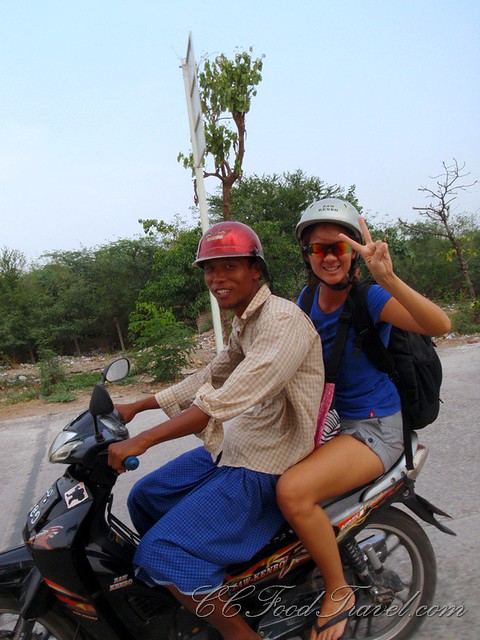 Ciki happy to have the sun on her back once more, after the 5 hour ride in that cramped van 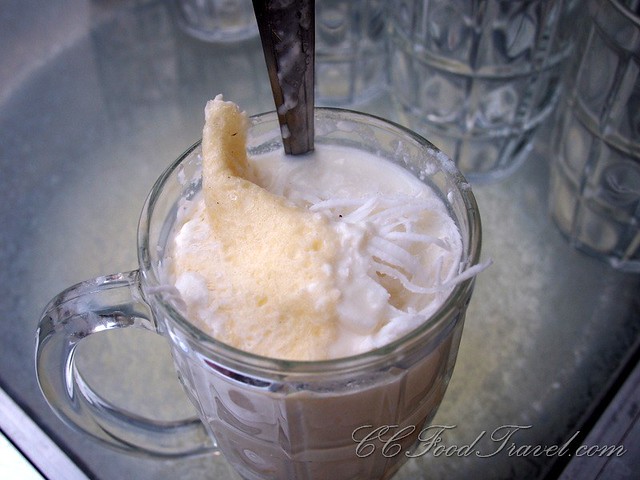 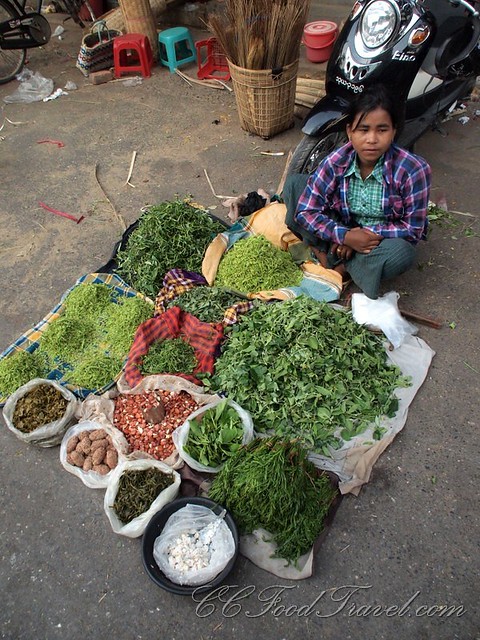 Early morning market.. we walk around looking for breakfast 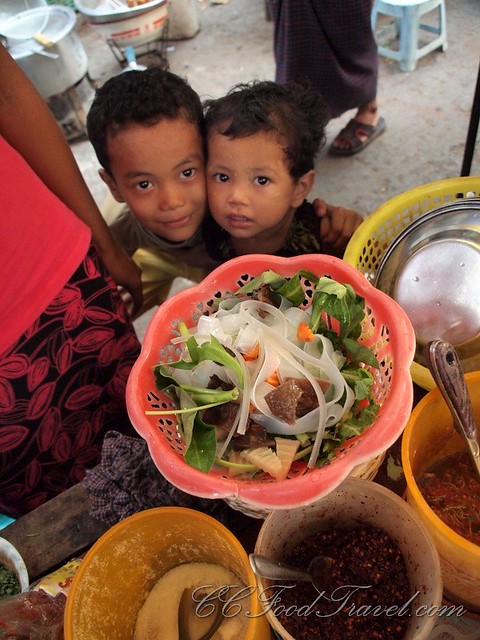 The next day, while having breakfast at a teahouse, we were approached by Soe Soe (SS), a friendly rickshaw fellow for guiding services. He had the advantage of clear, well spoken English, and he chatted to us, incessantly from behind his betelnut tainted teeth. Not perfect but good for a guy that only had primary school education and had learned most of his English and Thai from Thailand. We later learned that he had voluntarily exiled himself to Thailand for several years due to political reasons. Having worked in a large tourist environment in Thailand, he clearly understood western mannerisms, thoughts and preferences. This allowed him to carry on meaningful conversations with anyone who spoke English. Genuine, honest and with a wealth of information to share, we warmed up to him immediately. We decided to take up his services to show us around for half day, realizing that Mandalay was just too big to handle in a day.

As it was low season, we could see that securing business with travellers was tough, and as this provided people like Soe Soe with a decent income, even when most of the pay goes into the rental of equipment or loans, we felt obliged to help. When you are in Mandalay, you will probably be approached by guys like SS. Give them a chance to make conversation, judge for yourself their genuineness and if you like, maybe take up their services and share your wealth. 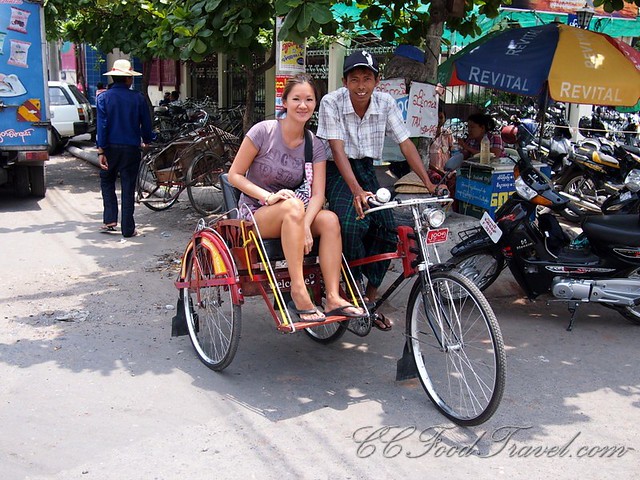 Skinny SS couldn’t have been more than 5ft 5inches and he amazingly peddled both of us over-fed monkeys to Mandalay hill’s base in the blazing heat. Upon dropping us off at the foot of the hill, he kindly requested an advancement to have his lunch and we obliged. He definitely worked hard for a good lunch. 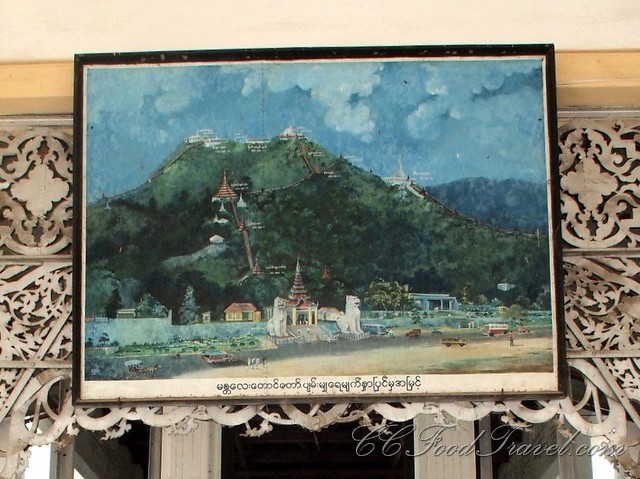 Mandalay Hill is a complete temple in itself, with numerous buddhas (and souvenir shops) peppered along the hundreds of steps, leading towards its peak. It is a bit of a touristy deal but it is still worthy of a visit. We didn’t like the fact that we needed to pay for our shoes to be stored away or even having to take them off in the first place, because as we ascended, we noticed the poor maintenance of this treasured attraction of Mandalay. The snaking shaded stairwell to the top had not been swepted or mopped for awhile, and on both sides of this stairwell, old and fresh rubbish were strewn everywhere. The view of abandoned squatter homes, dirty water reservoirs, and broken pipes detracted from the majestic views of the shrines. Not a good impression for a place of worship. 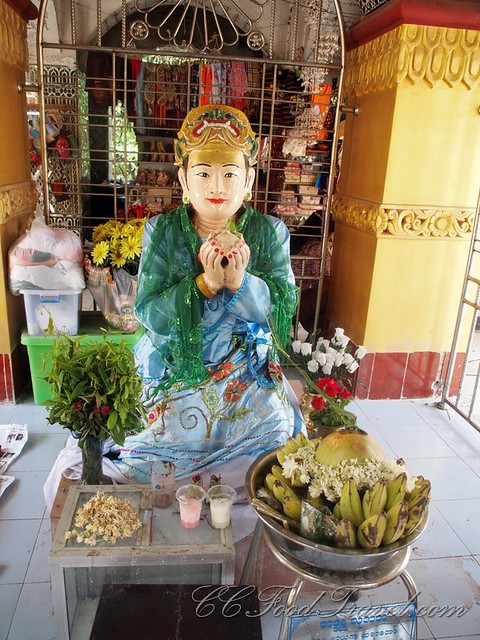 The artisan who made this sculpture is very talented. Further down this post, we also highlight the worst or maybe the laziest artisan. 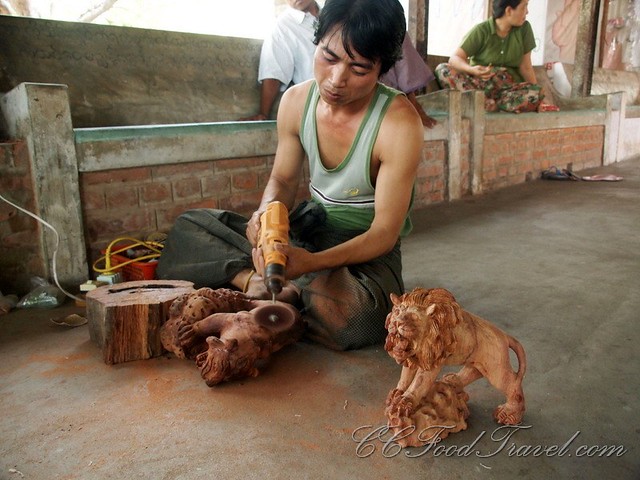 Not all souvenirs are factory made. 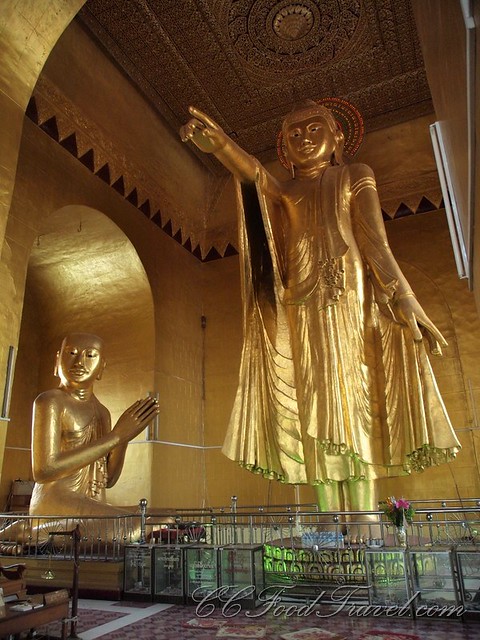 “Look at that hot chick!”

When we returned to the foot of the mountain 1.5hours later, SS had already gone to keep his trishaw and returned to pick us up in a rented 100cc scooter…