Today’s Travel Tip is on Street Food in the Philippines, and comes from my buddy Ciara, who lives in Manila. She is a proud Pinay with guts of steel and is a vicarious traveler. Here she is with her Top 10 Must-try Edibles in the Philippines!

Filipinos are fond of a lot of things. And food is perhaps the number one item, on our list of things we like to obsess about. And amongst all the types of food that we love, some really stand out. There are the Scrumptious ones, then there are the ones that are the Spicy, the ones that are Easy to prepare.. and finally, our subject matter today – The Weird ones.

Here is a compilation of my favourite dishes that are outlandish, yet delicious, unique to the Philippines.. Well, to a Pinoy’s taste buds anyway. Enjoy!

Dinuguan or Blood stew is a Filipino favourite. Being pretty popular, it has different versions in almost every region in the country. But it mainly consists of pig’s blood and internal organs (usually pork intestines, liver, stomach, etc). Most restaurants however use pork meat instead. I, myself prefer that. This dish is usually paired with steamed rice (as a viand) or for afternoon merienda, puto – a kind of rice cake.

Or mole cricket, this insect is one of a number of others considered a delicacy in the northern Luzon regions, though it’s also appreciated by some in other areas. Preparation usually starts with the removal of the legs and wings. These are then cooked either by frying (deep or not), sautéing with some onions & garlic, or roasting. Great for merienda (snacks)! Crunch… crunch… crunch…

This is something I really haven’t tried. Not that I am willing to either. Haha.. Soup no. 5 or Soup # 5 (whichever!) is cow’s balls soup and is usually available in carinderias (local eateries). This is popular among men as it’s believed to make men more man-ful… like Viagra. Hah.

This literally translates to frog(s) found in the rice fields. Some Filipinos enjoy these amphibians either stuffed (with veggies and/or pork meat) or simply fried. And true to what they say, frogs do taste like chicken!

Some things are eaten raw, just like sushi. That’s a given fact. But forget raw. These worms are definitely not for the faint-hearted… for these are eaten alive. Found hidden in some driftwoods are woodworms or tamilok. Andrew Zimmern (of Bizarre Foods) tried this when his show visited Palawan. 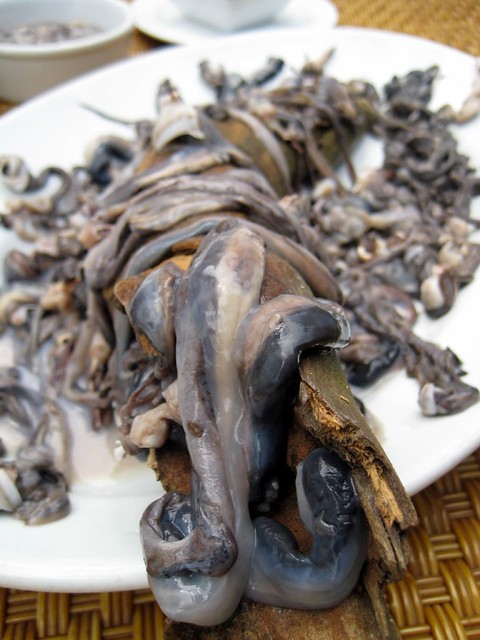 To obtain sasing or sandworms from seashores, one has to be skilled and very stealthy. A second of delay is opportunity lost as these worms can hide very very fast… deeper into the sand.

Both worms are prepared or eaten almost the same way. After extraction, the woodworm is cleaned and popped into one’s open mouth. The sandworm requires a bit more cleaning. First, it’s folded into two. The folded middle section is then bitten into followed by a flick of the wrist, to get rid of the sandy insides. And it’s ready to eat! A dip in some spicy vinegar is another way of enjoying these. More flavor… to cover up the worm’s taste, even just a little (for me, anyway).

And More… Street Food
Street foods are vastly popular. And each country has its own to boast… from hotdogs, to noodles, to insects, to eggs, and so on. Here’s some of what we Pinoys love.

This is dried blood cut into bite-size squares resembling a Betamax player (know what that is?), thus deriving its name. It can either be chicken’s or pork’s blood though the latter is more preferred and more popular than the former. Once dried (or hardened), these are skewered on bamboo sticks, grilled and dunked into your preferred dip.

Skewered chicken intestine that come in a variety of sizes on the streets of Manila and the rest of the Philippines. Either cooked barbecue-style or fried, isaw is one of, if not the most popular among the skewered street foods in the country. Popular to the extent that it is being sold and made available in some restaurants and mall food courts.

And I’m not talking about shoes here. You see, Filipinos have a fondness for creative names and chicken feet. The latter are made available in most restaurants and prepared in a dozen different ways. What makes adidas distinctive is that these are chicken feet on a stick, grilled and are available only on the streets.

Chicken eggs. Duck eggs. Quail eggs. Three of the known varieties of kwek-kwek. Besides karaoke and texting, Filipinos are also very in love with eggs. Obviously. But these eggs are no ordinary eggs. Boiled and coated with flour (with some orange food color) and deep-fried, kwek-kweks are widely sold both on the streets and in malls. Some like to have it with sweet-and-sour sauce or sweet-and-spicy sauce. I, one of the many, love it (especially the quail ones) dipped (actually soaked, for me) in spicy vinegar.

OK, so I guess the list is 10.. plus one! I hesitate to write the 11th as it is not for the faint hearted.. The BALUT is a fertilized duck embryo that’s boiled alive and eaten in the shell. Popularly believed to be an aphrodisiac and considered a high-protein, hearty snack, balut are mostly sold by street vendors in the regions where they are available..

This food-for-the-adventurous is sold on the streets just when the sun sets. You’d hear peddlers hollering “Baluuuut…..” Boiled duck egg with an extra kick. A surprise chick inside. The perfect balut is said to be 17 days old, with the chick just at the right size, beak yet indistinct and still featherless.

How to eat it? With your balut in hand, determine which end is hollow by lightly tapping it (though the narrower end usually is the spot). Give it a harder tap to crack and break off the shell, making a small hole on the egg. Sprinkle some salt and/or spicy vinegar (depends on you) on the broth and sip it. Once done, continue peeling off the egg shell… enjoy the firm yet tender yolk and the harder egg white… and of course, save the best for last… the flavourful chick!

There are a lot more weird edible stuff that different Filipinos scattered among the 7,107 islands of the Philippines enjoy… And it would be too much to include everything in here. So, I’ll leave the rest to you guys.

What exotic things have you tried in the Philippines? Or in the countries that you’ve visited? Care to share?

ciaRaysabeL is an aspiring runner, a photographer wannabe, and a blogger hopeful who loves books, food and culture, couchsurfing, people and places, living green, sunny days and buko shakes, and orange backpacks. A proud Pinay and a vicarious traveler at the moment, she fills her spare time with Spanish books and Japanese mangas, helping out and making a difference, writing and chocolate milkshakes while trying to put a period on her university degree. She also loves playing tour guide and showing new-found friends around Manila while planning to see the world soon, one country at a time.

With the launch of guEST by the BIG group, comes a fantastic Bordeaux Wine dinner, which we were really looking forward to.. Just last…