See this little Indonesian warung below?

Well, Cumi stumbled upon it during his walkabout with the M.Zuiko f1.8 and f2.0 lens review last year. He decided to return to this food shack with me in tow since he wanted a change of cuisine. The surroundings are a little dark and dank, as it is after all, a wet market by day, however the food turned out to be really good – we tried the Bakso Noodles, the Nasi Ayam Penyet, Ikan Goreng and the Grilled Satay, all of which really hit the spot. To bad there was no Gudeg, the traditional food from Central Java and Yogyakarta, otherwise we would have tried that too.

Although the place can look a little unsavory to some, we actually felt right at home as the people were friendly and chatted with us about where we were from. They noticed or cameras and asked us all kinds of questions, curious about our escapades. Hailing for Java timur, the proprietor asked us about our Javanese travels and especially about Jakarta, Borobudor, Jogjakarta and Bandung. He also wanted to know if his food tasted better than the Javanese version. It did actually, because it tasted stronger – I think he has adapted his cooking to suit the Malaysian palate.

The restaurant itself is narrow, so instead of round tables, it has long tables and benches (kind of like a school canteen) which is inviting for people wanting to grab a quick late night drink, dinner or both. This is one of our new neighborhood favorites! 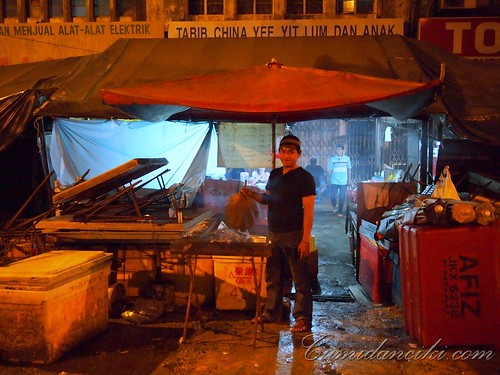 strike a pose at the Indonesian Warung.. the satay man can ! 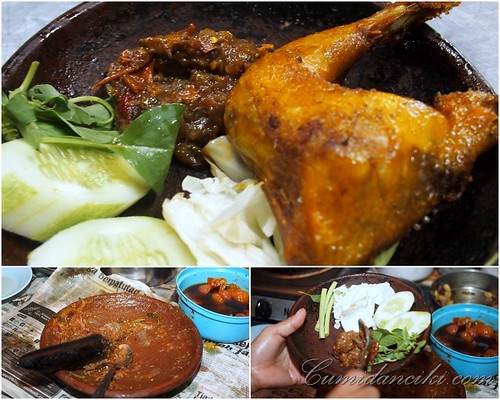 Ayam Penyet is a fried chicken, lightly smashed using a pestle in a mortar laced with sambal. It is one of the popular foods in Indonesia, especially in East of Java. It was introduced by local footstall (warung) in the street, then finally it got more popular and now it’s on the main menu of every Indonesian restaurants. The most well-known Ayam Penyet in Surabaya is Ayam Penyet Peneleh according to the proprietor. 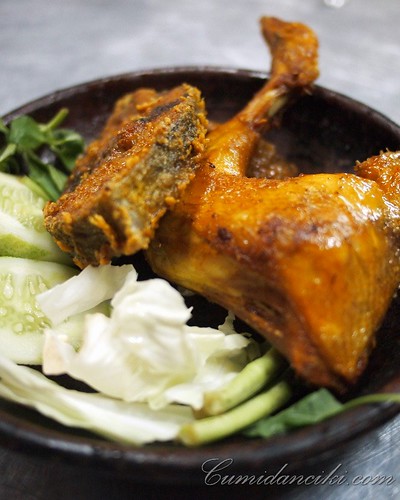 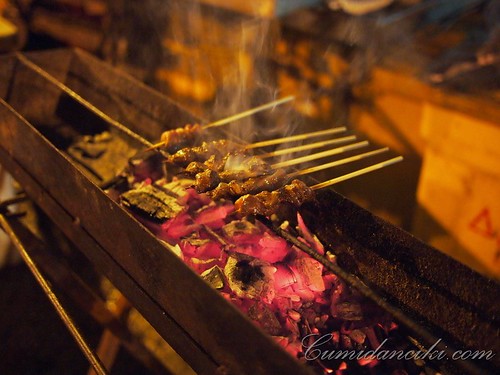 Of course satay is universally loved across Southeast Asia. It’s commonly believed that satay is the region’s distant cousin to the Middle-Eastern kebabs, thanks to the spice route and the culinary influence of the early Arab traders. However each country has their own interpretation for satay, influenced by their own unique food culture and distinct palate. 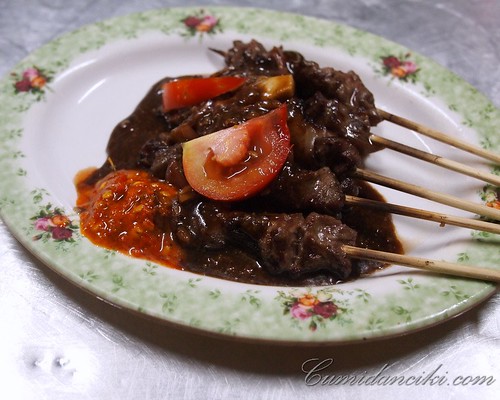 For instance, Indonesian satay tend to be sweeter because of kicap manis (sweet soy sauce) while the Thai satay is slightly less sweet since coconut milk is used instead. The Indonesian satay at this Pudu Warung is served with both a kicap manis as well as a really spicy red chilli sauce. It has a numbing effect on the lips and tongue that you won’t soon forget. We tried the mutton satay and it was really gamy and strong smelling. Good thing the kicap manis masked the taste. 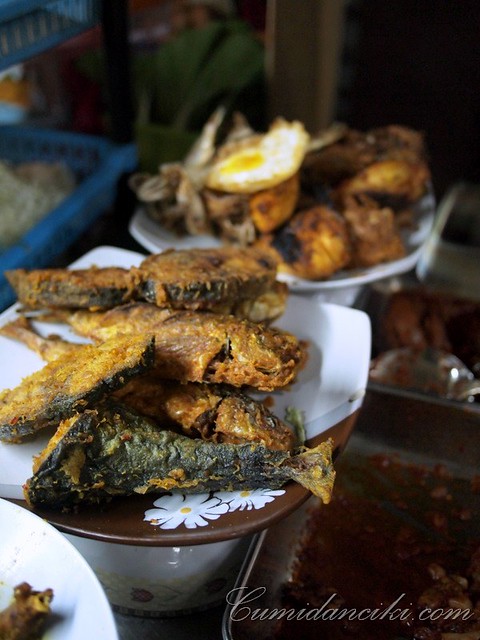 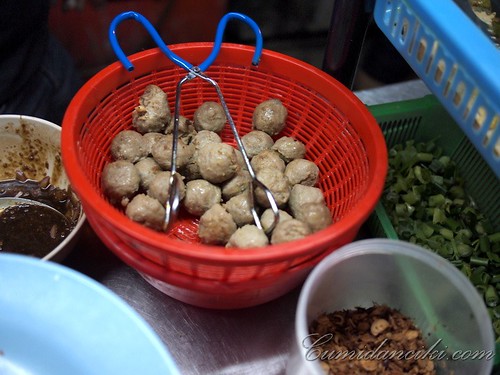 meatballs for the bakso 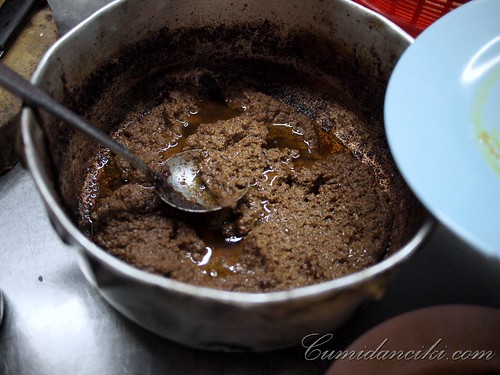 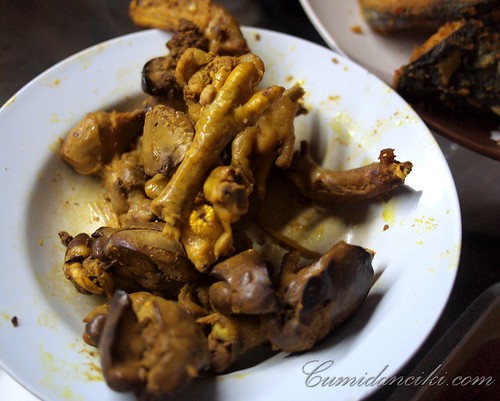 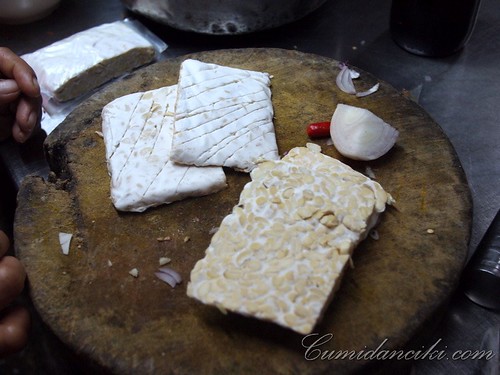 Tempeh (pronounced tem pay) is a traditional Indonesian food. This chunky, tender cake of soybeans is consumed daily in Indonesia, usually with rice as part of the main meal, or sometimes by itself as a snack. In Indonesia, tempeh-making is a household art that varies somewhat from home to home. Whole soybeans are usually mixed with a grain such as rice or millet. A “starter”- usually a piece of tempeh from a previous batch – is added to begin the fermentation process.

In traditional home-based tempeh-making, the mixture is wrapped in banana leaves and left to ferment for 18 to 24 hours. In Western tempeh factories, commercial starters are used to produce tempeh, and the fermentation process takes place under carefully controlled conditions. Whatever process is used, the result is a cake of soybeans with a rich flavor sometimes described as smoky or nutty. The flavor also has been compared to that of mushrooms. This is really healthy and a must try for all you health freaks out there;) 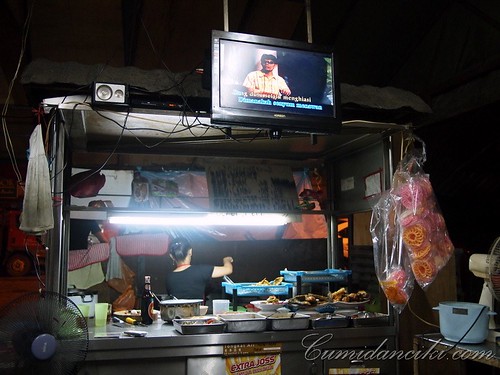 Above the stall, a flatscreen displays the best dangdut karaoke tunes. We would have preferred the acoustic guitar player present in the last visit who strummed and belted out popular Indonesian rock tunes. 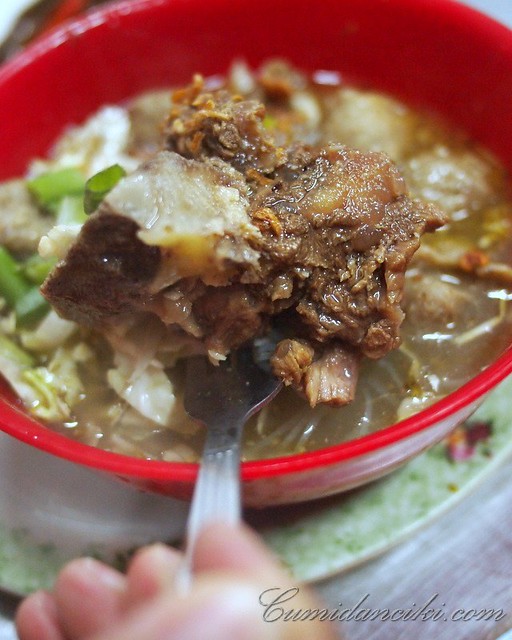 check out the huge ‘tulang’ (ox tail) in our bakso 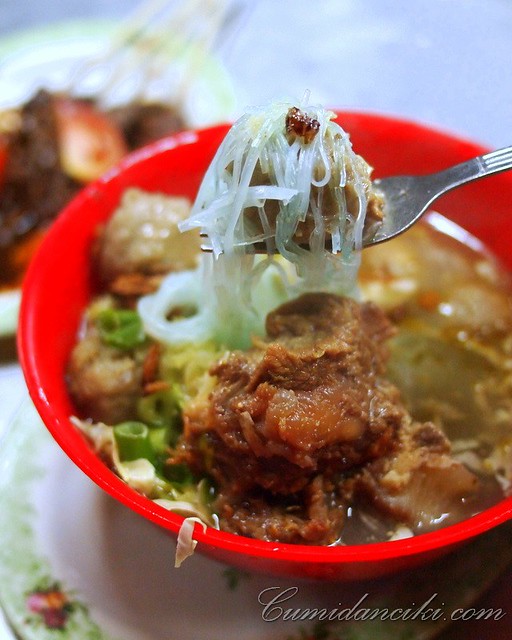 Bakso or baso is Indonesian meatball or meat paste made from beef surimi and is similar in texture to the Chinese beef ball, fish ball, or pork ball. It also has a quantity of tapioca flour, that’s why it’s so smooth and a little slimy. The bakso here is delicious – served in a bowl of beef broth, with blue tinged bihun noodles (rice vermicelli), salted vegetables, tofu, tulang, Chinese green cabbage, bean sprout, sprinkled with fried shallots and spring onions.

Bakso can be found all across Indonesia; from the traveling cart street vendors to restaurants. Slices of bakso are also used and mixed as compliments in mi goreng, nasi goreng, or cap cai recipes. Unlike other meatball recipes, bakso has a consistent firm, dense, homogeneous texture due to the polymerization of myosin in the beef surimi. If done right, it’s the perfect comfort food. The soup is divine! 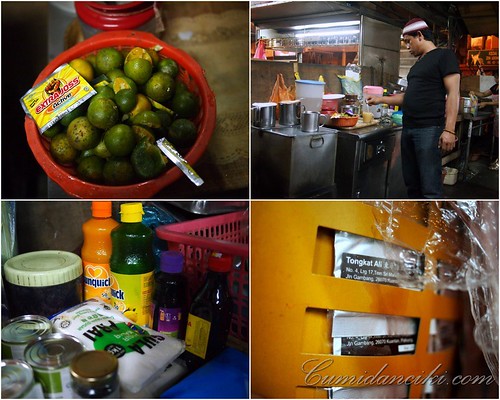 the proprietor looks and me and says.. “untuk lelaki”

“Then it’ll put hair on your chest and make you stand in places you’re not supposed to.”

Hmmmm, I guess he was talking about the Tongkat Ali. Fine, so Cumi gets to drink it.. not me!

The warung is open 24hours if you have the craving NOT for McD.

One of the really cool places in the city now for Sunday brunch, is located at the WOLO Hotel in, downtown Kuala Lumpur. Mr….