Me and Malé weren’t always friends. I often misspelled Malé with Mali. I would mistake Malé for being the capital of Mauritius when rightfully it should have been the capital of Maldives. Blame it on my poor sense of geography or my ignorance of a small country of islands somewhere in the Indian Ocean. You see, I haven’t been good to Malé. It wasn’t that I didn’t know about Maldives. It just wasn’t on my radar.

Five years ago, I met Xian when he first visited Malaysia together with his team of air traffic controllers. They were in Malaysia and Singapore for courses related to their profession. For some of them it was their first time to Malaysia and probably first time out of Maldives (Oops..). They were an eager bunch wanting to explore a tropical rainforest land which also happened to be one of Maldive’s largest trading partners. They wanted to go into a jungle, hike up a hill, raft down a river and go to a fast food joint – things which they had only seen on satellite television. Nevermind the costs involved, they just wanted to experience things they weren’t sure they’d get the chance to experience again, once they walked back into the departure hall. They wanted to do anything except eat fish (including sushi), curry, rice, coconut, ride a boat, or see the beach. They succeeded in pursuing their adventures in Malaysia and I had the opportunity to join them on their exploration. Needless to say, they had fun here and so did I, with them. 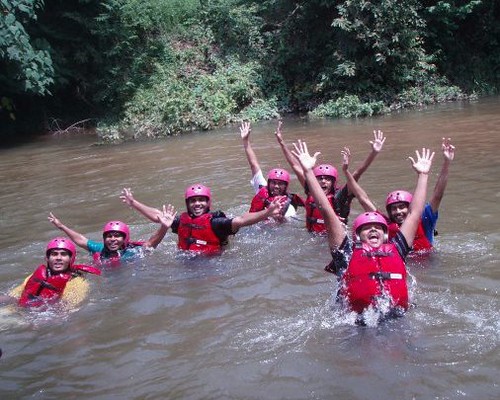 Amongst them and in no particular order.. Xian, Hamid, Dhonu, Tata, Afshal, Shaheen

My first impression of Maldivians were that they were a very shy bunch. The shyness came – I assumed – from their concern on how others looked at them. It wasn’t that they didn’t speak English. It’s their second language. It wasn’t that Malaysia didn’t welcome Muslims. Islam is the national religion. It wasn’t that Malaysia was a country of deep religious fanatics or a country of terrorist groups breeding. Hey, we’re pretty safe just like any country not plagued with civil unrest. You could point out that I had been a stranger to them and they rightfully should be weary of me. I found out later that besides being weary of me, they were concerned about creating the right impression. They were polite. They were well groomed. They smiled a lot. Xian was their senior in age and rank – he was their unofficial leader and planner. They were collective in their thoughts and decisions. They were a united lot. Their unity could have stemmed from the close living proximity due to the limited livable land and space in their nation. Their happiness and desire to enjoy the best, could have been the result of knowing at the back of their minds about scientific projections, that predicted that their country might sink in the near future. Their moto was to live now to the fullest, because they would not know, what might happen tomorrow. 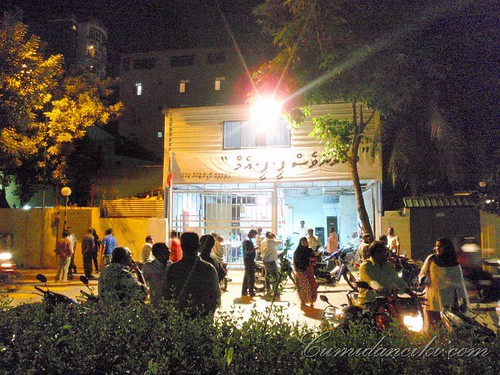 Crowd outside a political party office in Malé

Xian and his motley crew opened my eyes to their world. It’s easier for them to imagine living in a large country than for me to picture living in a crowded populace within a living area less than 5 square kilometers surrounded by the sea. Malé people also reside in many surrounding islands in crowded homes. What is a public bus ride for us is their boat taxis. Xian shared that his family and parents, making up 7 persons, live in an apartment that’s less than 1000 square feet. So crowded is Malé that there is a constant hive of activities in the city even after working hours. Its inhabitants just can’t hangout at home to watch a movie or to have some peace. People go out to play football, have tea, play chess and window shop. There are no alcoholic bars because a Maldivians Islamic religion prohibits alcoholic consumption although some of them might drink when the opportunity comes. There aren’t any cinemas because there isn’t a large enough populace to meet the cinema’s bottom line. As an alternative, satellite television provide the dream-scape for those that can afford it. 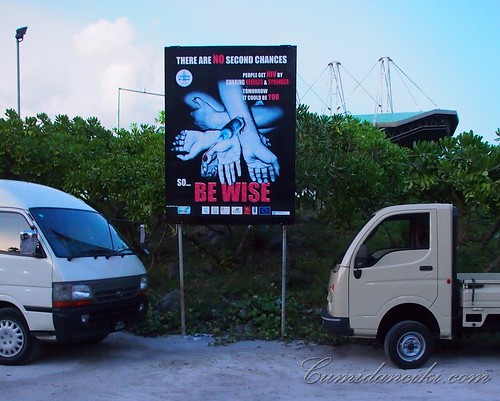 Apparently there are drug fueled rave parties at uninhabited islands plaguing the authorities. You can’t snuff the rebellious teen spirit, even with religion.

Xian and the group once shared with me that there wasn’t anything else to do in Maldives except the sip cocktails, lookout into the great wide ocean, and do some water sports. They were absolutely right. Maldives is a rest and relax haven, and a deep sea fishing, and scuba diving majesty, as I had finally a first hand experience on a recent trip. I once told them I didn’t think I’d ever make it to Maldives because the mentioned activities were never of big interest to me. They replied that if I ever did visit, they would show me the other parts of Maldives which they were sure I would love. So when I was finally in their ‘waters’, Xian and a few of them put together a short itinerary for our group to visit the flight control tower and see a little bit of the rest of Malé before I departed from their country in the vast Indian Ocean. 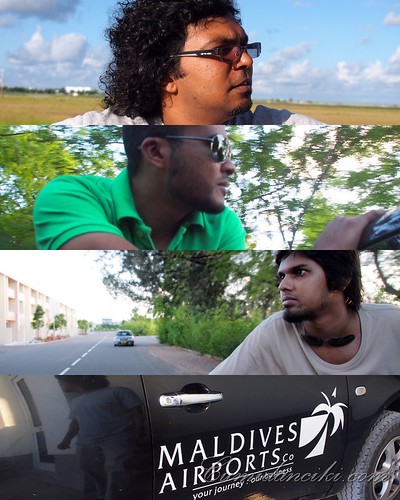 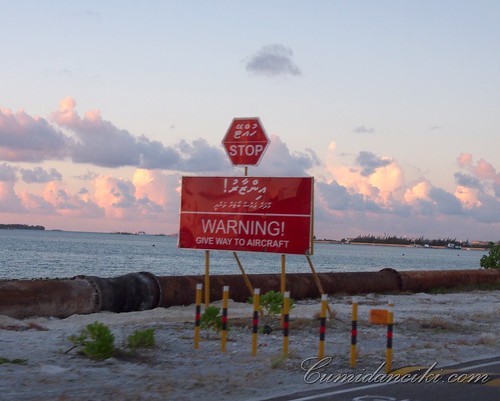 Always give way to planes! 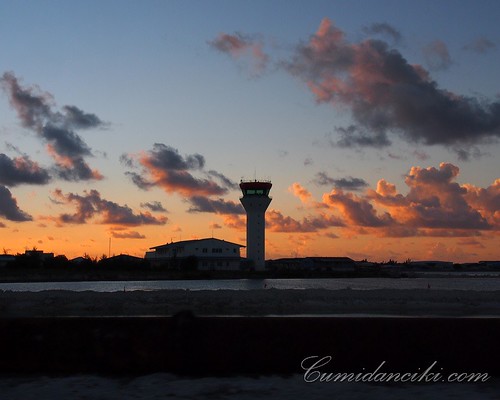 We were on the way to the airport control tower. This picture obviously taken much later. 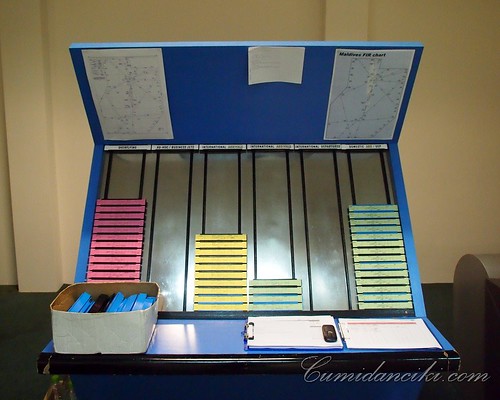 Manual operations from the past requiring excellent mathematical skills to calculate the routes. 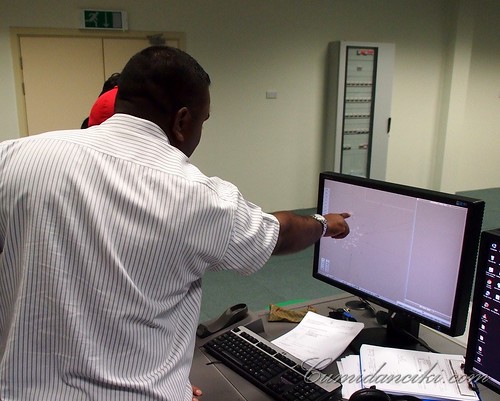 Modern operations and convenience with computers. No more manual calculations. I imagine you could even play Spider Solitaire and check out Facebook as well! 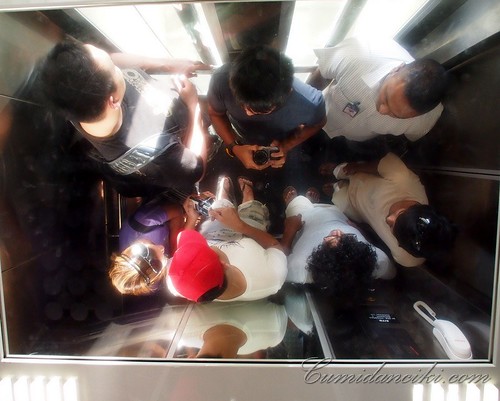 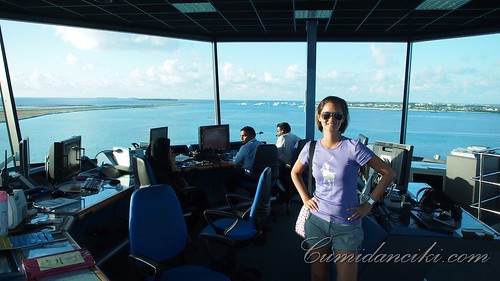 We make it up to the airport control tower with 360 view. Polo Ciki always well dressed for the occasion. 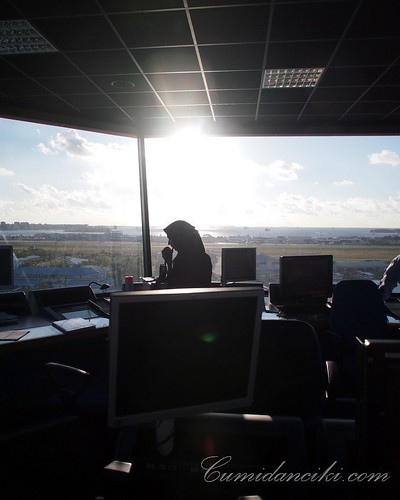 A lady in control. 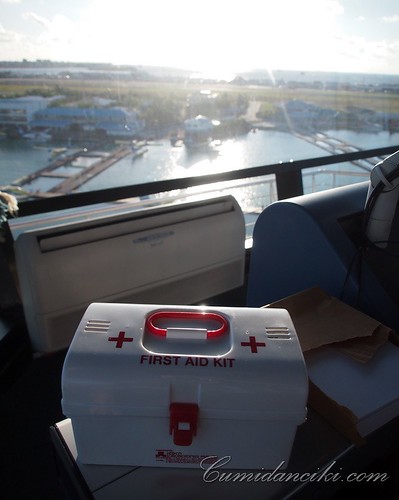 In case of disaster, a first aid kit is available. 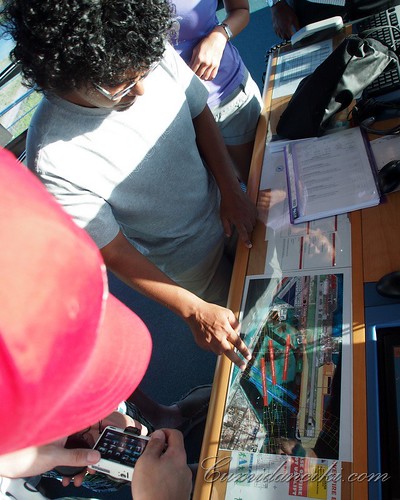 Xian showing us the flight path.

We continued our tour with a cruise into the new district of Hulumalé. 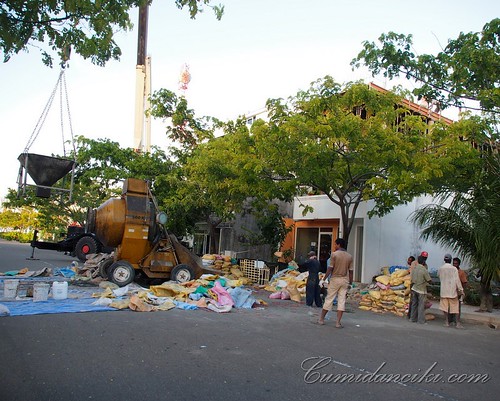 Construction of a new place to stay. Things are a moving here in busy Malé.

More living spaces are being made available with reclaimed land. The residents have a new government that is making big changes. 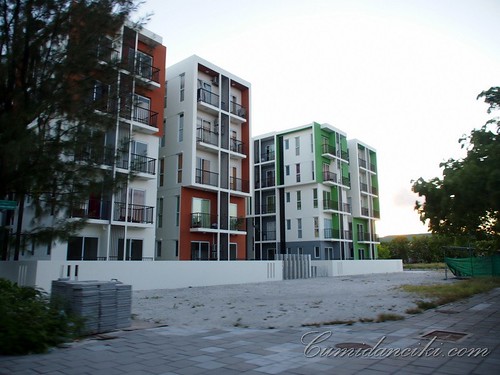 Bigger and better things to come in Hulumalé. 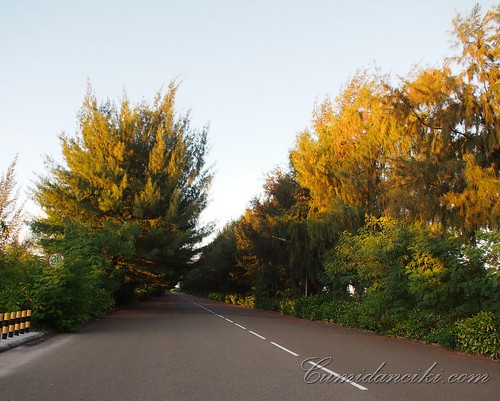 The streets are wider and plenty more space for all. 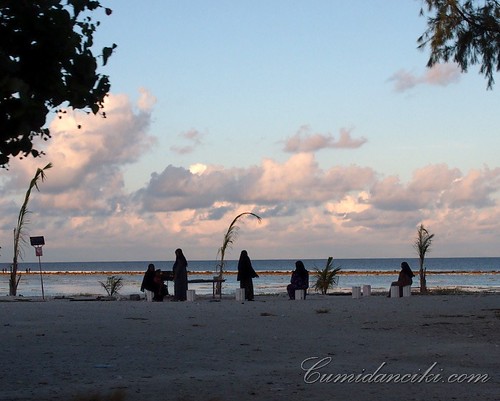 A beach for residents 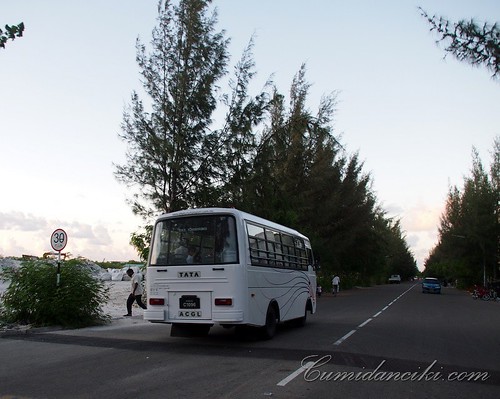 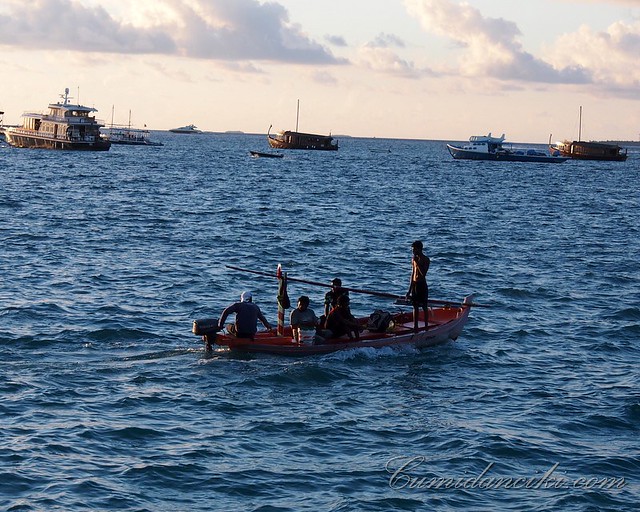 We watch fishermen returning home after selling their day’s catch. 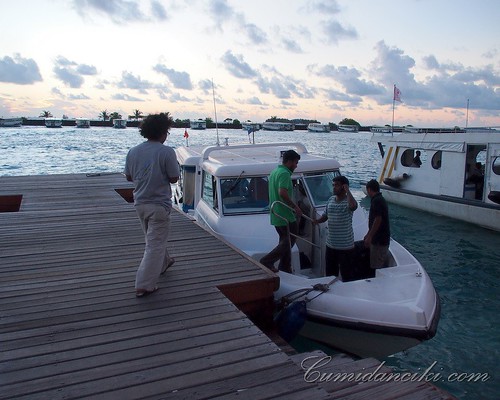 We headed to Malé on speedboat. 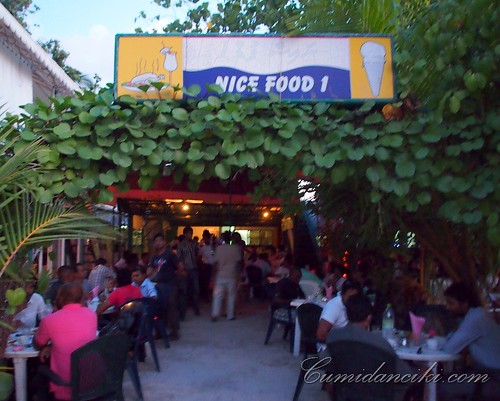 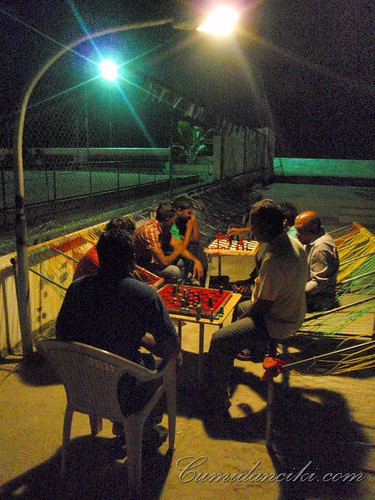 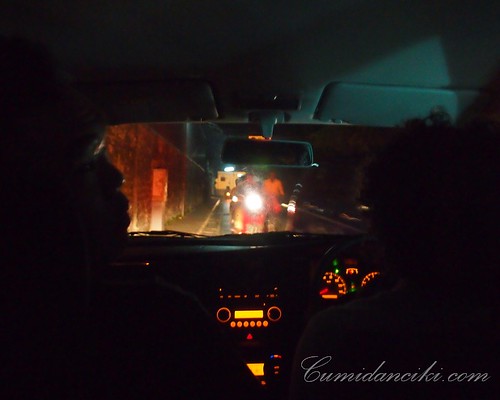 After our ‘short eats’, we jumped into Xian’s brother’s Suzuki compact, cruising the small streets of Malé in our final minutes for a city tour – against traffic too. There isn’t much space in Malé but residents still dream of owning a car.

With only 20 minutes to spare for flight check-in and we still needed to catch the boat taxi back to airport, Ciki who is always a stickler for punctuality, looks at me with great discomfort. We drive fast but there is heavy traffic. At the pier, we miss the express boat. Ciki looks even more worried but luckily, there was the slow boat/dhoni, that we managed to catch and she was a little more relieved, but still kept giving me the evil eye. The boat disembarks, we reach the airport jetty and rush to the check-in counter. Ciki finally heaves a sigh a relief. We made it.

Given more time, I would have liked to visit more islands inhabited only by locals.

The kindness of strangers is rare. Even more difficult is letting our defenses down to receive a stranger, or to help one. We are always weary of strangers and their motives. Desperation to attain success and wealth leads many to unscrupulous means. We have all fallen for some kind of confidence trick, at least once in our lives. It is much more convenient to build a wall to shield ourselves from being waylaid. Better to be safe than sorry, the saying goes. When you travel you sometimes meet the oddest strangers, and under even stranger circumstances. Be it a good or bad outcome, it still provides a great story to tell. The experience of crossing paths with Xian and his gang years ago in Malaysia, was certainly a blessed one. They reinforced within me the faith that there are genuinely kind, thoughtful and wonderful souls in the unlikeliest of places, and it is for me and you to discover them and continue to extend the goodwill of mankind.

Malé and me weren’t always friends but today we are more than friends. Thanks for the memories. I will return one day to a more modern Malé but I will always remember the one I first walked on. 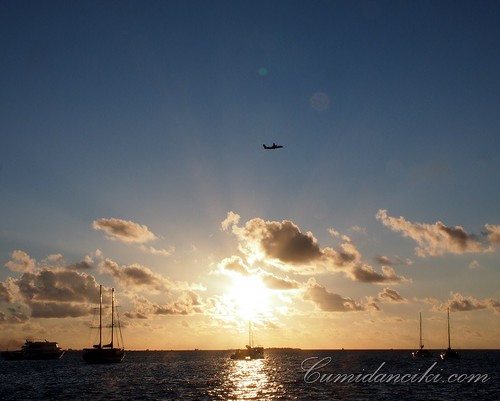 If you find this post fascinating and would like to know more about Malé and the Maldives, here are some of our other posts:

2. Chef in the Spotlight, Chef Sven Cepon of the Sheraton Maldives, Part 1

5. 13 Reasons the stay at the W Resort and Spa, Maldives

Peter Pork Noodle. The day after Mowgli (a.k.a. my husband, a.k.a Cumi) emerged from the Sarawakian jungle, unscathed and uneaten by ‘Kaa’… the famished…