Ramadan at the Sheraton Imperial Kuala Lumpur Hotel, is a colourful affair. This year’s theme is Essence of Melaka and it will showcase Melaka-born Chef Jamsari bin Mohammad’s childhood memories of delicious cuisines.

Influenced by cuisine from a young age, Chef Jamsari has his grandfather to thank for, for where he is today. He grew up assisting his grandfather, who cooks at various kenduris in the kampong. Mostly for wedding celebrations, his grandfather’s specialities include daging masak hitam, rendang, nasi minyak, nasi briyani and others. His other happiest memory when it comes to food is when his mother used to cook for him and his siblings. Acar rempah and chicken curry never fail to remind him of his hometown, Jasin. When he is not cooking up a storm in the Sheraton Imperial Malay Kitchen, he relaxes by fishing with friends around the many fishing spots in Malaysia. 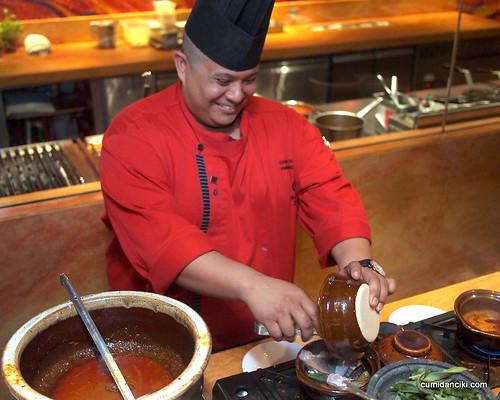 What can I say? Walking around and checking out the spread at Essence, you might feel a little overwhelmed by the delicious aromas of food cooked on the spot over blazing flames. Chef Jamsari and his team (Chef Kabir and Chef Kamaruddin), are behind the counters, dishing out Baba Nyonya cuisines which consists of Chinese, Portugese, Dutch, Indian, British, and Malay influences. Also known as Peranakan cuisine, the main ingredient in many dishes would mainly consist of Belacan which is a Malay variety of shrimp paste. Samples of Peranakan dishes on the buka puasa buffet are Nyonya Chap Chia, Pongteh Chicken, Nyonya Duck Curry, Black Pepper Crab, Pajeri Nenas Peranakan, Nyonya Kari Kepala Ikan Merah, Ikan Jenahak Masak Tauchu and nany more. 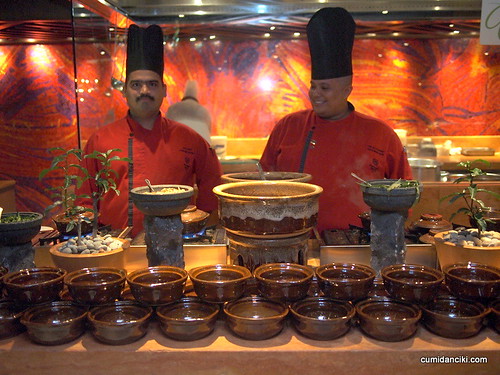 From traditional recipes passed from generations to generations to colourful live action stations. Assam pedas is a dish close to Chef Jamsari’s heart as he believes this is the dish Melaka is best known for. Be prepared to take on a spicy gastronomical journey when you stop by this stall. Two types of assam pedas sauces, with distinctive tangy fragrant of tamarind will assault your senses. In addition to the usual assam pedas sauce, there will be the Assam Pedas Daging Tetel sauce – which is a true Melakan recipe. Each night, Chef Jamsari will prepare a variety of assam pedas dishes showcasing 5 or 6 types of fish, beef, prawns, crabs and a variety of vegetables. 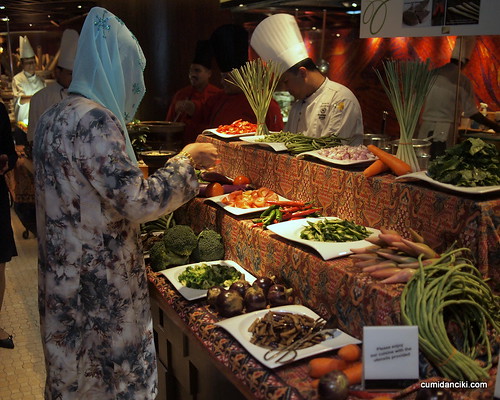 vegetable counter for the asam pedas 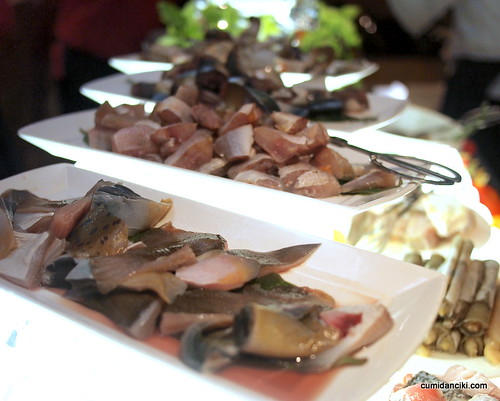 fish and seafood for the asam pedas 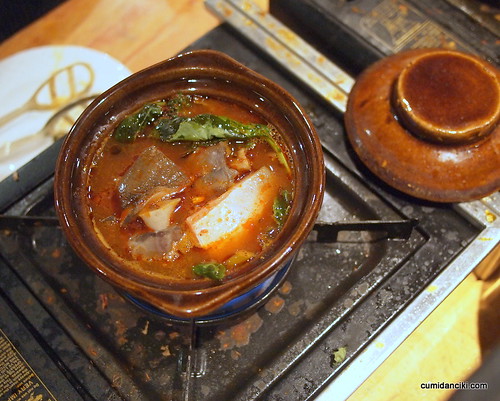 Chef Jamsari cooks the asam pedas on the spot 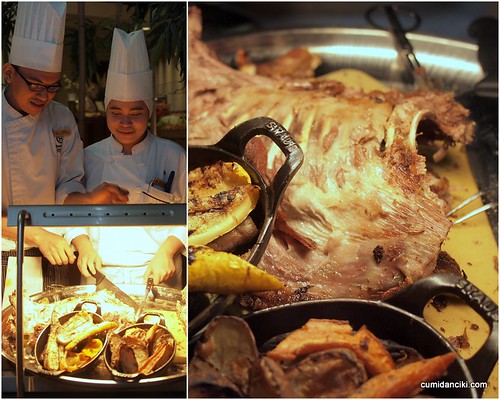 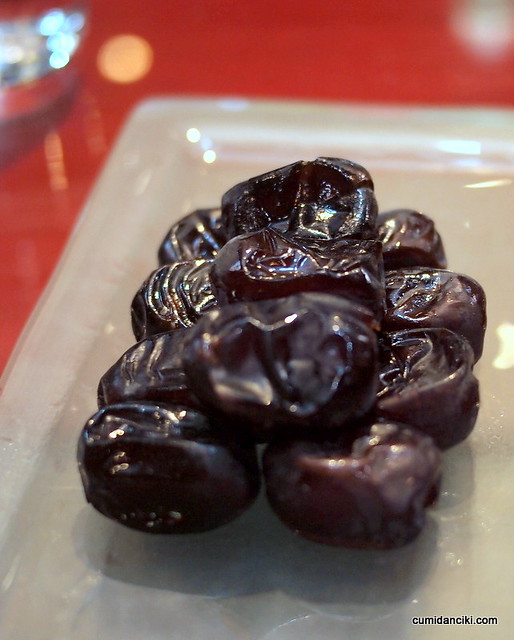 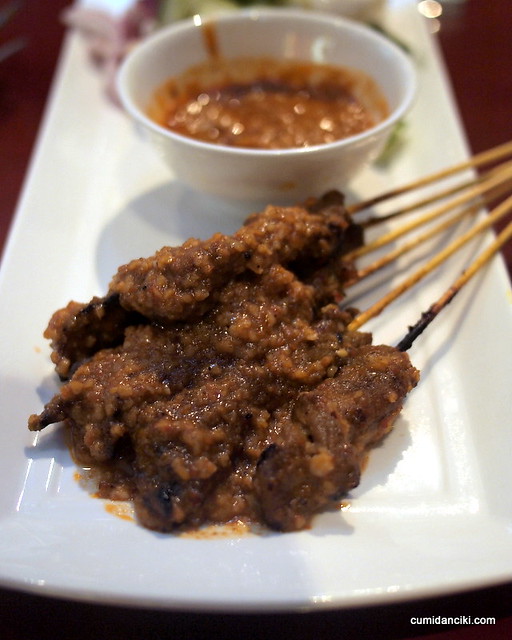 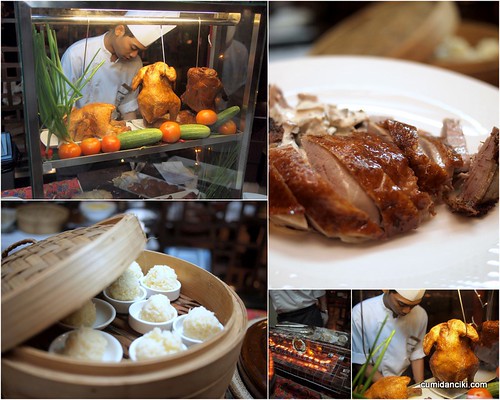 For those who are craving non-traditional fare, there are also other specials on the buffet tables like Steamed New Zealand Mussel with Ginger, Chili, Saffron and Lime, a selection of Sushi, Sashimi and California Hand Rolls, Creamy Mushroom Soup, Steamed Dory with Lemon, Mango and Tomato Duxelle Salsa, and many more. 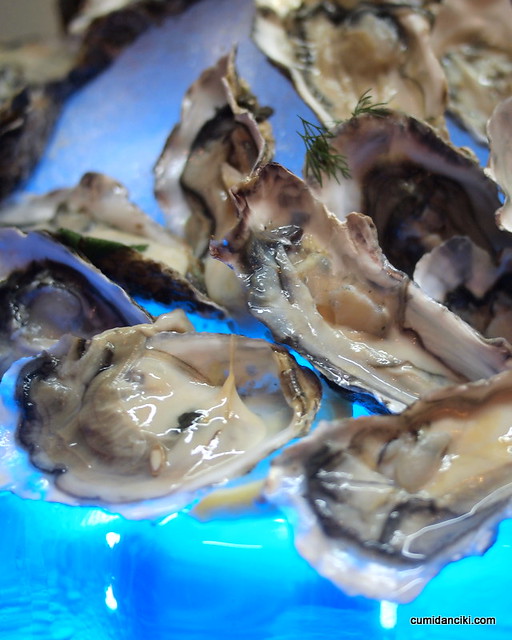 And if that is not enough to whet your appetite, there are a couple of fun-filled action stations, whipping up Roti Canai, Murtabak, Roti John, Ikan Bakar that are worth checking out. Chef Jamsari recommended we try the Roti Canai with his assam pedas sauce, and it really worked well together.

Over at the drinks station, you can quench your thirst with a wide range of beverages such as the traditional Teh ‘Tarik, Nescafe Tarik, Sirap Bandung and other selections of juices and cordials. You should also check out the Hang Tuah’s Well where delicious coconut juices and concoctions will be served. 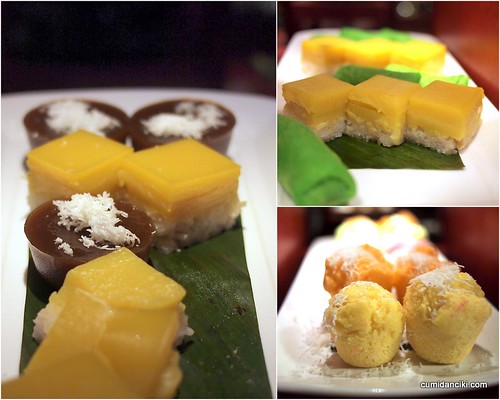 The buffet is priced at RM108.00++ per person and is available for dinner only from August 3, 2011 till August 27, 2011. I also heard that there is a fabulous promotion that you might want to take advantage of – Sheraton will be giving away two complimentary seats for every 10 paying guests. There will also be nightly lucky draws and slices of date cakes for diners to take home. 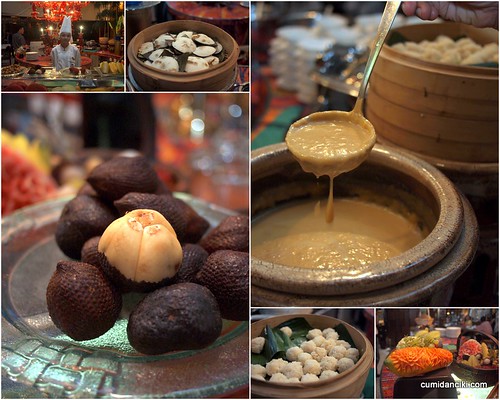 Well, what are you waiting for? Treat yourself and your loved ones to a special and memorable ‘buka puasa’ gathering now!

For Reservations:
Essence Restaurant, Sheraton Imperial Kuala Lumpur Hotel. Call 03 2717 9933 or email to [email protected] to make a booking. For real time reservations, visit www.eatdrinkandmore.com/sheratonimperialkualalumpur. For those who would like to buka puasa in the comfort of their homes or in more exclusive venues, the hotel also extends similar menus for outside catering or in its various function rooms. For company gatherings or private get-togethers, call the Catering team at 03 2717 9900.

Barbecue is its own world, moving to unalterable rhythms and primordial fumes. Unfortunately, here in Kuala Lumpur, the whole BBQ culture is missing. Unlike…