It happens to be October month, and it’s obviously the time for lots of beer drinking and snacking, for those familiar with Oktoberfest (who isn’t though, right?).

This beer festival of large mugged beer, food, music, toasting, singing, dancing, games and buxom barmaids which originated from Munich, Germany, has now become a staple celebration across many countries around the globe during the month of October. The beer companies and bars obviously had something to do with the spread of this German culture which has its roots in the celebrations of a royal wedding, in 1810, between the Bavarian Crown Prince Ludwig and the Saxon-Hildburghausen Princess Therese. 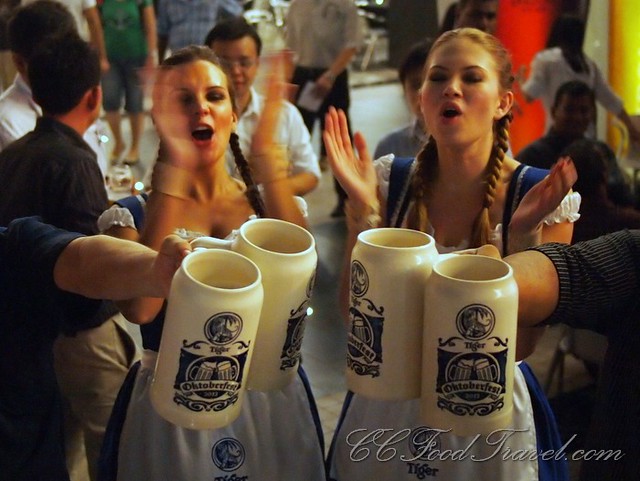 In Malaysia, it is therefore no surprise that the beer company, GAB, launched its Oktoberfest campaign at Publika’s The Social recently. Alcohol beverage consumption in Malaysia has always been an expensive event due to the high sin taxes imposed, unlike our regional neighbours, where a thirsty drinker can enjoy lots of refreshing fizz at an affordable rate. Hence, whenever there is such a promotion for this sort of sinful refreshments, the drinkers flock to the bars like mothers to discounted baby diapers. The GAB Oktoberfest campaign kicks off a month long promotion of beer at any GAB outlet in town. Big or medium, tall or small, massive or dainty beer drinkers can all participate in games and take home these sexy-looking… 1 liter ceramic mugs for free, with any purchase of 1 liter of beer. Not only that, there is a high probability of meeting some of these lovely frauleins who will clap and cheer you on as you chug down beers like a Bavarian champ in lederhosens, or maybe console you as you hurl like a college kid.

Having arrived stylishly late just in time for the last 30 minutes of the celebrations, I had missed most of the fanfare behind the launch, including the food, the music, the games, the glitterati, and all the media attention. Feeling dejected and lonely, I walked over to a burly unshaven bartender with a gleam in his eye and a tight V-neck t-shirt. He noticed my sad face, was about to leap over the counter to offer me a hug, but I instead pointed to the taps before him and he nodded in understanding looking like a wise alcoholic sage.. He knew that I had to drown my deep remorse, in what little time I had, with the remaining free-flow of Heineken, Kilkenny, Strongbow, Paulaner, Tiger and Guinness… not all at once, but almost. It was a temporary fix but a joyous one albeit missing the attention of the pretty barmaids who were cheering on several college-looking kids in a drink off, nearby. 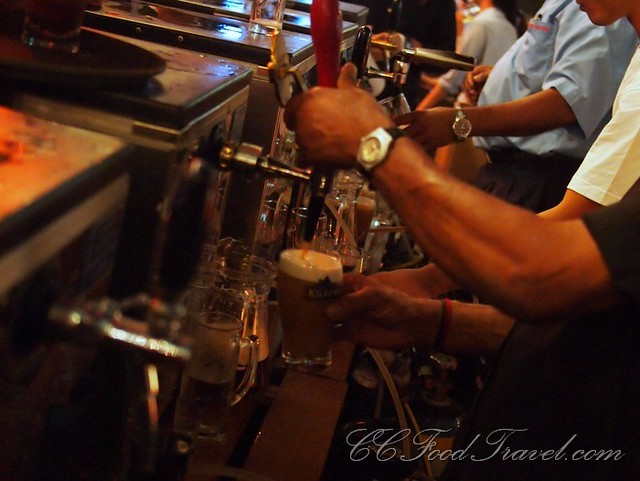 It’s not too late for you to celebrate any occasion at all, which you can think of (for example, the birth of kittens from your neighborhood promiscuous cat) when you have Oktoberfest promotions at your fingertips. Hop, skip, jump or do all three (but not all at once), over to your favourite bar to enjoy the specials. Or, if your office computer has internet and no firewall blocks, check out GAB’s Biermeister on Facebook where you can win freebies and more exciting prizes from 17 September – 31 October 2012. Log on to GAB’s Oktoberfest Facebook page www.facebook.com/OktoberfestMY to check it out. 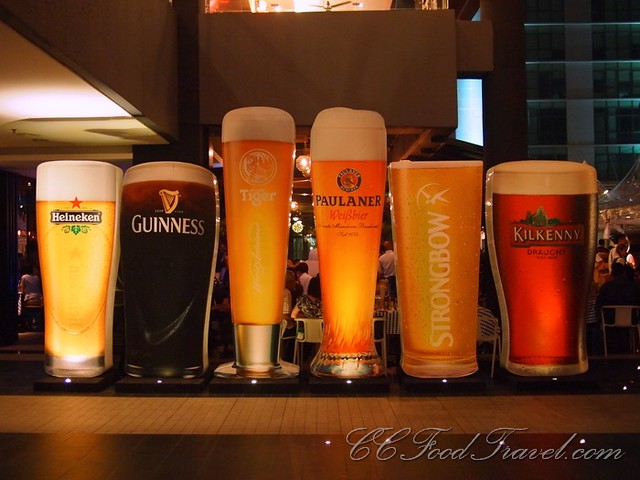 Objects may be larger than they appear when its Oktoberfest

I stopped at my 11th bottle and stumbled walked back to my car lugging my 2 ceramic trophies. Again, without the attention of the pretty barmaids.

So here we are, outside of Millesime, waiting of a wine tasting event to begin. This particular event would be unlike any other and…