With Moroccan lanterns throwing intricate patterns on the wall and colorful furniture straight out of the convoluted streets of Marrakesh, vibrant Min Fes is served with an authentic side of great middle eastern fare. At Min Fes, diners can lounge on a cushy pillows amid a simple, cosy setting and pick at Middle Eastern tapas or suck on a tasty olive while waiting for the mains to arrive. 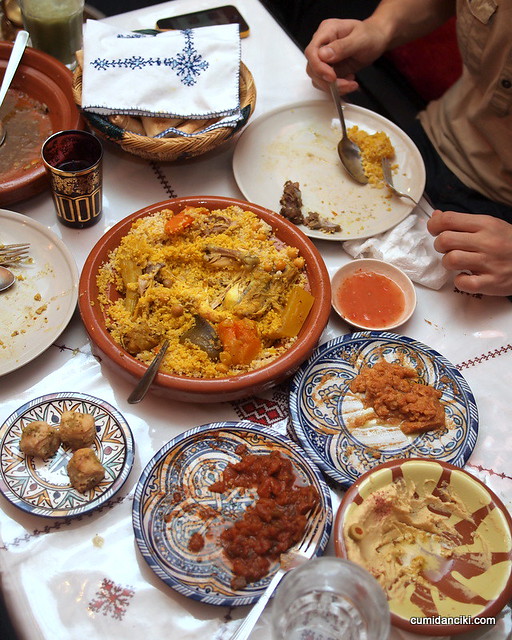 Devoid of the usual fanfare and atmospherics, this terrific Moroccan restaurant focuses on the food, i.e. succulent tagines and fluffy couscous instead of exotic décor and shimmying entertainment. Even so, it would take an especially nubile belly dancer to distract us from their intoxicatingly aromatic chicken couscous, or their fragrant lamb tagine, its meat as soft as the plump apricots it’s cooked with. The discerning congregate here for strong coffee and honey-steeped pastries, and mint tea.

I am told that if you’re offered a mint tea by a local, you are supposed to linger over it and enjoy it. Mint tea is the hallmark of Moroccan hospitality, and it’s impolite to refuse. A sit-down tea session takes about half an hour to an hour, with lots of chitchat in between.. here we have it with our dinner instead. It taste light and refreshing. We noticed that the sweetened mint tea that comes with every meal is served in a special way. It is brewed in a brass teapot and served in small glasses. When the tea is poured, the pot is held high above the glasses to let air mix with the tea. This improves the flavour of the mint tea.

Moroccan cuisine is extremely diverse, thanks to Morocco’s interaction with other cultures and nations over the centuries. Moroccan cuisine has been subject to Berber, Moorish, Mediterranean, and Arab influences. Five more native products that are especially important in Moroccan cooking are lemons, olives, figs, dates, and almonds. Beef is not plentiful, so meals are usually built around lamb or poultry. 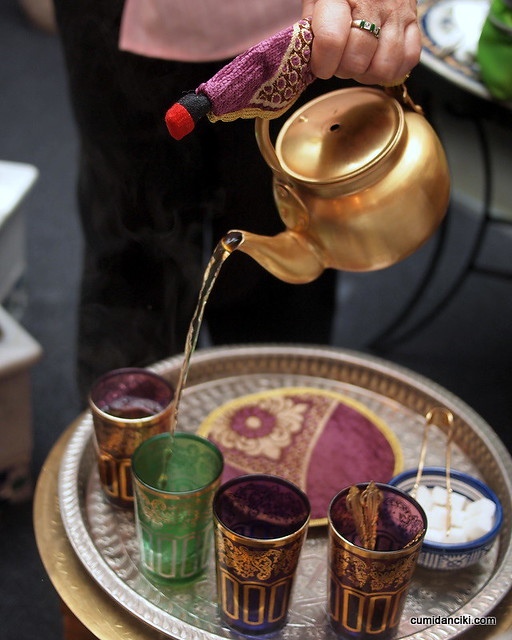 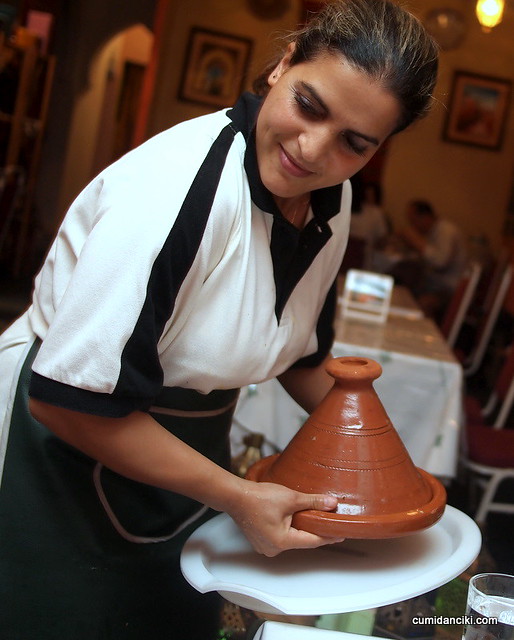 The Moroccan national dish is the tagine/tajine, a lamb or poultry stew

The tajine’s name is taken from the distinctive earthenware dish with a cone-shaped top in which it is cooked and served. 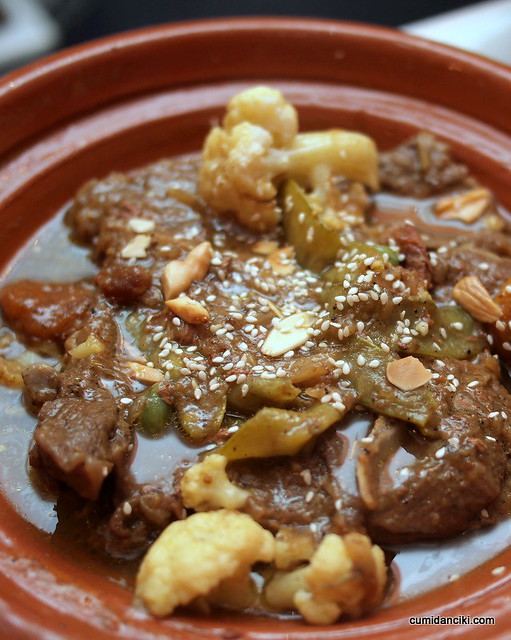 The tagine, like other Moroccan dishes, is known for its distinctive flavoring, which comes from spices including saffron, cumin, coriander, cinnamon, ginger, and ground red pepper

This was the highlight of my dinner! The Lamb Tagine had all sorts of surprises in it – preserved lemon confit, saffron, and oh, the fabulous bursts of flavour from the apricots and raisins. Tender, melt in your mouth lamb does not begin to describe the texture. We especially loved the sprinkling of chopped almonds and the soft cauliflower that came in the rich, dark, meaty gravy. 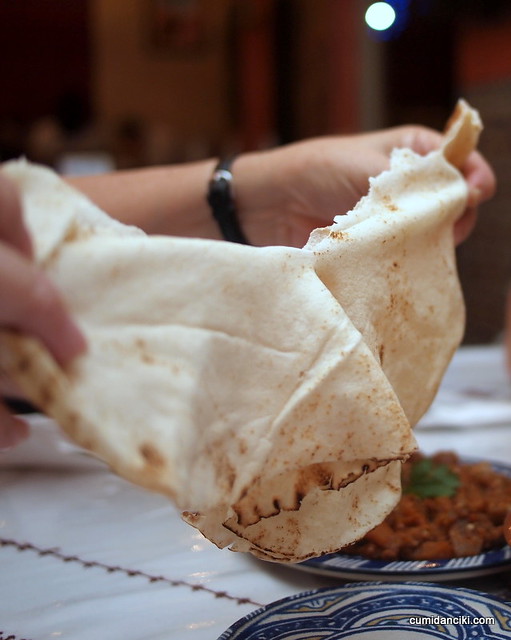 The test of a destination’s culinary credentials is bread. Flat, round Moroccan bread is eaten at every meal 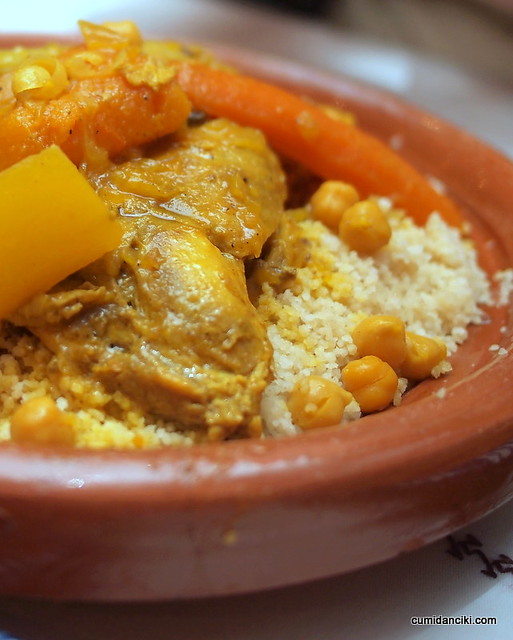 Couscous, another national dish of Morocco, is made of small-grain semolina pasta, typically combined with saffron, spices, nuts and raisins and served with flavorful stews 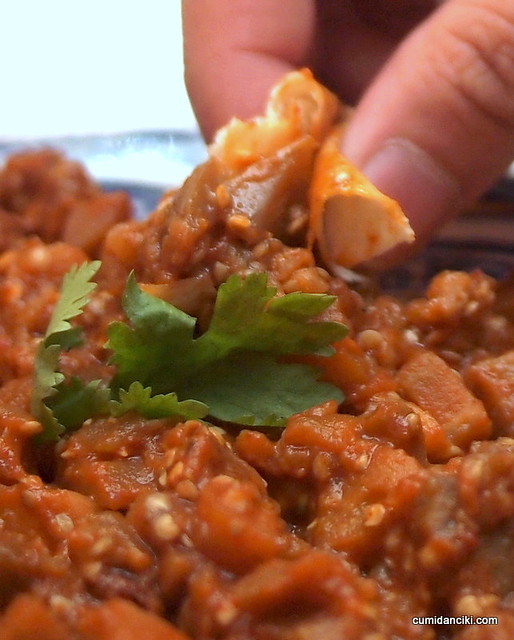 Zaalouk is a delicious cooked salad made with eggplant (aubergines), tomatoes, garlic, olive oil and spices. It’s a common side dish to many meals, and is usually served as a dip with crusty bread. 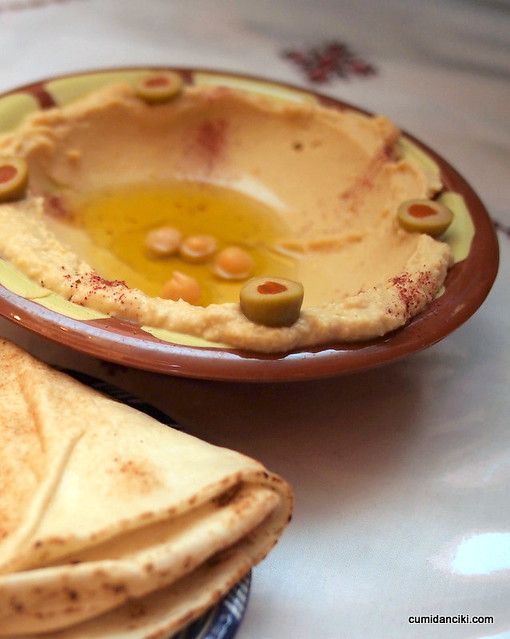 Hummus is a dip or spread made from cooked, mashed chickpeas, blended with tahini, olive oil, lemon juice, salt and garlic

Hummus is incredibly healthy because the chickpeas are a good source of protein, potassium and fiber. 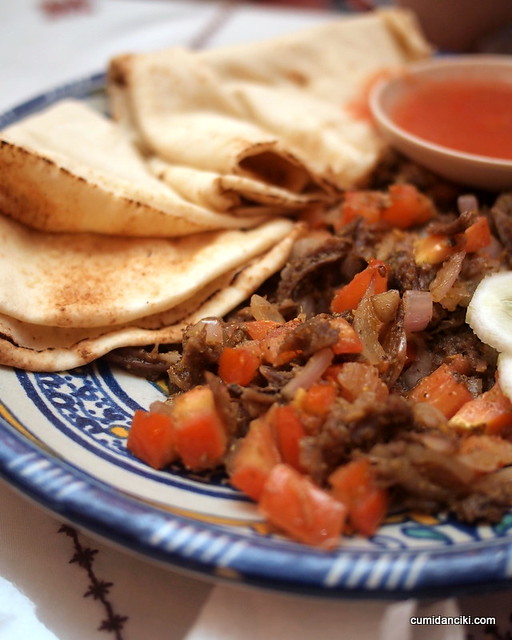 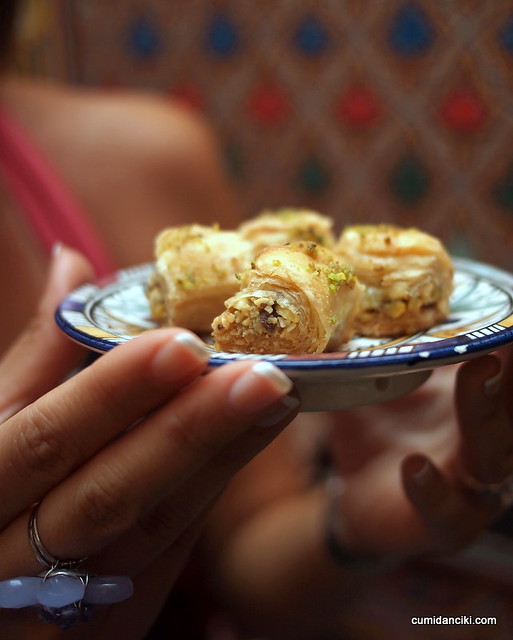 Baklava – a rich, sweet pastry made of layers of filo pastry filled with chopped nuts and sweetened with syrup or honey

The first thing served was the lamb aukdah – a real winner. Eating this with your hands and moping up the shredded meat with your bread, I found this dish superbly tasty and well seasoned. Starters of hummus, and the zaalouk went great with the flat round bread as well. On to the mains of chicken couscous which turned out to be phenomenally delicious. The meat of the chicken was as soft as the carrots, celery and pumpkin that it had been cooked in. The couscous was fluffy and light – a must order dish! Finally, the dish I loved the most – the lamb tagine, cooked in a tagine, after its namesake, was also textbook tender and apricots, raisins heightened the flavour. Finish all this off with honey sweet and nutty baklava and tell yourself this meal was definitely worth the workout tomorrow!

Finally, dining here at Min Fes will not burn a hole in your pocket. The entire feast only set us back around RM40 per head. What a fine place to dine! 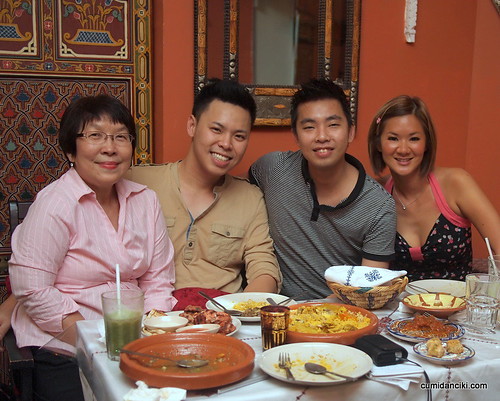 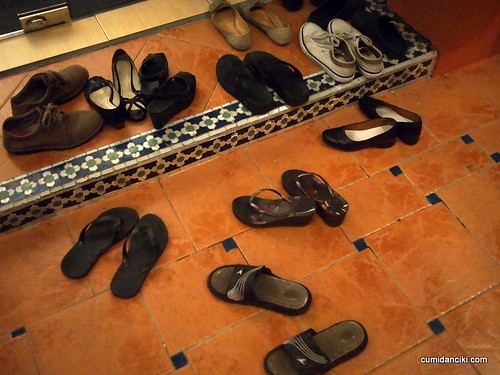 leave your shoes at the door.. 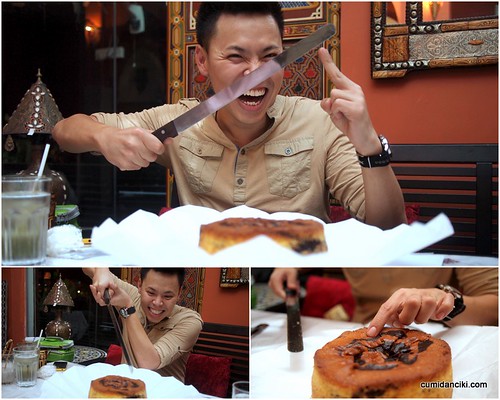 We used this opportunity to celebrate A lil Fat Monkey’s birthday with him.. here he is with some serious knife action going on..