In Cumi & Ciki’s endless quest for good Chicken rice, we followed the trail to a place in Petaling Jaya. Pak Cham Kai is of course the Chinese way of saying Hainanese chicken or non-roasted chicken. 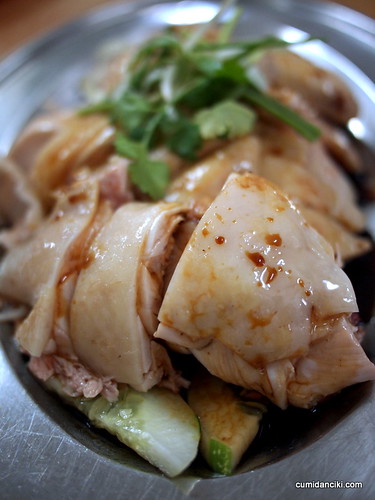 When a lil fat monkey told me about this find, at first I was a little dubious. Hesitant. How many people claim they know the BEST chicken rice in town? Almost as many who claim they know the best Hokkien noodles.. Every time I venture somewhere to try someone’s best chicken rice, the chicken turns out dry or bony, or not flavoursome or just down-right inedible and full of fat. Anyway heading down to put the Monkey’s claim to the test.. we wondered to ourselves.. good or bad? .. please let it be good.

Ah, did you know that to gauge how good the cook is, one should order the smooth, white chicken(in Malaysia, if you see a really fair chick walking on the road, we call her “Pak Cham Kai” .. you see what I am saying..? ) Pak Cham Kai a.k.a. boiled chicken, as opposed to its brown counterpart, the roasted chicken. The boiled chicken says more about the quality of the meat and hides less because it cannot conceal anything behind its non-roasted skin. In the roast chicken, the flavour can often be in the skin and not the meat.

I loved boiled chicken that is prepared in the traditional Hainanese method which involves the boiling of the entire chicken in meat and chicken bone stock, reusing the broth over and over and only topping it up with water when needed, in accordance with the Chinese way of creating master stocks! In coffee shops you can see them bathing the chicken in this white, murky bath and imagine the flavours going into it. Wow.. are you excited now? 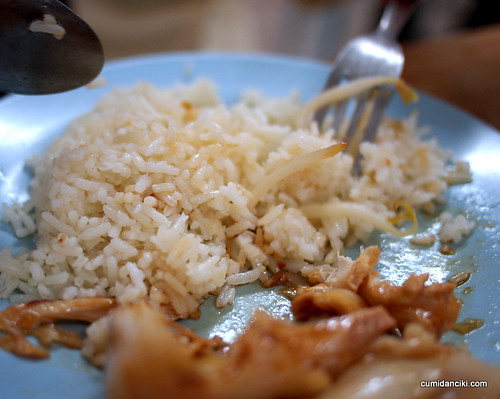 Then the chicken rice, all yellow and fluffy and oily, is in itself another work of art. This lard rice involves the preparation of a chicken stock created specifically for that purpose (slow shallow frying of fats and bits of the chicken amongst other things), producing an oily, flavourful rice sometimes known as “oily rice”. A lil fat monkey has said that some chicken rice are made so well you don’t need no chicken! Just eat the rice with some black sauce that’s it! Hmmmm.. I think I would still like mine with chicken, thanks;) 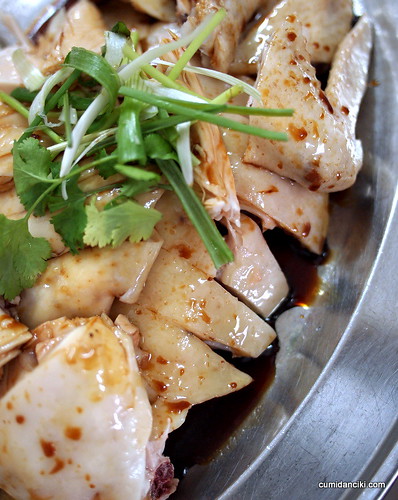 Verdict:
The white, smooth skin.. the taut, sweet flesh .. the succulence of the meat, even of the harder parts like the breast meat, says that this is indeed an excellent version of the Pak Cham Kai for us, for now! This place seriously tops “Ipoh Comes to PJ” in terms of the chicken. The chicken rice was not bad but not the best we have had- very light and less oily than other shops. Some might argue not flavoursome enough nor lardy enough but we liked it. For health reasons of course.

A lil Fat Monkey was right. Great Chicken rice Shop. And if you are wondering what the name of this shop is.. it is called Tasty Chicken Rice in Kota Damansara. Enjoy.. and Happy Malaysia Day!

We are really excited about this movie we watched over the weekend! Let the Right One In (Låt den rätte komma in – in…