Why do the Chinese eat with chopsticks? 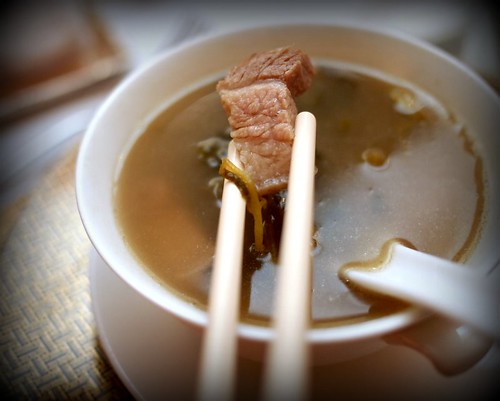 Generally believed to have originated in ancient China, chopsticks are most commonly made of bamboo or plastic, but are also made of metal, bone and various types of wood. The pair of sticks is maneuvered in one hand, between the thumb and fingers, and used to pick up pieces of food. It is considered bad luck should the chopsticks cross while you use them so be sure to pick up your food without the sticks crossing or overlapping each other! 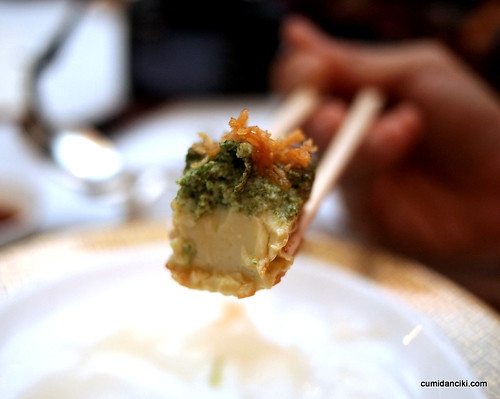 Chopsticks originated in ancient China as early as the Shang dynasty. The earliest evidence of a pair of chopsticks made out of bronze was excavated from the Ruins of Yin near Anyang, Henan, dated roughly 1200 B.C.

While China, Japan, Korea and Vietnam have long included chopsticks as part of their traditional eating utensils, the mass use of chopsticks spread to other Asian countries in recent centuries with the influx of Chinese immigrants in Southeast Asia. 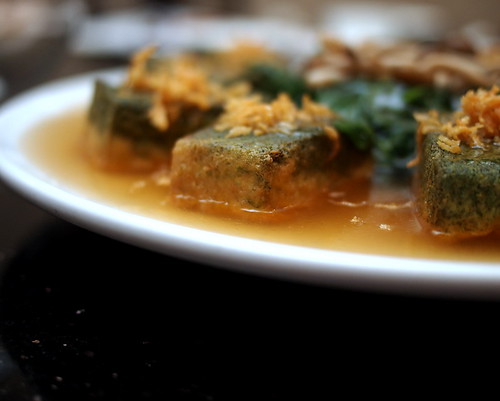 I personally like using chopsticks at Chinese dinners because it looks less clumsy when you are gunning for that small morsel of food on a larger communal  platter. It is  swift, precise and much more discrete this way..  In and out with the chopsticks, before someone can say.. whaaa-t? where did the juiciest prawn go.. 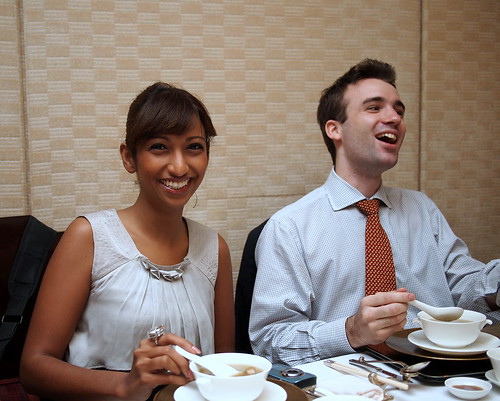 Anyway, thanks to Lyla of Il Lido, we were invited via Marian (our makan/feasting fairy godmother) to dinner at Liyen of the Ritz Carlton where we could practice our chopstick skills all night long.  The usual posse at the dinner were Fatboybakes and wifey, the gorgeous Aly (photo above) A Lil Fat Monkey, obviously our demure Makan Fairy Godmother, Marian, Boolicious of Masak-masak, and our host for the night,the magnanimous Oliver (next to Aly), PR Executive of Ritz Carlton. 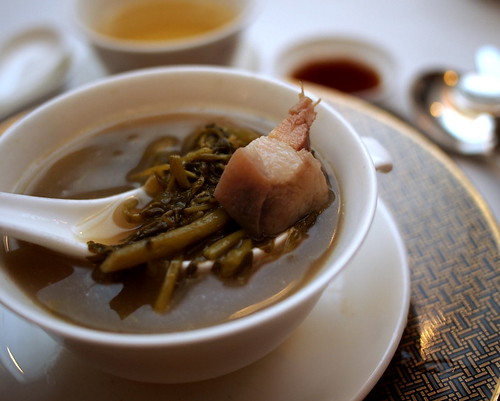 I love the simplicity of watercress and pork rib soup. It’s great for clearing heat in the body and sputum in the lungs. In western countries the watercress is eaten as a salad but in Chinese soup, it transforms the dish into comfort food! Employ chopsticks to help devour the lovely slow boiled bits in your piping hot soup and know that the world is a better place for it. 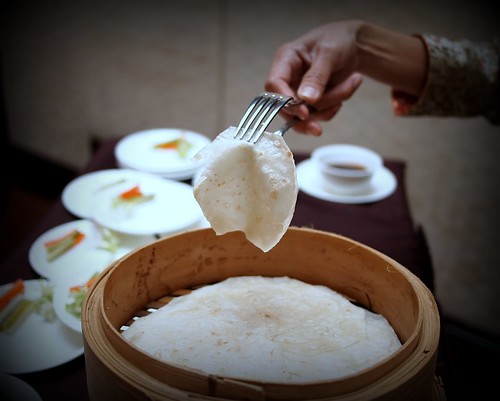 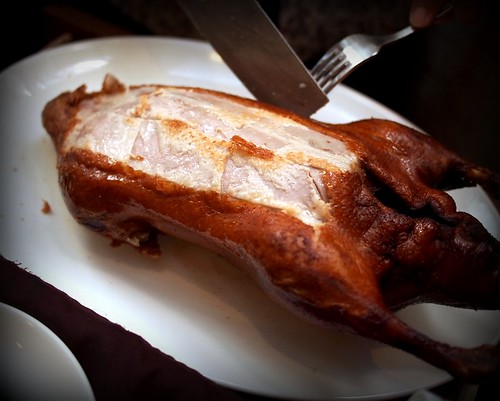 Peking Duck, or Peking Roast Duck is a famous duck dish from Beijing that has been prepared since the imperial era, and is now considered one of China’s national foods. The dish is prized for the thin, crispy skin, with authentic versions of the dish serving mostly the skin and little meat, sliced in front of the diners by the cook. Ducks bred specially for the dish are slaughtered after 65 days and seasoned before being roasted in a closed or hung oven! Wow, now you know why the taste is so awesome!

The meat is often eaten with pancakes, spring onions, and hoisin sauce or sweet bean sauce. 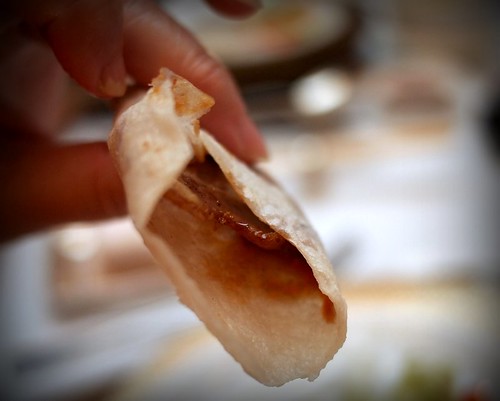 What’s better than dining with chopsticks?

Eating it with you hands of course. We Asians believe that eating with the hands add flavour and enjoyment to the meal. ( We wash our hands first of course!) 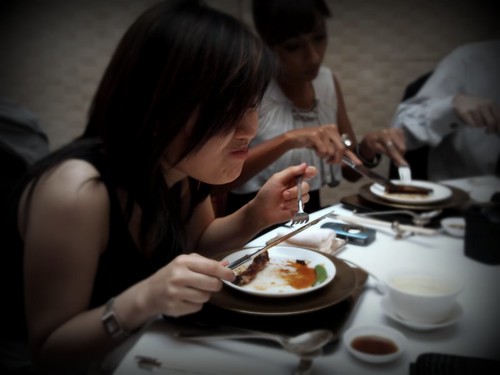 What’s keeping Lyla so preoccupied that she forgets a camera is trained on her.. watching her every move.. and picking up on her contented, full-mouthed grin? 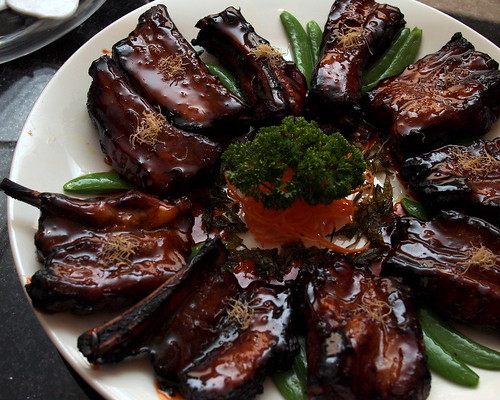 Baked Spare Ribs of course! And you know, Lyla being the sweet polite girl that she is, will never grin with her mouth open..

Sticky, sweet and a relatively inexpensive cut of meat, this glistening baby is delicious. It tasted like Charsiew (BBQ Pork) but served as a large hunk of meat with the bone still intact. The best thing about this cut of pork was the quality of fat dispersed throughout the meat. Generous and rich is the best way to describe it!

Only RM14 per rib. FBB and A lil Fatmonkey said that they would be back to have a bowl of rice with a RM14 rib each. A perfectly good, inexpensive lunch! 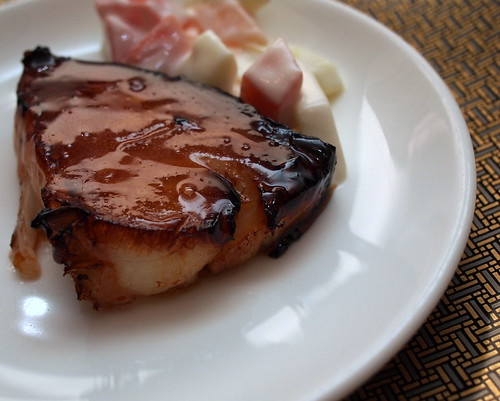 The Baked Cod Fish with Honey Glaze was the least of my favourites simply because the honey glaze made it taste just like the pork ribs from before.

Too much of a good thing is a real overkill. Also, I don’t know about you, but I prefer my Cod fish done light with very little preparation/sauce on it. 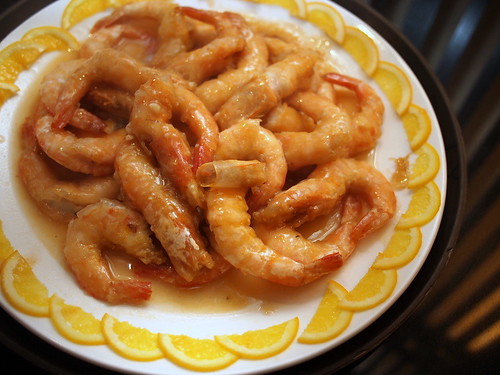 Prawns baked in Champagne.. yes I can hear what you are thinking.. such a waste of champagne and I totally agree!

Anyway the aroma of the prawns were gorgeous. It smell so intoxicatingly good that I wanted to throw back my head and drink the sauce. 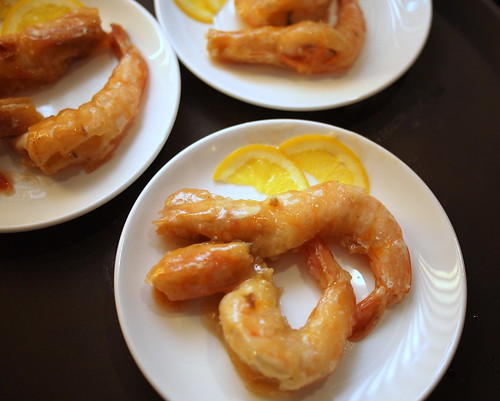 Flavour wise, the prawn was rather bland and the flesh a little overcooked. The juices in the prawn head were delicious though and I sucked mine clean. 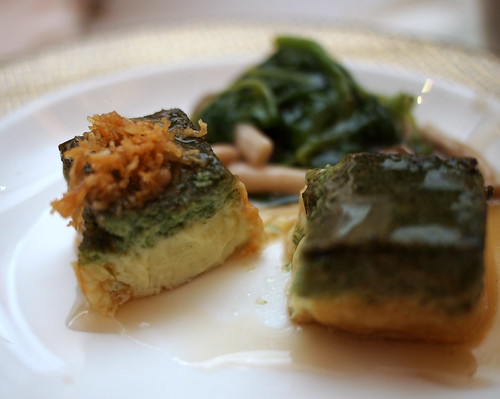 Li Yen’s signature bean curd (tofu) with Honshimeju Mushrooms and Spinach was a delight to eat. This is also photo 2 and 3 earlier on this post. The two toned soft fluffy bean curd was too pretty to eat really! I loved the way the soft texture of the tofu complemented the smooth flavour of the mushroom and spinach. 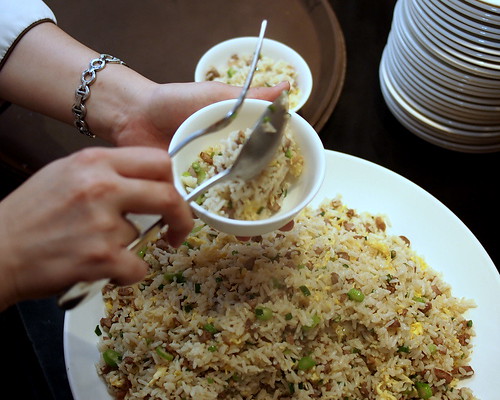 Does not look like much but this rice was good! I had one bowl and Aly had two. If you ask anyone this is quite a feat.. for both of us;) 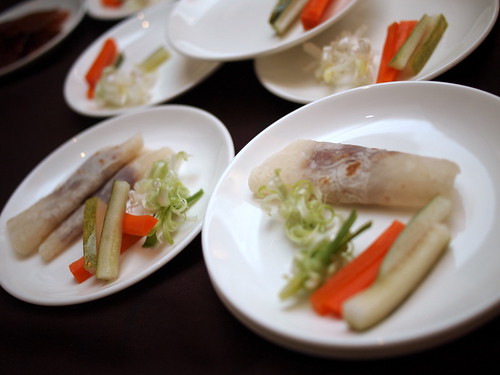 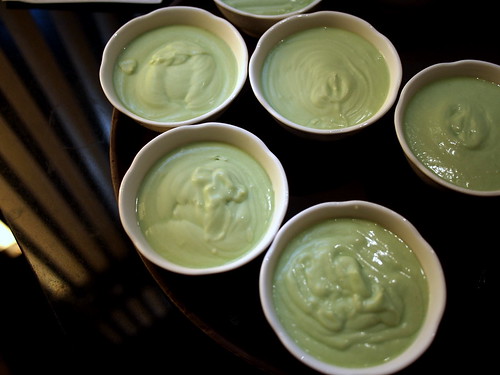 No, this is not some strange facial, cucumber mask. This is the avocado cream.

I was completely smitten with dessert because it was gorgeous! It tasted like avocado ice-cream but with a slightly thinner consistency. Hints of vanilla, smooth and creamy, really shone through and with that characteristic avocado richness, this dessert topped many I have eaten at the end of a Chinese meal. A great conclusion to the night for sure.

It’s always nice to have a reason to visit La Scala. Being a new place and all, you still get to see finishing touches…