One of the greatest attractions in Sub-Saharan Africa are their National Parks.

What’s always fascinated me is the abundance of species, the exotic flora, and the fact that you can get so close to the wild life leave many at a loss for words.

If you do get a chance to visit, give yourself ample time because some parks are so massive that you need at least a week to explore it entirely. But this is exactly where true adventure and excitement lie. There’s something utterly primal about waiting to spot massive, wild cats and huge predators of nature. It makes one feel really minute and insignificant in the scheme of life and the food chain!

Here’s 6 of my favourite national parks in Africa to visit.. 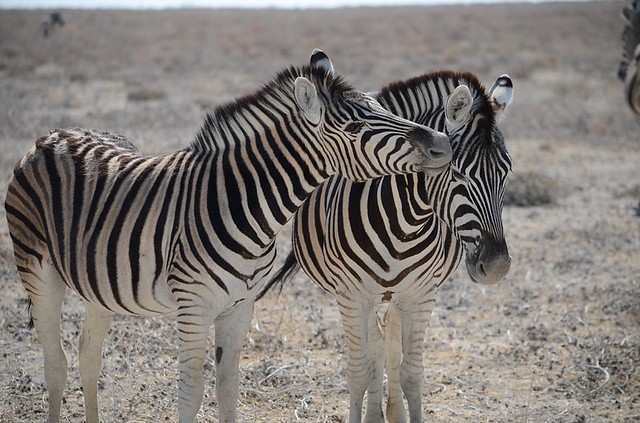 Etosha National Park spans an area of 22,270 square km and gets its name from the large Etosha pan which is located within the park. The Etosha pan, 4,760 square km, covers 23% of the area of the total area of the Etosha National Park. This salt pan is so large it can be seen from space! The park is home to hundreds of species of mammals, birds and reptiles, including several threatened and endangered species such as the black rhinoceros. The park is located in the Namibia, Kunene region and shares boundaries with the regions of Oshana, Oshikoto and Otjozondjupa. Yet there is abundant wildlife that congregates around the waterholes, giving you almost guaranteed game sightings.

The specialty in Etosha is that you can use your own vehicle to explore and get a more personal encounter with the wildlife. And also you don’t have to take great pains looking forward to seeing animals here. It’s a good idea to set up camp and wait at the water holes – Okaukuejo Water Hole is famous for this as many animals meander here to quench their thirst at dusk. This is where you come across multiple species of animals, drawn towards the springs of life, so to speak.  You can even cool off at Halali camp and get in touch with the native culture which is also very exciting. 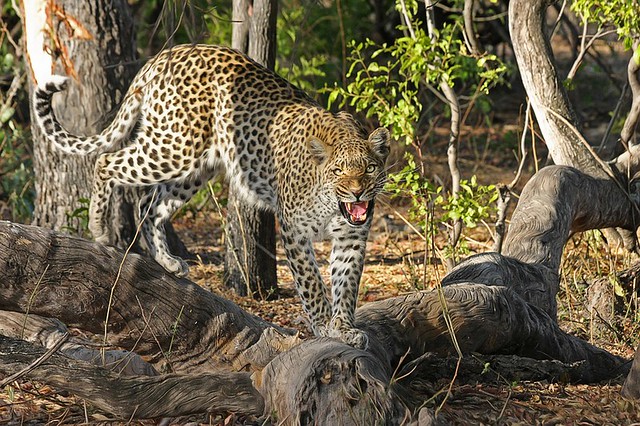 If you are willing to spend a night out, under the elements, waiting to spot wildlife then Botswana is definitely for you. This gem of the Kalahari Desert is proudly the world’s largest inland river delta and an incredible travel destination. The Okavango Delta (or Okavango Grassland) in Botswana is a very large, swampy inland delta formed where the Okavango River reaches a tectonic trough in the central part of the endorheic basin of the Kalahari. The 1000th site to be inscribed on UNESCO’s World Heritage List in 2014, the Okavango Delta is an important wildlife area protected by both the Moremi Game Reserve, on its eastern edge, and the numerous wildlife concessions within Ngamiland. An oasis in an otherwise dry environment the Okavango Delta is known for its superb wildlife, with large populations of mammals and excellent birding particularly in the breeding season.

It is home to many endangered species of mammals like the cheetah, white rhinoceros, and African wild dog. When you do spot them here, it will be a close-up personal encounter which will be unforgettable. There’s also a variety of bird species which adds color to the whole ambiance. The best way to explore the delta is on foot and by mokoro (dug out canoe) where polers guide you through the labyrinth of channels, standing like gondoliers at the rear of the boat. The Okavango is very good for birders as huge numbers of waterfowl and raptors reside here, but you also find elephant, zebra, buffalo, wildebeest, giraffe, hippo, crocodile, lion and kudu. 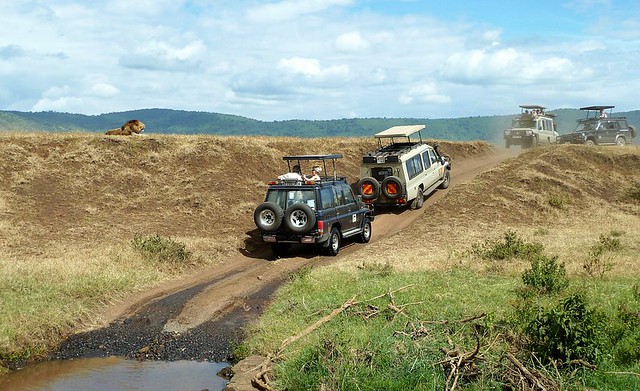 All the national parks in Sub-Saharan Africa are competitively different, wild, exotic and exciting. Ngorongoro is a unique wildlife reserve that will take your breath away with its beautiful setting. The place is a paradise for nature lovers. 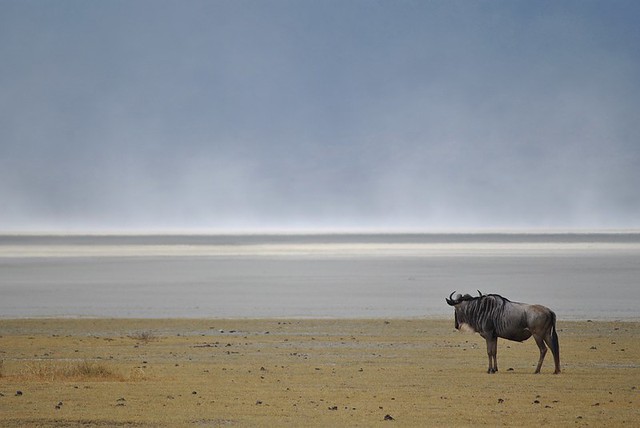 Ngorongoro Crater is a large un-flooded caldera formed from the explosion of a volcano million years ago. Get into a safari tour and encounter predators and other species wandering about including the Big Five. Watch majestic tuskers, black-manned lion kings and black rhinos gazing casually. What you can do here ranges from fun safaris or camping to thrill-packed mountain climbing. It is a must to visit when you are in Tanzania.

Ah.. the great migration. Apparently the sight will leave you speechless. Serengeti National Park, in northern Tanzania, is known for its massive annual migration of wildebeest and zebra. Seeking new pasture, the herds move north from their breeding grounds in the grassy southern plains. Many cross the marshy western corridor’s crocodile-infested Grumeti River. Others veer northeast to the Lobo Hills, home to black eagles. Black rhinos inhabit the granite outcrops of the Moru Kopjes.

It is a place where the land moves on forever, so vast and so wild. Serengeti national park in Tanzania is world-famous for being one of the oldest ecosystems in the world. This is one of the national parks in Sub-Saharan Africa which is abundant with diverse fauna and flora. Here are some interesting things to do and see. 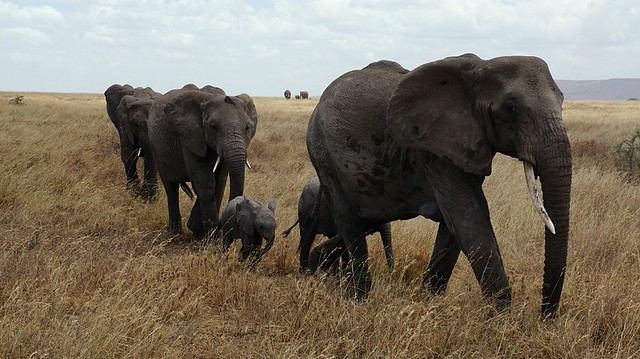 Spend some time on game drives during the day, or catch nocturnal animals with a night drive. You can also have the choice exploring wildlife on foot or horseback which is pretty amazing. Another interesting sight to visit is the mountain-like rock formations known as Moru Kopjes. 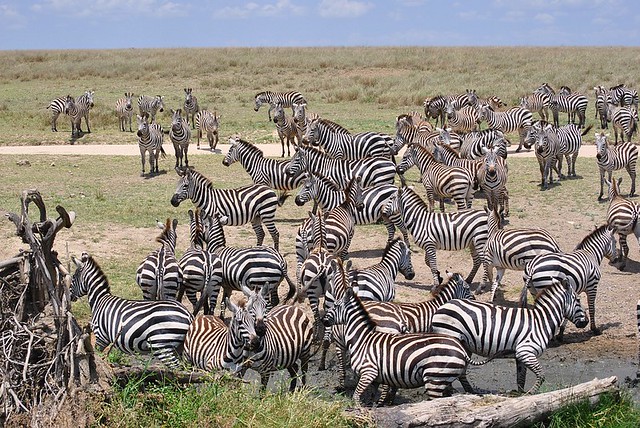 Most of all, prepare yourself to watch one of the best events in the natural world; the great migration. Serengeti is most special for the great migration of Zebras and Wildebeest during the times of short rains. It’s simply overwhelming to see massive herds of animals voyaging across. Also, remember to go beyond wildlife and visit a Maasai village to get in touch with the ethnic culture of the semi-nomadic villagers.

Just like many national parks in Sub-Saharan Africa, Virunga is also blessed with a surrealistic, magical ambiance. But the top attractions here go beyond just nature. Virunga in Congo prides themselves for being home to the last mountain gorillas in the world. Trek and meet the mountain gorilla family in Virunga who are intelligent and very good-natured. The constant watchful mothers and the mischievous little ones will never cease to delight you. Complement this journey with a trek to discover chimpanzees.

Then head for something surprisingly wonderful … find yourself trekking the amazing Nyiragongo Volcano which is the world’s largest lava lake. Get absorbed in hearing and seeing the bubbling of lava with a peek at the lake. And when you make it to the summit of Nyiragongo, you will experience the most spectacular view ever. At dawn or dusk, it’s even more amazing.

Kruger National Park is one of the largest game reserves in Africa. It covers an area of 19,485 square kilometres (7,523 sq mi) in the provinces of Limpopo and Mpumalanga in northeastern South Africa. To the west and south of the Kruger National Park are the two South African provinces of Limpopo and Mpumalanga. In the north is Zimbabwe, and to the east is Mozambique. It is now part of the Great Limpopo Transfrontier Park, a peace park that links Kruger National Park with the Gonarezhou National Park in Zimbabwe, and with the Limpopo National Park in Mozambique. The park is part of the Kruger to Canyons Biosphere an area designated by the United Nations Educational, Scientific and Cultural Organization (UNESCO) as an International Man and Biosphere Reserve. This place is definitely a ‘big deal’ if you catch what we’re saying. 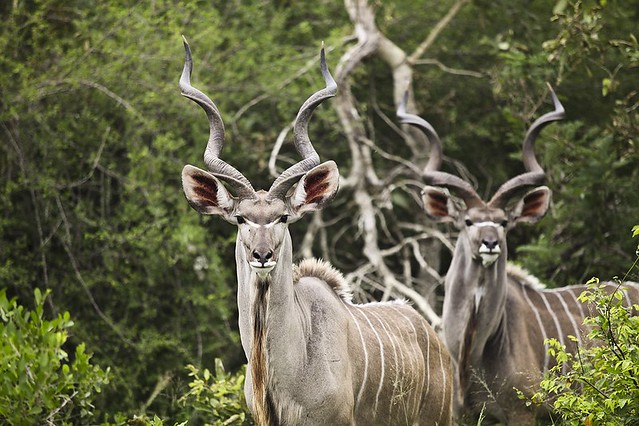 The world’s largest rhino population is here and this might be your last chance to spot these endangered animals as a herd. And to take it to the next level of wildlife, Kruger offers impressive live action like the famous lion-buffalo-crocodile battles. Since this is one of the most massive national parks in Sub-Saharan Africa, you will have to give it few days of camping and lodging. This is the most exciting part where you can observe the routine animal behavior which is a once in a lifetime experience.

It’s not just exploring wildlife that will fascinate you, but being one with the wildlife. You get to watch the best of animals gaze around, hunt for sport and then doze off. There are luxury lodges, or self catering lodges so pick your style of stay really. Its high density of wild animals includes the Big 5: lions, leopards, rhinos, elephants and buffalos. Hundreds of other mammals make their home here, as do diverse bird species such as vultures, eagles and storks. Mountains, bush plains and tropical forests are all part of the landscape.

And these are the Sub-Saharan Africa National Parks that we highly recommend you visit, if you ever get the chance!

About the Author: This article was written by Raeesha Ikram, savvy travel blogger at asabbatical.com , a personal travel blog of Adrian Sameli. To connect with Raeesha, follow her on Facebook. All photos in this post, are credited to her.

Hello dear Readers! Boy, have we got some exciting news for you. In conjunction with VALENTINE’S DAY, FEBRUARY 14TH, we are giving away,  …