Once there was a girl and she decided to learn how to cook ramen.
She fell in love with a boy, got married and they both opened a Ramen shop. 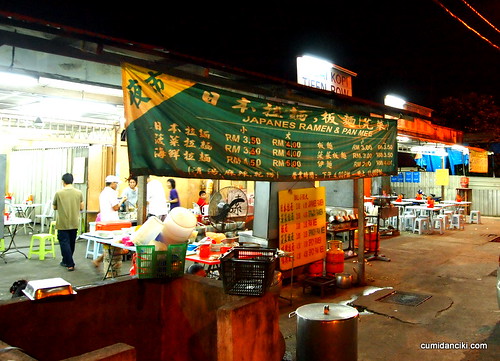 Serdang or Seri Kembangan has to be one of our favourite places for Chinese Hawker food, especially Pan Mee. Though not the easiest of places to navigate, our previous excursions to this part of town have always been fruitful. The food has always been good. 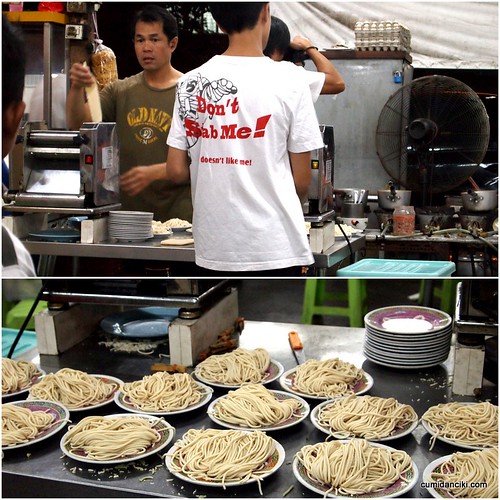 For the typical Chinese, life without noodles would be like ying without yang, ben without jerry, david without Goliath. It is a staple in Chinese cuisine. There is a great variety of Chinese noodles, which varies in ingredients, shape or width, colour and manner of preparation. In Malaysia, Chinese noodles have adopted even the native cuisines of neighbouring countries such as Korea and Japan – but make no mistake dangmyeon and ramen, for example, are still both of Chinese origin!

This really cool shop in Serdang, is famous for their Japanese Ramen and Pan Mee (Pan Noodles). When we asked the owners for the name (husband and wife team) they told us that the place had no name. Just ‘The Ramen Pan Mee shop’, they tell us. Apparently “Ho Chak” will be filming them next week. 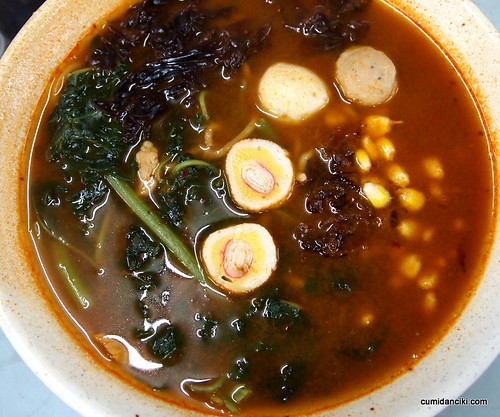 You will see the characteristic Ramen traits of meat or fish based broth, dried seaweed and corn. However, you will notice the not so common Chili Soup stock which indicates that this “ramen” has already begun to take on the local Malaysian Chinese flavour and method of preparation. The flavour of this chili is different from Japanese Chili as it is way spicier. A hybrid if you like. I loved my chili Ramen! Spicy and piping hot. The noodles were good but because I took so long photographing the bowls of food, they got a little bit too well done. 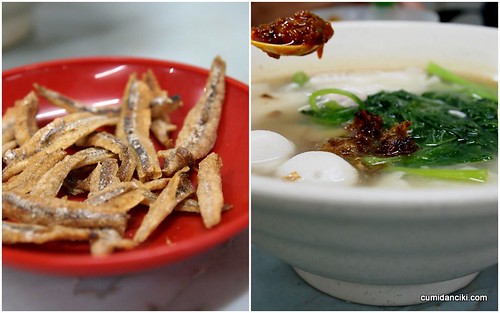 Cumi’s regular “pulled” Pan mee was good too. In fact, his broth was better tasting than my Chili one because it had more of an unadulterated taste. The chili was so searing hot it kind of obliterated the natural flavours in the bowl. 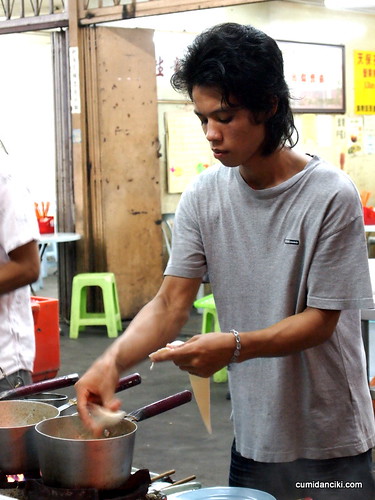 What exactly is this “pulled” pan mee. Well, you can see the man in the photo and demonstrating the technique in obtaining flat pieces of noodles by breaking off the flattened dough with his hands and chucking the pieces into hot water. The cooking process is the same. Just the shape produced is slightly different from the long stringy ramen noodles. 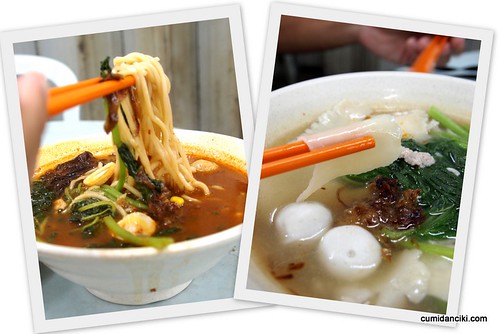 Flat and white (on the right), this pulled pan mee has a lovely texture – it is extremely chewy. 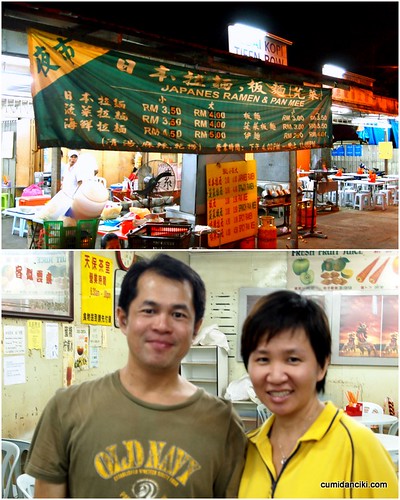 Once there was a girl and she decided to learn how to cook ramen.
She fell in love with a boy, got married and they both opened a Ramen shop.

A few moments later, Cumi’s appetite goes into overdrive and he decides he want to push the noodle boundaries and become, “The Guy who planned to eat Serdang” .. and did! 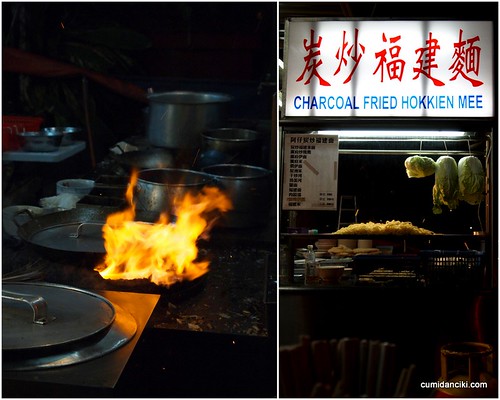 Hokkien Mee! Another obsession of the Chinese. Everybody claims to know, the BEST Hokkien mee and will swear by it. Where is the best Hokkien Mee? Cumi & ciki have yet to find it. 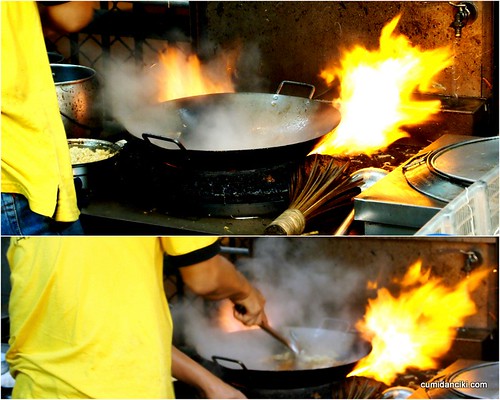 This shop in Serdang, situated just further a long from the Ramen-Pan Mee place is not bad at all. It says Charcoal fried hokkien mee on the sign and this is a real plus because it means that the food should taste better than noodles that are Wok fried over a regular flame. 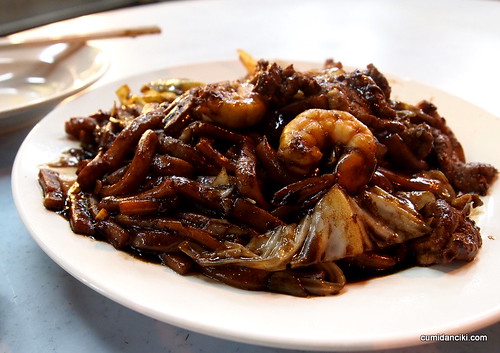 The Hokkien Mee is greasy enough. The strands of noodles are thick and smooth and slither down your throat due to the generous amount of pork lard employed in the cooking process. The aroma of the wok is evident in the cooking. Huge prawns, pork slices and cabbage adorn this black plate of noodles. 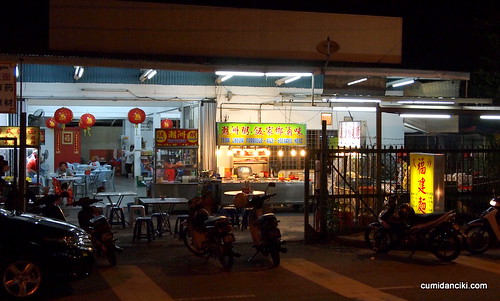 Food in Serdang is cheap. The bowl of Pan Mee from the ramen shop was huge but it only set us back by RM3.50 and then just RM5 for this plate of Hokkien Mee. Traveling out here from Petaling Jaya is worth it because the food is great and affordable.

The next time you pass through Serdang, don’t forget to check out the Ramen Girl!