It’s World Cup Fever! If you have not caught the World Cup bug, here is something that should give you the shivers!

Benny and Mitch are two backpackers who have attempted to travel from Berlin to Cape Town, backpacking through West Africa to get to the World Cup in South Africa, overland! According to Benny, traveling Africa overland you get to see almost everything and when you eat alongside the locals, you’ll experience cuisine like you’ve never imagined.

It’s street food baby, and if you are in Africa for the World Cup,  here is their Travel Tip on 5 strange dishes you should try !

1. Use your brain – Burkina Faso 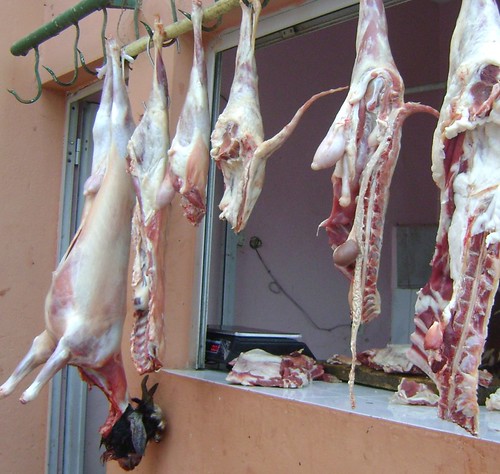 They say presentation is every thing.

Well, it has never been more apparent in Africa then in Burkina Faso where we sampled ‘goat’s head soup’. Yes, they serve goat’s brain poached in a soup.. and to add authenticity, they serve it in a cross section of the goat’s skull. It is not uncommon to see neatly wrapped tubes on the grill and that would be a delectable side dish – goat intestines stuffed with other internal bits and pieces. Above you see a photo of a butcher’s shop. The head of the goat is never thrown away.. why waste? You can use it as a bowl later!

Nothing’s harder than eating fu fu with your fingers but that is how it’s done. Fu fu is a yam based food which is pounded until it sticks together like a gluey paste. It is usually served with a goat meat sauce with plenty of spice. This is a West African staple and it’s actually quite tasty but our tip is to pack a spoon – eating soup with your hands is tough although it’s a great ice-breaker and a source of local entertainment if you don’t mind drawing a crowd;) 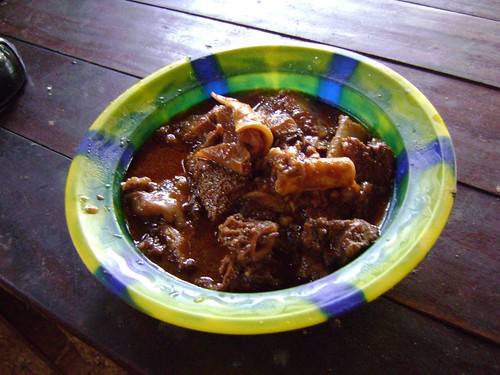 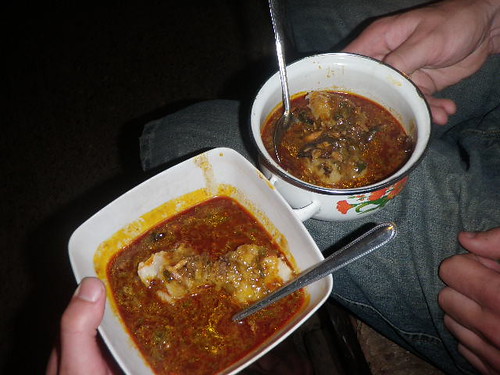 Head down to Bamako, and use your nose to follow the fresh smells to the local markets. If you don’t understand French, like us, you’ll know which animal is in the stew by the sounds the chef makes.  (clucking? oinking? moo-ing?) This time round we heard “moo”, so beef stew it turned out to be.  What luck.. this stew served with bread cost only €1 -a real bargain. Why so cheap? Well, turns out you might know the animal but you won’t know the body parts. We can confirm at least two ‘spare parts’ of the cow that are new to us – cow tongue and at least one major artery diced into inch long lengths! (Oh, our induction into the eating culture was happening faster than we imagined!)

Chicken must be one of the safest bets when you are not the sort to experiment with your food. With ‘birds’, one can either roast it, or fry it or even stuff it. Those are the most common ways of cooking a chicken. By the time it is prepared and ready to be eaten, there is normally a juicy cooked body but with no head and nor feet.

Enter street side Cameroon for the alternative. Take the chicken head and stuff it into the body. Same goes for the feet. Roast it over hot coals and lunch is served! Lovely..  but it it takes awhile to work out whether it’s the brain or the eye balls that are hardest to swallow:P 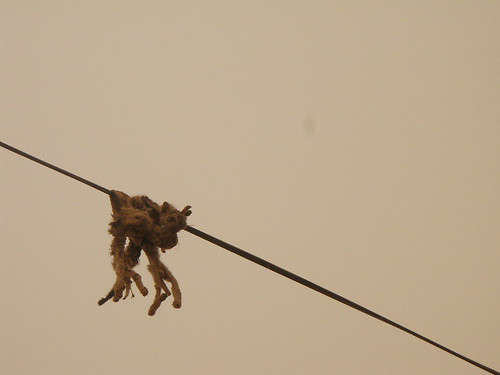 Ever heard of Timbuktu? Yes, the place exists and let me just say that for all you animal lovers out there, you will probably want to read no further.  The strangest thing by far, that we have come across, is a dish eaten in Timbaktu – grilled cat. We didn’t try it but there was plenty of evidence to suggest that it was more then popular with the locals. (photo – cat skin hanging from the telephone wires)

About the today’s guest writers: 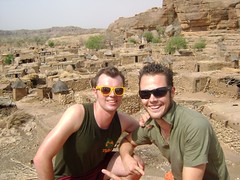 Benny and Mitch are two backpackers who have attempted to travel from Berlin to Cape Town, backpacking West Africa to get to the World Cup overland!  They have crossed through deserts, jungle, monsoons and countless border officials to get to their destination.

They are in the business of breaking down barriers that exist between cultures, through interacting with locals, getting active in local communities, finding things they never imagined existed and learning what Africa is all about.

In terms of Travel, they have seen over 75 countries between them. Both Benny and Mitch are about to turn 24 and are both from Brisbane, Australia. Benny now lives in Berlin, which according to him, is pretty much the coolest city on earth!

If you are wondering what this gorgeous looking, spa-like sanctuary is, you have just stepped into the restaurant “Erawan Classic Thai & Fusion”, located…