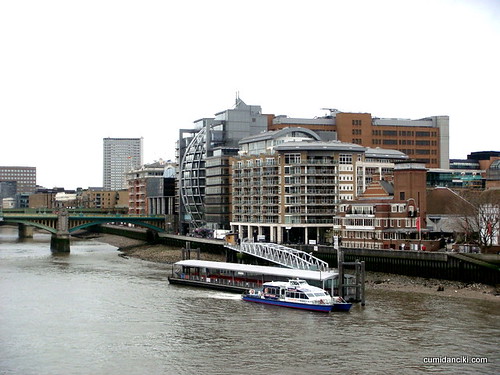 From St Paul’s cathedral, I leg it over to Selfridges (Oxford circus stop) as I am well, as you’ve already guessed, somewhat late for lunch. 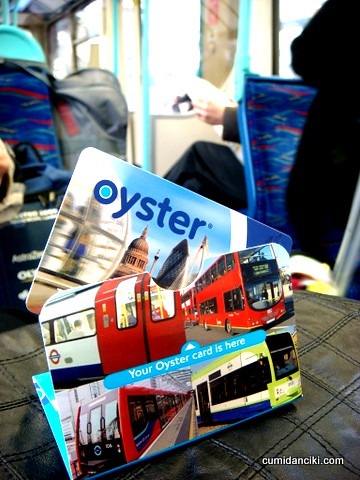 I love my Oyster. It lets me get to my destination with great ease. With the oyster you have the ease of “auto top-up” and it is also the fastest, smartest and most cost-effective way to pay for single journeys on the bus, Tube, DLR, tram, London Overground, Thames Clippers and participating National Rail services. This particular Oyster was such a pretty one, from the Excel convention center. The meeting organizers put thirty quid in it for all the participants. Got to love the English.. so damn organized! 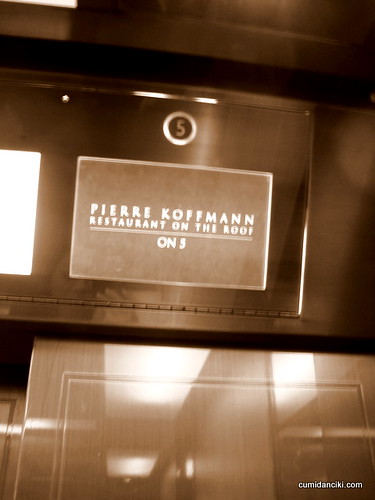 My friends wanted to take me to this amazing little place on the roof of Selfridges, started by the chef who at the time epitomized haute cuisine, Pierre Koffmann – Three Michelin stars don’t come cheap, and Chef Koffmann wore the 3 stars.  He then retired after 25 years in the kitchen and was sorely missed by his fans.

Then, herald his fabulous comeback in the form of the Pop-Up restaurant on Selfridges (the famous shopping center) roof top. The manager told us that this was in fact, an experiment restaurant (originally planned for a short season in October, the organizers were unprepared for the stampede of bookings and had extended the time line to end November) and just as quickly as it had appeared, it would close again.  We were lucky to dine here in the last and final week of its existence. 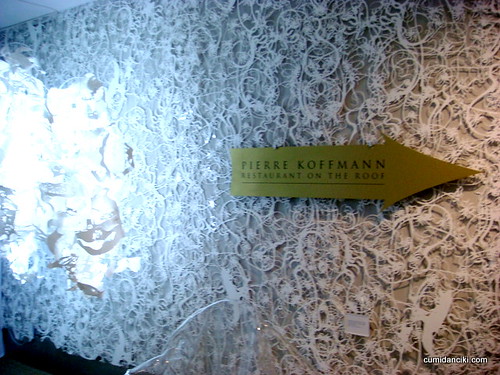 The entire layout of the Selfridges roof-top is pretty amazing, so I am told. The gastronomic experience begins when you enter a lift, dedicated specially to the Restaurant on the 5th floor, via the perfume section in the departmental store. It takes some finding, but I just looked out for the lady dressed smartly in black, holding a clipboard (so the concierge told me). You then pass a corridor that looks like glowing lace .. some sort of white chiffon and a hanging, modern star-burst lamp.. keep going and you arrive at the reception area. 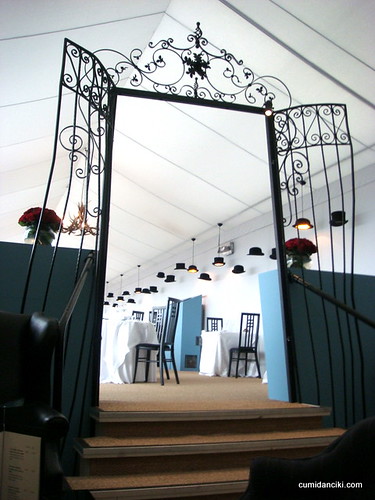 If you’re arriving for dinner, the last of the sunset can be seen through the windows and if you are arriving for lunch, you get a gorgeous birds eye view of the roof tops in that area. We were there on a blustery day and the canopy was just flying wild and crazy. At one point, we thought it was going to blow off, but the waitress assured us that it has never happened (all of ONE month, how reassuring)! 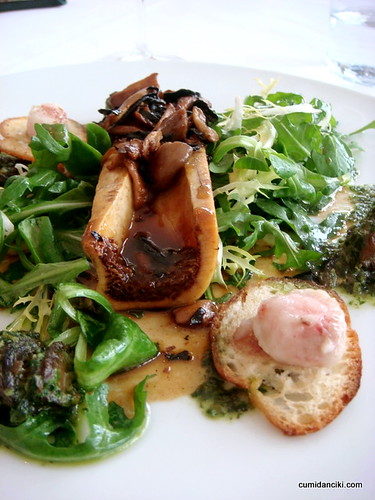 fricassee of wild mushrooms and snails with bone marrow

All diners have to have the set menu, £75 for three courses. Not cheap, particularly considering it doesn’t include any wines etc.  For that sort of money, one would half expect a tasting menu, not just three courses. However, once we saw the menu, we realized that each one of the three courses, carried an extensive choice of 6 or seven different types of dishes. So I guess you could say we were hardly limited in our selection.

The fricassee of wild mushrooms and snails with bone marrow was excellent, served in a trough made from a split bone. The marrow was bloody and rich with flavour , with just the right amount of fat to erythrocyte ratio. The wild mushroom sauce was intoxicatingly good – a great parring of tastes and textures. 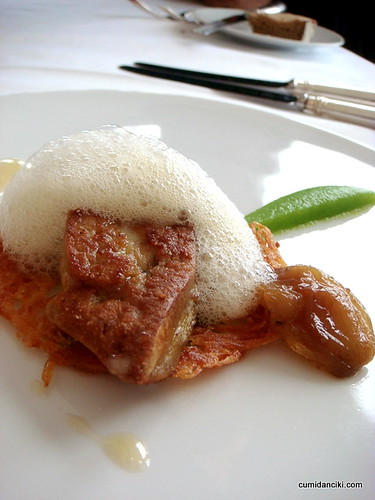 Pan-fried foie gras with a potato galette and Sauternes jus was a nice size of foie gras, but ours had been slightly overdone and not very good at all. I have had better. A slick of tart green apple purée was the saving grace though and complemented the dish to perfection. 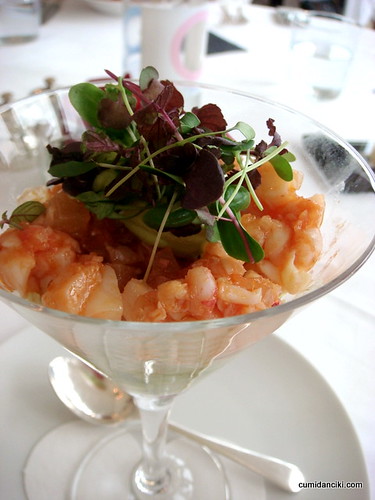 Scottish lobster and avocado with a lime jelly

The cocktail of Scottish lobster and avocado with a lime jelly is served in a martini glass, layered like a fantasy savory trifle was forgettable. Nothing outstanding about this lobster cocktail. I could have been eating this in KL or PJ or Singapore. Nice, but not terribly impressionable. 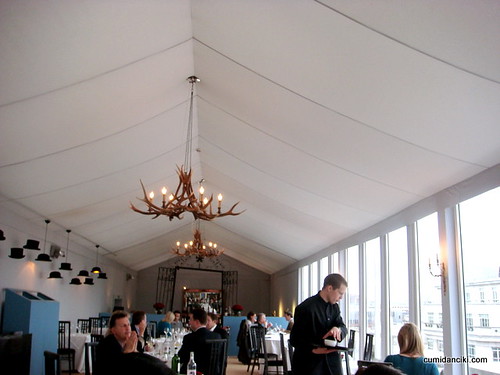 For the mains, we opted for the roast venison with red cabbage, hazelnut purée and red wine and cassis reduction.  We were served then, what the waitress called, a deconstructed version of the Middle European classic. Hmmm, I keep hearing this buzz-word “deconstructed” in food descriptions, especially here in London. I would take it mean that the individual components are arranged separately, rather than combined? However, when I look at the food, I don’t see it. If it’s a sauce, for instance, it still looks like sauce, salad looks like salad, etc.

So here, the ‘deconstructed venison’ looked like  venison on top a mound of cold, pickled red cabbage.

It was nice, but the meat was just normal in texture and taste. Again I was unsure what flavours I was suppose to be looking out for so either it was so subtle and effective that I missed it or, it was just plain tasting? 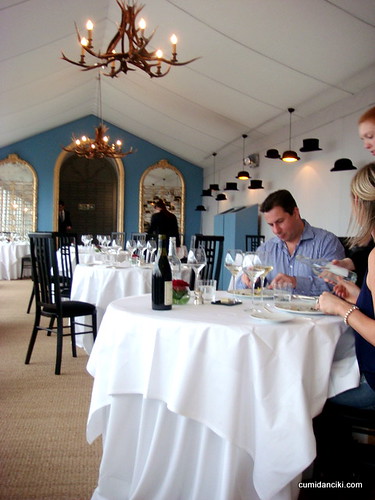 Wine after the bubbly. Many, many glasses of wine. 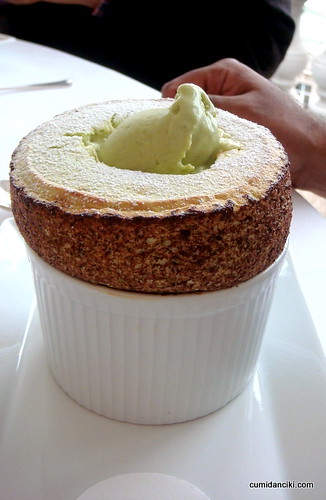 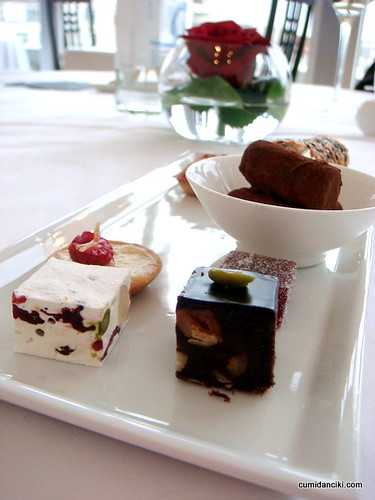 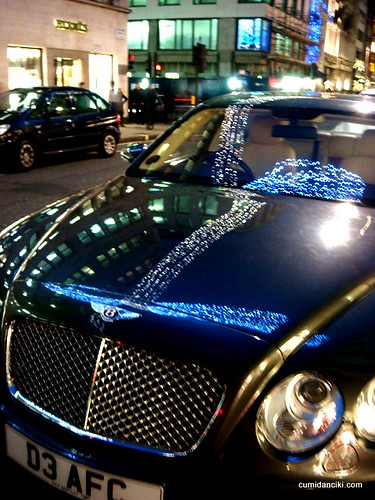 Lunch finished close to 4 p.m. and a rather tipsy entourage traipsed out onto a dusk enshrouded Bond Street to walk off the calories and do some hardcore shopping. There is something so cardinally sinful about finishing lunch and emerging from the restaurant only to be greeted by night fall (though granted, it is approaching winter time and the daylight hours are getting shorter) that I cannot quite explain. Sinfully, pleasurably, wrong! 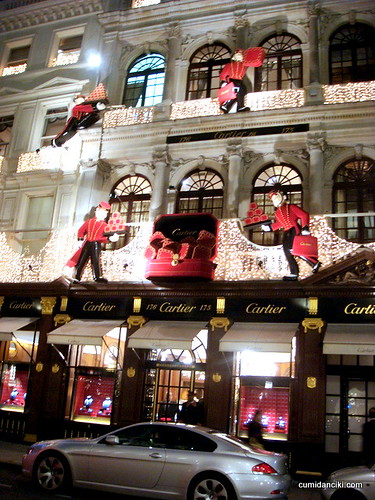 Shop till you drop. 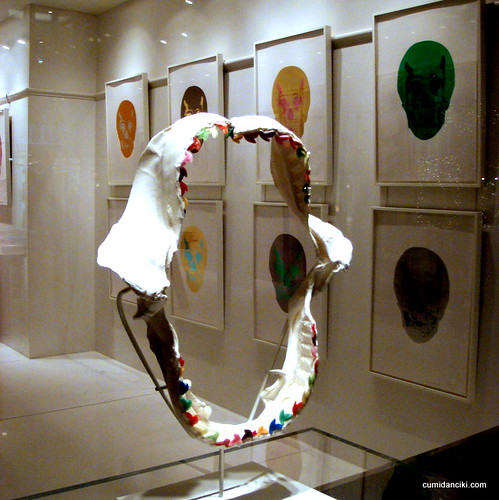 I like this modern piece of art. It looks like the jaw of some strange animal that had jelly babies for teeth. That’s what I call, a ‘sweet tooth’.

Since February, Selangor, Malaysia’s most populous state and its economic and industrial hub, has been in a water rationing programme. Severe drought in months…