In the Yala Province, there is a concentration of military roadblocks to police the civil unrest. We read about roadblocks being attacked but never noticed anything amiss. Every roadblock we stopped at, was met with a smile and a wave from a trooper.. and really young, handsome ones, at that! 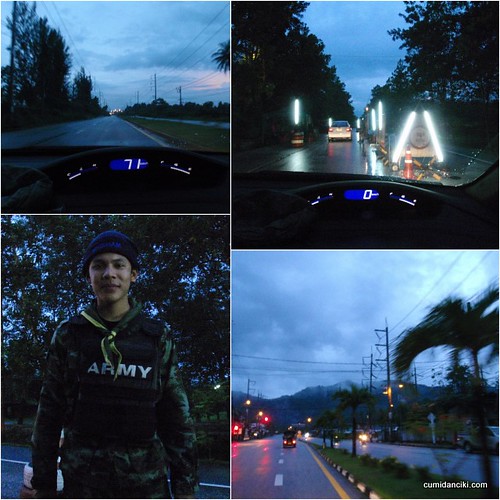 We got in late to Songkhla and quickly found a guesthouse to stay just a few blocks away from the town center. It was a nice simple guesthouse (we forgot the name but the street is pictured) with a little garden and parking provided for about BHT300 a night. It’s managed by a lady whose family had left the entire bungalow to be managed by her. The family also has another bungalow next door which caters for more budget conscious travelers. She didn’t want her picture taken as she wasn’t made up at the point of conversation! 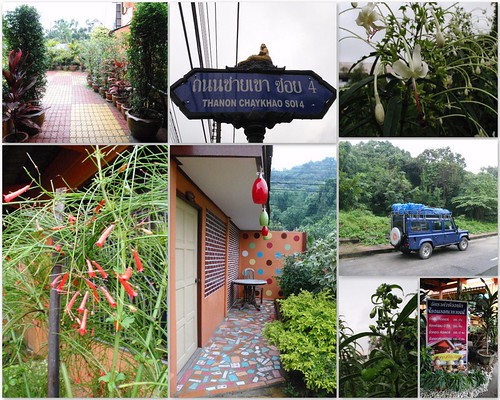 We woke up early next morning to hit the town for breakfast and check out any Songkhla oddities.

Songkhla  in the Songkhla Province of southern Thailand, has a population of only 80K people or so. The city is a part of Greater Hatyai-Songkhla Metropolitan Area. Despite being smaller than the neighboring city Hat Yai, Songkhla is the capital of Songkhla Province as well as the Mueang Songkhla district (Songkhla Town district).

Due to its location at the opening of the big Songkhla lake to the Gulf of Thailand, Songkhla is a fishing town and also an important harbour. It is the major seaport on the east side of the Isthmus of Kra. Songkhla was sometimes known as Singgora or Singora (City of Lions)… Hmmm, I wonder what our neighbours Singapore , think about that:P 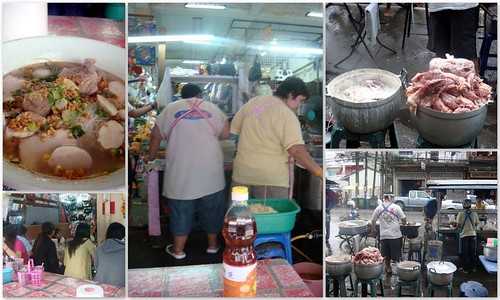 Breakfast happened at a thriving wet market where 2 large ladies operated this pork noodle stall. They could be sisters. On foot, we covered the streets in search of the little wonders.  Those fruits you see in the collage below are palm fruits. Due to communication barriers we couldn’t find out its uses. Hidden in a larger souvenir shop was Coffeebucks where ciki found her fix! 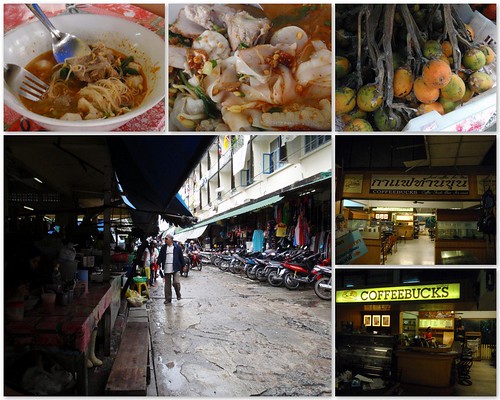 The shop below sells crispy sweet-salty pork chips or crackling. Seems to be the only shop that sells this delicious snack in Songkhla. The lady owner gave us samplings and it won us over – we bought lots of it back with us to KL!  The round fried thingy is not the pork crackling but a street snack Cumi bought on the way to the shop. Crispy outside, chewy inside with fresh mashed bananas and dessicated coconut. Damn it! I want to eat that now! 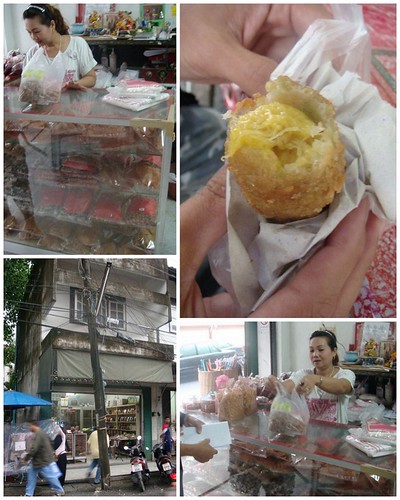 Below is the address of the pork crackling shop. Sorry poor quality photo from a 1030SW Olympus – never buy a point and shoot Olympus ever.. (only good for water sports because it is water proof). 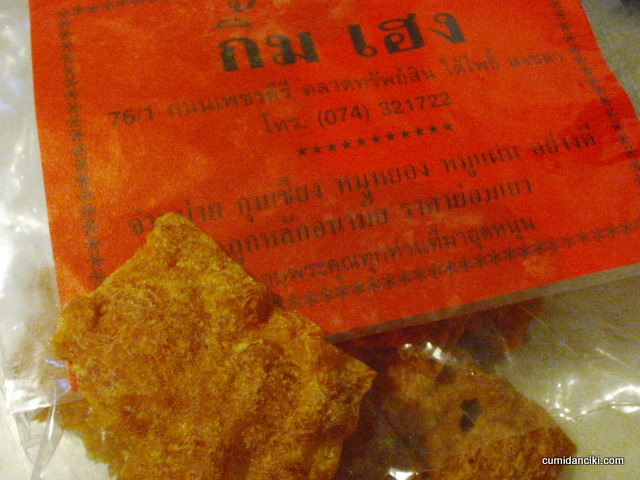 Pork Cracklings that send you to heaven… by choice!

We shifted to another new modern guesthouse where the newly furnished room cost about BHT400. It was spanking new, had fantastic air conditioning as well as hot water and satellite TV. Dirt Cheap! Needless to say we were very happy. This place was so new, it didn’t have a name or land-line yet. 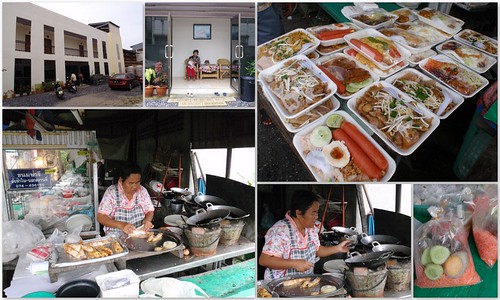 The next morning, we had more snacks for breakfast and headed to the pier. 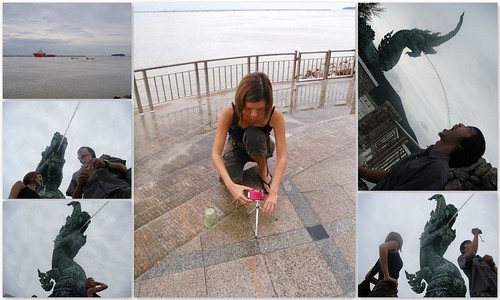 Cam-whoring moments at pier. Cumi was in a good mood as he actually participated in the narcissistic behavior. They served beer here and Cumi’s participation can be attributed to this. That’s  Ciki, with her faithful sony T100 and mini-tripod, setting up the shoot. What a pro.. 😛

So done with Songkhla, we headed out east to Satun!