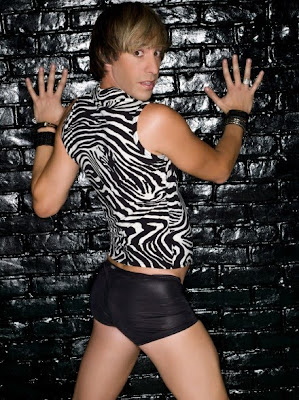 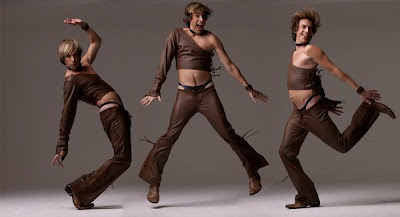 Photo from here and here

We watched Bruno (the uncensored version) and found the show a riot! This film mainly addresses two things: America’s insatiable obsession with stardom and its perceptions/treatment of the homosexual community.

The show is shallow and silly, but the actor Sacha Baron is pretty damn convincing in his role of recently fired Austrian fashion icon (ok, apart from the cacat Austrian accent.. )

The movie takes the term crude humor to new heights. Though this show will definitely put off a fair number of the decent public, there are some genuinely serious moments in the film that will make you stop and think. The revelation of just how shallow and soulless mankind can be, will make you want to cry, squirm, LOL and barf.. all at the same time, at different intervals of the show!

Malaysian censorship board would have a great time cutting it up so much that viewers will be left with just 15minutes! – 10minutes goes to the opening and closing credits!

SPOILER!….. TRAILER
Footnote:
*watch out for the velcro suite.. it’s the bomb;)
**Also, if you watch the movie, you will see some of the reactions of the people interviewed are pretty real, and may well be, real. We wondered so much about the reality of it all that we googled and we found Brian Hickey interviewing the karate guy and the holy roller. Thanks Brian for letting us link to your hardwork!