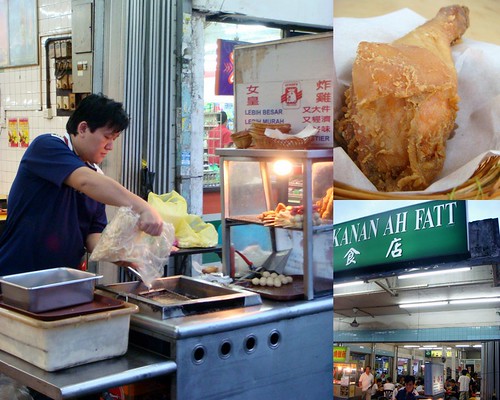 This guy’s fried chicken is good! It’s on the opposite side of Ah Wah’s famous hokkien mee off jalan 222. The reason why we ended up here was because the crowd was so insane at Ah Wah’s, we refused to wait. Ah Wah’s black, shiny, greasy, chee-yar-char ridden Hokkien Mee is by far our favourite but today we were just not in to mood to sit and wait because we were ravenous.

The noodle at Ah Fatt’s leaves a lot to be desired (Cumi was not impressed – it lacked taste, wok-hei, flavour.. ) but the fried Chicken (at just RM1.90) per drumstick was amazingly good. Crispy, light, crunchy batter with the must succulent freshly slaughtered chicken (or it sure tasted like it.. biting into it, sweet hot essence squirts out from the bone) on the inside. At that price we could have had THREE drumsticks rather than that awful ONE plate of fried meehoon at RM5 or so.

Next time, go for the chicken!