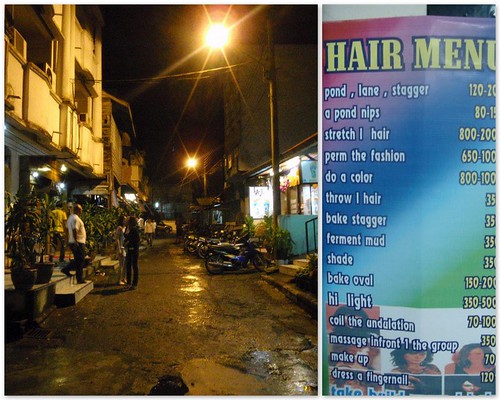 What hairdo shall I employ before my “big night out”?

Hmmm let me see.. If I intend to drink a lake’s worth of booze, I should try the
‘pond lane stagger’ ,

If I end up plastered, face down in the ground, I should try the
‘ferment mud’,

and finally, if I intend to get entangled in the rise and fall of the landscape, I should definitely go for the
‘coil the undulation’ 😛

Anyway, try and spot/match the hair-do of the man ‘soliciting’ in the photo.. I think that should definitely classify as a ‘BAKE OVAL’ .. ya think?! 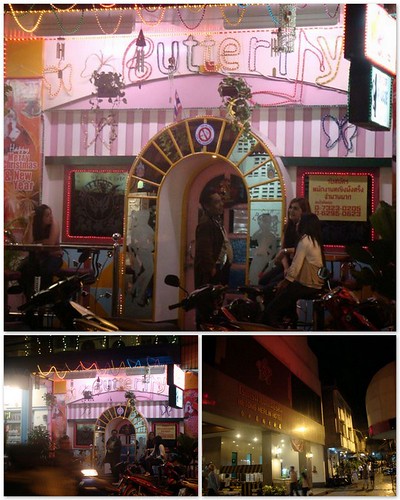 Anyway, what can we say? Walking the streets amidst all these late night ‘activities’ , we never once felt threatened and eventhough some of the people on the streets might not be doing the sort of “work” that most folk deem proper, I have to say Thai people are still really friendly, charming even, and their smiles still untainted by that ‘fake’ air that some of our own people put on.. people doing more ‘respectable’ work, so to speak.

We really like Betong – the laidback, stress free and relatively clean roads. The unpretentious people. The Betong crossing has probably the least traffic and stress and is really rather scenic. Two dozen people or so at the immigration check point vs. 500 people at Bukit Kayu Hitam one means you don’t need to enter Thailand all frazzled and tired even before the fun part of the journey begins!

Betong, meaning bamboo, is named in the Malay language. It is administratively divided into 4 areas, i.e. Yarom, Aiyerweng, Tanah Merah, Tan Namtip, and one municipality – the Tambon Betong Municipality.

With a population of around 50 thousand, which can be classified into two major groups Muslims and Chinese, the majority of its people are agriculturists. Climatically speaking, Betong is under the influence of the Southwest and Northwest monsoons. Therefore, there is a lot of rain and the weather is nice and cool with fog in the morning. This is perhaps how it got is name – ‘A Town in the Mist with Beautiful Flowers’. 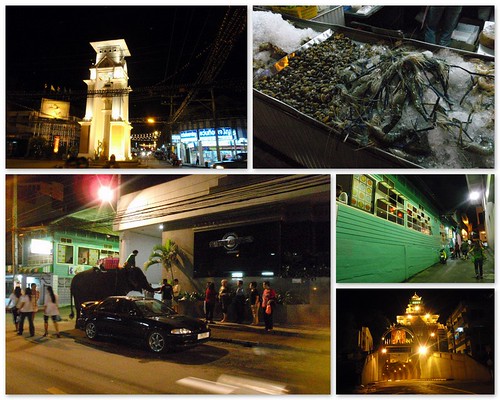 Despite the recent and ongoing troubles you hear in south Thais, we feel (and so do a lot of foreigners!) that it is still pretty safe. Once you pass Betong and meander along towards Yala and to Pattani , you will see the Thai military dressed to the nines, complete with hand grenades, riffles and bullet proof vests, everywhere. These military checkpoints come up every hour or so … initially it was a little bit unnerving but we soon got use to it!

However, THAT is a different story altogether and you will have to tune in again to see , who had the GUTS to take a photo with the MILITARY BOYS… Cumi or Ciki?

(Place bets now. Winners can take us out to dinner 😛 ahem!)

I had so many questions on Kong Kee on my IG feed,  I just had to get this post out. One of the best…