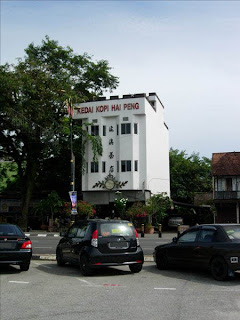 Hai Peng Restaurant, Chukai. During a work trip to the Tanjung Jara Resort, I stopped by Chukai, the popular bustling town of Terengganu – I couldn’t help but think… “Then and Now”.

A quick web search mentions the town as a former taxing center, during the colonial days, for floating vessels using the Kemaman River and hence, its name derivative, Chukai. I haven’t stopped by this bustling small town for at least 5 years. It has gotten busier… many new buildings have sprung up with vibrant wall colors and patriotic banners and lighting. You know a small town has caught up with modern times when two way lanes become a single lane traffic to ease congestion and you have to pay for parking!!!

It was morning and I had spare time to catch a little breakfast…hmmm, why not at the overly hyped up Hai Peng coffee shop, since I didn’t have time to wander around on foot to uncover new joints. I was also considering that Hainanese Chicken Rice place but didn’t think they were open just yet. (the story continues below , see “The Returning”).

The parking system was new to me. Just opposite Hai Peng building, the parking meter serving the area requires the driver to punch the number found on the parking spot before dropping in coins. Needless to say, this big city chimp didn’t know how to work the Terengganu ‘thing’ and started doing the KL ‘thing’ by punching the number plates then putting in coins…. I think I must have donated to half a dozen parking meters before realising the correct way to do things. (chimps don’t read the instructions listed!).
I’m not a big coffee drinker nor a small coffee drinker since caffeine (especially of the gourmet variety) keeps me up till the wee hours of the morning. Oh, what the heck! Since I’ve got to post something on the famous Hai Peng coffee, I called for a cup of ‘Kopi-Ping’ (iced coffee with condensed milk) and selected a pre-packed nasi dagang from a platter of snacks and breakfast food in the center of the shop. 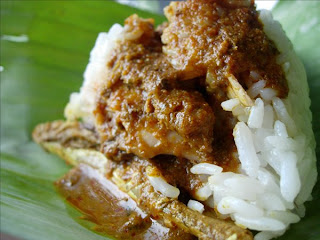 The nasi dagang was very tasty with 2 slices of fish (mackerel variety??) topped with fish curry. The glutinous rice was well formed, chewy but not mushy. 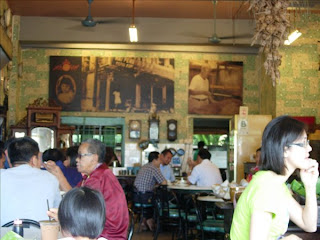 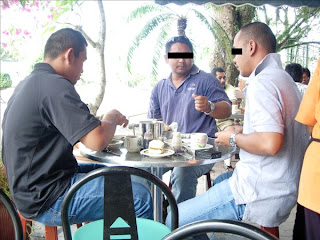 This place was jumping! (to lend a chimp term) All walks of life filled the seating area. Malays, Chinese, Indians dan ‘lain-lain’ were soaking up the atmosphere at 10am (don’t they work…?). 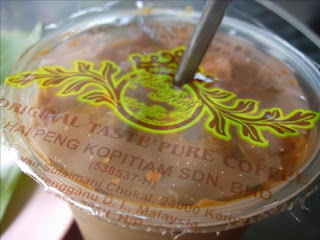 The iced coffee came in a transparent plastic cup secured with a branded plastic wrap on top. Very new age. They must be exporting these ice coffees somewhere. The taste? Not bad. Smoother than your regular kopitiam coffee without the sourness that’s sometimes evident from strange brews or roasting ingredients. 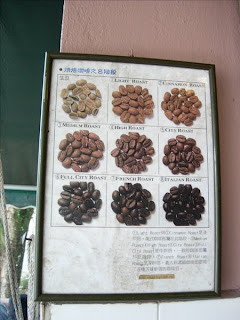 Hmm.. I wonder how much of these roasts are part of its secret brew? If there was anything to complain about, it was the pricing. For this ice coffee and prepacked nasi dagang, it was a staggering RM4.50! In KL, you could have your favourite Ramli Burger and a can of coke with spare change left over.
Why so expensive? The rich folk tagged to the petroleum rich state? There wasn’t any air-conditioning, portions were small and the family probably owns the entire 3-story building (they probably collect good rental too).
MSG: low (a general assumption, since I didn’t eat the other stuff)
Ambiance: 5/10
Price: high side
Nostalgia: 6/10 – (a bit too modern/commercialized a setting. The cashier area had stacks of food stuff glaring at you to purchase) 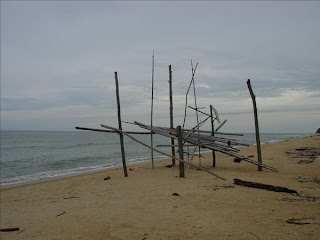 Upon my return, I drove along Dungun beach to check out the lovely scene (ideally, it would have been in a Ford Mustang convertible, any year – for effect that is…;P). There were snack shacks peppering the beach road. Some bright pink, some shanty. No blaring sound systems or modified mufflers or screaming children. Just a pretty, scenic drive in cool, slightly overcast weather. 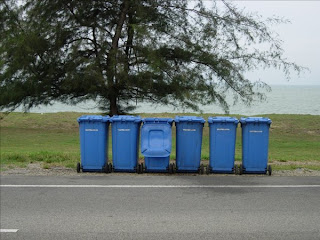 Then there were these blue Tong Sampahs/Dustbins standing upright in an otherwise ordinary day. 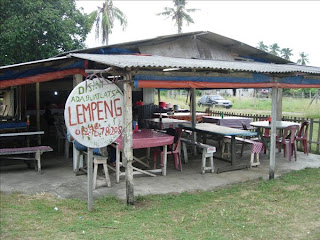 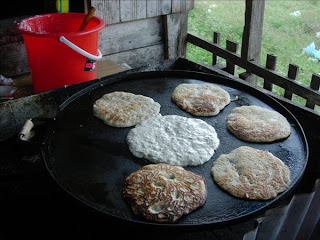 A shack with a Lempeng sign caught my eye. Ciki had written about that nice Lempeng served at Haslam’s KL,(near Tawakal Hospital KL) and I wanted to check out the one here. Sadly, it was a different type of Lempeng – flour and desiccated coconut eaten with overnight (overweek?) curry (pretty yucky) – after 2 bites I reached for the bottle of saccharine sweet, tangy, ‘Made in Terengganu Chilli Sauce’ instead. It was much better than any chilli sauce I’ve eaten in KL (Oh yeah, east coast baby!). To wash it down, I ordered air Nyiur/Coconut water. I regretted not asking them to serve it kosong/without sugar. It was too sweet and watered down. What happen to all that freshness and in abundance, of Kampung food?Back on the road, I passed by the newly opened Mesra Mall on the way back to Chukai.Friday is East Coast’s break day and it’s eagerly commemorated by the Mat Rempits revving up wild, in the big town (that is Chukai). It’s like TOOO FAST TOOO D*MN FURIOUS TERENGGANU HEAT! ..minus the pounding ghetto beats, designer clad macho muscle men/punks or scantily clad hotties.. just your ordinary kedai bengkel/mechanic, factory worker, office/bank clerk and odd job worker living their extra-ordinary lives. You could see different clusters of gangs along the stretch of the main road checking out the competition’s whine & grind. It would have done justice to this write up with an illustrated picture but you just have to trust my descriptive words.As I needed petrol, I drove into the town and since I was in town I thought I’d stop by the Hainanese chicken rice restaurant, Kim Wah which I felt was one of the best chicken rice I’d ever tasted, almost ten years ago. The amazing thing is that it’s halal too. 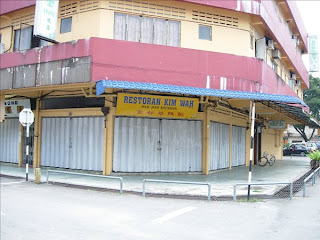 “Back in the day” I had visited this coffee shop, in the Ramadhan month seeking a better and more affordable lunch than my over-priced hotel. Most eateries were closed except Kintowah/ Kim Wah Restaurant (We returned the following night for that other famous stuffed crab & lobsters restaurant, but that’s another story altogether). Anyway, just my luck – the shop was closed and I couldn’t validate whether the quality and taste was just as good as the first time. It’s odd that to date, I haven’t found any other blog/flog expounding the good taste offered at this shop. Well, if anyone decides to swing by, do try it and tell us if Kintowah chickens are still as yummy.. We would really love to know!

*This Roadtrip was experienced and written by CUMI… the masculine half of Cumi&Ciki.  Please also see www.whoa-adventures.com for more information on tourism in Malaysia.

You won’t believe it but Putrajaya is supposed to be to Malaysia, what Hamburg is to Germany. I mean, though it is a much…