With bubs in tow, we head for ‘cuti-cuti Malaysia’ and last week saw us exploring gastronomic capital of the north, Penang

With so many great hotels to choose from, how does one really pick?

Well, this time round we decided to meander away from the big names and look towards the more charming small luxury hotels instead. By small, I mean 35 rooms or less.

Cuti-cuti Malaysia translated as ‘to have a Malaysian holiday’ is a local catch phrase popularised by the tourism board years ago meaning to explore local Malaysian destinations which has now a popular lingo for the locals. 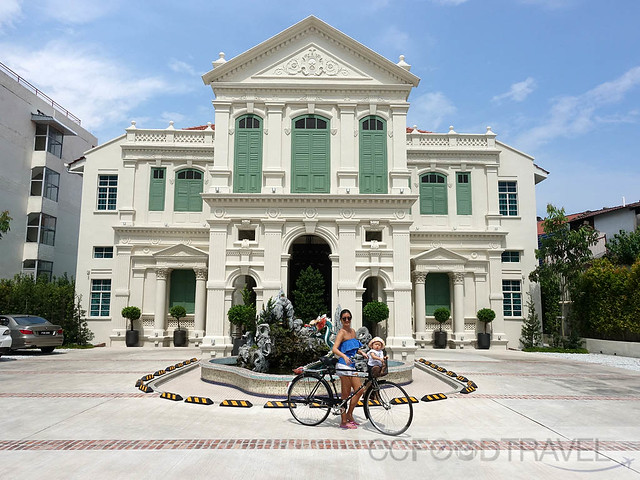 And so we found The Edison George Town, Penang. Since it came highly recommended by one of our friends who is in the hotel furniture business, we decided to check it out. As it turned out, the Edison was pretty as a picture. 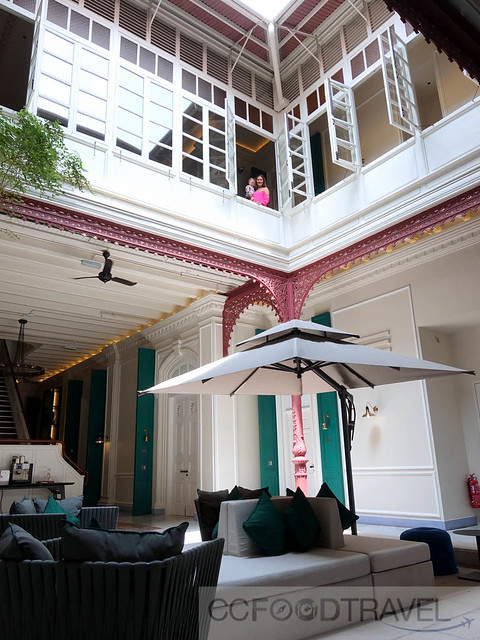 This boutique luxury hotel is a 20th-century mansion restored in gorgeous Art Deco detail, marrying contemporary with the classics. Stepping in there was like stepping into some rich man’s mansion and we weren’t far from the truth actually because it actually used to belong to a rich tycoon. Well needless to say, we fell in love with the place almost at once. 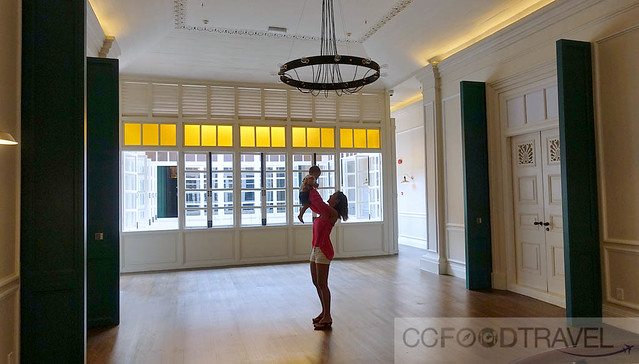 The building itself was commissioned and built in 1906 as a residence for a tycoon named Yeo Wee Gark. It was designed by an architect named David Nathaniel, and was only converted into a hotel after the Second World War. During the Japanese Occupation of Penang, the building was used as their administrative centre. The grounds are atypical of a tycoon’s place of dwelling, housing the main residence and an annex for the servants’ quarters. 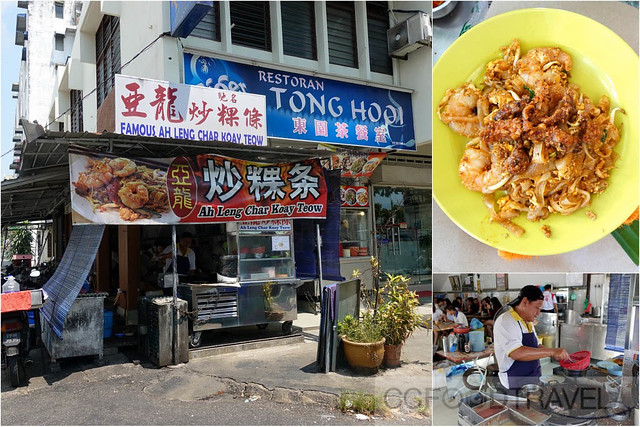 Located on George Town’s World Heritage Zone, The Edison is close to a lot of great food places. We were near Dato Keramat Road (Ah Leng’s Char Kwey Teow (CKT)), also Lebuh Carnavon (Tiger CKT, Guangzhou Cake House, Orchien) and Lorong Susu for great Penang hawker food. Most of these places are 15 minutes’ walk or 5-6 minutes by car, and close to plenty of attractions. 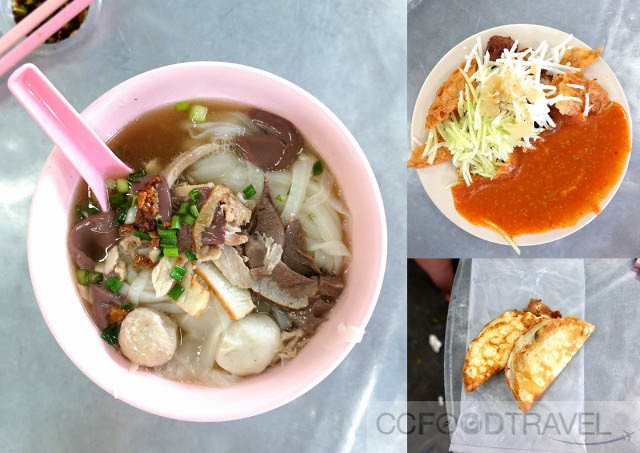 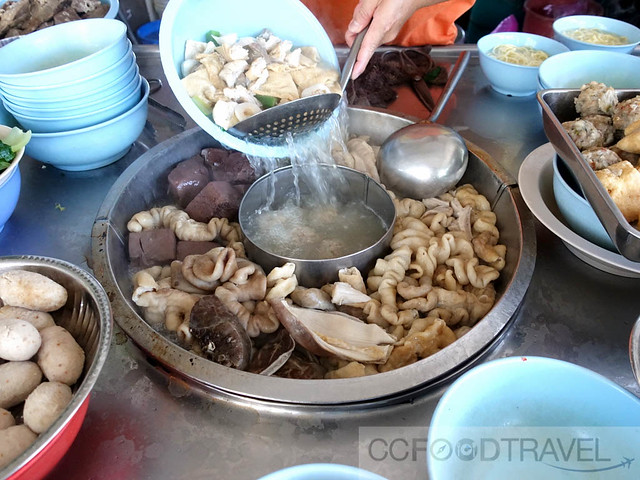 The Edison is also walking distance to Chowrasta. Chowrasta Market is probably the most popular spot to get local titbits such as preserved nutmeg – my MIL sent us on a mission to buy a variety for her, back in KL 😛  There’s also a wet market selling meat and vegetables, coffee shops and hawkers just outside the market – a great place for Penang’s most famous breakfast offerings such as Kuih Kak (Fried carrot cake), Penang-style chee cheong fun, and Kwey Teow Teng (Rice Noodle Soup). 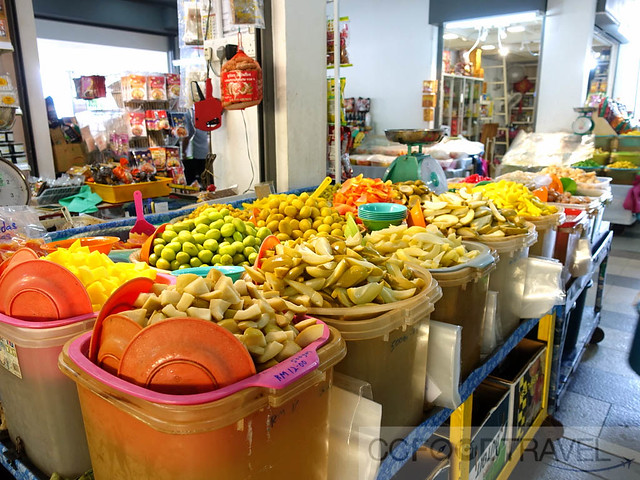 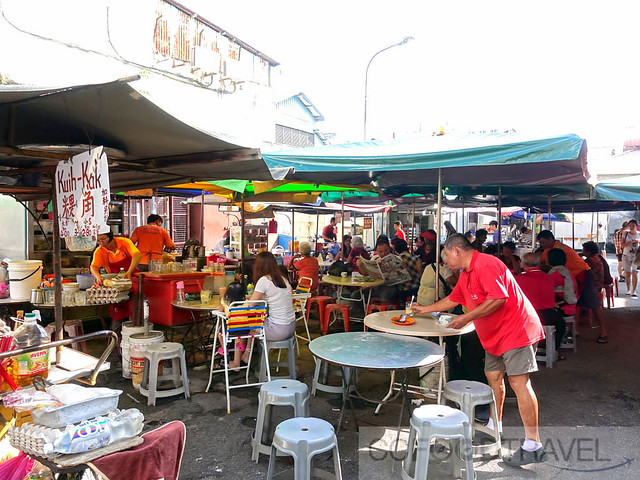 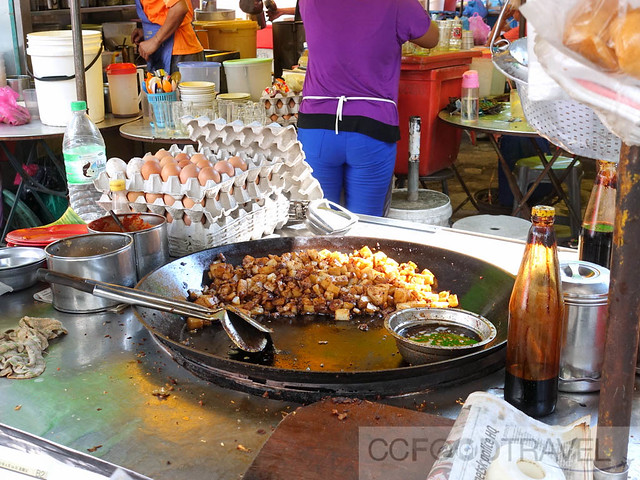 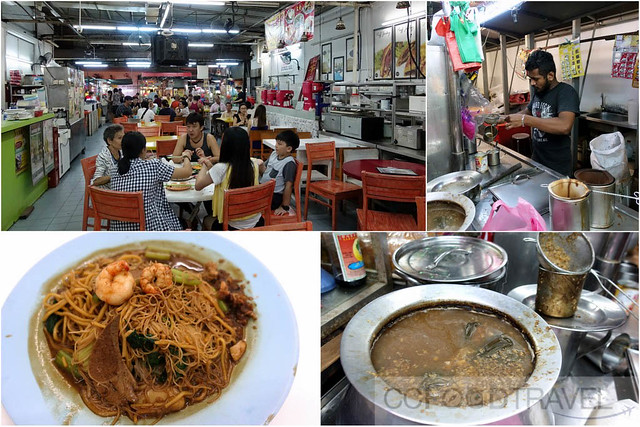 Walking distance from The Edison – at night we visited Lebuh Kimberley(Left) where we tried the Hokkien Char , followed by Chowrasta’s famous nightcap, Ginger in Fresh Cows Milk drink (right).

At night, when Chowrasta closes, the Indian Muslim stalls on the sidelanes come alive. Here, we would savor a glass of fresh cow’s milk spiced up with concentrated ginger juice – the most spicy ginger in town apparently, so we were told. There’s a Lebuh Kimberley for night hawkers, and we tried the hard-to-find Hokkien Char – a braised egg noodle dish infused with prawn and pork flavors – but it was rather disappointing. 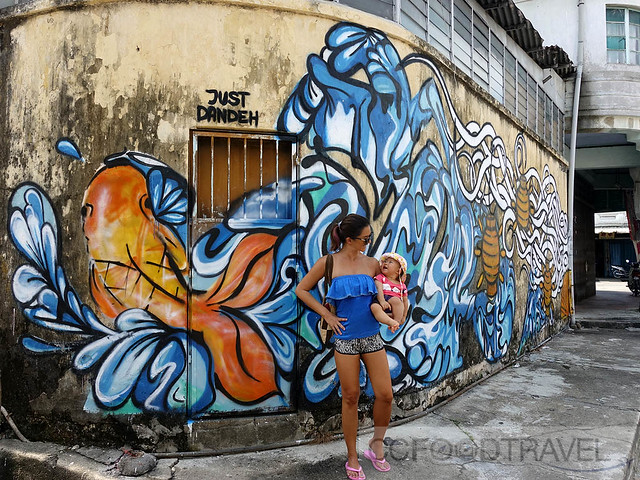 Georgetown that’s a UNESCO World Cultural Heritage Site has a few interesting places you should explore.

Cheong Fatt Tze Mansion – Built on the principles of Feng Shui, this beautifully intricate Mansion, located just opposite The Edison, was once the abode of an influential Nanyang industrialist. It’s a beautifully-restored 18th and 19th-century Chinese architecture. The building happens to be one of only three traditional Chinese mansions left outside of China. (Open 11:00 – 15:00 (when a guided tour is conducted) everyday)

Khoo Kongsi – Kongsi or ‘clan halls’ are basically family houses within the Chinese communities; each clanhouse acts as the central point of the community. (Open 09:00 – 17:00 daily)

Penang Botanic Gardens – Also known as the Waterfall Gardens, this 30-hectare park is a parcel of green land with an admirable variety of flora and fauna. (Open 05:00 – 20:00 daily)

Love the whimsical, old meets new vibe of the Edison – the original structure has been restored, and original details such as the open-air courtyard, unpolished marble tiled floors and Peranakan-style tiles are still in good condition. Some of the doors are a little squeaky though and don’t shut perfect but I suppose that’s to be expected in such an old buidling. However, the décor is freshened with contemporary comforts, bright accents and new furnishings, with an Art Deco design theme. 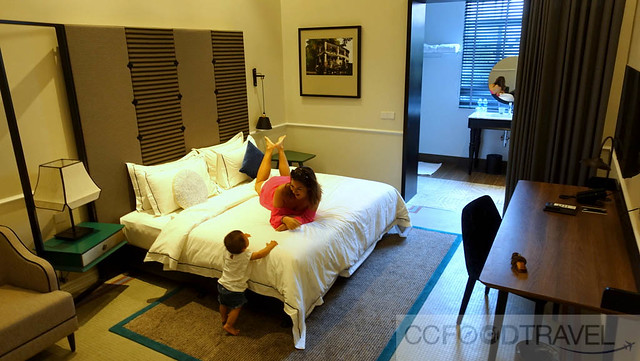 We stayed in the deluxe room and had little to complain about – comfortable bed, not much noise disturbances (it was low occupancy period) but one of the unusual things however was that the room was separated from the bathroom, by a dark curtain. A little strange as it didn’t keep the vapor in, nor the cold air-conditioning out.

Our room’s antique door needed some repairs which we highlighted to the hotel. The wood had expanded causing great difficulty in opening and closing the door. 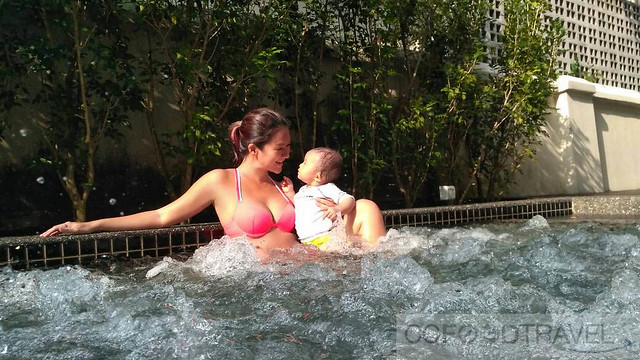 The lap pool and jacuzzi is great for evening pool time with the family. The Edison is child friendly but not quite for infants. There aren’t baby chairs, elevators or ramps. This would also mean, the Edison isn’t ready for physically challenged guests.

To make up for what’s lacking, we had a lot of help and service from the attentive young staff especially when getting our baby food heated or if baby needed a banana. Bubs loved all the attention and smiles from them.

The rather cool thing that the Edison offers is an All Day Pass at RM 35.00 nett per pax for local snacks, coffee, tea, non-alcoholic beverages and WiFi from 11a.m. – 9p.m. 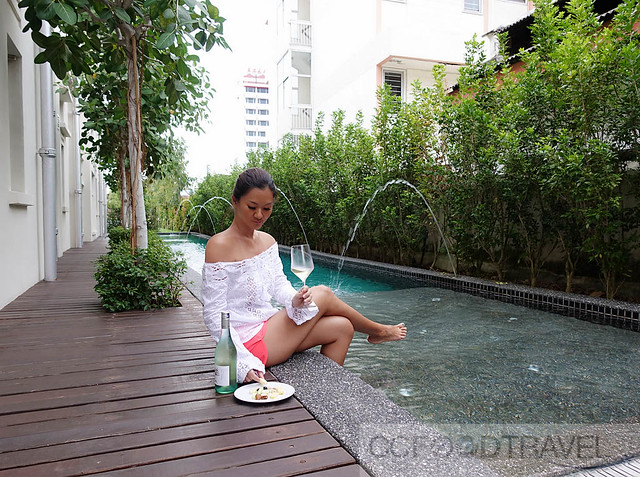 There’s also a Wine Appreciation hour daily from 6-7pm which features some rather cool wines and cheese. An All Day Pass + RM 90.00 nett per bottle. 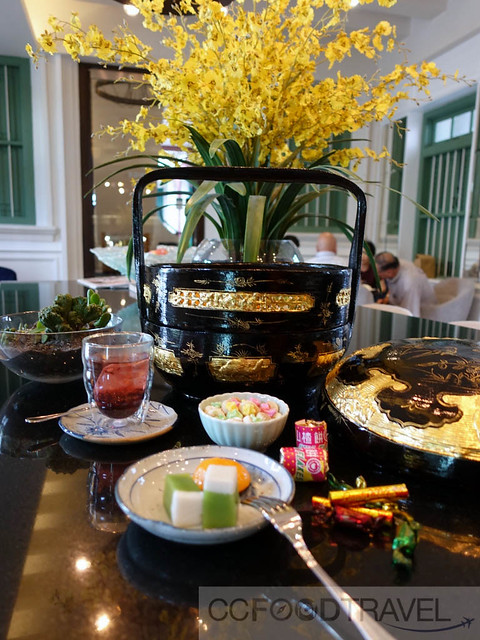 The lounge unfortunately only serves continental breakfast, which is either eggs or packet nasi lemak, coffee and tea. During tea time, nyonya kuihs and/or other Malaysian snacks are served together with a choice of teas. 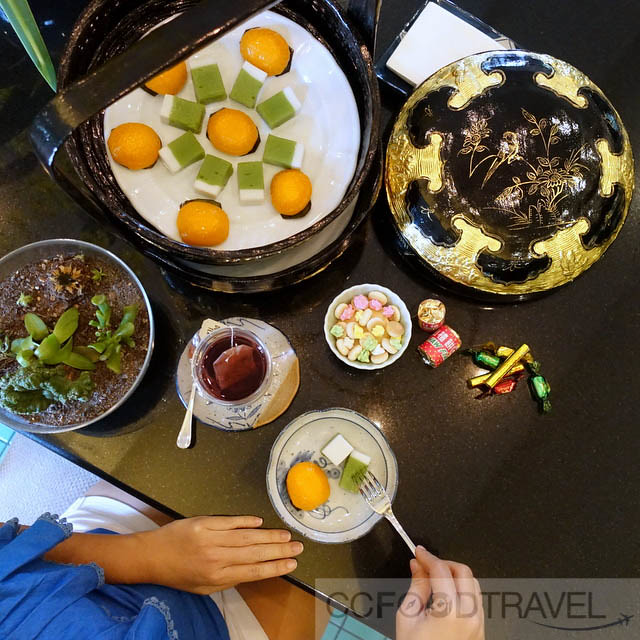 The choice of kuihs during our stay was rather limited though

The hotel has Free Wi-Fi and parking, and the 24 hour pantry offers a wide choice of soft drinks, fruit juices, biscuits, tea/coffee.  Edison is child friendly but if you have a baby, you’re best off bringing your own baby seat/chair, snacks and baby food. The hotel does not have a proper kitchen but the staff will assist in heating up baby food in a microwave.

All in all, not too shabby a time and we wouldn’t have any qualms about recommending The Edison George Town, Penang to our friends without babies. Great location, vibe and service – can’t ask for more.

Being big horror buffs, we recently got our hands on one of George A. Romero’s earliest underrated films that had been recruited for the…