Nasi Padang is probably the best known Sumatran food outside its land.

Its origins are from the Minangkabau ethnic group in West Sumatra. The cuisine is easily found in West Malaysia and some corners of Singapore. It is popular because it is an affordable rice cuisine with 101 tasty mains and side dishes to choose from.

There are, however, many other cuisines in Sumatra that is well-known to Indonesians but less known to the world outside. As we travel more frequently into the vast lands and waters of Indonesia, we discover more and more new food types. Some are new to us. Many have similarities to Malaysian food. Some are a fusion of cuisines we are familiar with. 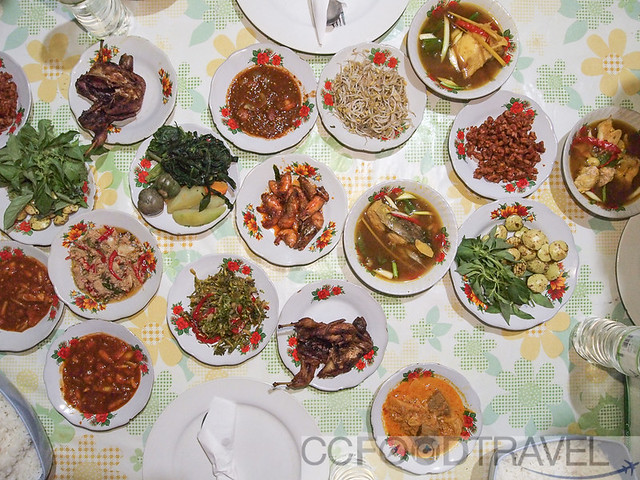 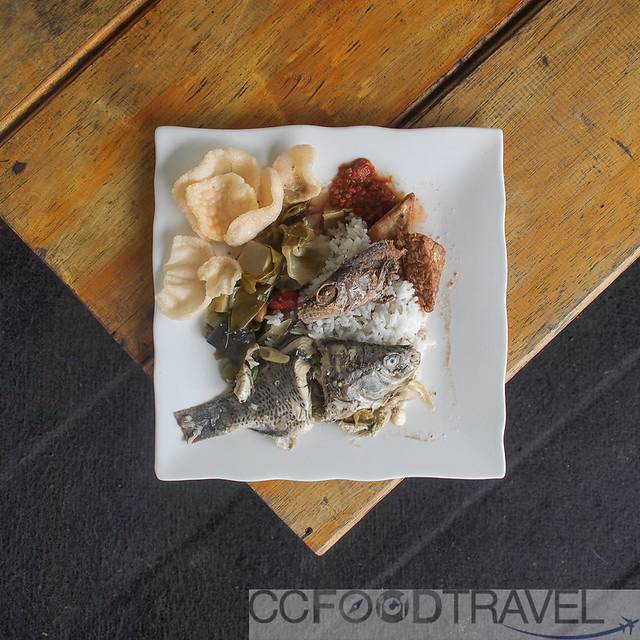 South Sumatra is one of 10 provinces that make up the island of Sumatra, the 6th largest island in the world. In an earlier post, we wrote about 10 unique destinations that you could seek out when visiting this Southern region of Sumatra. Today, we highlight 10 unique foods of South Sumatra as this region is popularly known to the rest of Indonesia as a great culinary destination for traditional food.

Pempek is the most popular South Sumatra cuisine and it is believed to have originated from Palembang. Pempek comes in different shapes and sizes. It is made from fish paste churned from ground ikan tenggiri (Spanish Mackerel) or Gourami freshwater fish mixed with tapioca flour and spices. Non traditional fish paste now includes prawn meat as well. 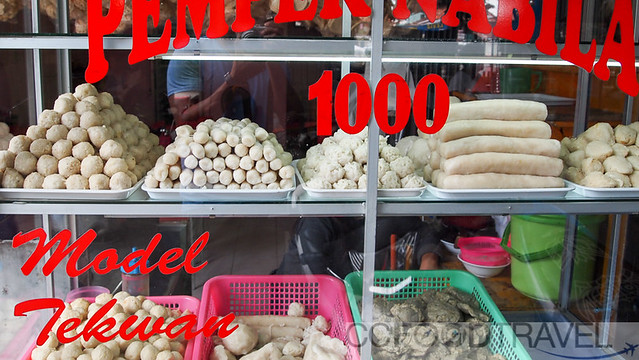 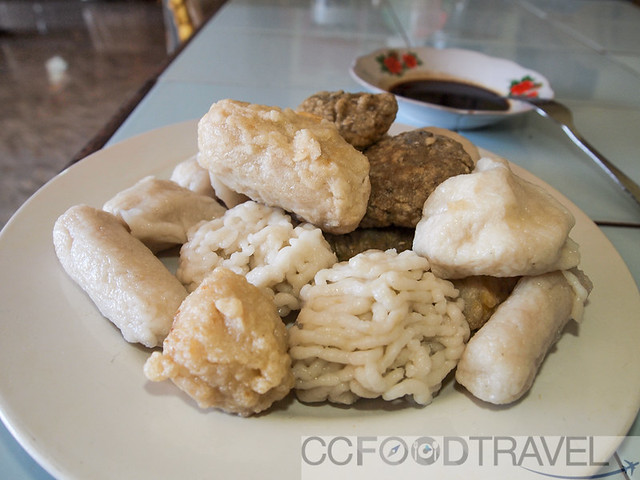 The fish cakes or fish balls are boiled, grilled or fried then eaten with cuko – a palm sugar, vinegar and chili dip. There are different levels of cuko spiciness which can make pempek a fiery dish to contend with. 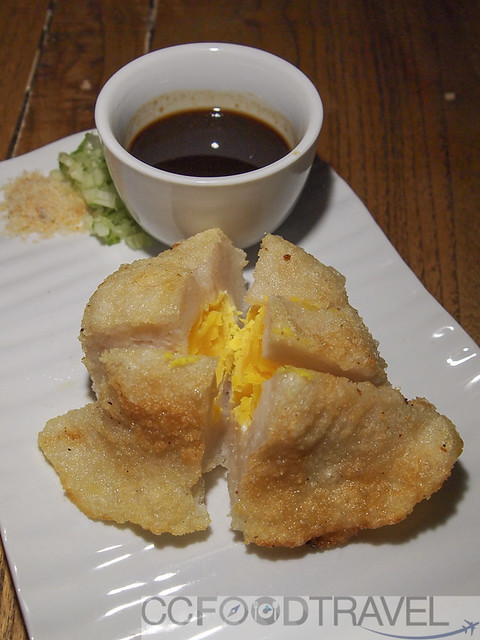 A giant Pempek Kapal Selam – Who wants to live in a Pempek Submarine? 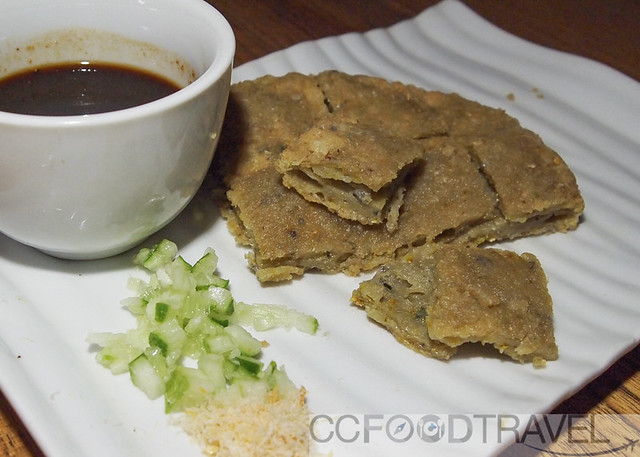 The origins of this dish is distinctively Chinese. If you have eaten chinese fish balls, fish cakes, yong tau foo or chee cheong fun, pempek will be familiar. Even the name, pempek, is believed to have been derived from ‘apek’, a general reference to a matured Chinese male. Those familiar with the usual oriental varieties of fish balls and fish cakes might initially find the texture of pempek too soft, lack the ‘springy bounce’ or having that ‘bite’ which one is accustomed to. 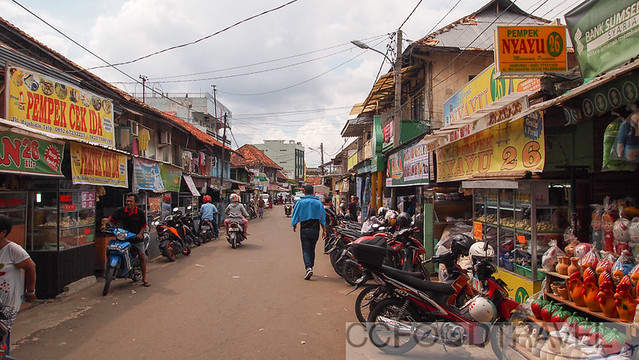 There’s no better place to find Pempek than at Pasar 26 (26th Market) in Palembang where there are enough pempek stalls and restaurants to satisfy a greedy bunch of gluttons.

Pempek can be eaten on its own or it can complement another dish. For example, another famous Palembang dish, Tekwan, has Pempek Adaan (balls) in its prawn based soup with vermicelli. 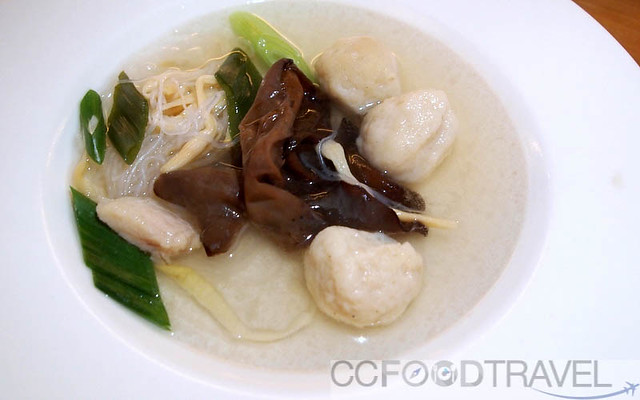 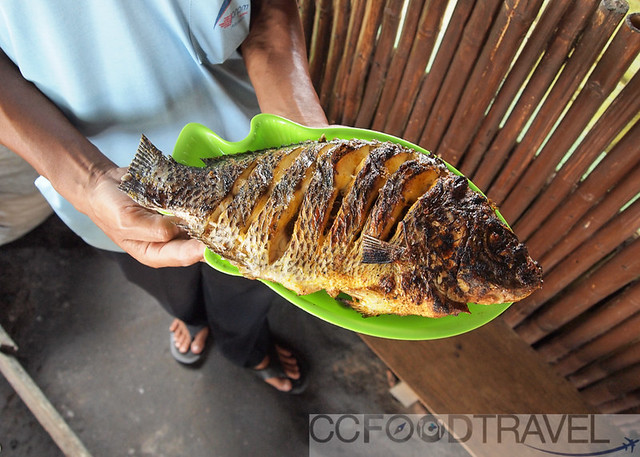 The preparation was simple, just grill it to perfection then eat it with steamed rice, sambal, kecap manis pedas(chili padi in sweet soy sauce) and sup sayur asem(sour vegetable soup). Normally freshwater fishes from a river exudes a sandy taste in its flesh but the fishes caught from the lake tasted clean. 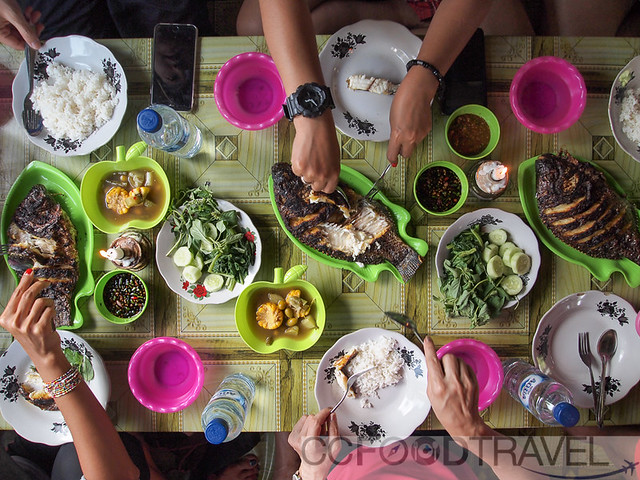 Farm mujair variety is cheaper than wild caught so do check with your waiter before confirming your order. 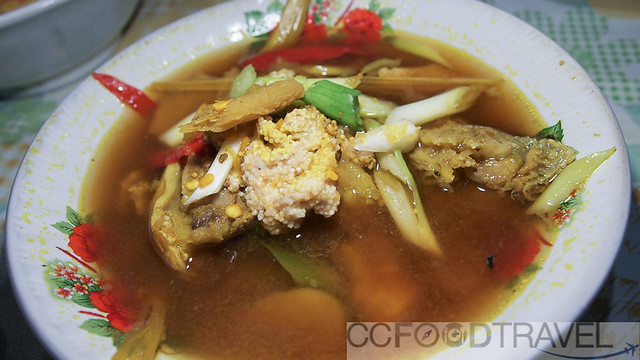 As with any seafood dish, the fresher the catch, the tastier the dish. We weren’t informed the type of fish used but we suspect its a Snakehead Murrel(Ikan Gabus/Haruan) from its firmer flesh. This dish was prepared immaculately with a fish of delicate texture and a well-balanced delectable broth. 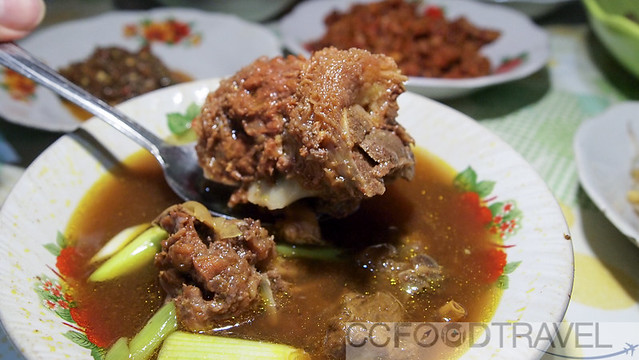 Beef is a bolder meat so the chef must have added certain spices to make a broth a little stronger to complement the meatier ingredients. A toothsome dish with meat falling off the bone. 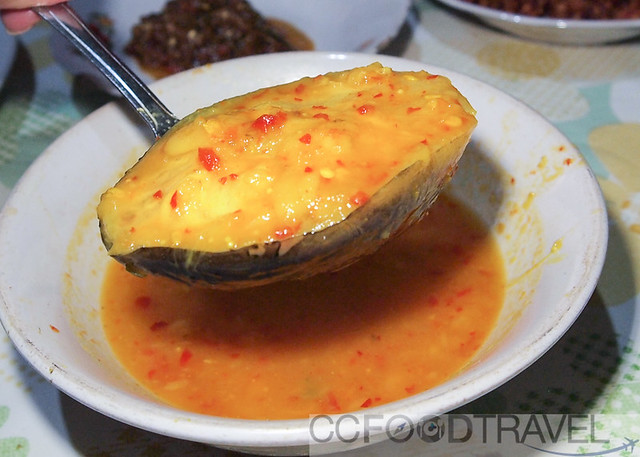 Tempoyak is fermented durian flesh with spices which is commonly used to make curries in the South East Asian region. What makes tempoyak distinctive, apart from different measures of ingredients in the recipe is the type of durian used so tempoyak in South Sumatra has its own distinctive taste from its local durian variety – though the distinction might not be that apparent to general palates. 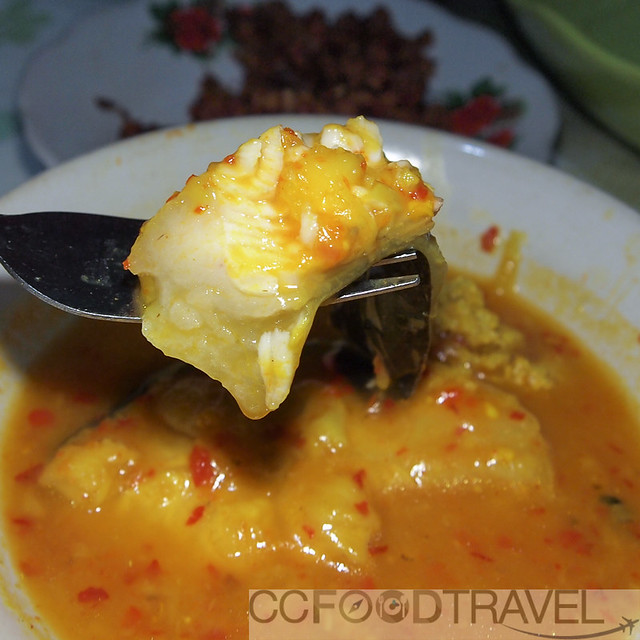 Perfectly cooked flesh of the Patin. Tender and fatty.

Tempoyak, just like Pindang, is a versatile cooking style, you can use any type of fish to cook with it but it is more common to find it served with Patin. 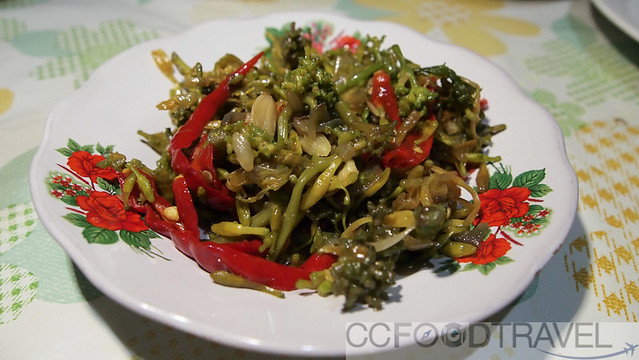 Papaya tree is a versatile plant. It’s easy to grow and bears sweet fruits. The young fruit can be used for pickling. It’s flowers, leaves, seeds and saps can be used to provide relief from many ailments including reduction of high blood pressure and hypertension. South Sumatrans decided to make a stir fry of papaya flowers as a vegetable dish. Its savory and bitter. Not everyone’s cup of tea but certainly a good balance to a heavy oil meal.

Bekasam is a fermented fish dish that is very salty, pungent, fishy and spicy too. It is freshwater fish that has been gutted and cleaned soaked in salt water then mixed with rice and fermented rice (tape ketan) then left to ferment for at least 7 days. The finished product is cooked with spices and chili then served as a side dish to be eaten with rice. 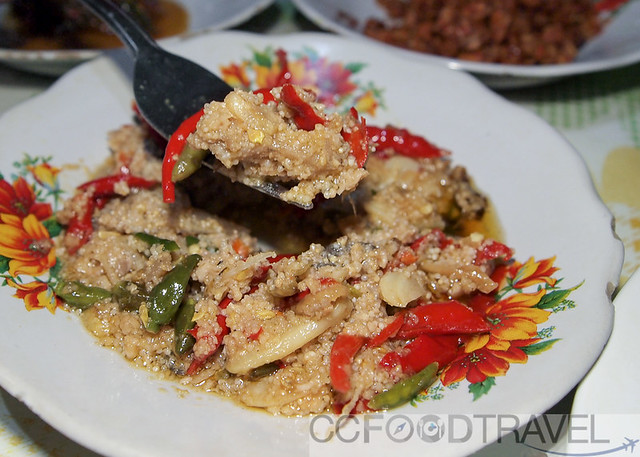 The joys and healthiness of eating a dish power-packed with micro- and macro-nutrients, resulting from the breakdown of protein to amino acids. A wonderful aid to your digestive system. Sounds disgusting? Just don’t say it to your host, haha. 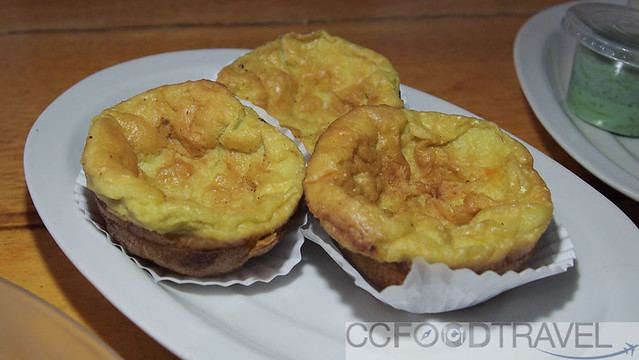 A traditional dessert with key ingredients of glutinous rice flour, sweetened condensed milk, fresh coconut milk and eggs. It more of kue(h) than a cake, having a texture of jello-chewiness, and a taste of sweet coconut and eggs. There are different variations of the engkak. Another popular engkak is engkak ketan which is multilayered and square. Some will draw similarities with this dessert and nyonya kuehs. 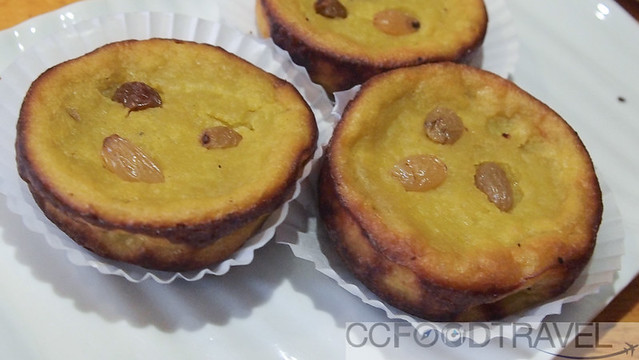 Another traditional glutinous rice flour dessert which is steamed instead of being baked. Usually flavored and colored with pandan and suji leaves, another version of Srikaya is made with fermented rice (tape/tapai) which gives off a pungent aroma that might not appeal to all. 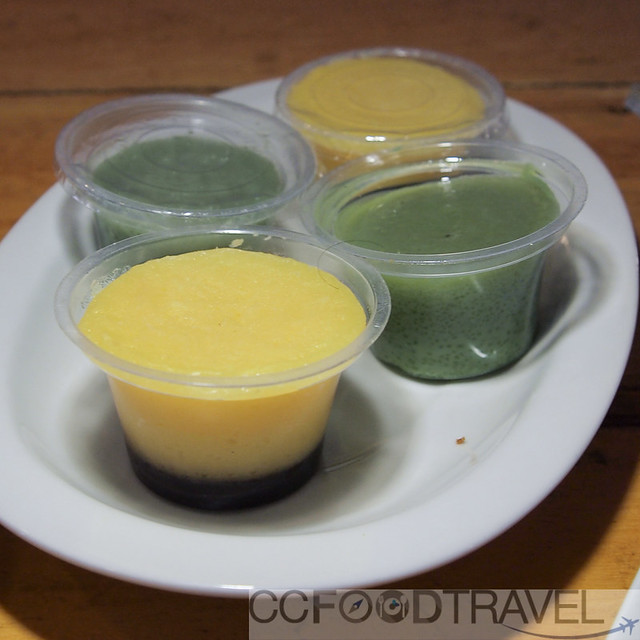 A dessert made of durian, glutinous rice, fresh coconut milk, and sweetened condensed milk. Chewy, sticky, sweet, salty with the pungency of the local durian variety. 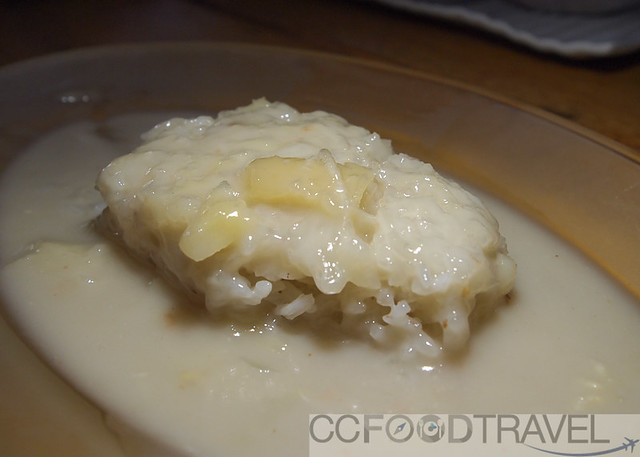 This trip was sponsored by Tourism South Sumatra. CCFoodTravel maintains full editorial control of the content published on this site as always.

Cungdinh Vietnamese Restaurant at One Bangsar – we love this place since it moved to the upstairs of the same building, along the One…