My first lesson in Gelato is a firm ticking off, by one of the locals of Bologna – it ain’t ice cream, so call it what it is. Gelato. 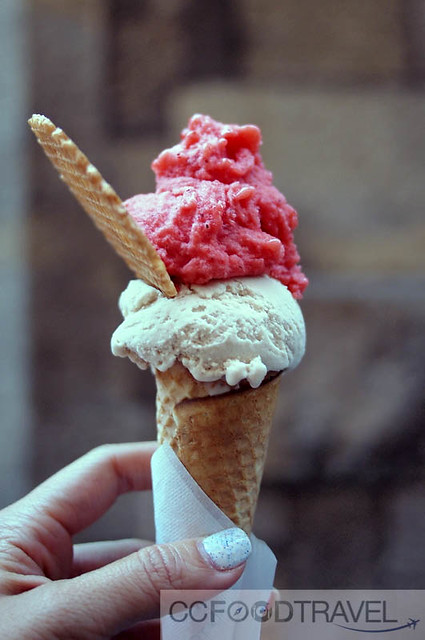 OK, point taken! Gelato it is. 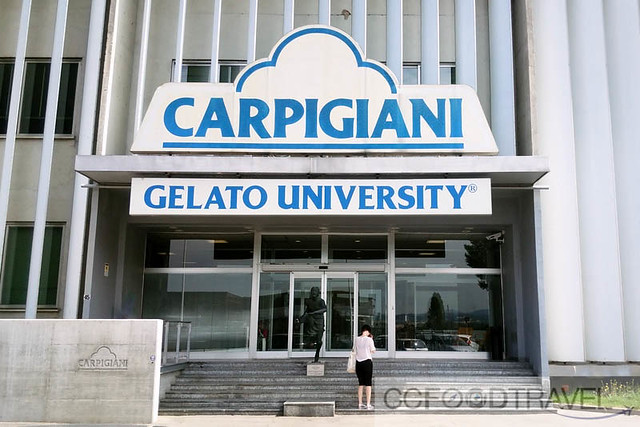 And seriously.. you got to hand it to the Italians for having one of the first ever universities dedicated to the art of making gelato. 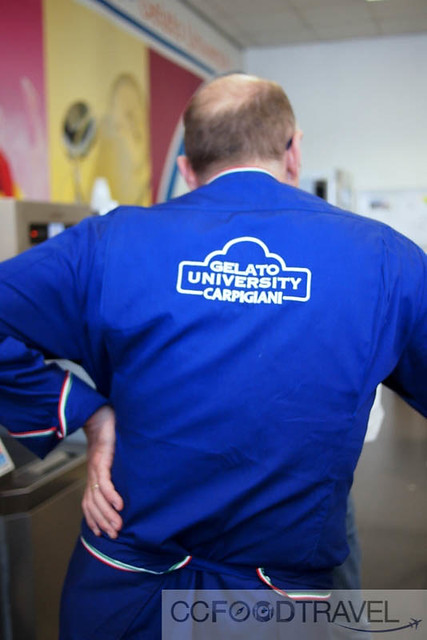 One of the highlights of my trip to Italy would have to be my gelato making class, at the Carpigiani Gelato University, located outside Bologna. A day trip out to Via Emilia, and to the massive Carpigiani headquarters which looked like an industrial plant was a real eye-opener. 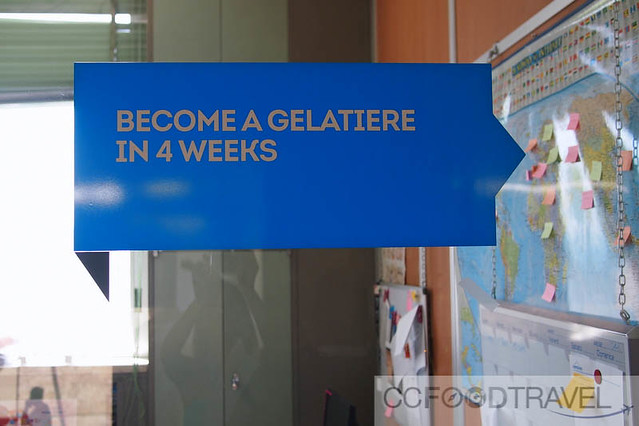 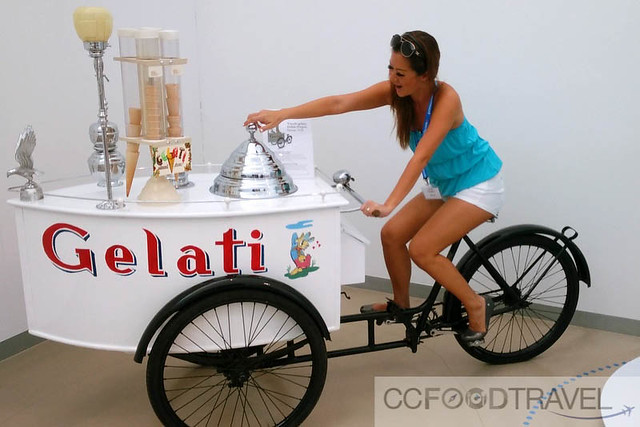 Which kind of makes it a bit suspect that we got certificates and all.. but hey, I’m not one to argue with the University’s finest. If I made gelato, I made gelato. And it was good enough to eat, so there you go! 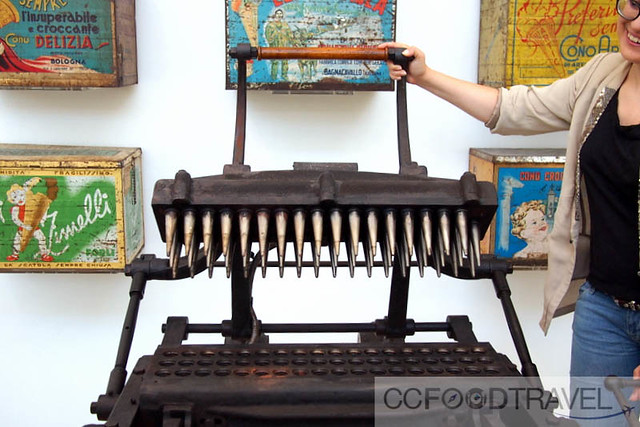 The first thing you learn at the masterclass is that great gelato, is made with the freshest products, and made from all-natural ingredients of the land. Carpigiani has been teaching students since 2003, and they have been making gelato-making equipment even further back, since 1945. 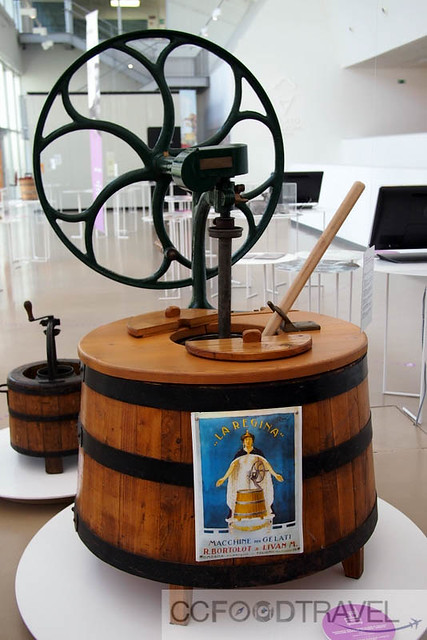 Its courses have attracted students from more than 100 countries, many of whom returned home to open their own Italian-style gelateria. Carpigiani graduates come from all over the world, including France, Germany, the UK, USA etc.. and they even have a campus close to us, in Singapore. 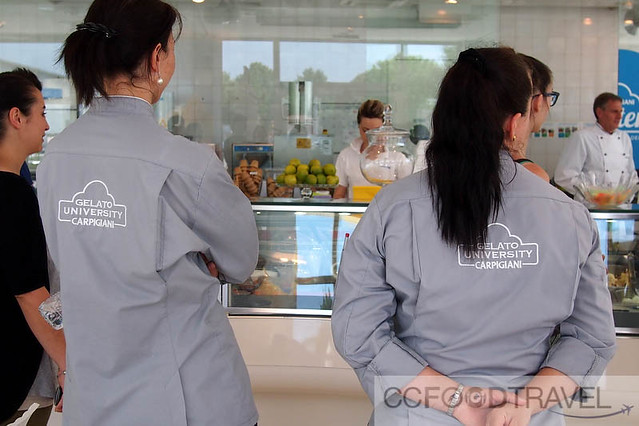 And in case you were wondering, the world is not running out of gelato anytime soon. Talk about world domination – from Sudan to India, Iraq and Iran, everyone is swaying to the gelato rhythm. Enrollment from Asia and South America is booming, while the Middle East ie. Egypt, Saudi Arabia, Israel, Dubai are also sending delegates over for gelato certification. 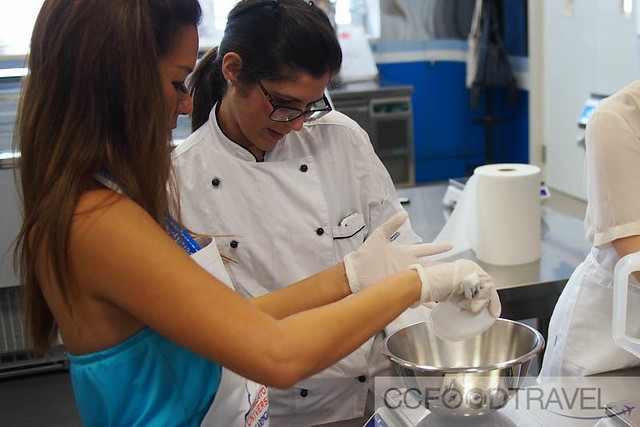 The sterile conditions of the gelato lab remind me of my Chemistry lab in Cardiff in the UK, back in the day. It is so darn clean, the surfaces literally gleam. 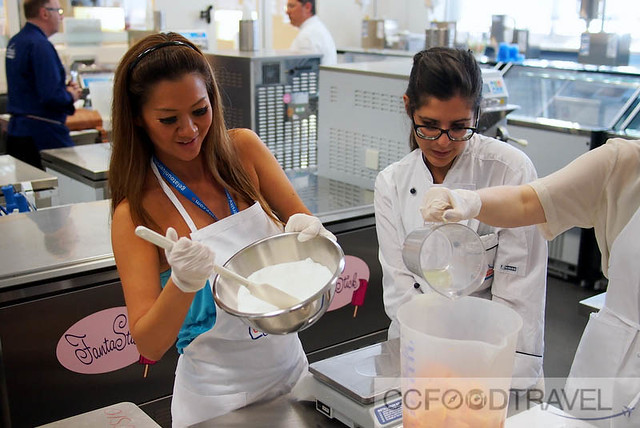 The art of fine gelato making is a precise one. Our ‘teacher’ is pretty strict that we adhere to the rules and that everything from sucrose to dextrose, lemon juice, melon and stabilizer is measured to the decimal. 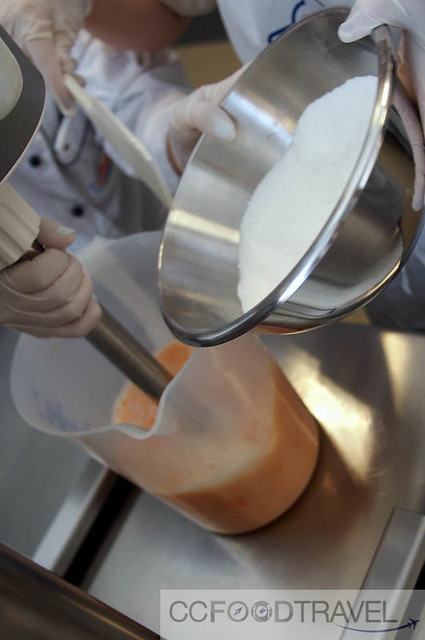 Only then will gelato form like how it’s supposed to. 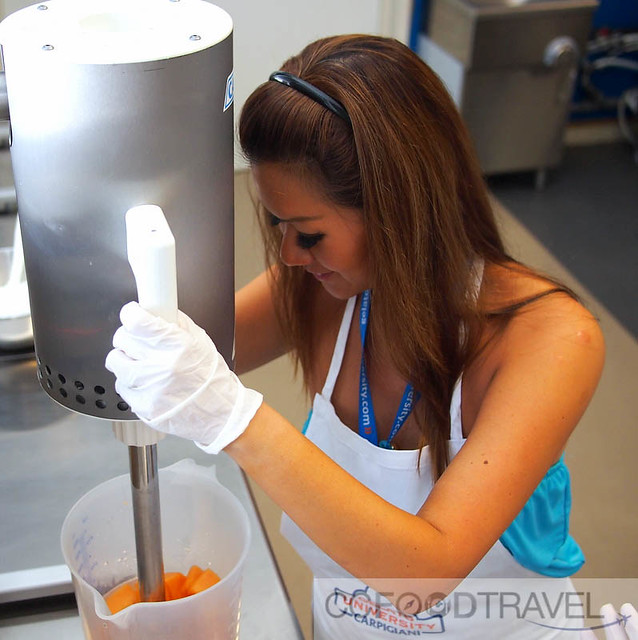 Well, I can’t lie, apart from cutting the melon and weighing out the sugars, the machines pretty much do everything for you. 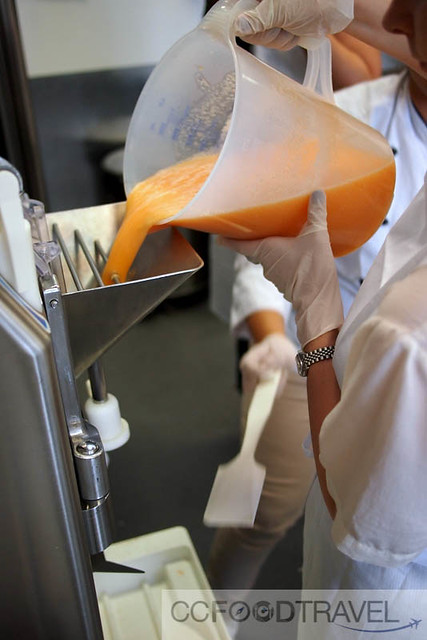 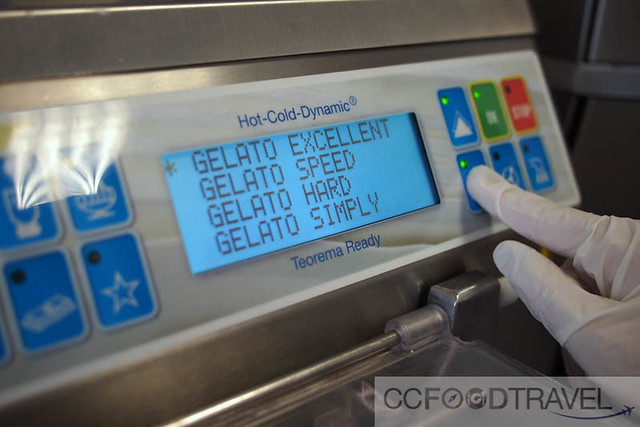 It’s like gelato magic, at the touch of a button:P

Some key points to bear in mind, when making Gelato. Gelato has less fat than ice cream. While ice cream is normally heavy on the cream and has a fat content of at least 10 percent, gelato uses more milk than cream. 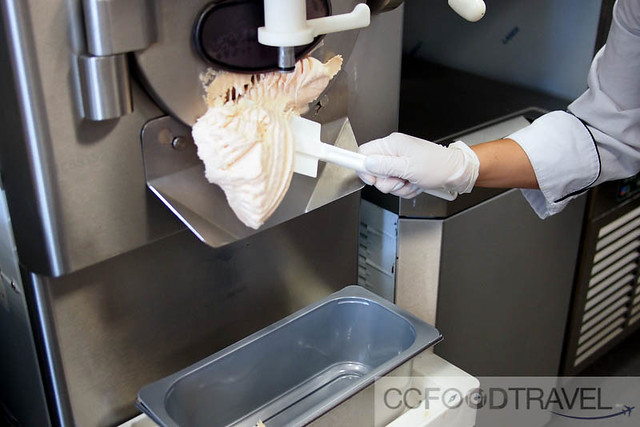 Ice creams are churned faster and harder than gelato. Ice creams typically increase in volume (with air, through churning) by at least 25 and up to 90 percent. This makes them a little fluffier. Gelato is churned at a much slower pace, keeping it dense (and sometimes more flavorful). 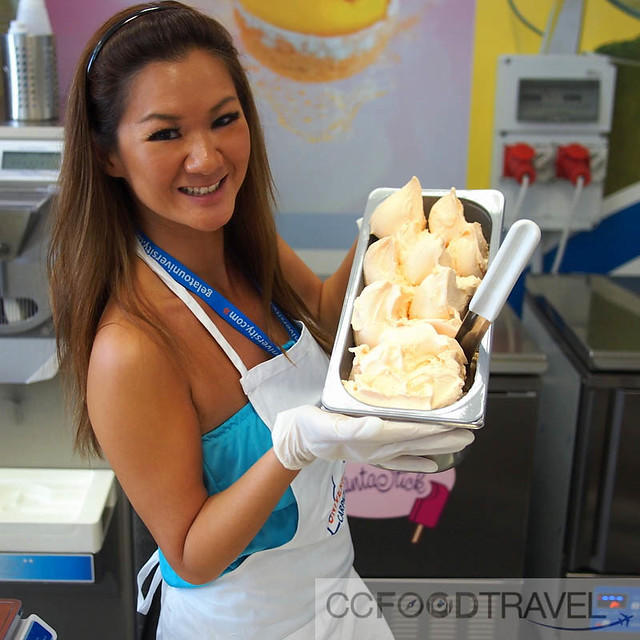 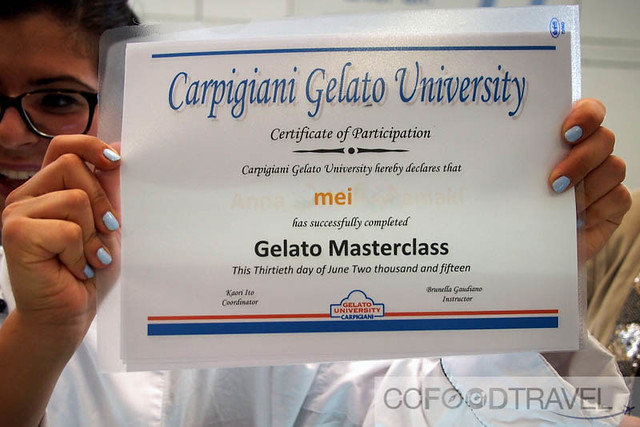 Well well well, if this is the healthier alternative to ice-cream, then I say, bring it! 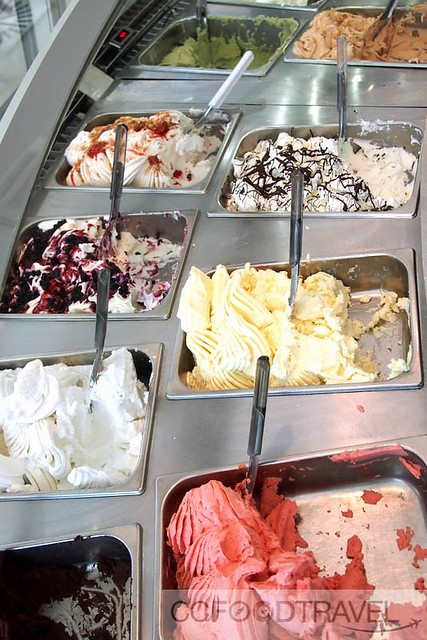 I could eat Gelato forever.  And at the little gelateria at the University, we did just that. 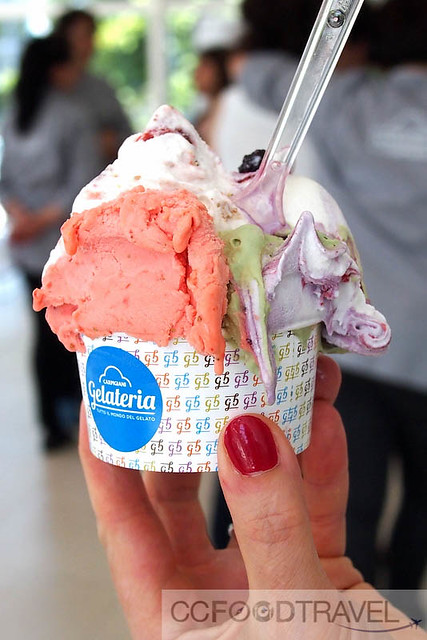 The Traditional Curriculum  – Carpigiani Gelato University’s curriculum consists of six courses, each lasting an average of about four days. Check out their website for more info. 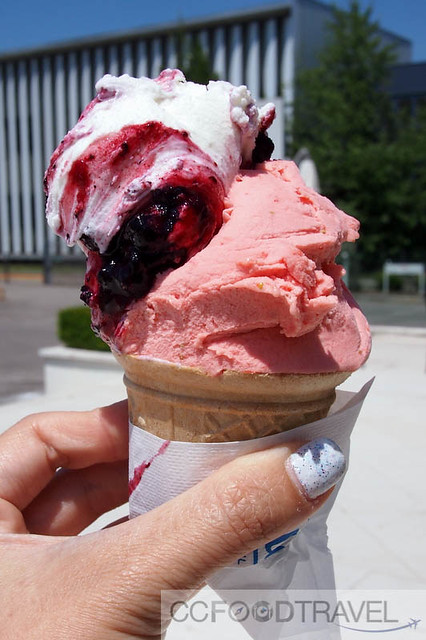