Bahia’s capital is the oldest city in Brazil, and during the early colonial period it served as the capital of the entire country. Situated on the All Saints Bay, this was where Africa met South America, on the northeastern state of Bahia. 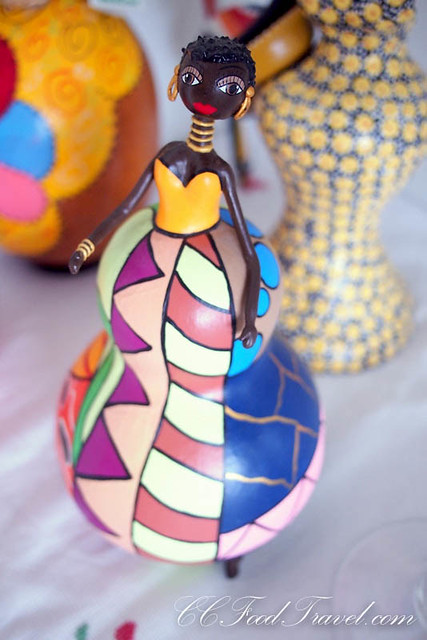 Salvador, Bahia’s centerpiece, was the arrival point for slaves brought to work the sugar plantations, accounting for the city’s vibrant African culture, and bringing with them their equally vibrant cuisine. Brazilians, I am told, love Bahian cuisine. Even more than their own, it seems. 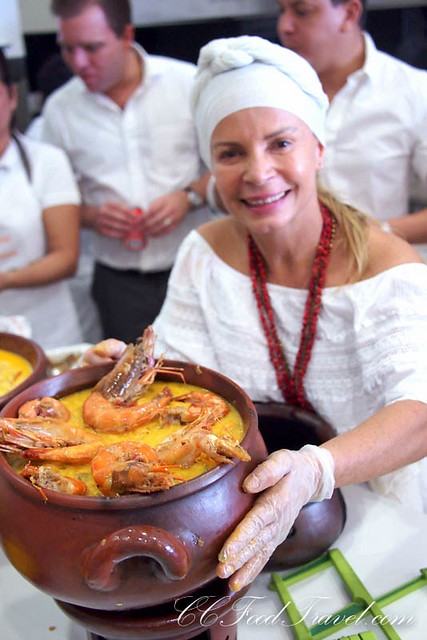 Last week, we had the pleasure of attending a Brazilian Bahia party at our friend, Josefina’s pad, where she had a full fledge Bahian lunch soiree thrown for her guests. As is with Brazilian culture, lunch starts at 4pm.. and doesn’t end till midnight! It was pretty awesome, and with a dress code like white, to show off the Brazilian tan, it was only too easy to get into the South American spirit of things. 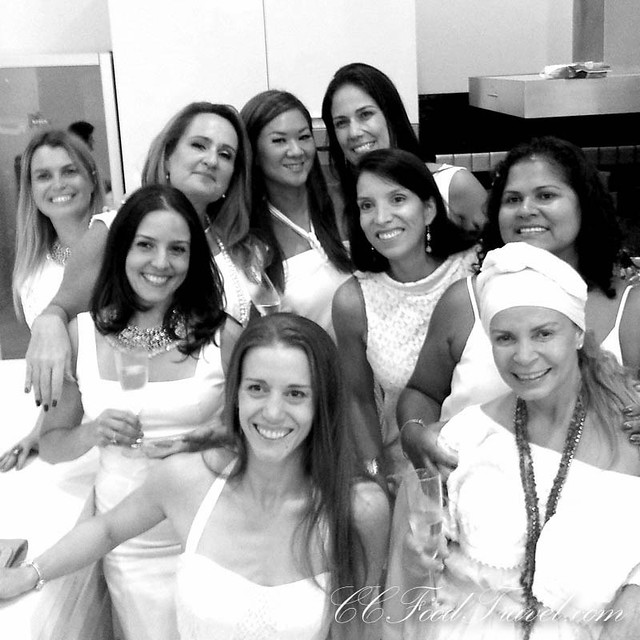 First of all, it is in the Brazilian culture, to ease into lunch. By that I mean, a lot of drinking, and canapes, and more drinking, before lunch even begins.. 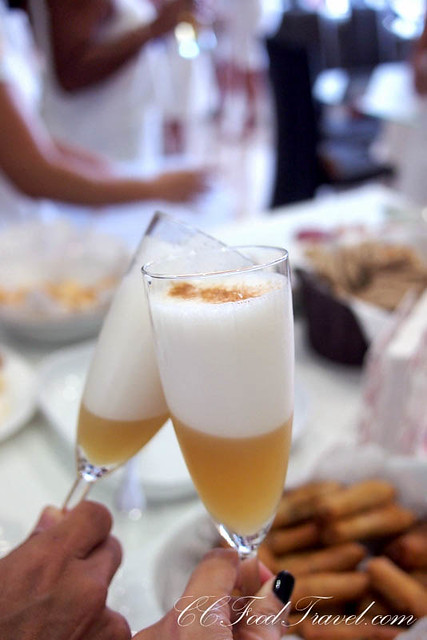 Josefina’s special Pisco Sour – apparently some Peruvian friends of hers taught her how to make their special brew.. two of these, and you might just be floored.. 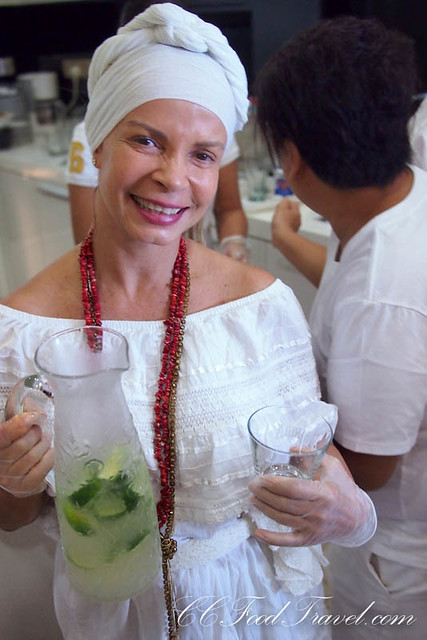 The lovely Edna – Chef for the day, cooking her specialty, Bahian Food.. Here she is serving her caipirinha cocktails 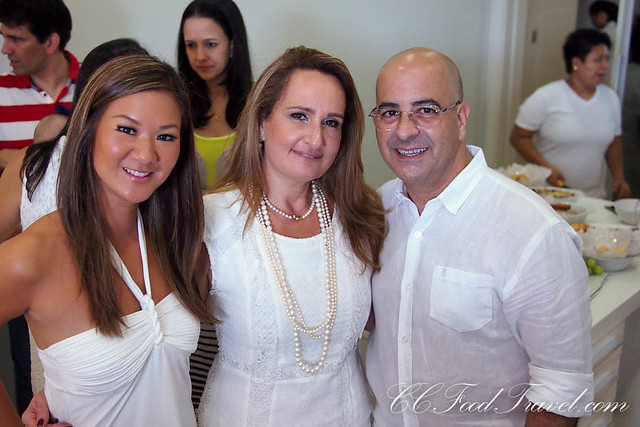 With Josefina and Jose, our hosts. These guys are the best.. fantastic Brazilian hospitality, and amazing people 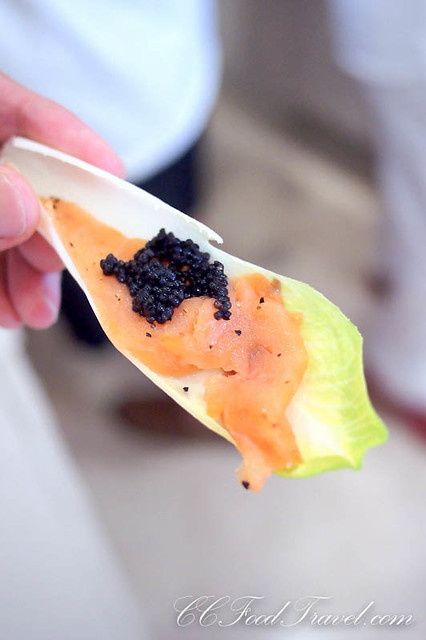 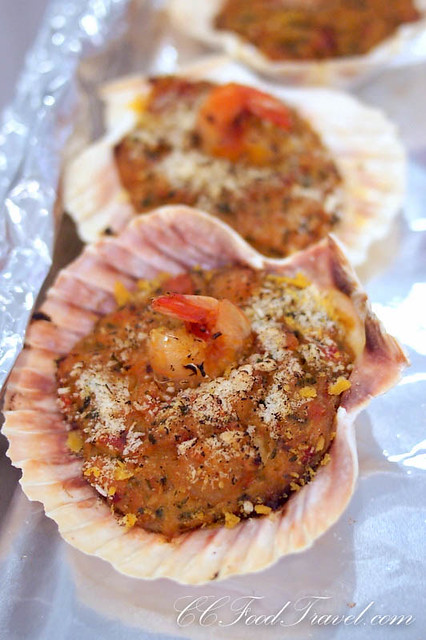 Crab casquinha – Spicy crab meat (cooked in coconut milk, spices, palm oil) served in its shell on the top of sea salt. Served with chili sauce and farofa de dende, this was the bomb! One of the guests actually made this and it was so good. My favourite tapas for the day really. 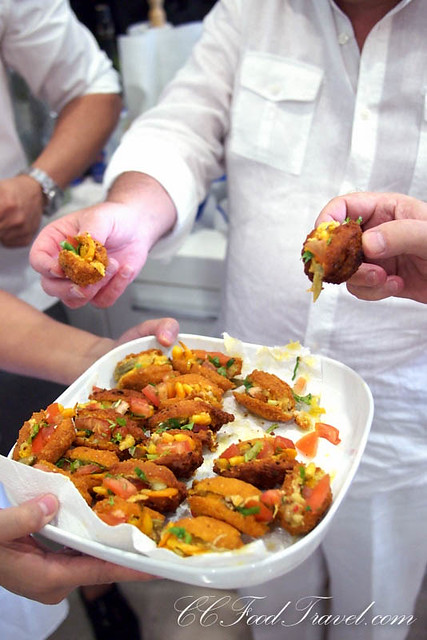 Acaraje is like a Brazilian-style falafel. Packed with flavour and a great source of fibre, the balls of bean goodness are a vegetarian’s dream. These fritters are best served piping hot, topped with mojo de acareje, a Brazilian-style chilli sauce.

Then just when you think you’ve actually eaten a lot, lunch proper is served. 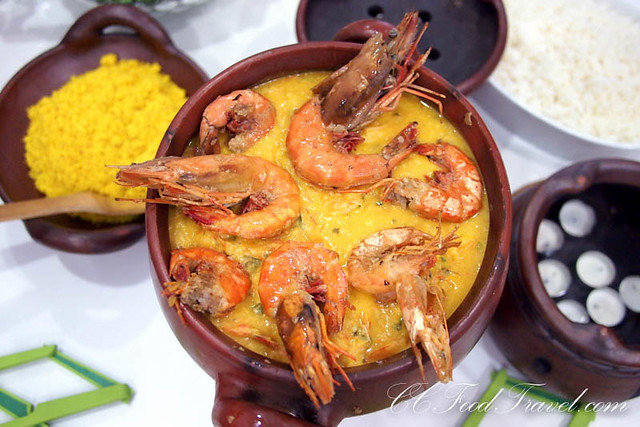 Bobó de Camarão is a classic dish from the state of Bahia is one of the cornerstones of the Afro-Bahian tradition of cooking. It contains manioc (cassava root, or yuca), coconut milk, dendê palm oil and the sweet fresh shrimps for which Brazil’s north-east coast is so famous for. 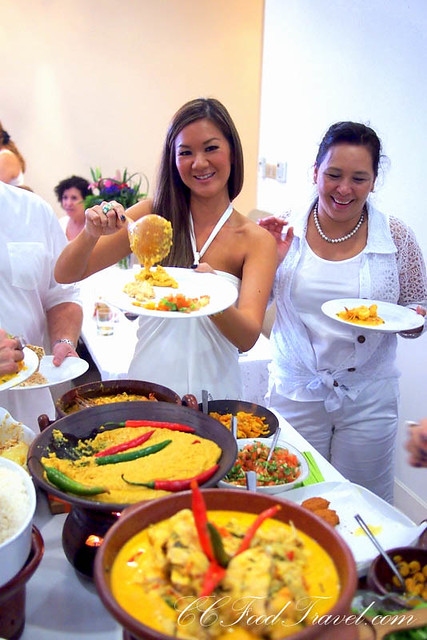 A bobó is a manioc cream or puree, which can be served unadorned or finished with shrimp or other protein. For foodies, going to Salvador or anywhere else in Bahia and not trying bobó de camarão at least once would be a travesty, almost as bad as not trying acarajé while visiting Bahia! The only ingredient that can be difficult obtain, and which is absolutely necessary in a bobó, is the shockingly-brilliant orange palm oil called dendê. That’s why all the dishes are characteristically yellow in color. 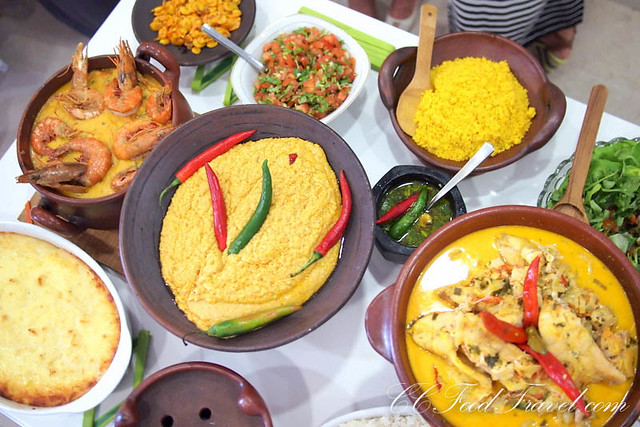 Vatapá (middle) is made from bread, shrimp, coconut milk, finely ground peanuts and palm oil mashed into a creamy paste. This food is very popular in the North and Northeast, but it is more typical in the northeastern state of Bahia where it is commonly eaten with acarajé, although Vatapá is often eaten with white rice as well. 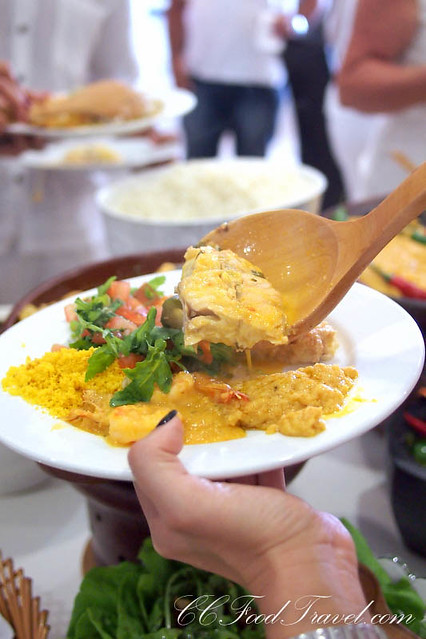 Moqueca is a Brazilian recipe based on salt water fish stew in coconut milk, tomatoes, onions, garlic, coriander and some dendê. Slowly cooked in a terra cotta casserole optionally serve with prawns and choosing by preference a mix of boneless fish species like small shark, sword fish, etc. Moqueca can be made with fish, shrimp, crabs, sea crab or lobsters. There is also a rare variety made with raw bananas. The dish is usually seasoned with onion, tomatoes, coriander, chives, and olive oil. It is usually accompanied by pirão which is the paste made with yuca root flour (“farinha de mandioca”) and the gravy from the stew. 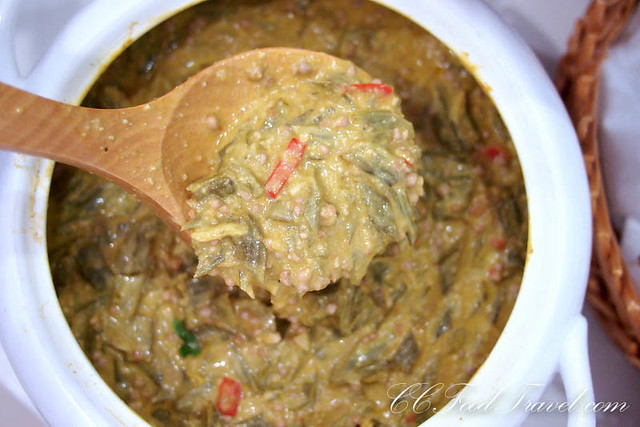 There was also Prawns Caruru – Caruru de Camarao is a Brazilian recipe consisting of shrimp and okra gumbo. It is typical of the Brazilian recipes that you find along the coast. 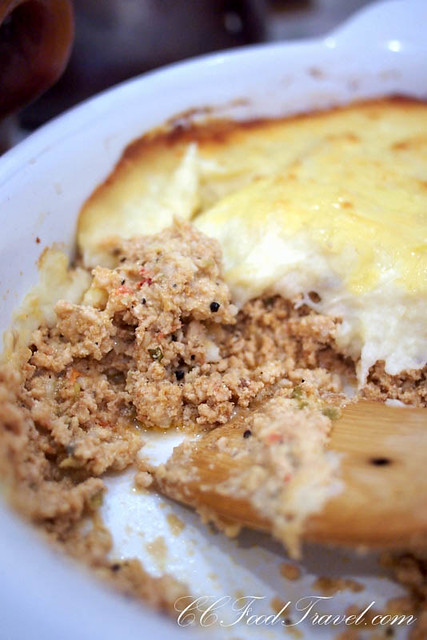 Chicken Escondidinho – some sort of Brazilian Shephard’s pie if you like..

Escondidinho may be made from chicken, charque (a meat similar to jerked beef), shrimp, ground beef, or codfish, among other things. One remains the same though. It is always topped with some super tasty and addictive, mashed cassava or yuca and cheese (mostly queijo de coalho).. Oh my, don’t start counting the calories just yet:) 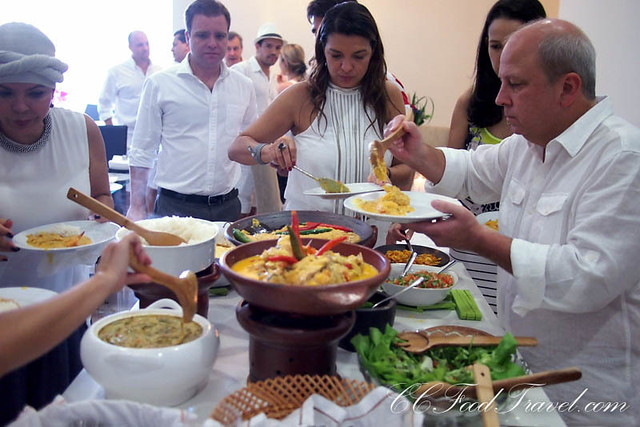 And the feasting went on and on… 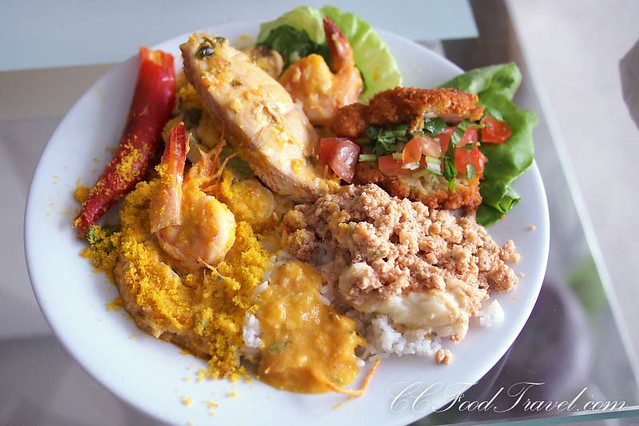 Bahian cuisine is colorful, to say the least. The Palm oil, dendê,  is what gives most of the cooking its characteristic yellow color. 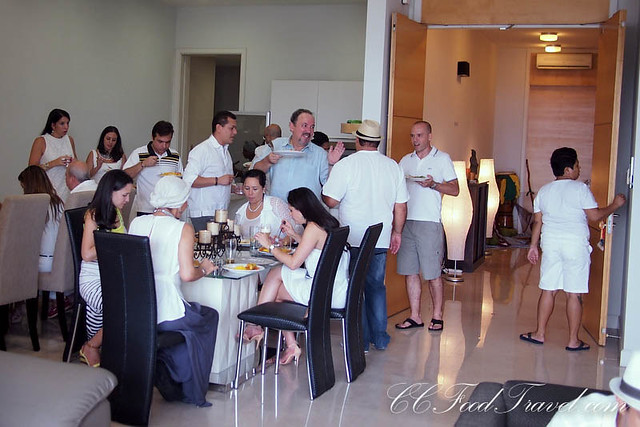 And for the grand finale, desserts as if we weren’t already bursting at the seams.. wished I had more space in my stomach for the delectable helpings of Mouse Passionfruit, Milk pudding, Lemon pie, Pineapple trifle and chocolate ice cream cake. 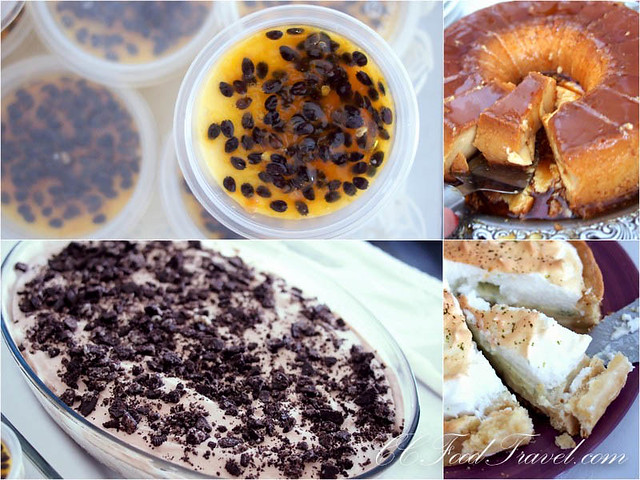 So much great food.. so little stomach! 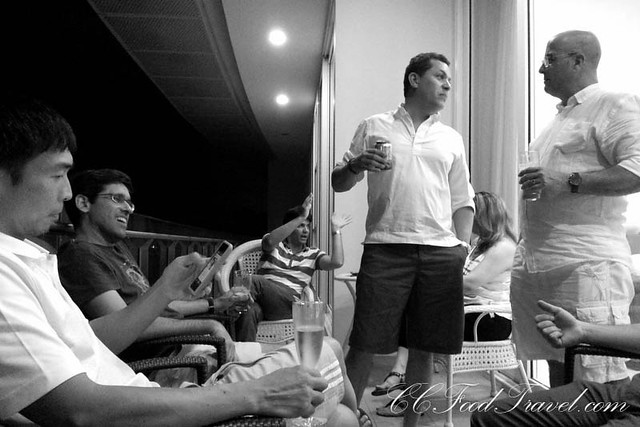 The sun set, but the guests stayed on.. loads of great food and conversation 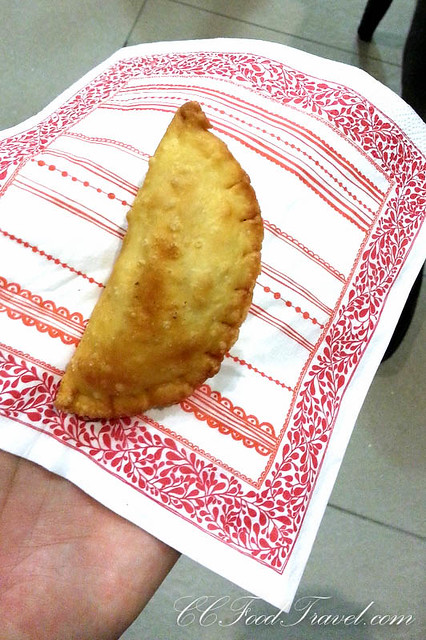 Pastel – like empanada but instead of meat, it has cheese.. a great little snack to go with the Pisco Sours, the beers and the Prosecco. Lunch really ended at midnight.. but what a night. Loved every minute of it. 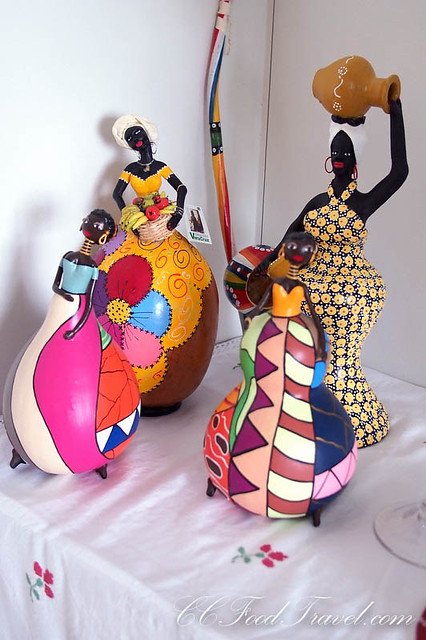 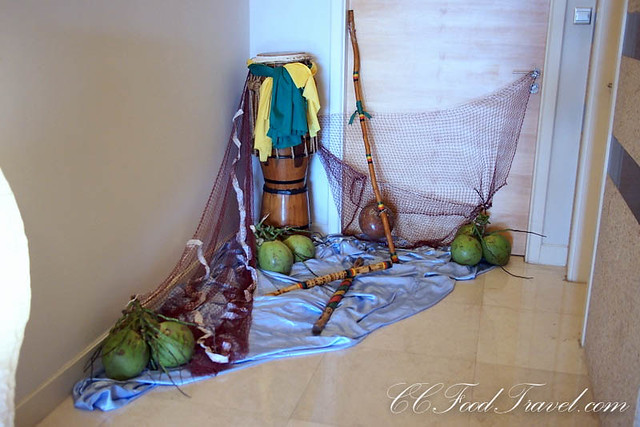 A great introduction to Bahia cuisine.. we hope one day we will get to visit Brazil in person, and discover more of its varied and wonderful culture & cuisine. A big thank you to Josefina.. you are the hostess with the mostess!

One of the places we like to visit on some weekends, is a cosy little place in Subang Jaya called the Hungry Hog. Just…