Anson? Who calls a restaurant Anson.. I mean, like did the “H” fall off or something?

Has Ciki lost her mind talking about a place north of Kuala Lumpur, extremely close to her home town in Ipoh or is this post actually going somewhere?

The answer is no, she has not lost her mind. Soon, it will all be clear;) 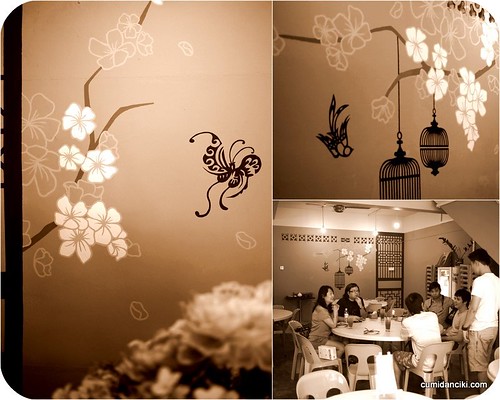 In the early days, this town in question, was known as Teluk Mak Intan, after a female Mandailing trader. During the British protectorate era, the named was changed to Teluk Anson (Anson Bay), in honour of a British Officer and last Lieutenant-Governor of Penang, Major-General Sir Archibald Edward Harbord Anson who drew the plan of the modern township in 1882. In 1982 during the centenary of the town’s establishment, the name was changed again to Teluk Intan (Diamond Bay) by the Sultan of Perak. The town has a number of colonial buildings and Chinese shop houses together with modern buildings and a few shopping complexes. 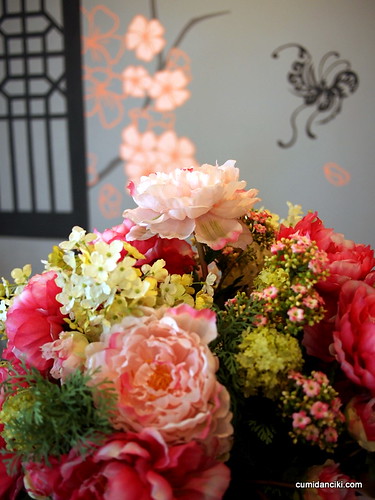 Which brings me to the weird name on the signage outside this new restaurant in Petaling Jaya .. specifically, the section 17 hood. As I walk toward the shop front, I am greeted by a long lost friend.. Jenifer and I realise that she actually owns the place. We hug, we kiss, we say our lost and found greetings. Then she tells me that Anson Food Company a.k.a Anson is inspired by memories of her childhood filled with good food. The owner, my friend Jenifer and her cook hail from Teluk Anson/Intan. Ah, the final piece of the puzzle falls in place. 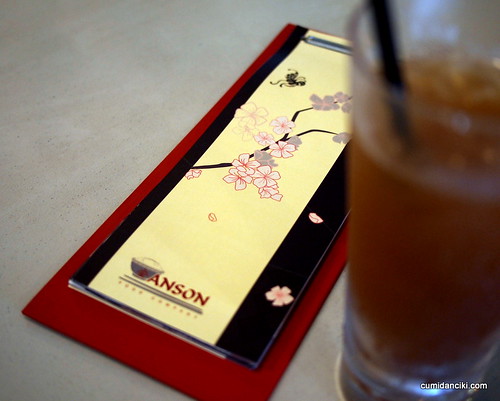 We sit down to lunch and we notice that the menu is as extensive as the river Nile is long. It comprises home-style Chinese dishes, with Nyonya influences. Anson is tucked away in the sleepy suburb of Section 17, PJ – a location with the sort of small-town feel many Malaysians remember from their childhood, where mealtimes were about family, laughter and delicious food, not the restaurant’s interior decor nor the swanky facade. 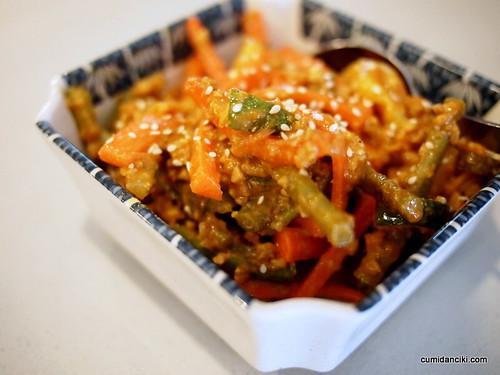 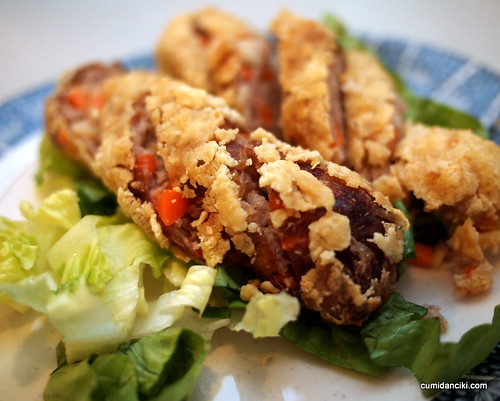 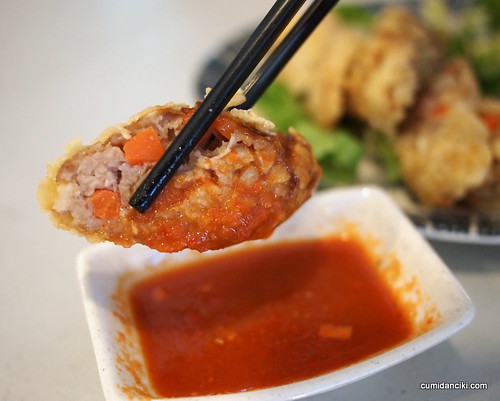 These pork rolls go terrific with the home-made chili sauce 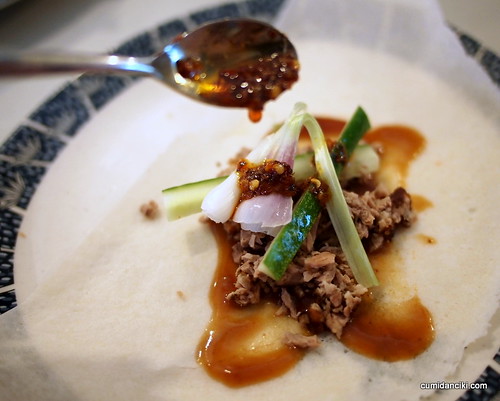 aromatic duck marinated in spices and steamed till tender, shredded, and deep fried until crispy.. 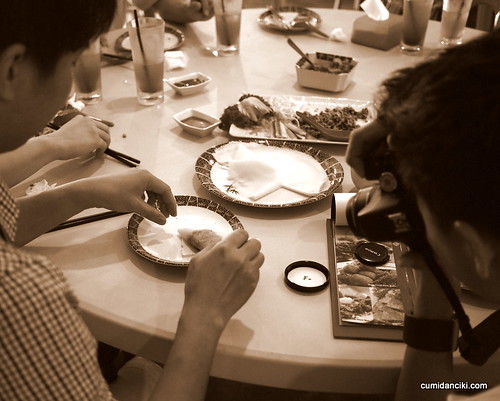 .. then served with soft chinese pancakes, hoisin sauce, cucumbers and scallions. Chaokar (of Chaokar Smokes) demonstrates how to roll a pancake whilst A lil Fat Monkey (of a Lil Fat Monkey) takes a shot 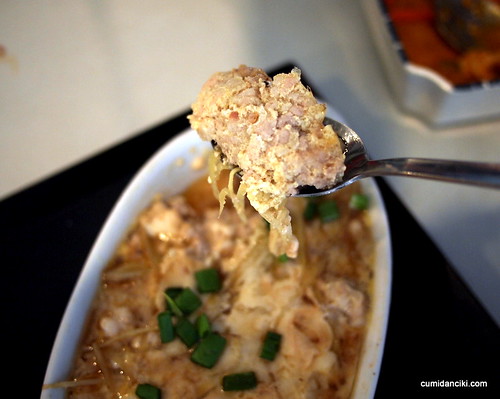 For that old taste of home.. Salted fish and minced pork 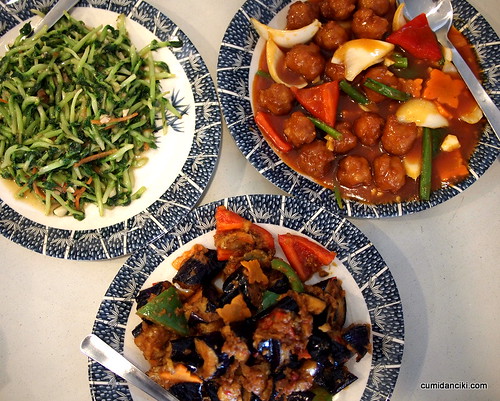 green vegetables with salted fish, aubergine with capsicum in sambal and home-made pork balls in sweet and sour sauce 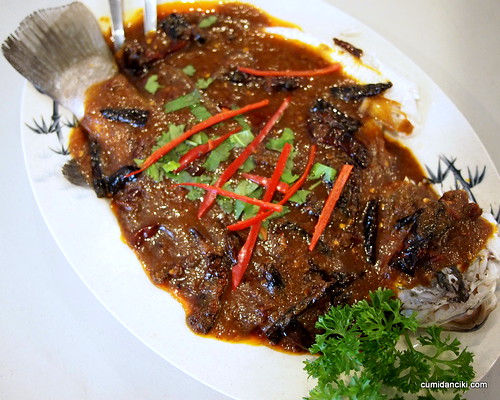 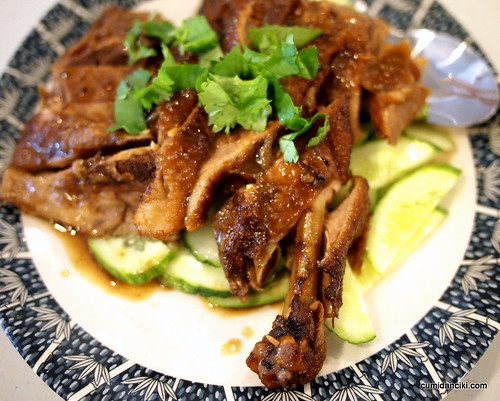 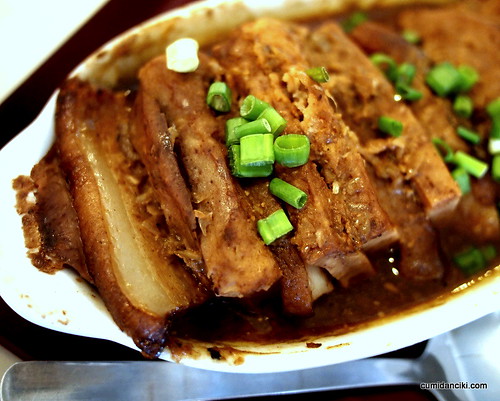 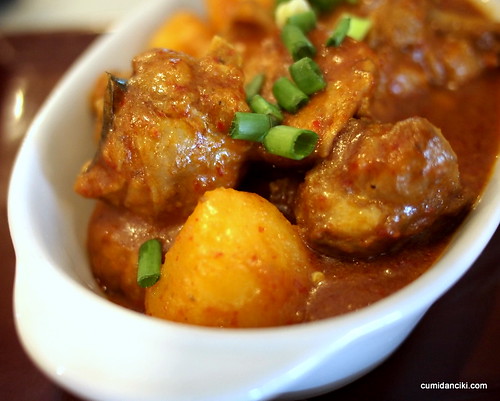 Curry Chicken with a generous helping of potatoes

Naturally with Jenifer hosting our table, she orders the best. The Works. Pork rolls consisting of minced pork and chicken wrapped in beancurd skins, and deep fried a gorgeous golden color, aromatic duck marinated in spices and steamed till tender, shredded, and deep fried until crispy then served with soft chinese pancakes, hoisin sauce, cucumbers and scallions. This was just the tip of the iceberg.

We also got to sample the minced pork with salted fish, assam fish, aubergine vegetable sambal, braised duck, the Special Anson sauce steamed fish covered with in a secret, tangy dark sauce, the chicken curry, braised pork and yam, deep fried bread covered in sesame seeds and stuffed with prawn and pickled vegetables known as the achar.   We were told that all these recipes were from the chef’s mother .. and possibly every cool Teluk Ansonian who ventures into this restaurant in section 17, would be able to identify with it.

Chaokar who has an aunt in Teluk Anson, was pretty familiar with the food. We could see him nodding his head in agreement with some unseen judge and jury in his head. I think the verdict was given in favour of the restaurant! He did ask about the legendary Teluk Anson Chee Cheong Fun though and was surprised by the answer, that it was not available here at Anson.

Anyway, here is Cumi and Ciki’s verdict. Our favourites for that day were the minced pork with salted fish, the aubergine and the special sauce steamed fish. Whilst the fish was overcooked, the sauce was surprisingly tasty. Also the pork belly yam was terrific – with such high fat and carbo content, it would be hard to fail. There was little MSG in the cooking and we did not leave feeling the ill effects of the mono sodium glutamate. The Assam Fish was good for me as well because it was not sweet. The sour sauce was sour enough, bordering on bitter due to the amount of assam in it, and some might prefer it spicier, but I liked it. 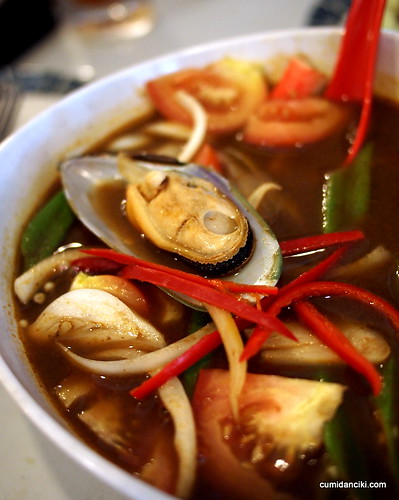 This place is good. I wonder how many Ansonians are out there right now, reading this post and I wonder how packed this little gem of a place will be tomorrow, or next week .. or even a month down the line.

I hope it does well, because I like this place.

Rub a dub dub.. give me a messed up dog. The process of making a good BBQ, is textbook easy. You char up some…