Famous for its Teochew (Chiu Chow) cuisine, Pak Loh Chiu Chow located at Feast Village in Starhill Gallery has been around for more than a decade.

The food however, is still exquisite and this latest promotion that spans only two short months (Jun-Jul), is definitely amazing value for money, because the ingredients are just so fine.. it’s almost sinful, how low the price tag is on this promotion. 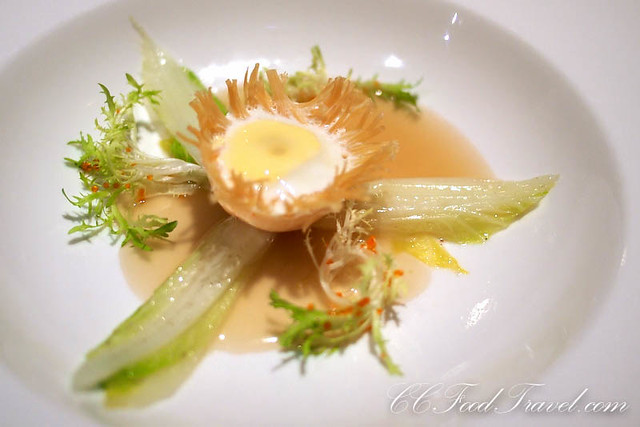 The Oscars of Hospitality Set Menu is priced at RM138++ per person. It is available for lunch and dinner, and you get two glasses of wine with the six course meal – the Grant Burge Benchmark Chardonnay from Australia and Hunter’s Sauvignon Blanc from Marlborough, New Zealand. 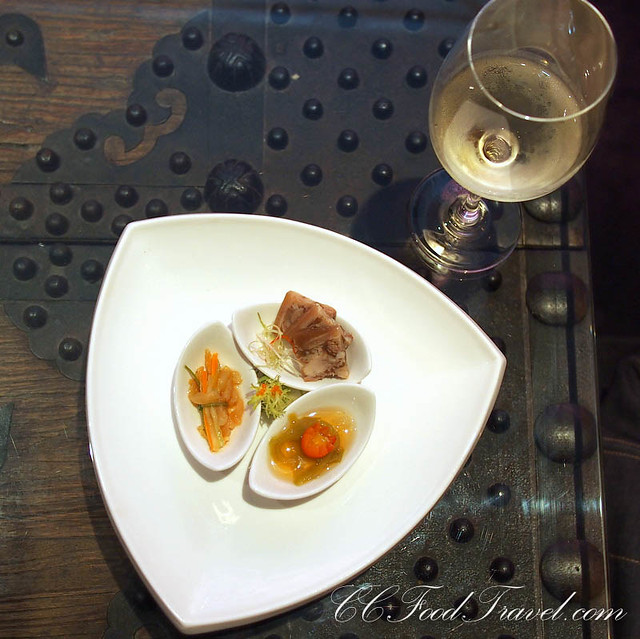 First to be served was the Combination of Cold Platters, paired with the first wine, the Australian Chardonnay. 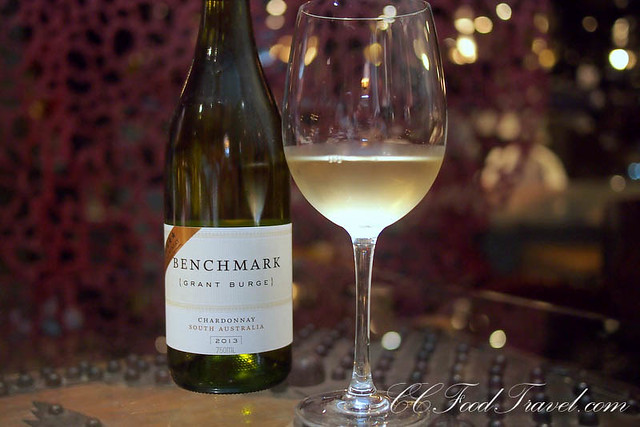 In this combo, the first was a parcel of julienned Cuttlefish, Jellyfish and Cucumber, topped with grilled cuttlefish that had been pounded and cut into strips. It was laced in a sweet, sour and hot sauce which brought out the strong aromas in the cuttlefish. I loved the chewy texture of the grilled cuttlefish, and how it mingled with the slippery jellyfish and cooling cucumber. The smoky aroma of the cuttlefish packed a punch, though it was no more than a mere mouthful.

The second was a chilled, crunchy sliced Bittergourd dish that was served in a plum sauce that had a mild flavor of orange zest. It made the bitter gourd sweet and tart – what an ingenious way of serving this bitter vegetable! 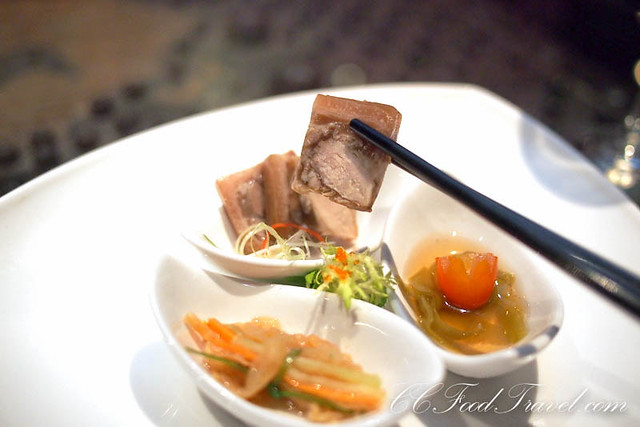 The third was a decadent Pork Jelly with Chinese Wine that I rather wished there had been more of. It was made from pig’s trotter and tail, simmered in an aged braising sauce with herbs. As some point, the gelatin in the pork would have congealed and rose wine added, and the gelatinous meat chilled till it had set. It had the mouthfeel of some super light and flavorful pork terrine. Loved it!

All three paired well with the Australian Chardonnay. 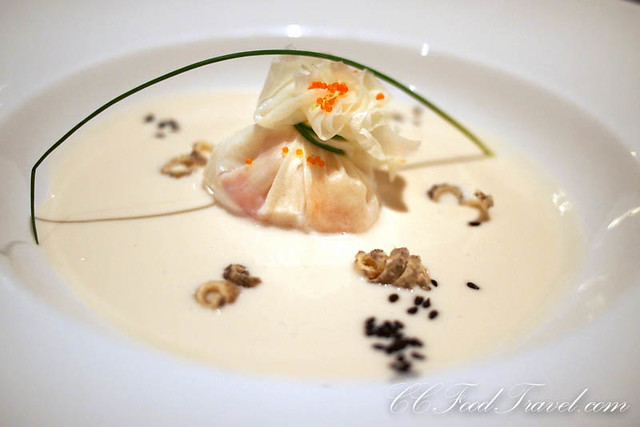 The next course was my favorite for the night. The Fortune Parcel of Prawns in Double-boiled Superior Almond Soup was insanely good. You know how you always expect Almond soup to taste sweet, sort of part of dessert? Well this one was savory. It was so smooth and pungent in almond flavor, it just knocked my socks off. Well, you have got to be a fan of course. The soup had been blended 3 times and filtered and there were pockets of surprises in the broth in the form of curly salmon skins that had been fried to a crisp. So, so good! 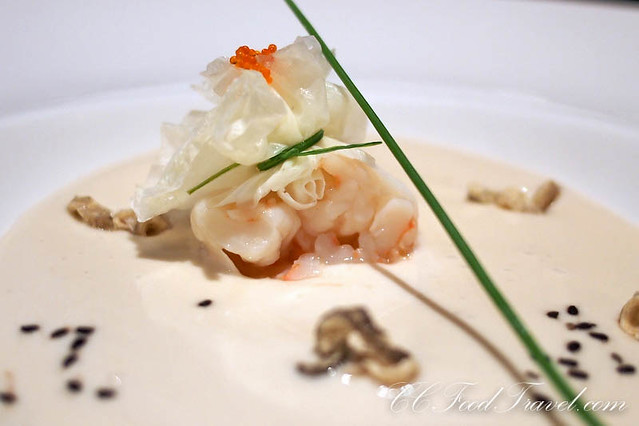 I thought to myself at this point, if this promotion was to celebrate Chef Alex winning the title of Masterchef (Asian cuisine) in the Hospitality Asia Platinum Awards 2013-2015, we could now understand why. The food was amazing.

Then came Cumi’s favorite dish of the night, the Steamed Fillet of Imperial Sea Grouper rolled with Vegetables in Chiu Chow Style. 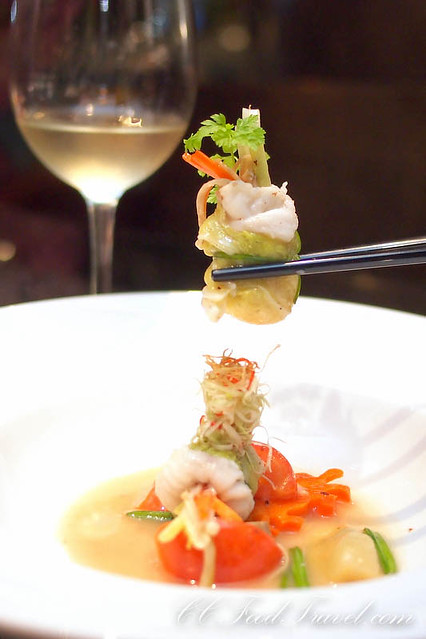 The fish was already flayed from the bone and rolled up with enoki mushrooms, yellow chives, then wrapped in Chinese cabbage and steamed with salted vegetables, thin slices of carrot, tomato and sour plum. Cumi loved it because his old nanny used to make this fish dish when they were growing up.. less fine of course – just your regular fish, but he said that this one had exquisite flavors which reminded him of his nanny’s cooking style. Anyway Chef Alex told us that he wrapped the fish in cabbage to keep it moist and prevents it from being overcooked. The sauce was super addictive – sour and sweet and intoxicatingly delicious. I licked my plate clean. We moved on to the next wine during this course, and the fish was a good pair for the Hunter’s Sauvignon Blanc from Marlborough which was full-bodied, slightly chalky and overflowing with fruity aromas. 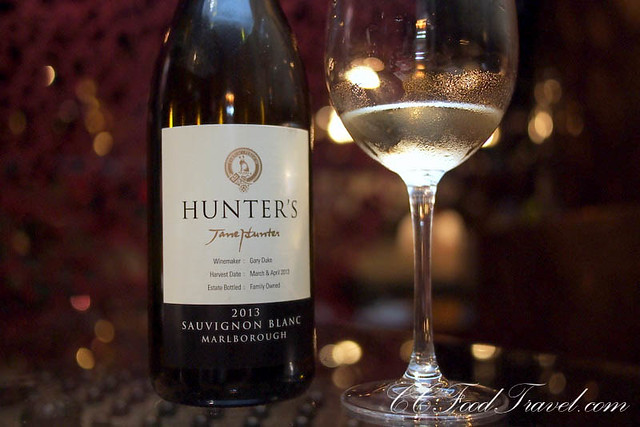 The next creative dish of Steamed Quail’s Egg accompanied by Sun-dried Scallops looked rather like an art project. It looked like a flower with the fine threads of dried scallops for its petals. Since I am a huge fan of quail egg (any egg really), I loved this dish. The scallops were full on in flavor and the quail egg rich – the obvious and perfect accompaniment. 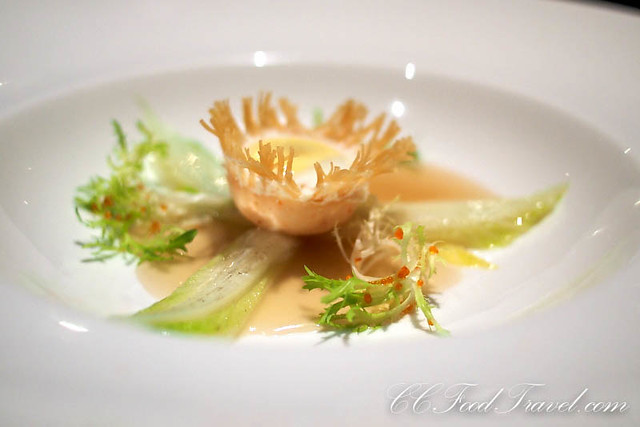 We were fast approaching the end of dinner, with this next one. The Village Style Wok-Fried Fragrant Rice with Assorted Seafood, Duck Egg and Shrimp Paste was tasty enough, but the ‘skin’, a netting made from duck egg yolk was a little dry, this time, even the Chef agreed. No matter, it was still a flavorful course, thanks to the generous amount of prawns and grouper meat in the rice. 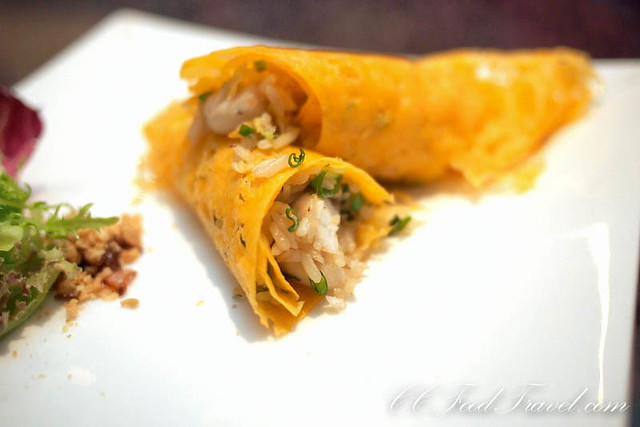 Finally dessert was served and we were sad to see dinner come to an end.

The Chilled Osmanthus Flower Jelly served with cubes of Fresh Aloe Vera and a dash of Bird’s Nest was refreshing – almost like a final palate cleanser. I savored every last mouthful of it. 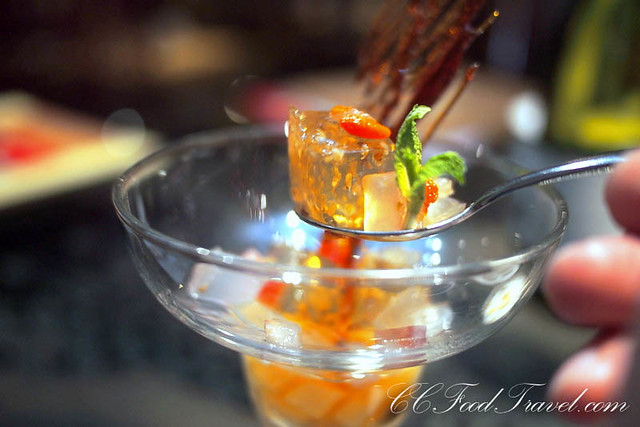 I have to say, that Chef Alex’s trademark has got to be how he blends flavors, ever so delicately – he has a very fine palate, and it is obviously conveyed in his cooking. 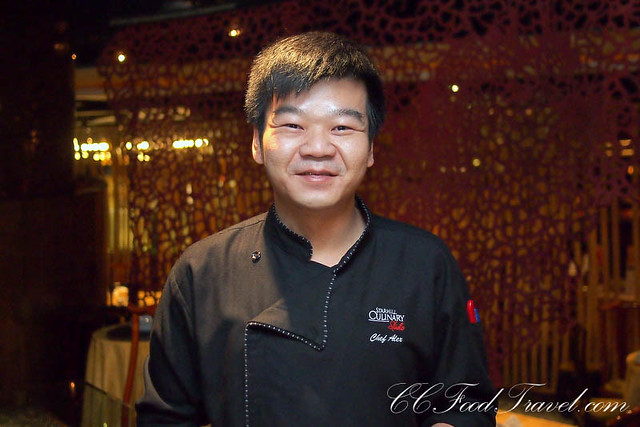 Chef Alex Au hails from Hong Kong, and joined Hong Kong’s famous Pak Loh Chiu Chow restaurant right from the time it opened in Starhill. This “Oscars of Hospitality” Set menu is in honor of their HAPA nominations and triple win awards which are HAPA Restaurant of the Year, HAPA Flavours of Asia, and HAPA Masterchef. That’s a whole load of accolades!

The Oscars of Hospitality Set Menu is priced at RM138++ per person. It is available for lunch and dinner, and you get two glasses of wine with the six course meal – the Grant Burge Benchmark Chardonnay from Australia and Hunter’s Sauvignon Blanc from Marlborough, New Zealand.

If you are in the Tropicana area, and it happens to be 6pm – don’t forget happy hour at MJ Cafe! Don’t ask me…