One of the great things about Japanese food, is that it is so versatile. I can eat it any time of the day, and I’ve even had it paired with white or red wine, sake or shochu. Even an after work beer goes terrific with some slivers of fresh fatty fish, still plump and juicy with promise.

And when we visit Kuriya, definitely one of the top toro-touting dens in the city,  we’ve got Japan on the mind, namely its most delicious offerings, exotic seafood and sushi. And now, Shochu as well. 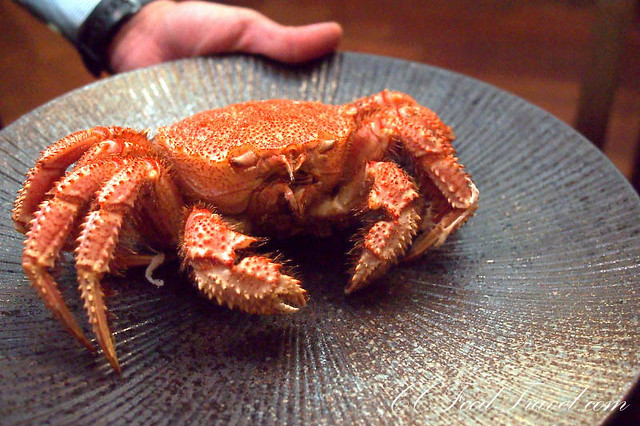 The Hair Crab (Kegani) a.k.a the horse-hair crab. Its meat is full and tender – it has a small body with a concentrated rich, sweet meat that’s hard to top – RM230 for this baby..

This would definitely be the first time, we were ever invited to check out Shochu pairing with Cheese, but we were obviously game and excited about it. We soon learned that Kuriya plans to promote this during its happy hour segment of the day (i.e. after work) and at an affordable price too. 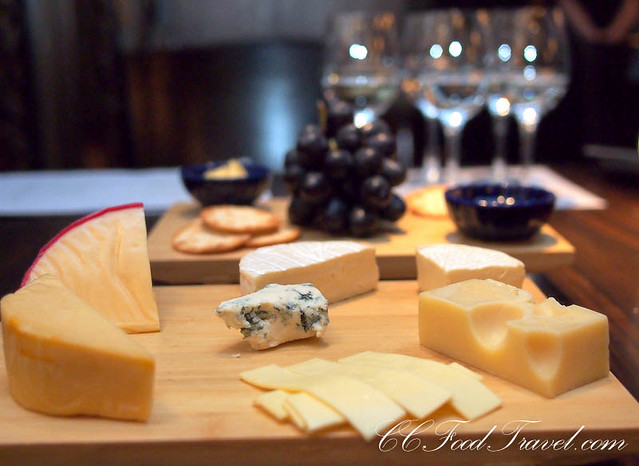 The usual suspects – from the Soft-ripened Brie, to the Blue-veined cheese .. this looked like it was going to be an interesting night. 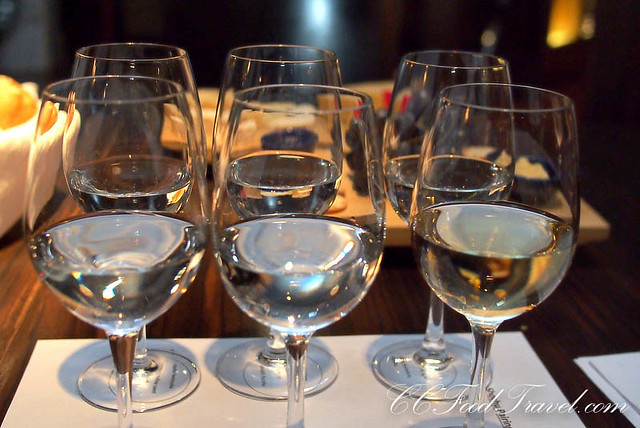 6 types of Shochu, from different Prefectures in Japan. Shochu can be made from barley (mugi), sweet potatoes (imo), buckwheat (soba), or rice (kome). Just like wine, they all have their characteristic aromas and flavours. 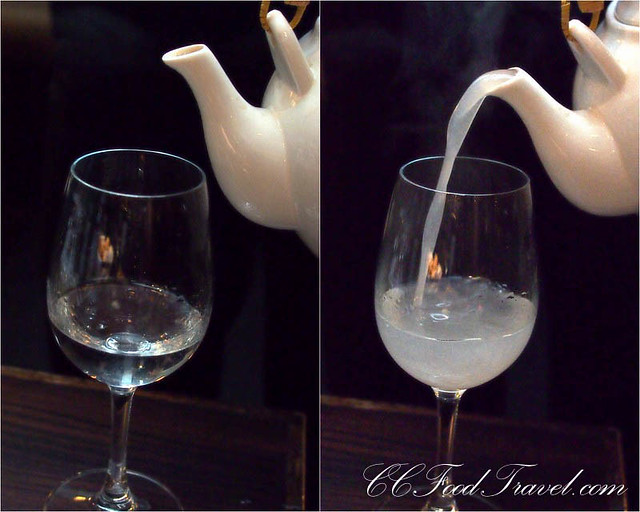 The first Shochu to be paired with the first two cheeses (Brie & Camembert) would be the barley based Ichiko. It was light and easy to drink. We would be trying the shochu from light to heavy of course, just like wine.  First up, we were told to try the Shochu neat with the cheese, and to appreciate the taste. Then we would be given an item to add to it, which would change the taste, and mellow it down a little. In this first instance, we were given Sobayu.

Sobayu is simply the hot water in which the soba has been boiled. Regarding the origin of sobayu as a food, it is said that there was a soba lover who asked for the water in which soba had been boiled. “If soba is good, the cooking water has to taste great, too,” was his logic!

Sobayu is sometimes served when you order morisoba or zarusoba, which are varieties of cold soba that come with dipping sauce. After you finish eating your soba, you can add some sobayu to the remaining dipping sauce and drink the mixture (and you will see this later in the post). Drinking this blend of sobayu and dipping sauce is an indispensable part of eating soba for many soba lovers. Sobayu’s preventative effects against modern-day diseases such as high blood pressure, diabetes, decreased liver function are all great reason to start drinking this murky water! 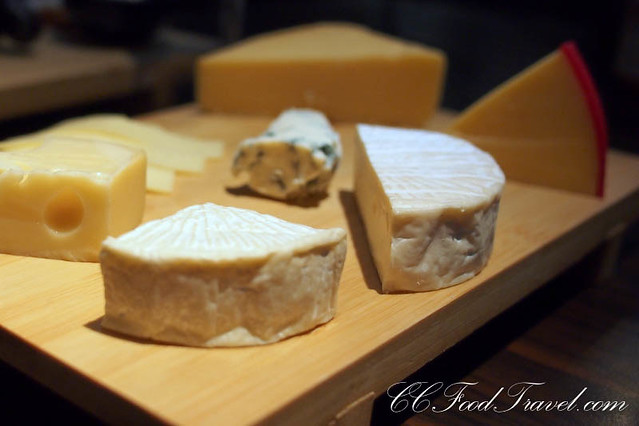 Soft-ripened cheeses feature a snowy-white, edible rind that ripens the cheese from the outside in.. 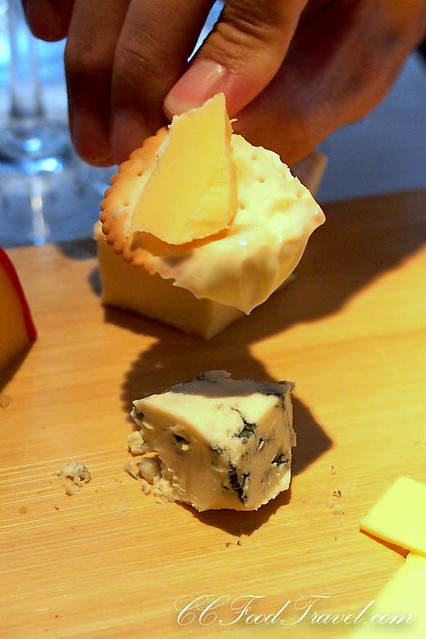 The Brie was rich and creamy, with an earthy mushroom ﬂavor. The Camembert had an even more intense, pungent ﬂavor. These paired well with the Ichiko mixed with Sobayu. Very mellow and elegant tasting. 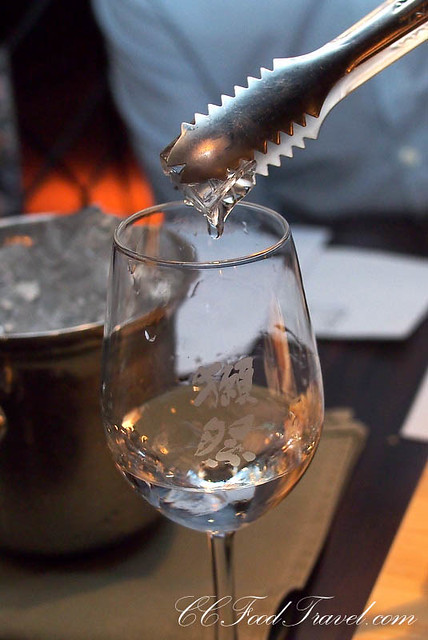 Next up, the Kuro Isanishiki – Imo/very dry, tight finish from Isa, Kagoshima

I remember guzzling bottles of Sweet Potato, or Imo Shochu, over dinners in Japan (back when I worked for a Japanese Pharmaceutical) and these shochu are perhaps the most common in Japan, though they don’t receive quite as much love abroad. They have a soft, faintly yammy nose, the first thing that strikes you about the flavor is that it’s much richer than the barley or rice shochus. Again after trying it neat, we were told to add ice to it. This mellowed the taste, since it virtually diluted the Shochu. 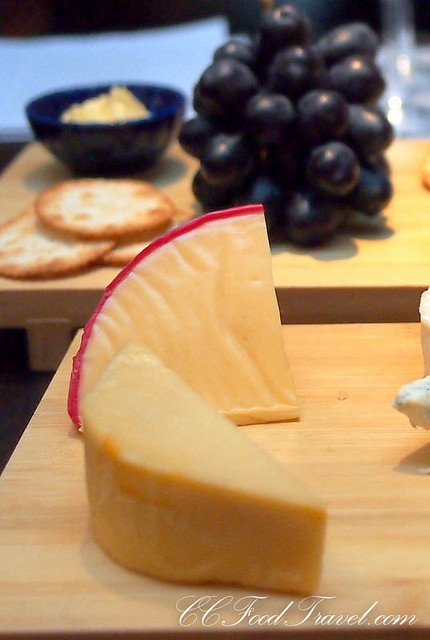 And just like the Shochu, we were moving along the board, of cheeses nicely. This was well paired with the leaner, nutty Gouda & Edam. Loved the woody and grassy undertones of these rich, buttery & slightly sweet cheeses. The light, nutty ﬂavor and smooth, ﬁrm texture definitely went well with the rich Imo Shochu.

Next up, the Kannoko – Mugi/Rich, warm, woody from Kagoshima Kyushu drunk neat. This Shochu reminded me of an aged Whisky, and it was incidentally Cumi’s favourite Shochu that night. It was aromatic, and smokey and we were happy to find it paired well with most of the cheese we had so far. A very versatile one -we made a mental note to pick it up at the duty-free if we ever saw it. This barley shochu in a beautiful glass bottle is made by master distiller Satsuma Shuzo. 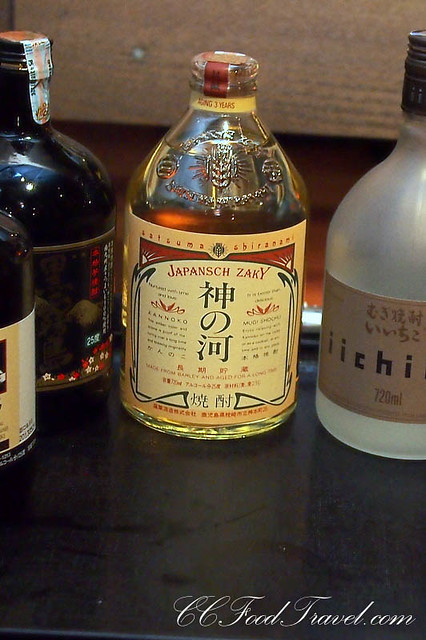 Made from 100% select barley, Kannoko, which means ‘river protected by the gods’ in the southern Japanese Kagoshima dialect, is named after a stream in South Kagoshima. Kannoko has a rich and mellow flavour with fragrant aroma. Its amber colour comes naturally from the 3 year oak barrel aging process it undergoes. 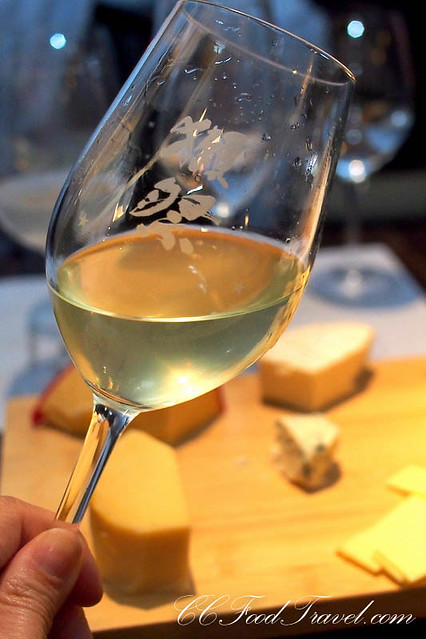 Next up, the ever so popular Kuro Kirishima. Now if you’re intersted in trying imo shochu for the first time, this is a good choice. Same if you’re in the mood for an imo, but aren’t quite up to the adventure that some provide. 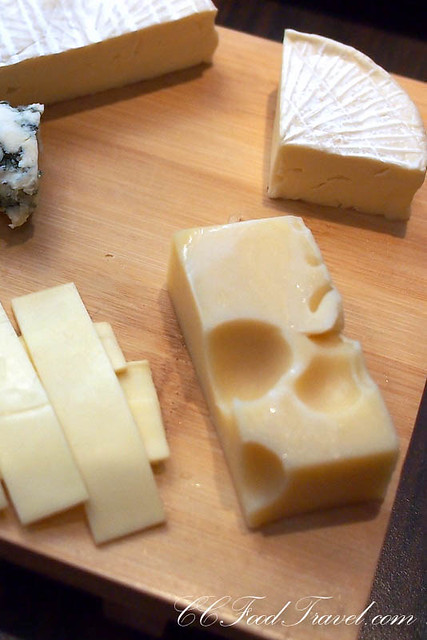 Moving along to the semi-hard variety and ﬁrm cheeses. This selection of cheddar begin with a bit of chewiness before melting into a rich, creamy texture.

While others may be richer, more bold, and more distinctive, the Kuro Kirishima is an easy drinker that goes well with a wide variety of food, and definitely with cheddar too. The taste is just a hint smokey, lightly sweet, with an underlying complexity that’s difficult to describe – it has an almost warm mouthfeel. Adding green tea this time to our Shochu, we found the newly constructed spirit lingered unobtrusively on the pallet until you took another bite of the cheese or had another sip. Very nice indeed. 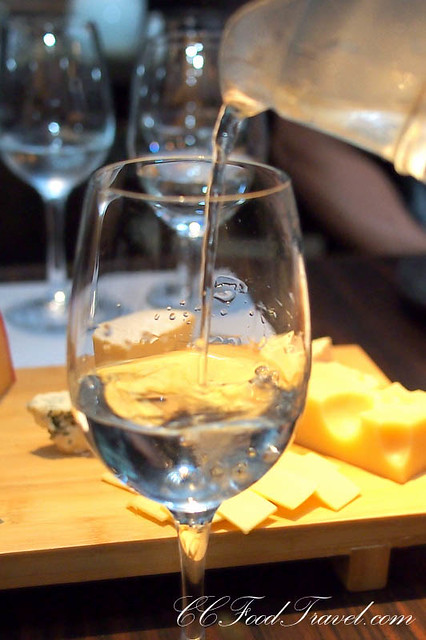 Next Shochu on the tasting menu, was the Kaido Iwainoaka – Imo/mellow sweet, full-bodied, from Kagoshima. This was drunk with ice water.

Pairing the next Shochu with the Blue Cheese would be an interesting experience. The stunning red bottle of this Shochu is undoubtably alluring and “iwai no aka” refers to the celebratory red color of the bottle. The shochu, however is clear.

Blue-veined cheeses can be stinky, and have gained popularity over the past decade for their distinct, piquant ﬂavor. Their most distinguishing characteristic is a blue-to-grey streaking or marbling. Biting into the Blue, we found it Sharp, salty and intense.. and then the mouthfeel gave way to a softer, creamier texture with rich, earthy ﬂavors.

Taking a sip of the Kaido Iwainoaka, we find that it starts interestingly with a hint of juniper on the palate, but that’s quickly replaced with a light mellowness. The Kaido finishes with the slightest hint of cinammon and a sweetness that paired well with saltiness of the blue cheese. Adding ice-water to the Shochu made it smoother and even easier to drink – at this point however, the Blue cheese would inevitable overpower the Shochu. I preferred to have mine neat for this pairing. 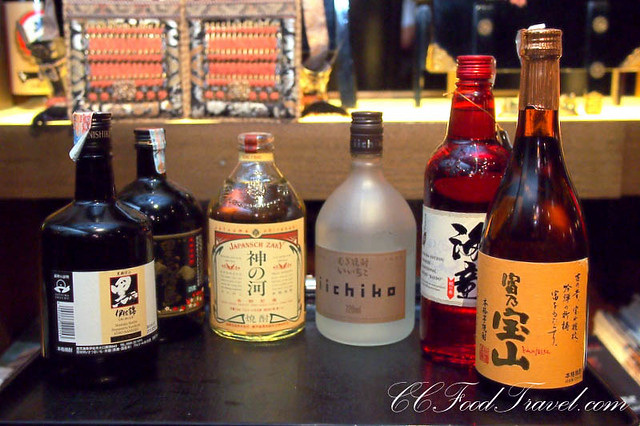 Like so many imo shochus, this one has that earthy nose, with an added element of wild flowers. What makes it unique from other imo shochus is the yellow koji, which gives it much more floral aroma and palate. Tomi No Hozan is definitely drinkable neat and that is how we do this one. A buttery mouth feel accompanies the pleasantly sweet floral taste. When paired with the Blue cheese, the finish is neutral to sweet with an unexpectedly pleasant buttery aftertaste. Loved this Shochu, and would drink it socially with friends anytime.

And then there was still time for some food. So, Kuriya has got to be famous for their O-toro, Anago (the paler version of the Unagi) and chilled Buckwheat Soba (where the Sobayu comes from). 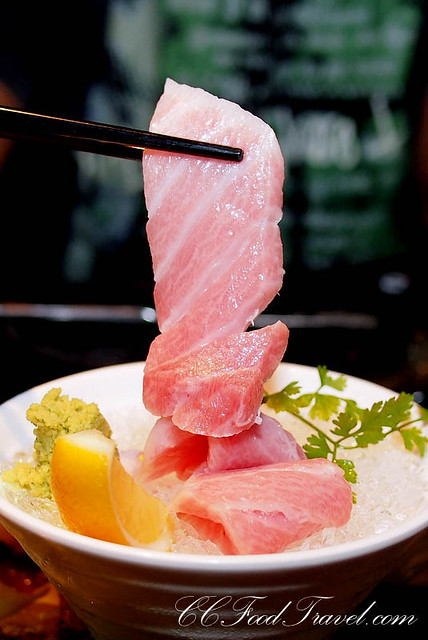 This particular O-toro is the fattiest part of the Tuna Cheek Belly – i.e. the belly of the fish, near the cheek. I guess you could call it, the fattiest of the fat. And as if to prove it, the Chef brought out the part for us to see (not for the squeamish). The price for 3 slivers of prized sashimi and 3 cuts of sushi was a mean RM120! 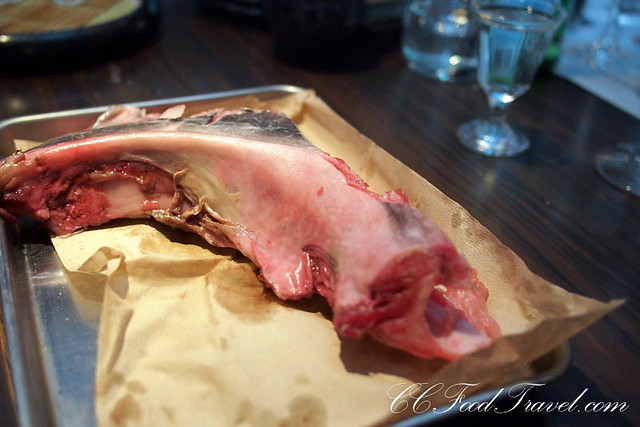 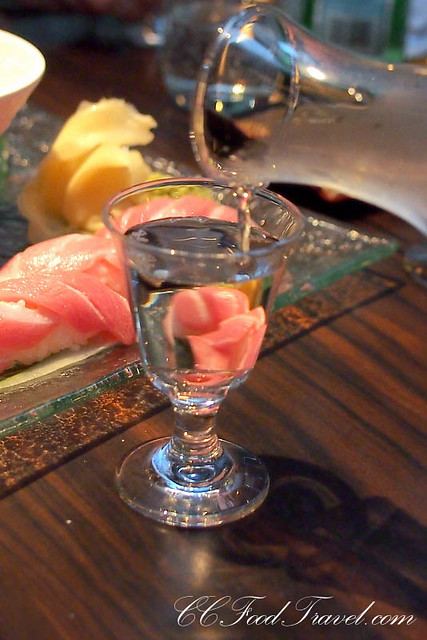 And if you like fine Sake, connoisseurs of sake would be happy to note that the sake at Kuriya can go up to 23% Dassai. 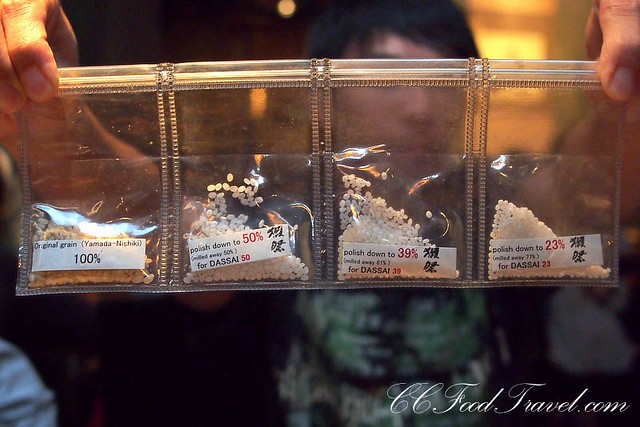 Dassai 23% means extreme rice polishing. And this sublime sake is one of the great achievements in the world of sake. Rice milled to an astounding 23% of it’s original size sets the stage for a complex, deep and oh so elegant tipple. Fruits dance on the palate and you’re transported to a higher realm with each sip. 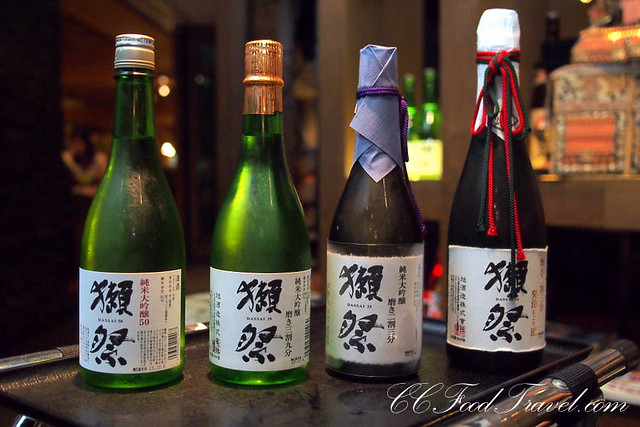 Price range gets more expensive from L-R. The one we had was the second from the right, and cost a whooping RM600 plus for the bottle! 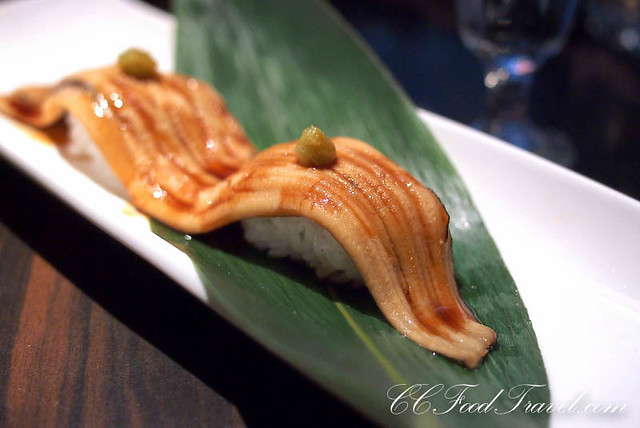 Since the day I started eating Anago, I was pretty much hooked. Less caramelized and sweet as the Unagi, the Anago are saltwater eels, somewhat similar in taste and texture to unagi (freshwater eel). The best anago are caught near Haneda in Tokyo Bay. Anago is used for sushi, where it is usually boiled to get rid of excess oil, and then roasted and covered with a sweet sauce called kabayaki. I just like it because it is less sickly sweet than the Unagi, and you can get more flavour out of the eel. 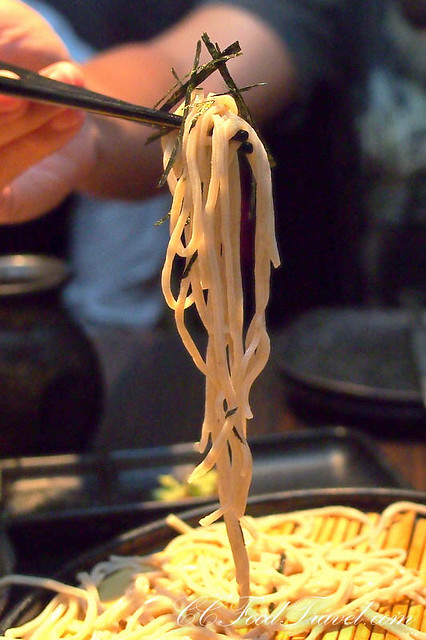 Cold Buckwheat soba – add chives and a spot of wasabi to your dipping sauce. Then dab some seaweed onto your soba, and dunk it into the dipping sauce – Slurp for good measure as you eat your cold noodles! 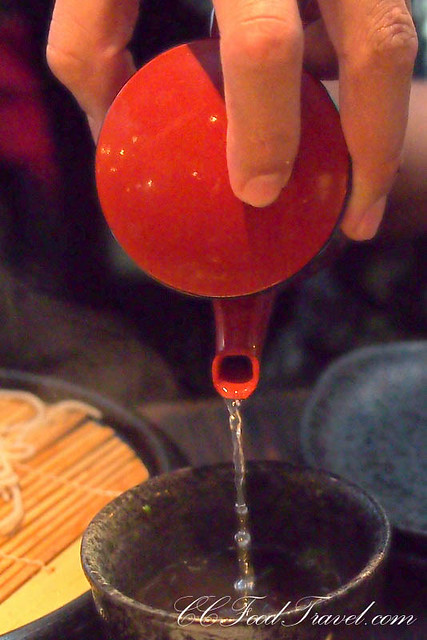 Not wasting a drop of the dipping sauce for the Soba..

Sobayu is sometimes served when you order morisoba or zarusoba, which are varieties of cold soba that come with dipping sauce. After you finish eating your soba, you can add some sobayu to the remaining dipping sauce and drink the mixture. Drinking this blend of sobayu and dipping sauce will make you invincible (or so the Japanese say). It is definitely an indispensable part of eating soba for many soba lovers. Gotta love the Japanese for being so damn ritualistic. 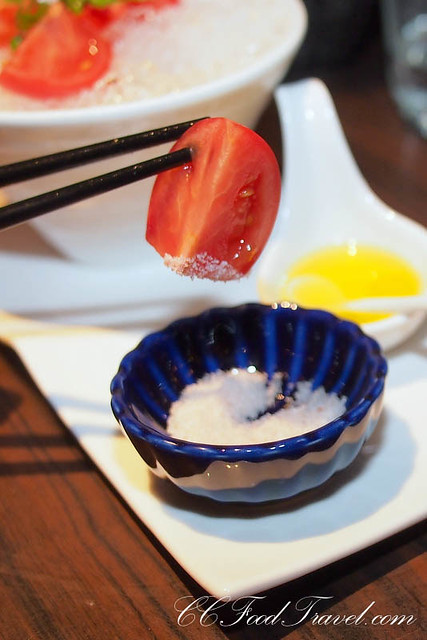 These tomatoes were tiny and packed a stronger punch in terms of flavour and sweetness than regular tomatoes, and came at a premium price of RM17! Eaten with a dab of sea salt, or olive oil, this was a truly refreshing and health dish. 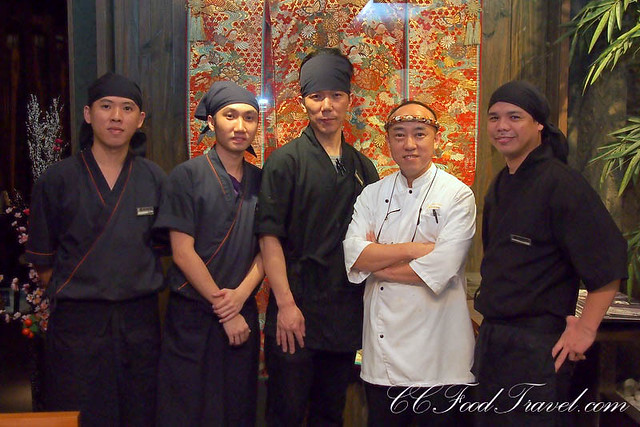 Kuriya is definitely paving the way, in creative Japanese cuisine and fine dining. Can’t wait see what innovative promotions will be coming along next.

And the winners for the March Dining Contest – dining at Grand Millennium KL, are…     1. Prem Adheesh Lekhi 2. Jeff…