To some of my American friends, the words ‘pork knuckle’ summon horrific images of knobby, stringy joints and inedible parts and is usually met with a shudder and upturned nose. Luckily, my Brazilian friends, are totally 100% into the Pork knuckle. Too bad for the Yanks, and more for me (and the South Americans), I say. And some of the best knuckles, are made, not just by the Germans, but by the Chinese, no less. And in PJ, I know just the place for it. 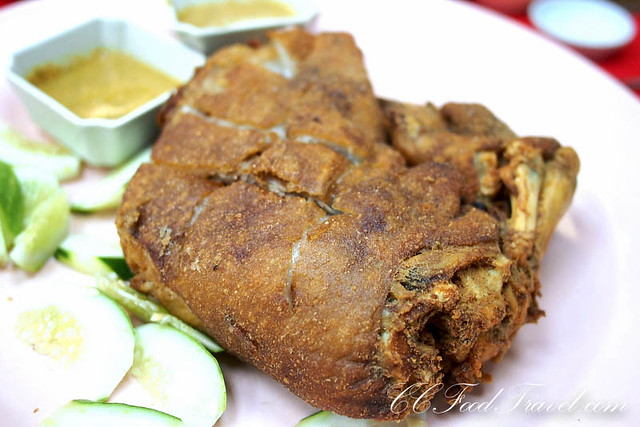 Ah yes indeed.. pork knuckle is not a delicate cut.. it is a huge fatty, basketball of meat and tendon, and its sawed-off protruding leg bone gives it a look of barbarity, appropriate for consumption in a restaurant that’s packed to the rafters, with equally barbaric and rowdy Chinese diners, just going at it, like there’s no tomorrow. But then again, the pork knuckle’s perfection, lies in its indelicacy, and the more of protruding bone and fatty matter, the better. 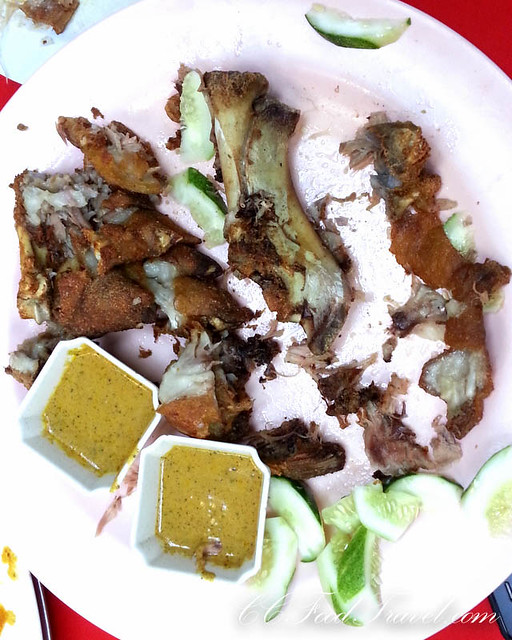 Oh, and what about the crispy bit. That’s like the whole point of eating pork knuckle, if you ask me.

So, we enter the shop and sit down. We place our order and in less than 10 minutes, the first dish lands on our table. Incredible, considering it’s 8pm and the place is truly packed. 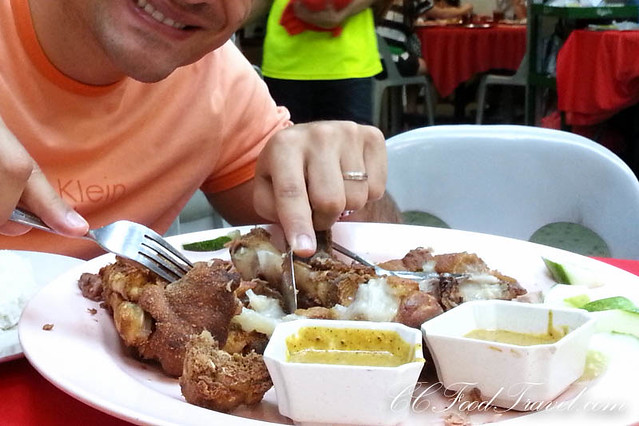 The shiny, glistening pork knuckle comes and with it, an almost fluorescent yellow dipping sauce. Some sort of slightly sweet, and thick, black pepper mustard sauce apparently. The fat-pad is dark with promise.. Sinking your teeth in it (and yes, it’s probably better to go at it with your fingers than cutlery) you will find it both crisp and chewy at the same time. A good knuckle has its crispy fat layer browned just enough to be too tough for a knife to cut through. As you sink it in further, it should give way to soft fat, tendons, sinewy cartilage and finally, tender meat. I scrape off the remnant fats on my utensils, then picked up the fat and eat it with my fingers, gnawing off sections of cracklings with my teeth. A nice sting from the peppery sauce cuts the grease, and I am a happy camper. 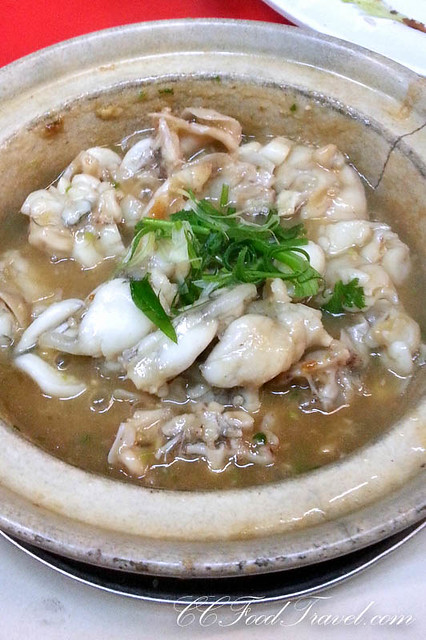 And then there is this other dish that my American friends don’t eat.. frogs legs.

What a shame.. because the frogs legs at Wang Chiew are truly delicious! Claypot style with loads of wine sauce, ginger, shallots, and spring onions.. the stock is incredibly sweet and the wine makes you a little heady. 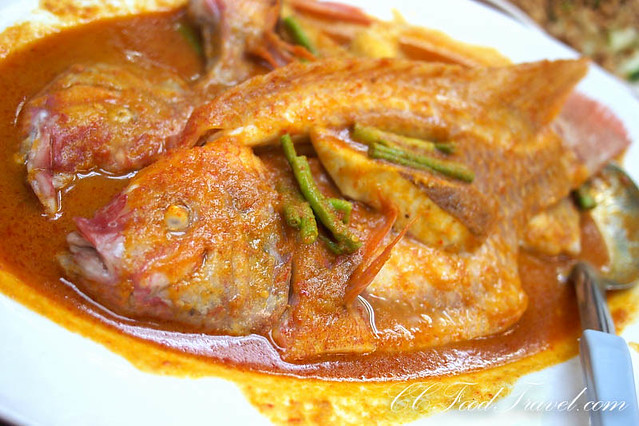 Assam fish – another winner. Super fresh fish and a nice, spicy tangy sauce. Beware the rice.. the sauce will have you shoveling rice down your throat like there’s no tomorrow. 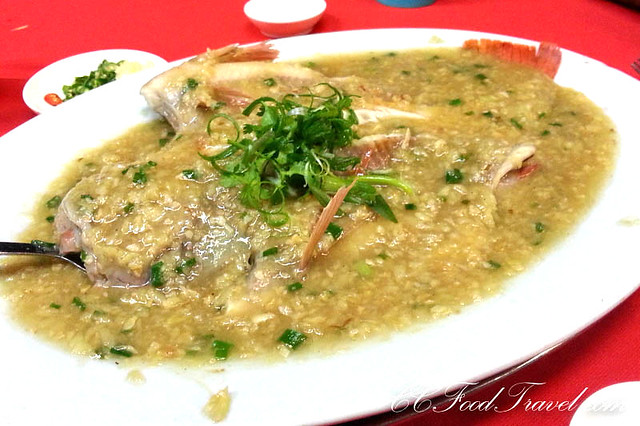 And of you prefer something less spicy, there’s the ginger steamed fish that’s a great choice too. They use young ginger here, that imparts a light sting, without being bitter. Another great sauce to go with white rice.. no wonder it’s so easy to pack on the kilos when dining on great Chinese daichow dishes. 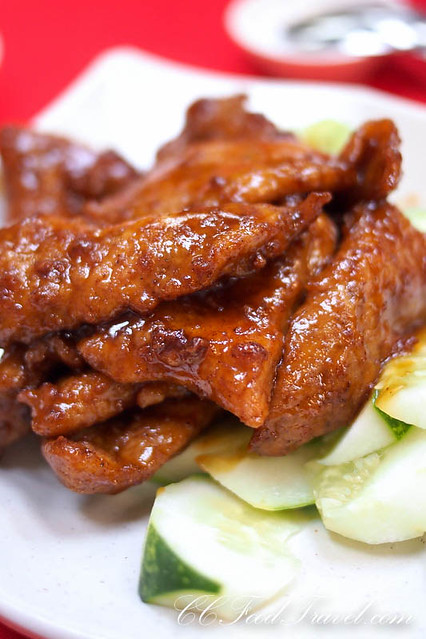 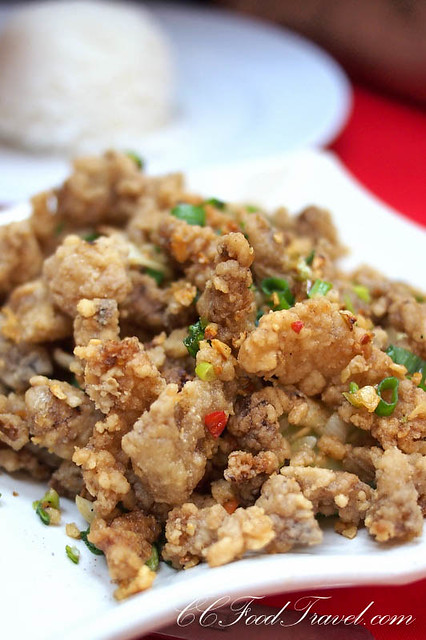 Last but not least, chiew-yeem lai lui har (salt and pepper, battered, mantis prawn). Crispy, crunchy and super tasty, albeit a lot of MSG, but then again, which Chinese daichow dish isn’t heavily baptised in it..?

Sometimes you get a hankering for a simple egg on toast that just won’t go away. The image pops up in your mind and…