Why do I love Korean BBQ? I’m talking about the ones we get in Malaysia.

I think it’s because of the fact that if you are hungry, this has got to be the place that offers instant gratification. I am of course referring to the insane number of condiments (banchan) that come with the meal. Those dishes vary slightly from restaurant to restaurant but they might include fish cakes, glazed anchovies, black beans, marinated cucumbers, sautéed spinach, sliced potatoes, marinated tofu and chopped watercress. Be wary of anything with an orange hue. It probably contains kimchi and is likely to be fiery hot.. but I do love my Kimchi! 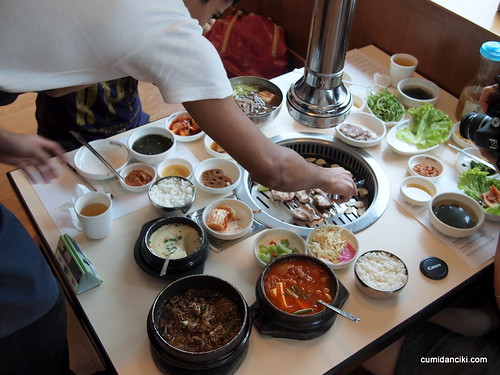 After picking up a certain someone who is from the northern part of the the country but now residing in KL, we head on down to Subang Jaya for our Korean fix. Don’t ask. The place we were initially supposed to have lunch at was closed, so here we are at Daorae Korean BBQ in Taipan.

As most diners do, we ordered the barbecue. We went of the Ox tongue, and the pork belly which was grilled with scallions, onions and peppers. 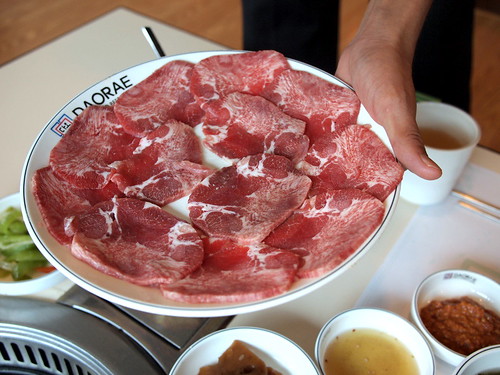 There is this huge performance in the taking of your order, the placing of the charcoal and then the waiter asking you how you would like your tongue done. All very attentive and endearing really. 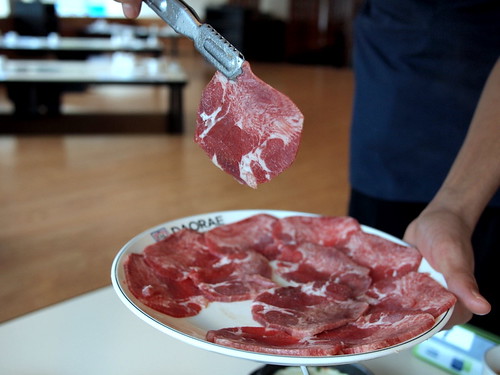 What’s the matter.. tongue tied? Or, cat got your tongue? 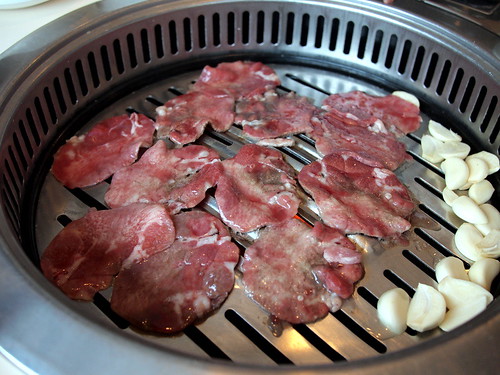 The waiter then uses tongs to place the meat on the grill top. Traditionally, waiters are responsible for the grilling in Korean restaurants. You will notice an almost manic attention to the progress of each piece of protein.. a lot of prodding with the tongs. If you like a little more char on that tongue of yours, announce that you’ll cook it yourself or just tell them how you like it done. No one will yell at you for teaching them how to cook. That’s why I love Korean BBQ. Everyone is allowed to be an expert!

Now use your chopsticks to drag a piece of cooked meat through the mixture of sesame oil, salt and pepper. Place it on a piece of fresh romaine cupped in your opposite hand in the manner of a tortilla. Add to this some kimchi and perhaps a dot or two of bean paste or kochujang . Wrap and eat. Heaven in between your fingers! 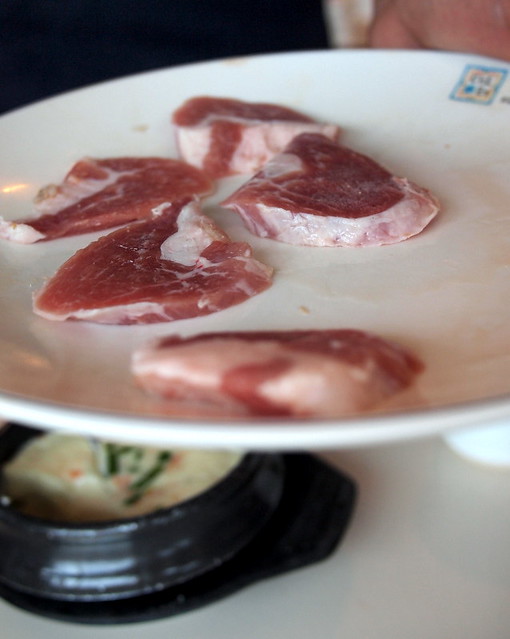 Fabulous pork belly.. that promises to go straight to your belly 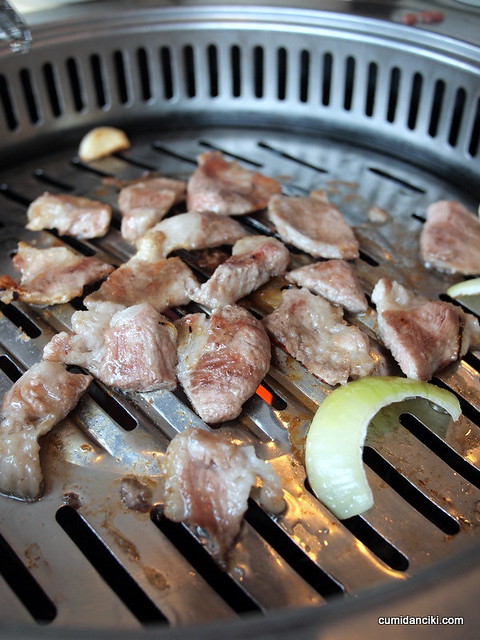 You see how the pork fat disappears on the grill? (well, almost) 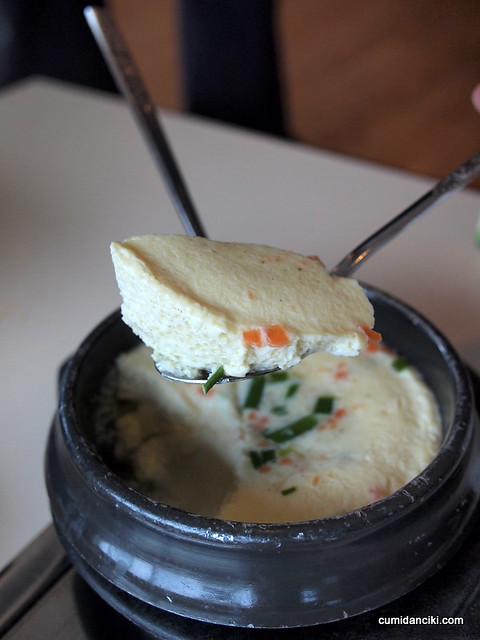 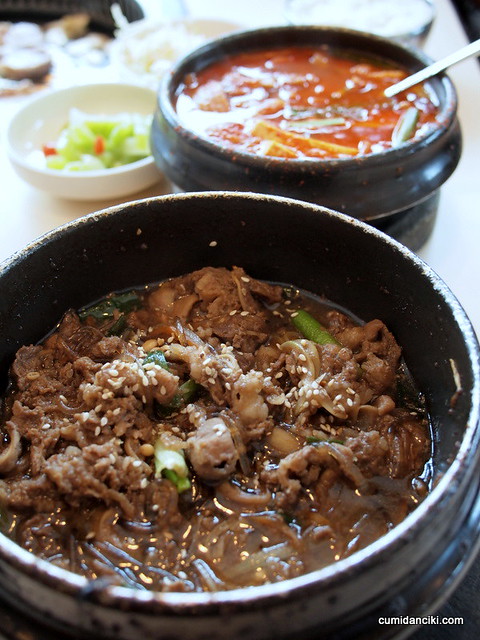 Bulgogi – the famous “fire meat” in Korean, which refers to the cooking technique, over an open flame 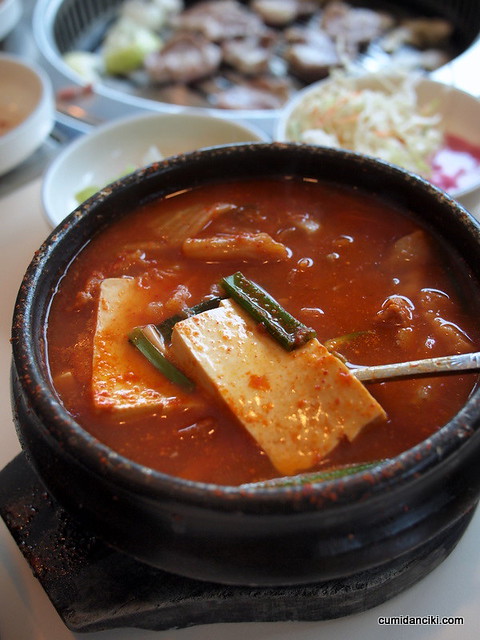 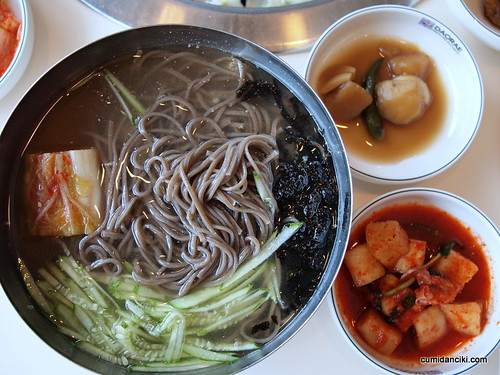 How about some ice in your noodles? Brrrr… 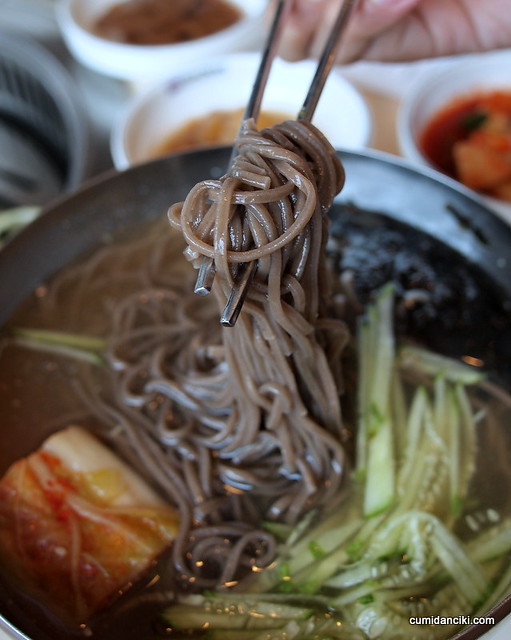 Naengmyeon actually tastes better than it looks. Because of the ice in the soup the fat in the dish kind of coagulates and forms a scum on the top layer, but believe me, the dish tastes fantastic! Don’t let the look of the broth put you off!

Naengmyeon is the Korean counterpart to Japanese soba, and is served in a large stainless bowl with a tangy iced broth, julienned cucumbers, seaweed, and either a boiled egg or slices of cold boiled beef. Spicy mustard sauce and vinegar are often added before consumption. The long noodles would be eaten without cutting, as they symbolized longevity of life and good health. 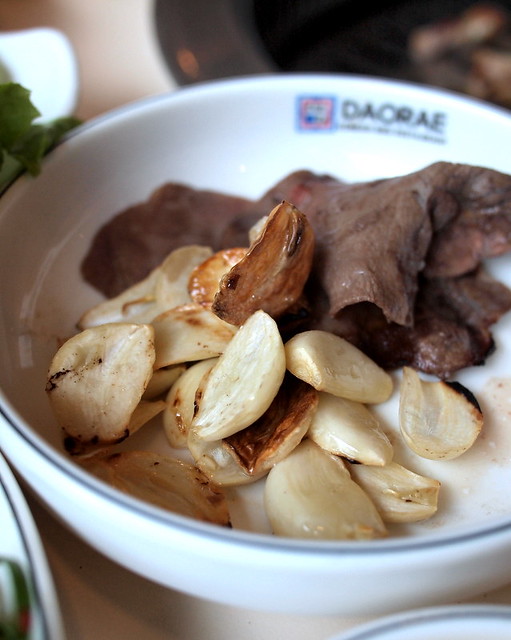 Verdict: The barbecue here at Daorae is excellent. Fairly big portions of fresh, glistening red meats and oh.. the tongue! The bulgogi and the pork belly are to die for as well. I have eaten here on separate occasions and can safely say that, whether the meats are served plain, for dressing afterward in a sheet of sesame oil run through with salt and pepper, with a dash of bean paste, or if it is served in marinades, such as a soy-based number that is almost reminiscent of teriyaki, or a garlicky take on kochujang , the food is great. We love this place and we have no qualms recommending it to our friends.

Walking out of the Lahad Datu bus station just before noon, 4 teenagers sitting on the curb entrance of the station, wearing school uniforms…