To many connoisseurs of great Japanese food, sashimi worship has become a religion. And one of the cornerstones of this faith is the unshakable believe in the fact that the fish is extraordinarily fresh. It doesn’t matter what lengths the place goes through to get the sashimi, but diners trust that the chefs will deliver the merchandise in spades. 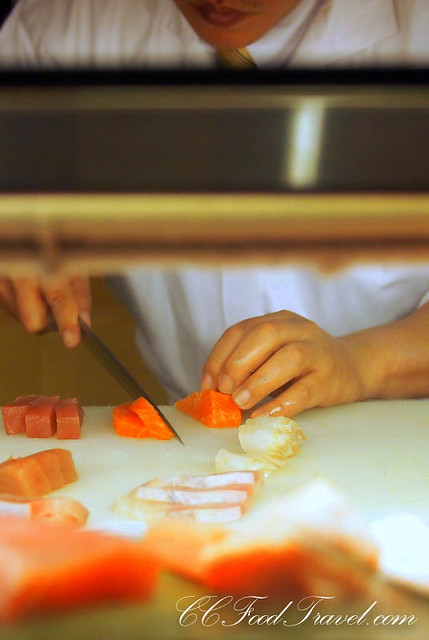 And one of the hallmarks of a great Japanese restaurant is that if the sashimi is not up to par, the place will tell you so. “No, not fresh today”. “Have it tomorrow, when the shipment comes in”, says the Chef. And if the Chef has spoken, so be it. 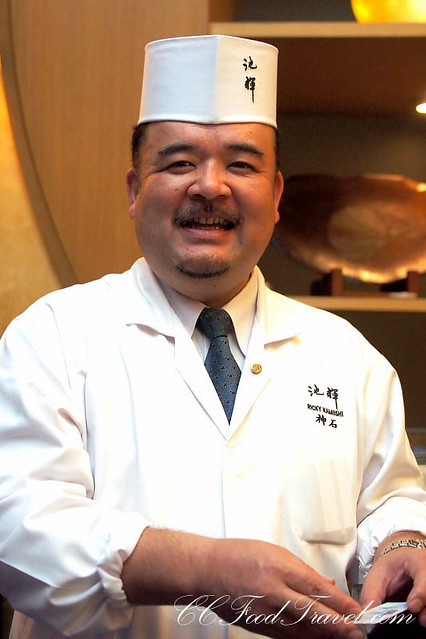 At Iketeru, we don’t really need to think much about what to order, Executive Chef Ricky Kamiishi decides for us, and on the freshest items on the menu as well. How lucky are those, who do not need to order for themselves – theirs shall be the freshest bounty for the sea! And a sea, far, far from home, at that! 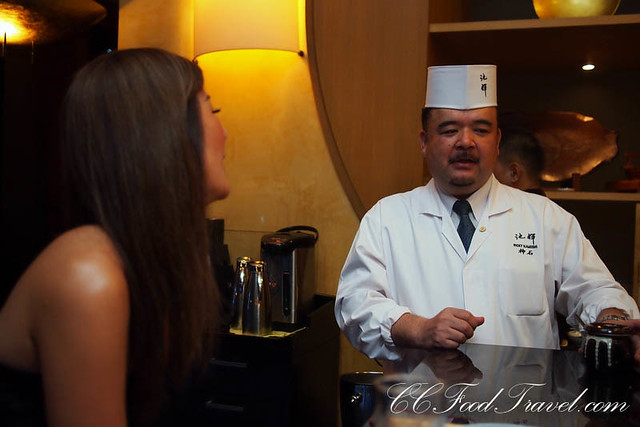 Executive Chef Ricky Kamiishi is adamant we come back (again) tomorrow for the freshest cuts of sushi and sashimi. “Tomorrow is Tuesday, you see” , he tells us. “Tuesdays are when we get our delivery of fish”. 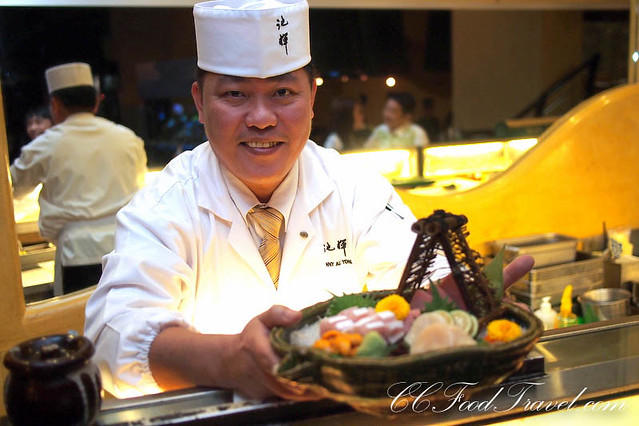 Chef Johnny Au Yong serves up the sashimi he has just carved for us.. and it is exquisite! 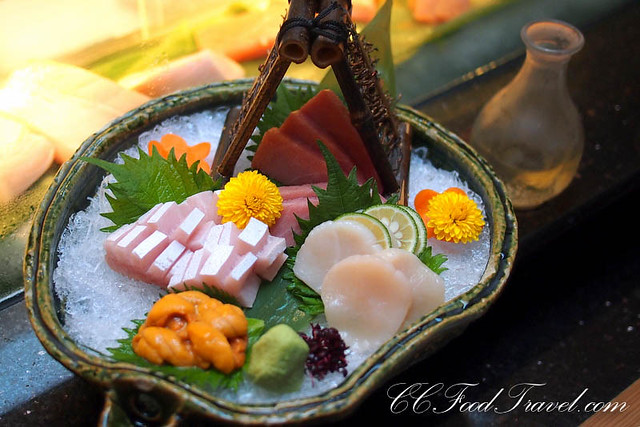 We start off the night with Sashimi of course, ordered by the Chef. Picking up the Otoro, and putting a spot of wasabi on it, then dipping the fish into my soy sauce, I am just happy to let it melt off my tongue. Many folks prefer the meatier chutoro (with less fat) but for me, I am happy to lay the fat on thick. Especially when it comes to the tuna. 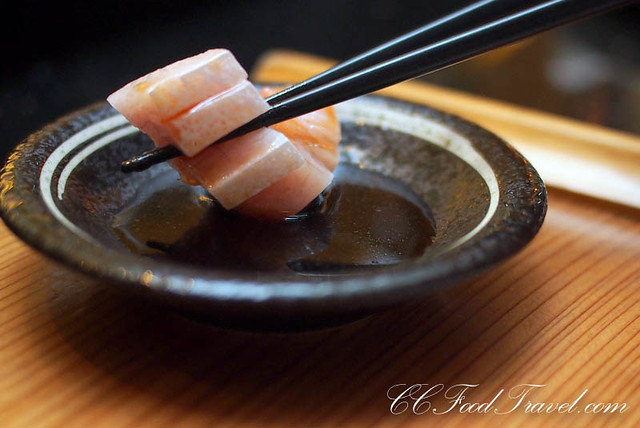 Just a spot of wasabi is added directly to the fish. Don’t go mixing and entire load into your soy sauce .. it spoils the taste 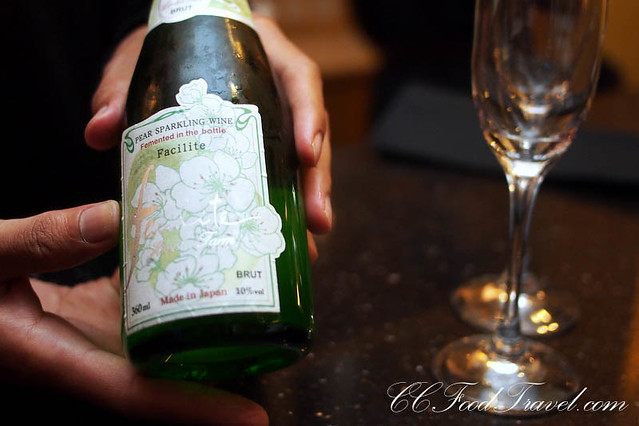 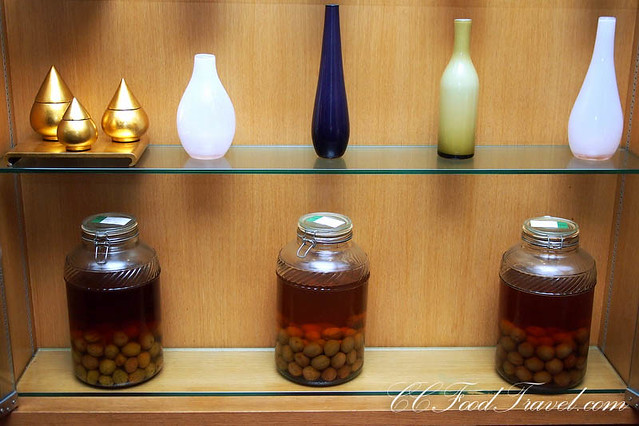 Ume Shu .. made in-house. The middle pot is ready for drinking – you can tell by the color as once it gets lighter, it’s ready to be drunk

One of my other favorites is the shiso leaf, with its pungent mint-basil fragrance. Shiso or a drop of lemon can enhance an oily fish like mackerel or yellowtail perfectly. It also complements the scallop to perfection. 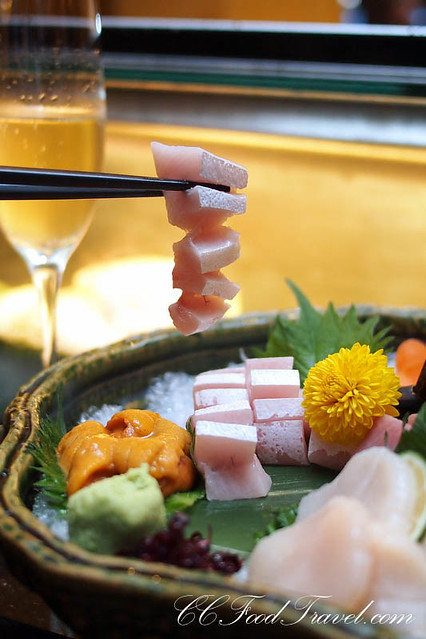 The Uni is also pretty damn awesome. Sea urchins, or, to be precise, their rich, salty, orange gonads, evoke the flavor of caviar, the trembly texture of pannacotta and the briny, slipperiness that comes with eating live oysters. And they have never been better, here at Iketeru. Like foie gras, egg yolks and pork belly, sea urchins have a lusciousness and weight that never fail to make me swoon. The mouth-feel is pure cholesterol. Eat it and try not to weep. 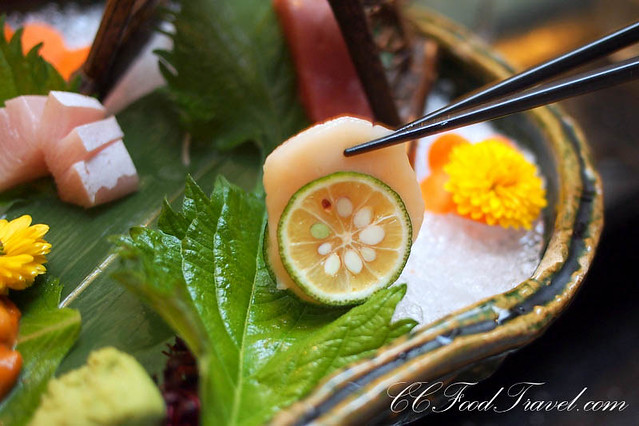 Something else the Chef told us we had to have, was the King Crab. We happily nodded our consent, of course! 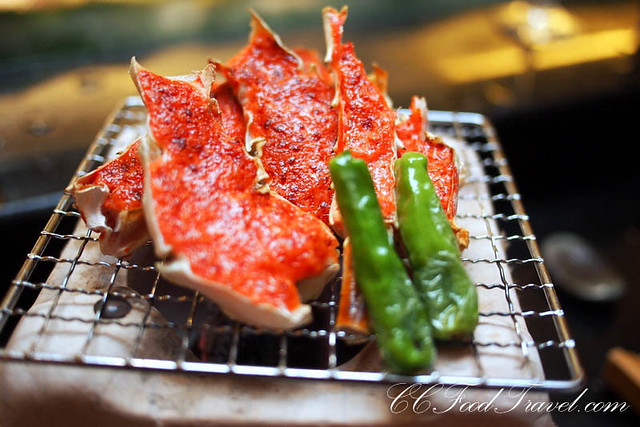 Tarabagani with Mentaiko Cheese ( Red King Crab, marinated in cod roe or pollock roe). Tarabagani or Red King Crab is caught in Autumn and Winter. It is the most coveted of the commercially sold king crab species, and is the most expensive per unit weight. When grilled (robatayaki style) it tends to turn red or burgundy. 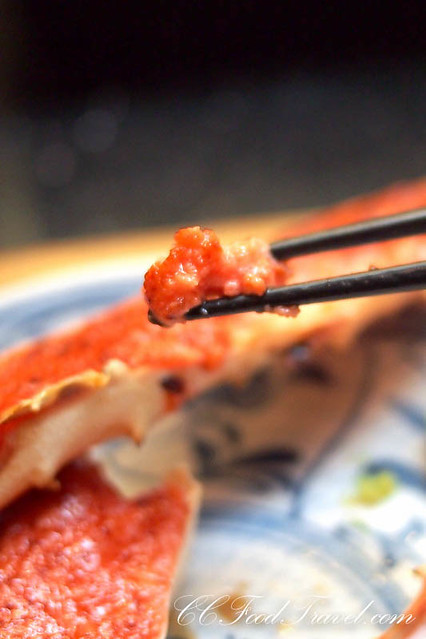 The taste was rich and smooth.. even Cumi licked up every last drop of the Mentaiko with great enthusiasm. 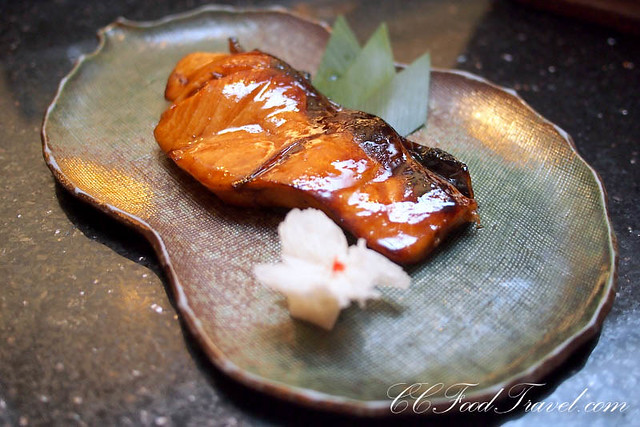 Kanburi Teriyaki – Kanburi is a kind of yellowtail fish caught during the coldest period of the year. It is a fattier version of the regular Yellowtail we are used to. The flesh is also firmer. 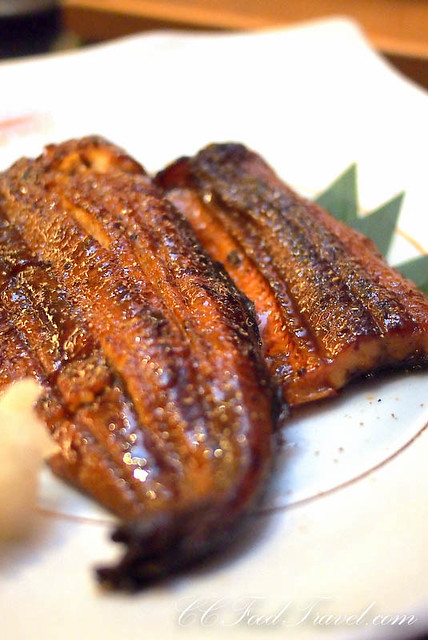 Unagi – We really wanted the Anago, but unfortunately it was not fresh. So Chef decided on unagi for us that evening. No complaints there. The Unagi was divine. 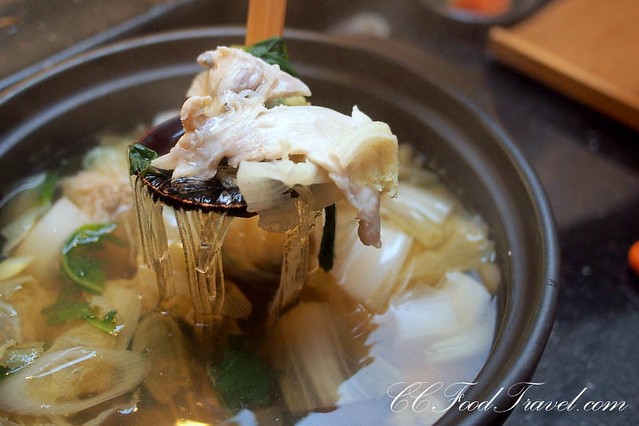 Fugu Nabe – The secret to great nabe of any variety is the ponzu sauce. Nabe is communally served with the pot in the middle of the table. Diners pick pieces with their chopsticks and scoop soft ingredients like tofu with a small strainer made specifically for nabe. You’re supposed to dip the piping hot morsels into small individual bowls filled with ponzu sauce, and this cools down the food as well. 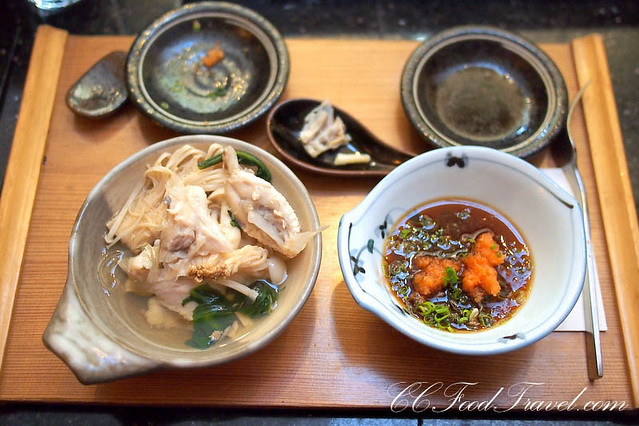 Serve with grated daikon and chopped scallions the Ponzu sauce really brings out the flavor in the Fugu, which to me is actually a rather bland tasting fish. You see, boiled fugu tastes like normal fish, but is a tougher meat in terms of texture. 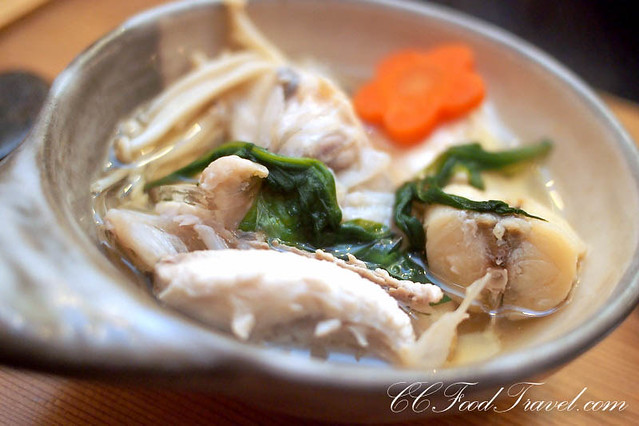 I especially liked the part near the head. It was soft and tender and rather succulent. The hotpot itself was sublime and so was the Ponzu sauce.. one of the best I’ve had in KL.

Has one year really flown by so fast? I remember as if it were just yesterday that I met Debbie Teoh, Nyonya Chef extraordinaire…