It was hard to resists the invite that asked if we wanted to attend a dinner at Samplings on the 14th, hosted by Chef Malcolm Goh.

Would you say no to a celebrity chef, made famous by the AFC production called, Great Dinners of the World? I think not. 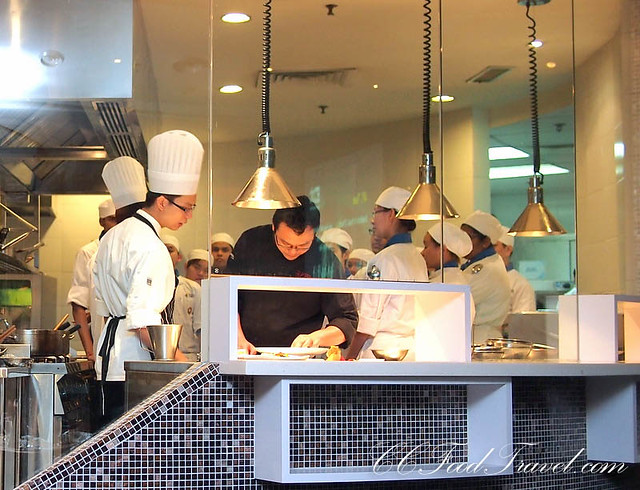 And not to be fooled by Malaysian chef, Malcolm Goh’s mild-mannered demeanor in previous episodes of Great Dinners Of the World and Back To The Streets, he really has an exuberant personality. His outgoing nature and strong passion for food commands the kitchen. Whether he is cooking up a storm in France and Scotland, bringing his dinner guests the flavours of Asia, or visiting local food stalls in the heart of Malaysia before returning to the kitchen to create newly inspired dishes, Chef Malcolm is a true foodie at heart.

And this time, Chef Malcolm is teaming up with popular Malaysian radio DJ and host, Tham Zher Peen, in a brand new program called Back to the Streets which places the hosts in the role of secret agents, going undercover on the streets of Kuala Lumpur, searching for local culinary delights. 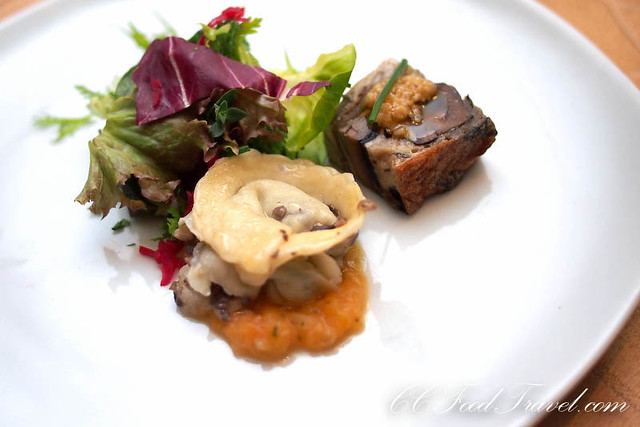 Which brings us to Samplings on the 14th, and a fabulous dinner, hosted by Chef Malcolm Goh. Our first course was a lovely mushroom dish. The meatiness of the marinated portobellos was satisfying, but the aromatic spices and the smoked garlic vinaigrette was what gave this dish its personality. Rumor has it that the tortellini came about centuries ago when an innkeeper caught a keyhole glimpse of a beautiful woman undressing, inspiring him to fashion her navel in dough. Well, then in which case I’m sure he’d heartily approve of Chef Malcolm’s homey yet soulful mushroom tortellini. It was perfectly formed and deliciously al dente. Loved every bite. 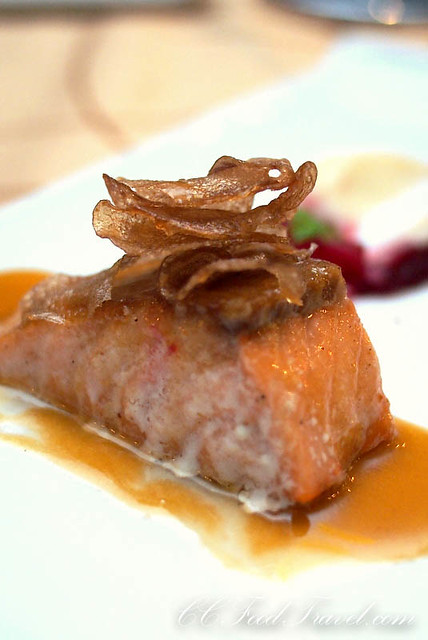 This second course was my favourite for the night. This attractive fish dish relies on delicately curing the salmon to achieve maximum flavour. And though mi-cuit means half-cooked, it still utterly fails to express the decadent texture of the salmon mi-cuit. A combination of heat and salt work in concert to ensure that the salmon is anything but raw. This pair is a marriage made in heaven – the earthy beetroot offsetting the tender cured salmon to perfection. 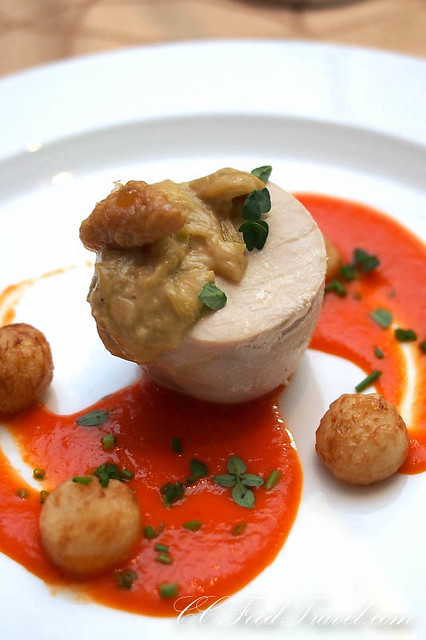 Somebody at my table said, “Why on earth would anyone Sous Vide chicken”.. and before I looked it up, I was inclined to agree too. Anyway, I soon found the answer – What makes this sous vide chicken breast great, is normally, chicken is cooked to an internal temperature of 165ºF, which makes it safe to eat but will also dry out the meat.  By sous vide, the chicken is thoroughly cooked at a lower temperature, therefore still moist. How very clever.

Well, what can I tell you. This dish was memorable enough for its bland taste. Serving sizes had been inconsistent and diners could be overheard passing comments over it. I would have have liked to have had a wine pair with it, and I could have done with a larger portion with a sauce that’s a little more bold. And that crispy bit of skin on top of the chicken that you see.. I would have liked a bigger piece, for sure. Tasted like chee-yau-char (crispy pork skin), if you can imagine! 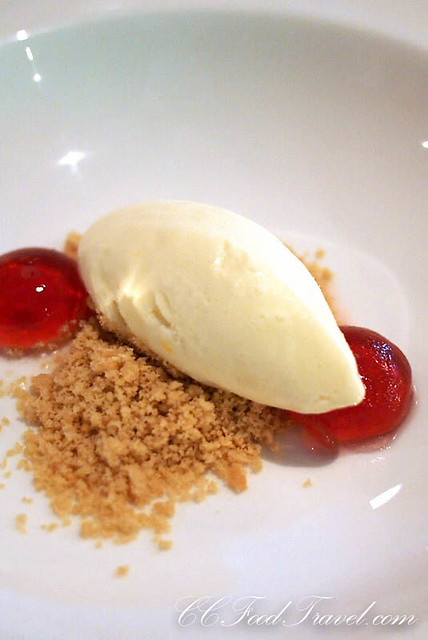 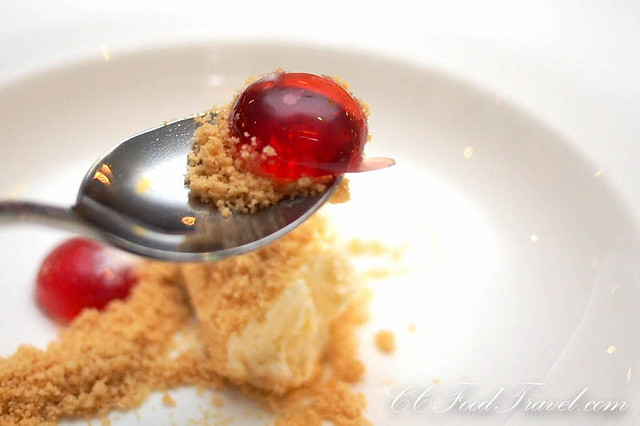 I found this coconut ice-cream just so-so.. but the blackcurrent spheres were the bomb! Lovely, exploding little pockets of tart flavour. Could have popped them in my mouth all evening. 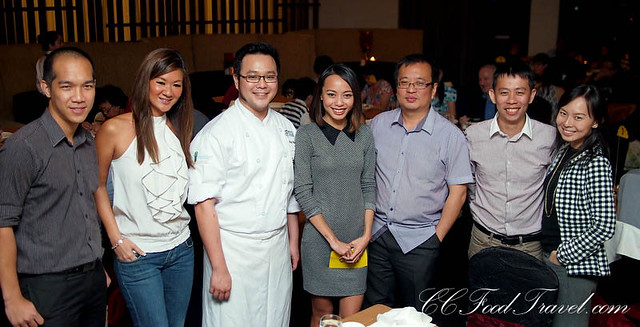 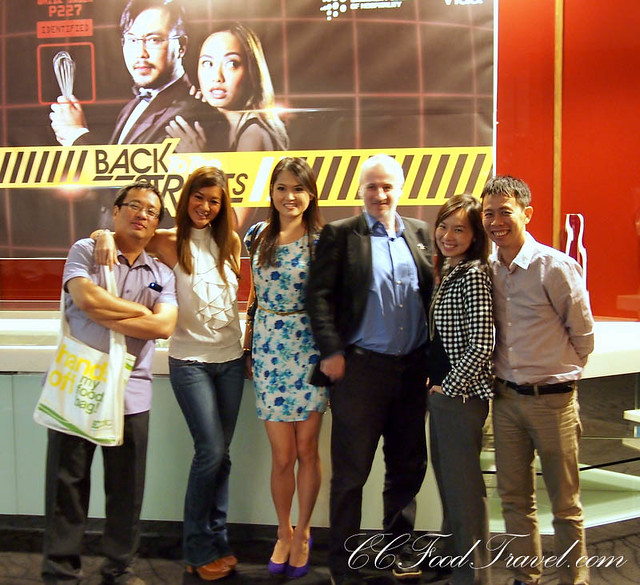 We just got back to KL, and we flew with AirAsia X, Business Class, and all I can say is that, it’s a must…