Chef Frankie Woo’s food is always a delight to eat. And this chef never ceases to amaze me with his knack for coming up with exciting and innovative dishes for Gu Yue Tien. Not only that, the latest trick pulled from this magician’s sleeve was a couple of red, round, magic berries. 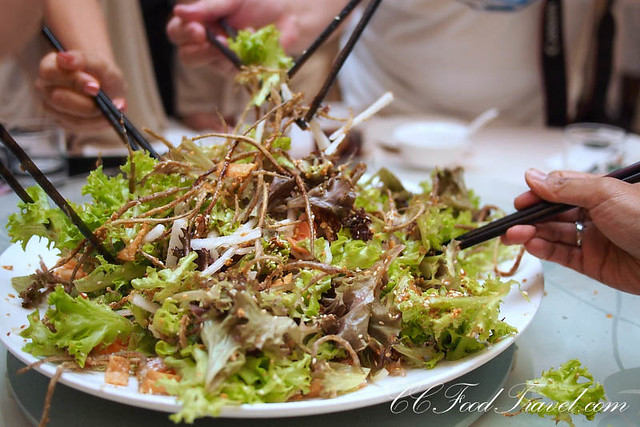 It might sounds like something out of Willy Wonka’s factory, but in fact, Chef Frankie manage to grow it in his back garden after 3 years. A berry that can make everything sour or bitter taste sweet.. isn’t that delightful? Lemons lose their sharpness, vinegar tastes like sherry and a pint of Guinness comes to resemble chocolate milkshake. The Synsepalum dulcificum ‘miracle fruit’ .. just eat the little berry, and it can turn sour lemons into sugary lemonade. And the effects last up to an hour or so. The berry actually contains a protein that binds to the taste buds, temporarily causing sour and bitter foods to seem sweet. How clever! We were about to have this for dessert, but will show you the proof at the end of this post.. 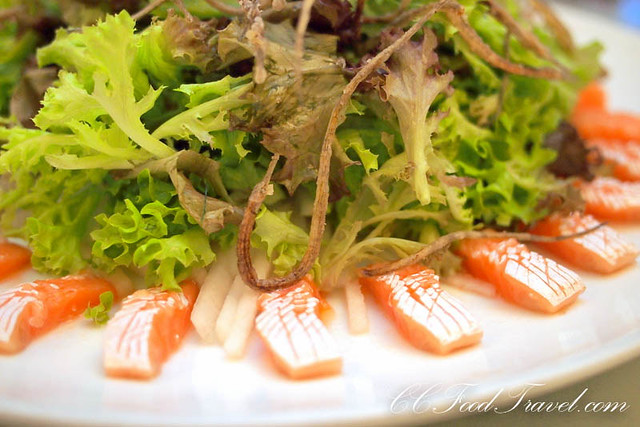 To start of with, The Dragon fish (Pipe fish) Yee Sang – Chef Frankie created the perfect balance in taste and textures, when he brought together in harmonious synchronicity the green coral lettuce, golden raisins, pear, pomelo sacs, salmon sashimi, sesame seed, a special fruit sauce and some gorgeous fatty slices of raw salmon. It’s more like eating a refreshing salad, rather than a conventional yee sang, which made a nice change from the norm.

After the customary Lou Sang, we moved on to some rather contemporary and interestingly plated Chinese dishes. Chef Frankie’s cooking brings a crisp, modern sensibility to Chinese dining that I always look forward to. The first dish that was presented was the Wok Fried Prawn Cake with Strawberry Sauce. It had an unusual east meets west flavour, as the brown sauce and the strawberry sauce collided. I loved the texture of the prawn cake – crispy and juicy all at once. The mushrooms functioned as little pockets that absorbed and mopped up the sauces rather efficiently. 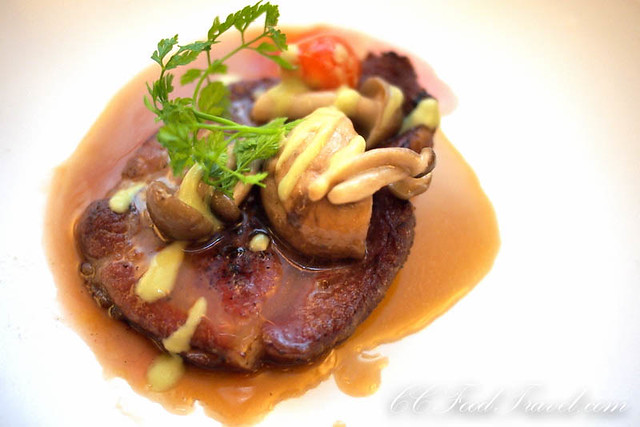 This next dish was a mouth watering Iberico Pork neck with mushrooms and wasabi sauce. Iberico Pork neck when cooked correctly is one of the most tender gourmet delights imaginable. The Iberico pigs feed on acorns which gives the meat amazing richness and it literally melts in your mouth. The pungent wasabi sauce added kick and emulsified the fat, which was nice. 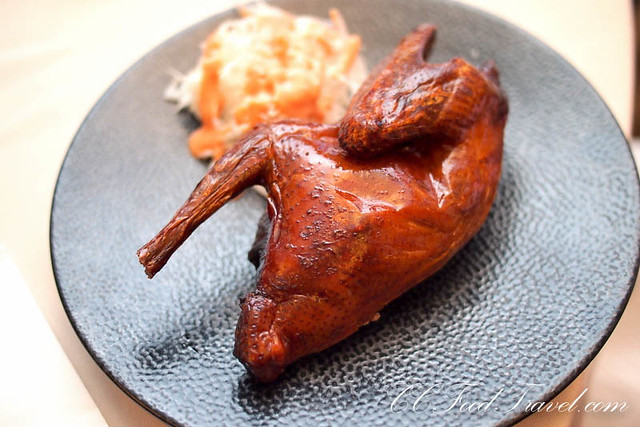 There is much pleasure in a young pigeon.. the skin of the roasted bird with its freckles of black and crispy brown-gold skin; the sweet juices that run from the plump breast as your knife slices through (or your fingers dig in); the little bones to gnaw and suck and nibble. Mad crazy about Gu Yue Tien’s roasted, fried pigeon – nothing comes close to the way this restaurant prepares its crispy birds. 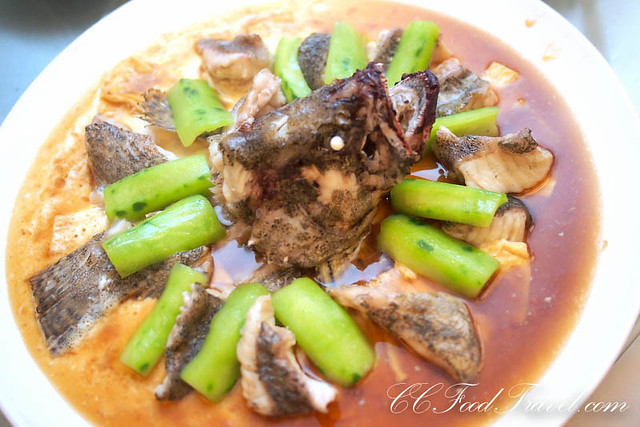 Love it when the restaurant slices up the fish for you. I dislike deboning my fish really – so these perfectly sliced pieces of steamed grouper fish fillets laid on slices of silken bean curd and petola, were a delight to eat. 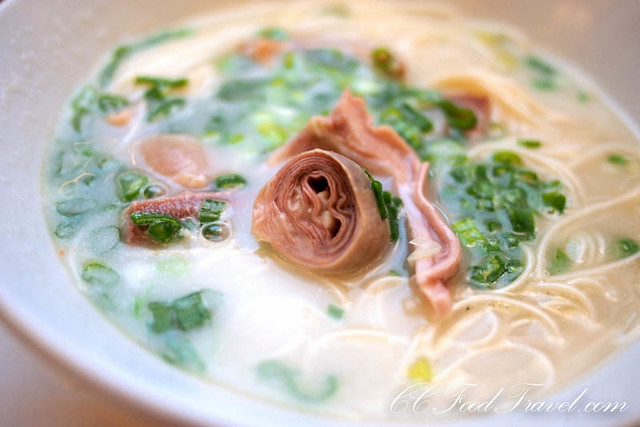 I’ve often heard that boiling a pot of Pig’s Stomach soup is easy. But the part where you need to clean the Pig’s Stomach is the tricky bit. And if you don’t do it properly, you will end up with a smelly soup. At Gu Yue Tien, the pig stomach soup is perfection personified. A thick, creamy, murky soup with a peppery punch that’s near orgasmic, you won’t find a bad tasting morsel in this broth. I particularly love the stuffed intestine (notice the layers) – intestine stuffed into intestine, for the perfect dense mouthful of offal that you can imagine. Hands down my favourite dish for the night. 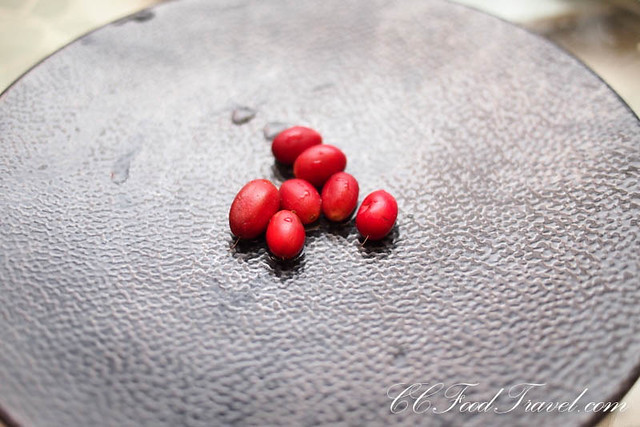 The Synsepalum dulcificum ‘miracle fruit’ –  just eat the little berry, and it can turn sour lemons into sugary lemonade 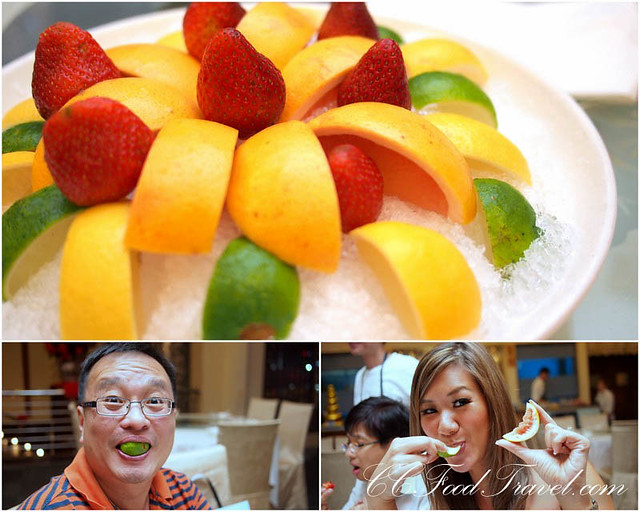 Here you see us, eating these super sour lime, lemons, and bitter grapefruits like as if they were the sweetest honeydews! A fantastic experience.. I would love to be able to grow these magic berries in my own garden.. hmmm.. If Chef Frankie can do it, then maybe I will too!

Have you been to High Tea at Maison Francaise..? Sometimes you go to a restaurant in KL and have a meal, and leave, feeling…